This morning in its briefing to the City Council, Seattle Police Department COO Brian Mazey did its best to  discredit its own “Berkshire report” study of staffing requirements at SPD.

The study, highly anticipated and long-delayed, was quietly released last Friday and Council member Lorena Gonzalez, whose committee oversees SPD, wasted no time in getting it on the agenda for today’s committee meeting.

In his presentation Mazey wasted no time in pointing out that the report is only one component in SPD’s process of deciding staffing levels for the department as a whole as well as across different divisions within it.

He then reviewed the study’s objectives: evaluating the number of sworn officers, balancing patrol and non-patrol allocations, and evaluating staffing for special events. 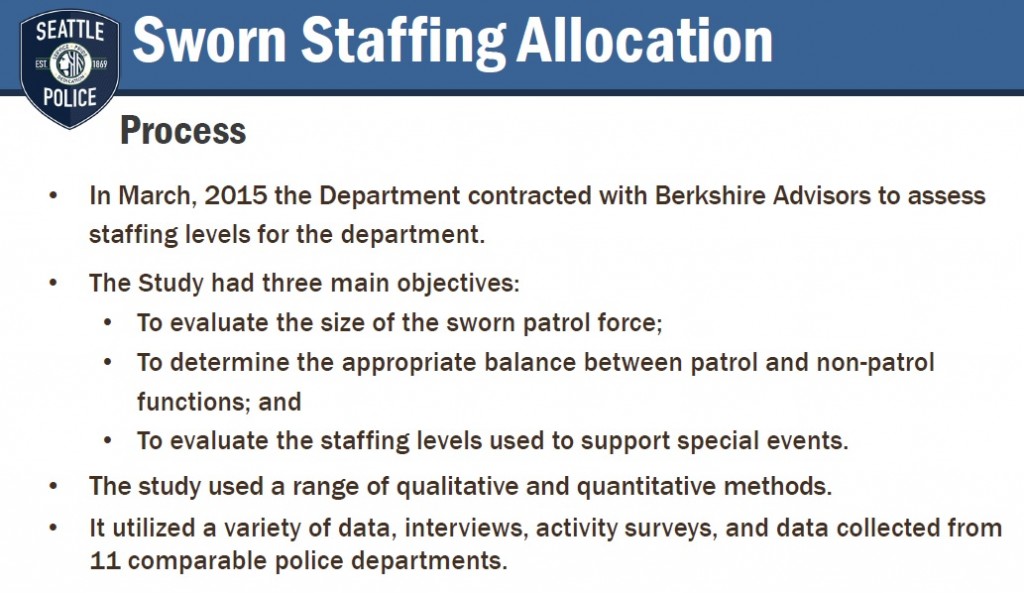 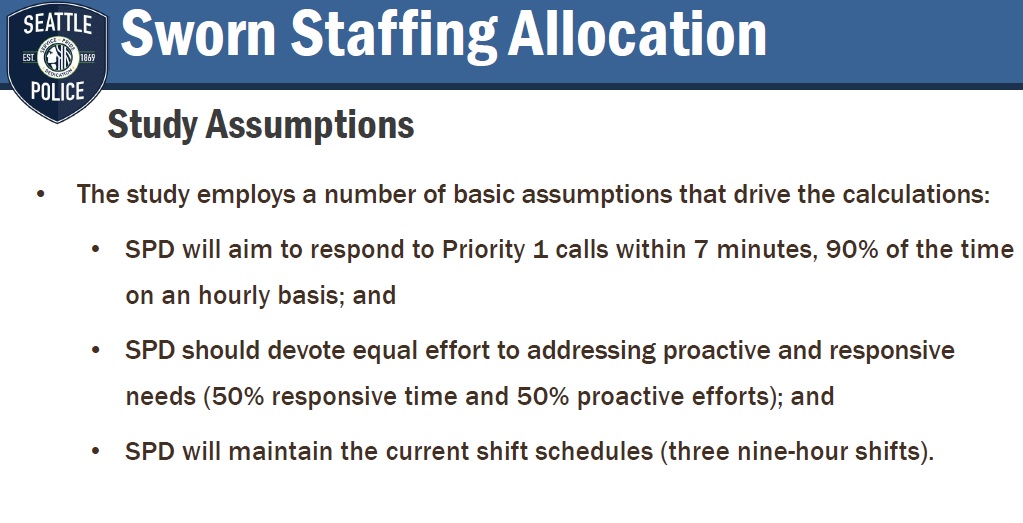 Mazey admitted that the focus on responding to 90% of Priority 1 calls within a specific time limit is a better metric than an average response time, he disavowed any ability to measure this today, because of dirty data and the vagueness of trying to measure it. Earlier this year when he presented on response times, he talked about the difficulties inherent in measuring response time, such as recognizing that some calls require two officers and the call can’t be marked as “responded to” until the second officer shows up, even if one arrives minutes before then. So while raising legitimate issues about the difficulty in getting a good, meaningful measure, he was unwilling to suggest an alternative measure — though he promised that they would “hear from him soon” on what the standard should be. He also pointed out that Berkshire used a snapshot of data from July 2015 and the SPD’s processes have changed since then which, he suggested, render that data either irrelevant or invalid. (ironically if they had delivered the report on time that wouldn’t be the case)

Mazey also took issue with the split between proactive and responsive work, and criticized the report for being unclear on where the dividing line is; for example, whether investigating a burglary is proactive or responsive work. In fact, he said that much of the delay in getting the report out can be attributed to SPD’s staff trying to make sense of the proactive/response split. Mazey noted that Berkshire tried to use definitions that allowed for easy comparisons with other cities.  Council member Gonzalez pointed out that SPD can’t punt the issue, because without a clear distinction between proactive and responsive work it’s difficult to allocate resources to harm reduction programs such as LEAD. City budget director Ben Noble agreed, and offered up what is probably the reason for SPD’s hostility to the Berkshire report: they want to build their own staffing model.

At least some of their reasons for wanting to have their own model are legitimate, and probably the best one is that they want to use it as an ongoing tool to assess needs and reallocate resources more flexibly. Maxey emphasized that as they aggressively hire over the next few years they will need to stop at various points and evaluate how things are going. They also envision feeding a wide variety of data sources into the model from their “data analytics platform” in order to make it higher quality.  But while it’s a wonderful aspiration to have a “real time” model for resource allocation and a rich model looking at a wide variety of metrics to inform those allocations, in practice it’s impossible to optimize a system like that for more than a handful of variable, and people-based systems simply don’t respond fast enough to need real-time modeling. Can they add value by building their own model? Sure. But their aspirations for how much it will help far outstrip the reality of the value it will bring to their decision-making.

Maxey covered the two scenarios that Berkshire explored in their report: Scenario A looks to fill some positions with civilians (i.e. people without the authority to arrest people), and scenario B fills nearly all positions with sworn officers. Berkshire recommended scenario B, and ironically this was one of the few places where Maxey and SPD agreed with them; doubly so because the Council members strongly disagreed. Council member Burgess pointed to both the additional flexibility and cost savings it provides, and noted that it gives the city a better policy approach for how it will engage in police work in the future. Gonzalez and Juarez both agreed with Burgess, with Gonzalez pointing to Anaheim as a city where “scenario A” is working well, and Juarez noting that it is more in tune with a community policing model and supports “upstream leadership.”

Maxey also criticized the report’s method of analyzing overtime, in particular that it chose to express it in terms of equivalent FTEs which he saw as not a useful comparison because it affects many other aspects of SPD operations including reports, HR, public disclosure processing, etc.. According to Mazey, SPD Chief O’Toole is putting in place management controls on use of overtime, while also looking at measures to improve efficiency, such as an easier to use records management system and a review of management practices in order to get officers onto the street for a larger fraction of their shift. O’Toole has ordered an audit of overtime use, and Mazey claimed a report would be forthcoming shortly.

The big takeaway was that, in spite of differences in models for how allocations should be made and who should fill various positions, the study makes it clear that the city needs significantly more officers. Noble noted that hiring needs to start now, even before all the tools they want are in place. Maxey claimed that SPD has netted an increase of 55 officers since 2014, but all agreed that there is still a long way to go. Council member Herbold voiced her appreciation for SPD bringing the report to them now even without all the answers, because it helps to demonstrate to the community the need for many more officers. Council member Gonzalez seconded that sentiment and asked Maxey for regular progress reports.

Mazey also emphasized (as he has before) that they want to have an “agile model” to drive their changes in staffing.

Burgess summed up the session by making several points. First he said that he found the report very informative, particularly the comparisons with other cities, but that it “suggests that we have work to do.”  He also noted that Chief O’Toole inherited a police department that “did not have good management systems in place,” and that it won’t be solved overnight. He saw the Berkshire report as proposing a “framework” that can be personalized to Seattle and enables policy choices on “how we want to go about policing Seattle.”

Burgess also pointed to the “tough decisions” coming up in the fall when the 2017 budget will need to find a way to fund an additional 100 officers.  But he emphasized that the report is “a great contribution” to the ongoing conversation and will help to drive the changes that he thinks both SPD officers and the citizens of Seattle want to get to “effective policing, efficient policing, and constitutional policing.”

Gonzalez got the last word, agreeing with Burgess’s points and adding that she hopes SPD can use the additional staffing to help diversify the police force so that it better represents the community it polices.

Where does that leave things? The report is out now; SPD has largely disavowed it, and wants to focus on building its own model with the blessing of the city’s budget director. The City Council has not yet lifted its proviso on funds for hiring additional officers; the Council members will need to discuss among themselves whether this report, which demonstrates the need for more officers, is sufficient to release the funds or whether they want to see a real plan that SPD is willing to “own.” Meanwhile, SPD needs to continue hiring additional officers under its existing budget, and provide regular progress reports to the Council on that effort. It also needs to finish its own data analytics platform so it can build its staffing model as it promised today — though without a timeline for delivery. 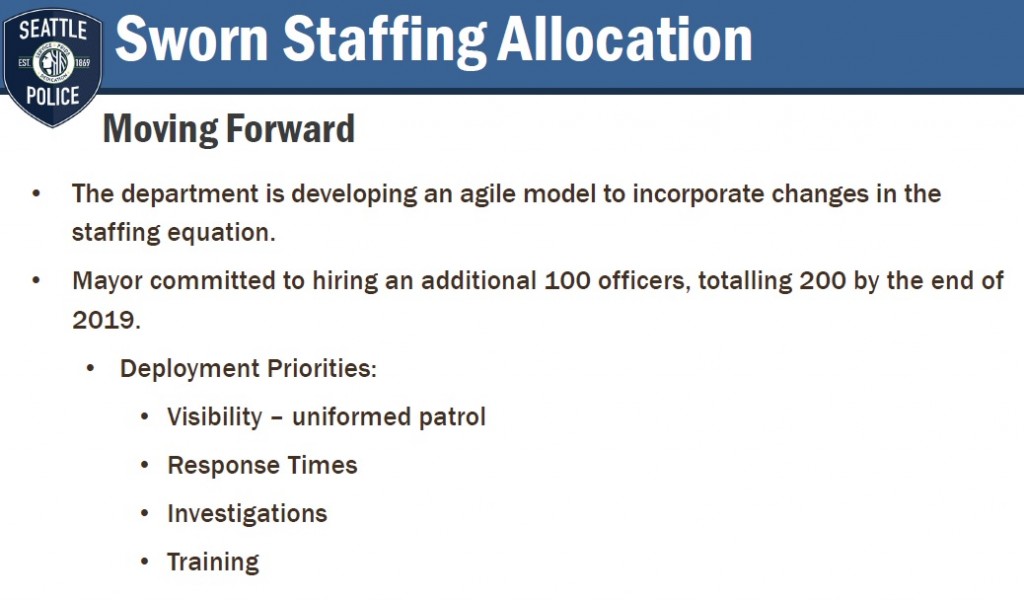 SPD is making big promises on what it’s going to do over the next few years. Stay tuned to see whether they can deliver, and how much faith the City Council has in their ability to do so.