Last Thursday afternoon while nearly everyone was awaiting the great unveiling of the Sound Transit 3 plan, the City Council was getting a briefing on the Mayor’s proposal for the 2016 Housing Levy.

Much of the presentation to the Select Committee on the 2016 Housing Levy was pretty wonky, diving deep into the numbers — not only what the levy funds are to be used for, but the smorgasbord of county, state and federal matching programs and the restrictions on how those funds could be used.

There was a lot of good news, particularly in looking back at the history of the levy and the successes the prior versions have had. 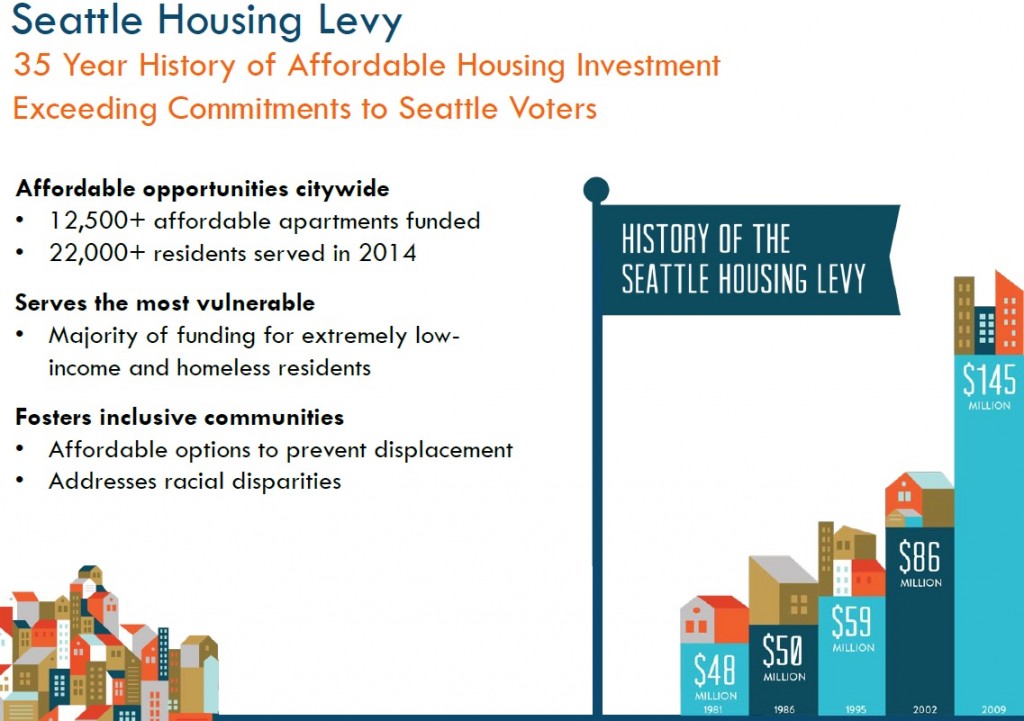 The size of the levy has risen dramatically over the years (and it proposed to double again, to $290 million over seven years) but at the same time the results are impressive, funding over 12,500 apartments over the program’s history. 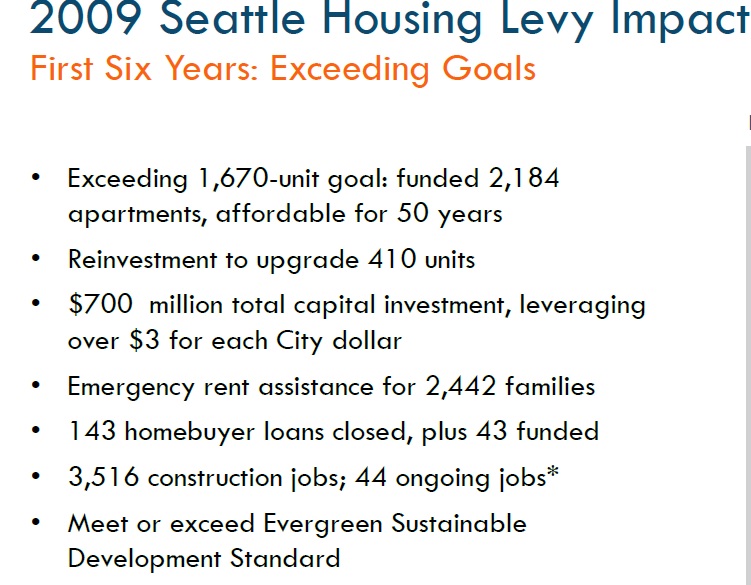 The Office of Housing doesn’t own the housing directly; it fund other organizations to create and manage it. But in the process they extract binding commitments to keep apartments affordable for 50 years, which is pretty incredible. All that apartment construction and maintenance has created a lot of jobs as well.

The Mayor’s proposal for the 2016 levy would double the amount raised, distributing it across the same programs. It would cost the owner of an average-valued home $122 per year in property taxes, about $60 per year more than they currently pay. 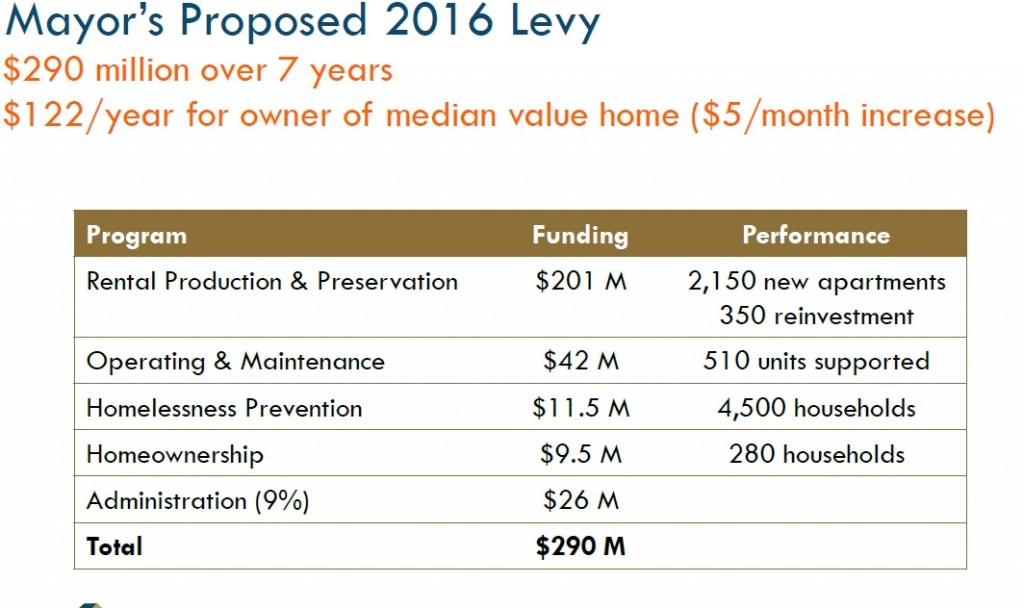 The centerpiece of the program, receiving more than two thirds of the funds, is the rental production and presentation program. 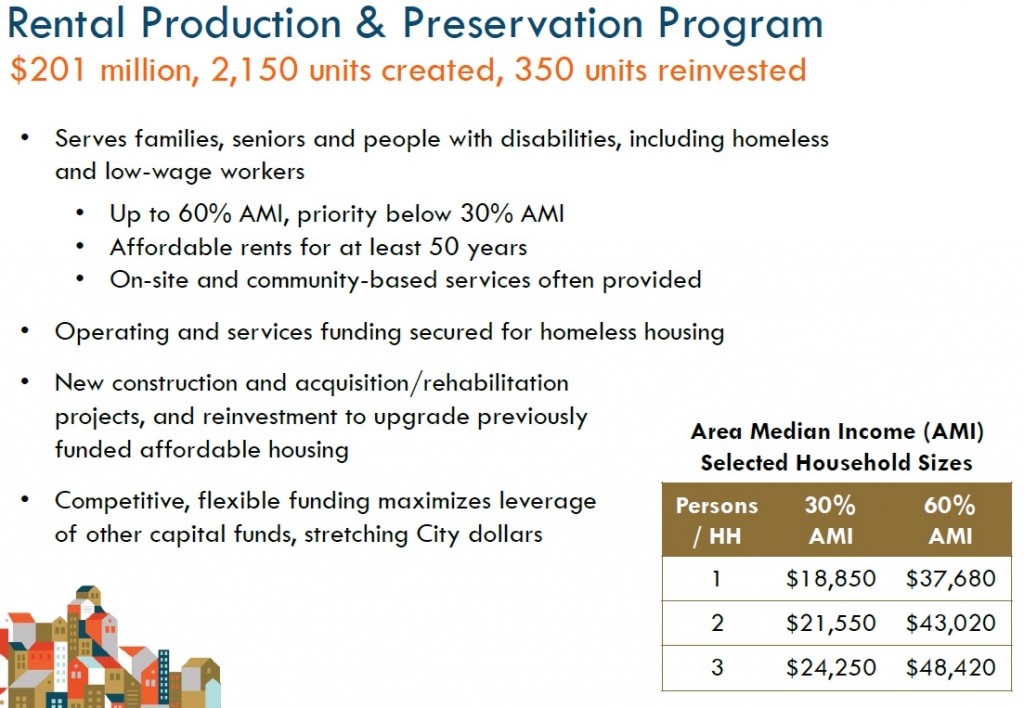 The Council members noticed that even with the additional funds the number of housing units created isn’t increasing; the Office of Housing presenters explained that is the result of both increased construction costs and a dramatic decrease in the availability of matching funds.

The Homelessness Prevention Program also gets a boost, and it should almost double the number of households assisted to around 4500. 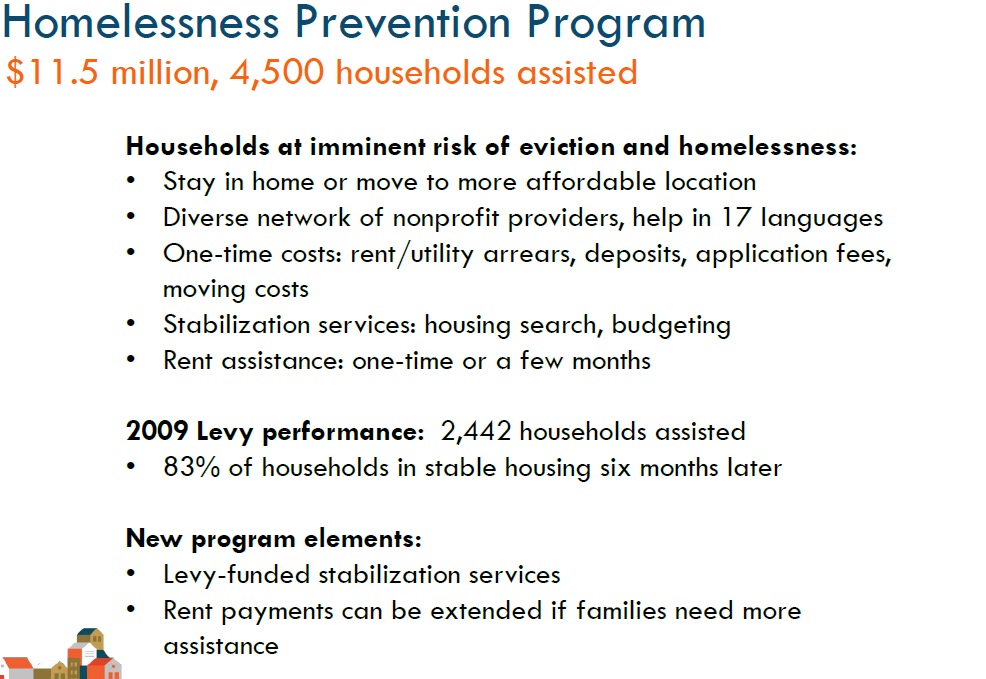 What is truly impressive about this program is the outcome: since 2009, 83% of the 2442 households assisted remained in stable housing six months later.  The Office of Housing doesn’t have longer-term data but hopes to study that in the new levy program.

The most controversial program is the homeownership assistance program. It provides help to first-time homebuyers in two ways: in the first, it loans money to low-income families for down payments on a mortgage. There are 590 active loans, and another 300 that have been repaid — with the repaid funds recirculated back out as new loans. In the second program In the second program, loans are granted for the same purpose, but instead of having to repay the loan the buyer agrees that when they eventually sell will do so at an affordable price. The problem with the program is that it’s low volume; it doesn’t help that many households. But on the flip side, there are so few apartments with 3 or more bedrooms in the Seattle rental inventory that home ownership is the only practical option for a family that needs more than two bedrooms.

Council member Gonzalez hammered hard on this point: that across the levy program as a whole, the city needs to be providing more housing for families. She noted that she hears all the time from Seattle residents that there is a critical lack of affordable housing for families. That can be a mix of rental and homeownership, and it may be easier for the rental program to fund the creation of 3-bedroom apartments particularly given how tight the home sales market is right now.

The homelessness program is tuned towards efforts that are proven to work: providing permanent supporting housing for people with disabling conditions who are some of the hardest to house; prioritizing help for households earning less than 30% of the annual median income; and providing emergency intervention to prevent people from entering the homeless system in the first place at the moment they are about to lose their current housing. 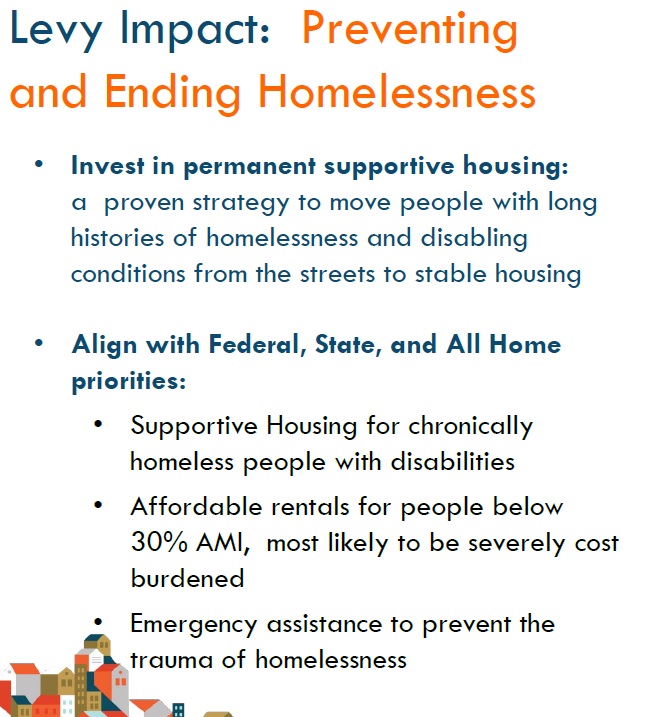 The rental and home ownership programs have targeted projects all over the city, with concentrations along major transit routes and in neighborhoods identified as being at high risk of displacing low-income residents due to rising housing prices. 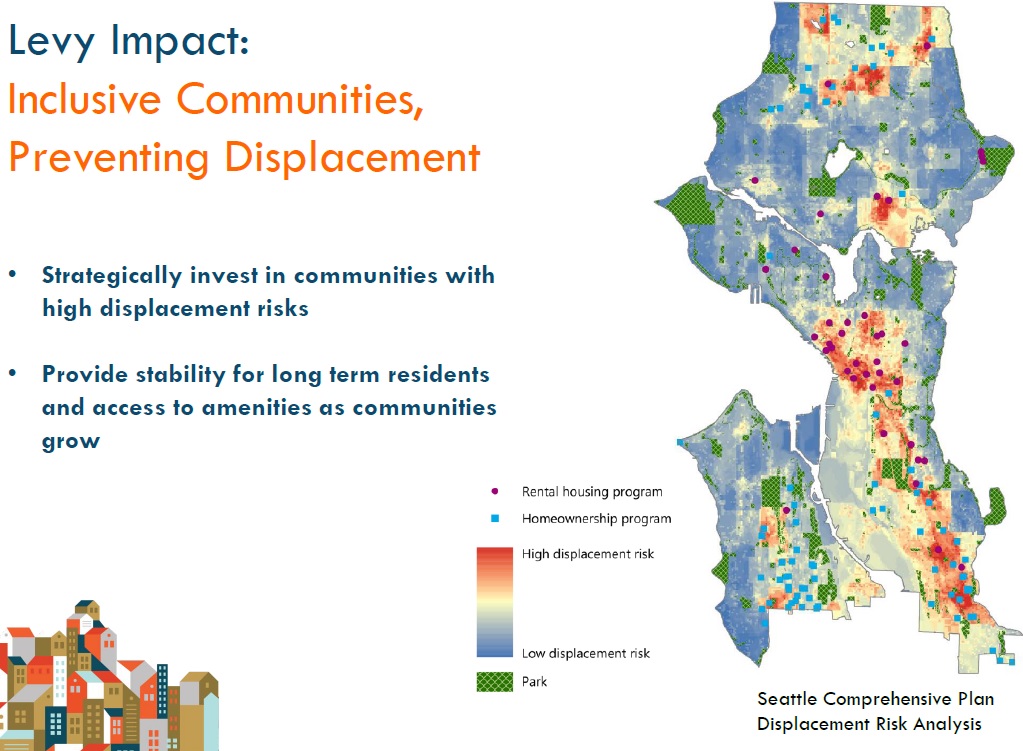 The Council members were clearly impressed with the quiet, largely unheralded impact that the current housing levy is having. $290 million is a lot of money, however, particularly in the context of the proposed Sound Transit 3 levy, also headed to the ballot this fall.  The members seemed concerned about the home ownership program’s lack of scale but at the same time felt the need to create more family-size housing units. Expect more debate about that.

Committee chair Burgess announced that their next meeting will be on April 1, and on April 4 at 5:30pm there will be a public hearing on the Mayor’s proposal for the levy.