This morning at the Seattle City Council’s briefing session, Council member Kshama Sawant passed around a letter for her colleagues to sign that urges the US government to stop pursuing deportation of a man named Francisco Aguirre. Like many of the Council members,I had never heard of him, so I decided to look him up. What I found is complicated and nuanced, and more than anything else shows why we will never have a simple path to immigration reform.

Here is how his attorney described his childhood:

Juan Francisco Aguirre-Velasquez was born in El Salvador on April 12, 1979.  While still a child, he came under the control of the military in El Salvador, who tortured and threatened to kill him if he did not assist them.  Because of his treatment there… he left El Salvador and went to Mexico, however he was not able to work legally there, so he returned to El Salvador in 1997.  He found a job there, but one day a few months after his return, he received an envelope containing a shoe lace and a scrap of paper on which was written “To die by a bullet would have been better than to live in torture.”  Fearing for his life, he made his way out of El Salvador, ultimately crossing the border into the United States in June, 1997.

But that doesn’t even begin to do justice to what happened. Here is an excerpt of what he wrote in his asylum application: 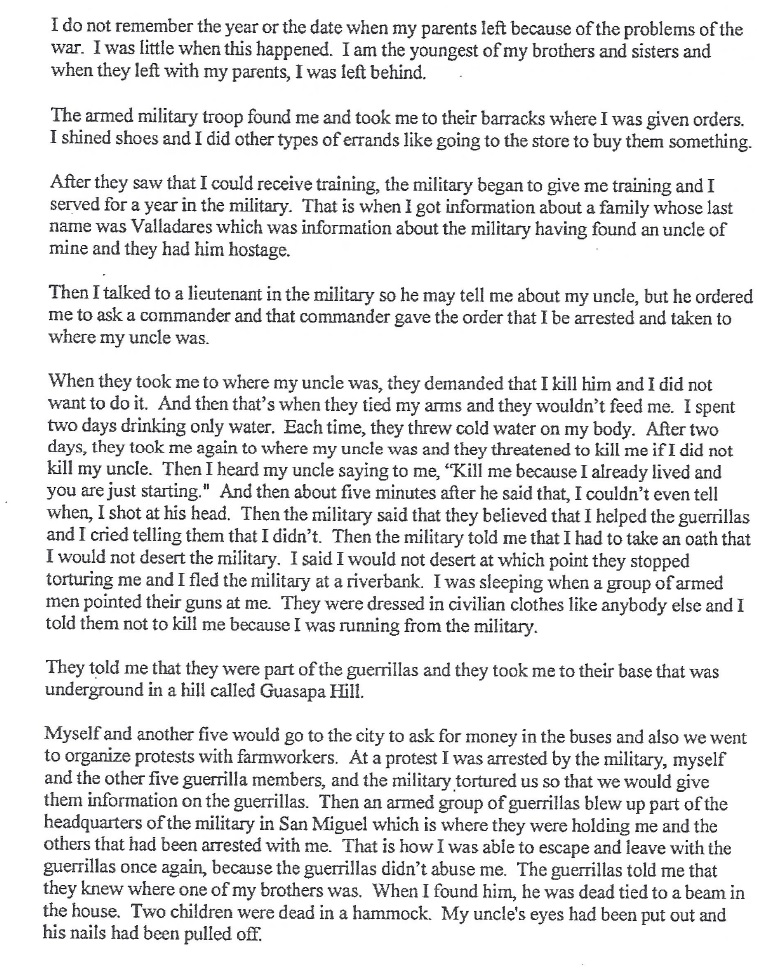 After crossing over illegally into the United States, he eventually made his way to Portland, OR, where he fell in with the wrong crowd. In January 1999 he was arrested on charges of possession and sale of controlled substances. He originally pled guilty on two counts, later changing his plea to “no contest.”  Because he was in the United States illegally, the next step in his legal process was a deportation hearing in front of an immigration judge. Rightfully fearing for his safety if he returned to El Salvador, he applied for asylum in the United States. But his drug convictions made him ineligible for asylum, leaving the immigration judge to have a difficult conversation with Aguirre about his two other options: either deportation back to El Salvador, or remaining in jail in the United States. From the hearing transcript: 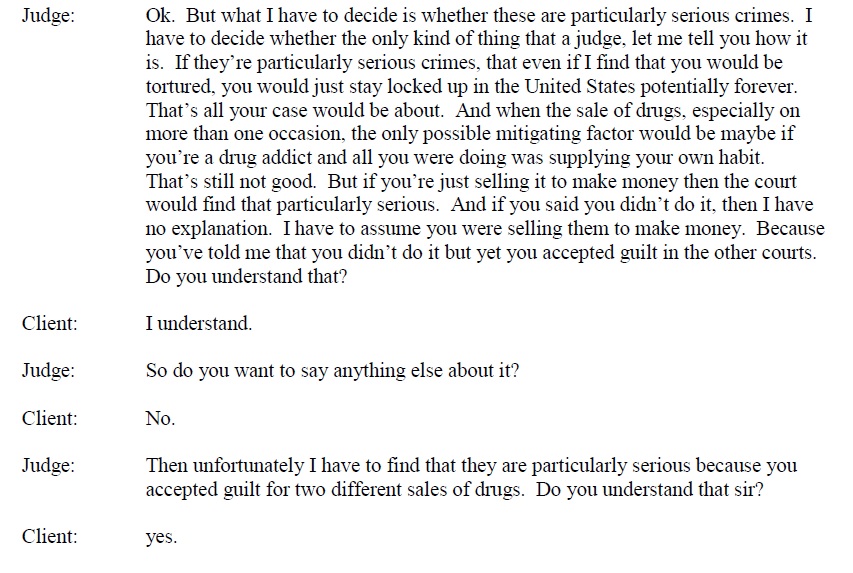 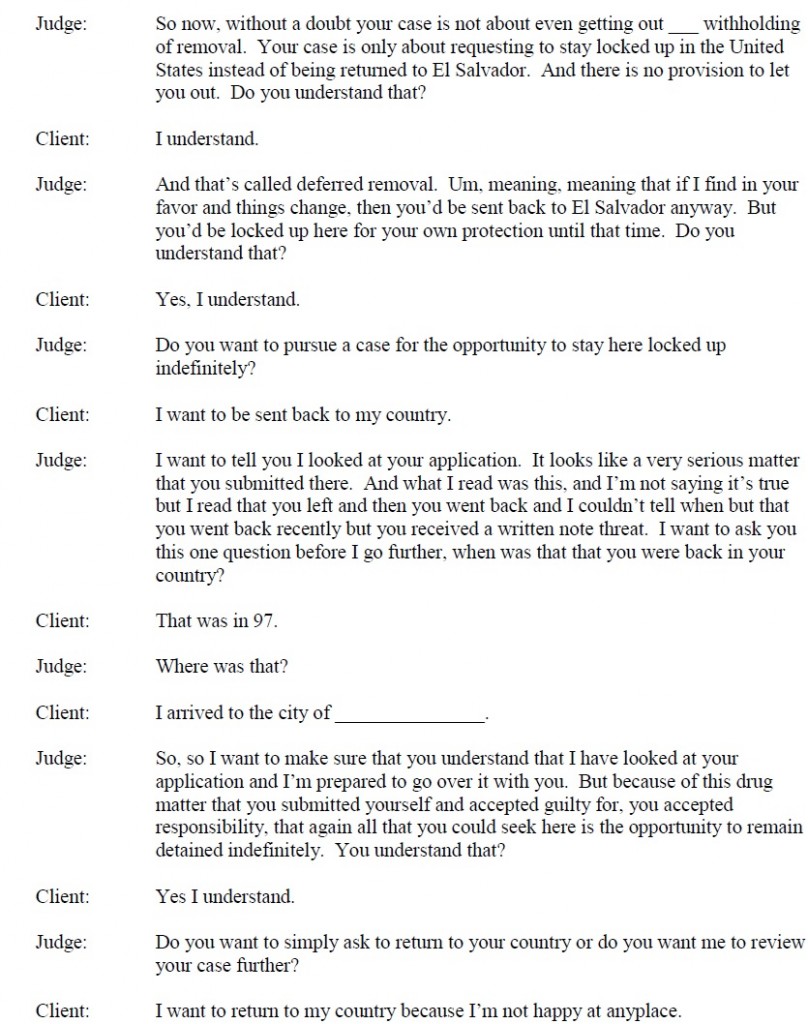 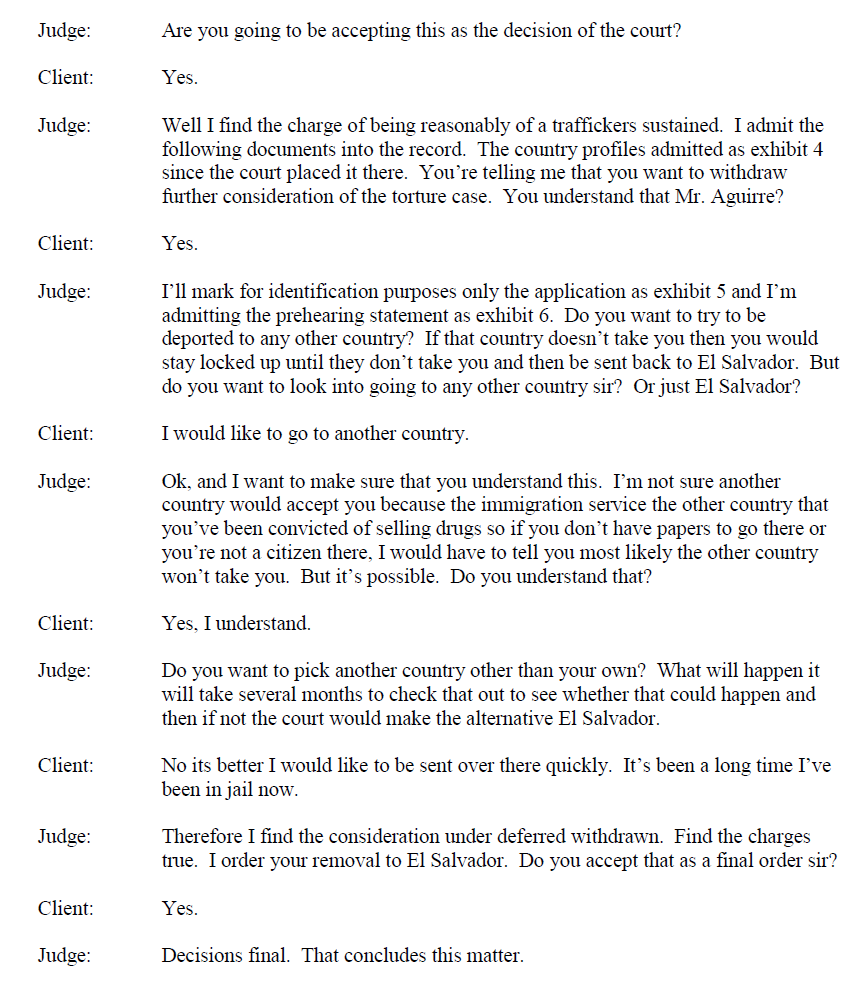 (for completeness, I should mention that this hearing was conducted using an interpreter for Aguirre — though he has never raised that as a concern)

Importantly, Aguirre decided that he would rather be deported to El Salvador immediately because he did not want to be in jail any longer. He was indeed subsequently deported; shortly afterward he crossed back over the U.S.  border and returned to Portland — where he has remained ever since. He reformed his errant ways, married, had kids, (his wife and kids are U.S. citizens) and became an upstanding member of his community. He manages a center that supports immigrant day laborers and has become an important community advocate for the rights of immigrant laborers.

In August of 2014, Aguirre was arrested for DUI, with a blood alcohol level of .12 (.08 is the legal limit in Oregon). That arrest caught the attention of the U.S. Immigration and Customs Enforcement, who in September obtained a grand jury indictment against Aguirre for illegal re-entry into the country — a felony. They attempted to take him into custody at his home, but were unable to present a warrant for his arrest and Aguirre refused to hand himself over. When the ICE officials left, he sought asylum at a local Lutheran church known for providing refuge to illegal immigrants in such circumstances, knowing that law enforcement officials rarely will enter a church to arrest someone. But in November when Aguirre went to court for a hearing related to the DUI charge, the ICE officers met him there and arrested him. The next day District Court Judge  Janice Stewart ordered him released pending the start of his trial in January (2015).

The last 15 months have been spent in a series of pre-trial motions and hearings. Aguirre’s attorneys have moved to have the illegal re-entry charge dismissed on the grounds that the judge in his original deportation hearing gave him wrong information. At issue is the judge’s suggestion that if Aguirre chose not to be deported he would most likely be jailed indefinitely in the United States with no recourse for release; two years after that hearing, the Supreme Court ruled that indefinite detention in these circumstances is unconstitutional. But Judge Stewart ruled in October of last year that since the immigration judge’s description was a correct interpretation of the written and case law at the time he said it, the deportation hearing was valid. This is a huge blow to Aguirre’s case, and now the trial (on the illegal re-entry charge) is scheduled to begin in June. It likely won’t go well for him, and then we will have two drug trafficking convictions, a DUI, and a felony on his record.

Aguirre is reportedly applying for a U visa, a nonimmigrant visa for victims of violent crimes who are willing to cooperate with law enforcement to investigate and prosecute the crimes. However, it’s unclear whether he qualifies.

Aguirre has many supporters in Portland who attest to his positive role in the community, including the Mayor himself. And his cause has also become a rallying cry for broad immigration reform, badly-needed and yet seemingly impossible in the current divisive political climate in Washington D.C. Aguirre wants to stay in Portland with his family and continue to support immigrant laborers.

But while Francisco Aguirre is no devil, he is hardly a saint. His case brings to the forefront all of the pertinent issues in the immigration debate. Do we break up families? Do we deport people convicted of serious crimes? Do we respect the rule of law? Do we make exceptions for people doing good in the community? How permissive should our asylum policy be? Who should be prioritized for legal immigration? When do we send a message, and when do we look the other way? And when we look the other way, are we still sending a message?

There is nothing easy or simple about this case. Aguirre seems like a good man with a bad past. But he is in the United States illegally, after being deported once already. He chose to come back, knowing full well that it was illegal and what the consequences were, settled down and created a family. But it’s also true that he is a man without a country, likely to be killed if he returns to El Salvador and unlikely to be offered asylum by any other country due to his criminal record.

“Let everyone in” is not a workable immigration policy. “Kick everyone out” isn’t either. We are groping around in between those extremes to find something that works for our society, our economy and our consciences, and Aguirre’s case show how hard it will be for us to draw a clear line — perhaps ever.