This morning, the Gender Equity, Safe Communities, and New Americans Committee was briefed by the City Auditor on their recently-released audit report on the Seattle Police Department’s use and management of overtime.  I wrote on the report when it was first released, and much of today’s discussion is a repeat of that, so I won’t give a blow-by-blow report. But here are my notes of things said today that provide new points or “color commentary” based on the Council members’ interpretation of what they heard.

The audit report is here, and their presentation slides from this morning are here. You can watch the video of the briefing here.

The “big picture” view was expressed by Robin Howe, the auditor in charge of the audit project, thusly: the SPD overtime spend in 2015 was 58% over budget. The year before it was 52% over budget. It has been steadily climbing since 2010. 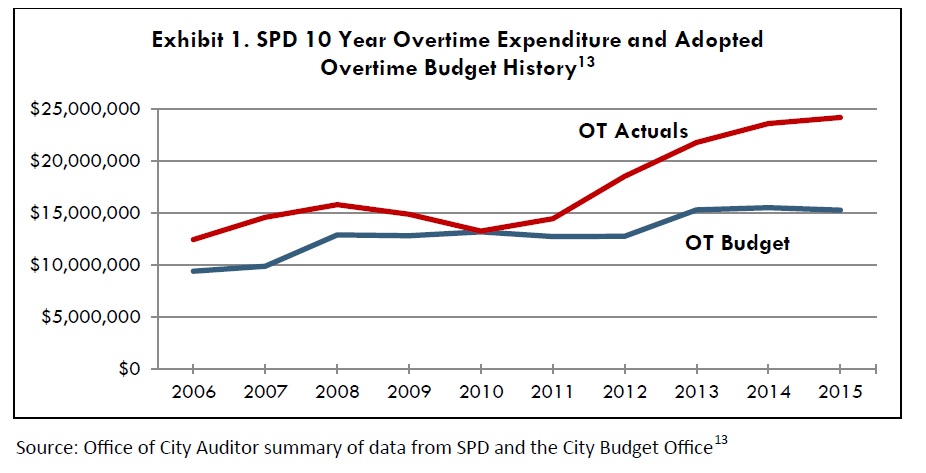 The huge overrun has two root causes: the budget doesn’t meet SPD’s needs for the services they are providing, but SPD is also overspending because of a complete lack of controls, procedures and policies to manage overtime. City Auditor David Jones used an analogy to describe the situation: “It’s as if you didn’t do any of the regular maintenance on your car, and then you bring it into the mechanic and you get a big bill… you’ve got to take care of the basics before you get to a realistic spending level that you can benchmark on.”

Howe reported that several of the SPD captains told her that they see the budget as “just political” because at the end of the year the city just grants them supplemental budget to cover the overrun. “They believe,” Howe explained, “that at the end of the day they are going to get whatever they spend.”  Council member Burgess responded, “That’s our fault, because for years the Council has followed that practice.” Howe: “And they all know that.”

Howe’s team found over 400 duplicate payments for hours worked in 2015, worth about $160,000. SPD didn’t have anyone looking for errors, and since they do scheduling and timekeeping by hand, physically distributed throughout the department, no one is checking before payment requests are submitted into the city’s payroll system. SPD now has hired a temp to look for these kinds of errors, and they are now rolling out a new scheduling and timekeeping system that is a standard system in many of their peer police departments in other cities.  Howe’s team was alerted to the issue because some police officers self-reported getting paid twice for hours they worked. Many others undoubtedly knew they were overpaid because of the spike in their paycheck, but didn’t report it. SPD is now working on trying to reclaim the overpayments.

Howe recommended that SPD have independent monitoring of overtime, separate from the sergeants and captains who approve it today for their own teams. The audit team saw overtime interleaved with sick time, where for example someone regularly worked overtime two days a week then took a sick day every week or other week. “That’s probably someone trying to work the system” Howe suggested. Further, for special events the officers (up through lieutenants) need to sign in and out on special forms which sergeants then approve; this obviously flagged a question about lack of independent oversight and possible abuses.

Special events, the largest category of overtime work, has its own set of issues. A big chunk of the event work is “reimbursable” by the organization putting on the event. Many cities bill for police services in advance based upon an estimate of the needed services, then reconcile after the event; but Seattle bills after the event, and that has left the department with  many delinquent customers: not the big ones such as the Mariners or Seahawks, but many smaller organizers and one-time events. Upon reading that in the report, Burgess asked SPD for a list of the delinquent accounts. “It’s fascinating who owes us a lot of money,” he said, noting that “a lot of federal agencies owe us money.” He also pointed out that there is not a good system in place for when SPD sends those over to collections, or to the City Attorney’s office to “go after them civilly to get that money.”

Howe noted that all of the peer departments they compared to SPD had better control over off-duty time worked by police officers. “Some of them had total control,” she noted. “You have to contract with the city.”

Burgess had an eloquent summary of the overall situation and the department that SPD Chief O’Toole inherited:

“The use of overtime is not the only clue that we’ve had that she inherited a police department that frankly, from a management perspective, was a mess. We’ve cited the IT problems they’ve had, the lack of data. You’ve pointed out in your report that overtime records are not centralized, they’re kept in various units. Going all the way back to the Department of Justice report, one of their main findings was that the management oversight and accountability in the police department was essentially absent. And we see it here as well. So I think we all have responsibility for that. Chief O’Toole inherited this department and she’s starting to do the things necessary to introduce modern management accountability protocol systems that hopefully will reduce these kind of reports that we’re getting. And that’s not going to happen overnight. It takes time to redirect an organization and a bureaucracy of this size.”

It’s worth reiterating that SPD Chief O’Toole asked the City Auditor to audit the department’s overtime practices, which rarely if ever happens and shows her commitment both to transparency in SPD and to improving the department that she inherited. And SPD has accepted without argument all 30 recommendations in the audit report.

Both Council members Bagshaw and Gonzalez want to see progress quickly on those recommendations. “I find this frankly embarrassing,” said Bagshaw. “When are we going to hear from the Police Department that they have addressed these? I’d really like a timeline, the scope of the work, a budget… One of my least favorite statements around the city is ‘it’s a work in progress.’ I want to know when that’s coming back, and what we’re going to be doing, and who’s responsible for it. Bless you for doing this work, and we need a schedule.” Gonzalez, the committee’s chair, said that she is thinking of introducing a Council resolution that would set expectations for periodic updates from SPD and for progress on addressing the audit report recommendations. “I want to pursue that as an avenue for accountability along the way so that we don’t hear a year from now ‘Well it didn’t go as well as we thought it would.'”

In addition to SPD’s reports to the Council, the City Auditor’s Office will continue to follow up and issue annual reports until all 30 recommendations have been addressed.