Today the Mayor sent to the City Council a draft ordinance creating a mandatory housing affordability program for residential developments in Seattle. Mayor Ed Murray is on the record committing to the creation of 50,000 new housing units over the next ten years, of which 30,000 will be market rate and 20,000 will be guaranteed affordable. This program would supply a piece of those 20,000 and his representatives briefed the Council’s Planning, Land Use and Zoning Committee this morning on the Mayor’s vision for it. 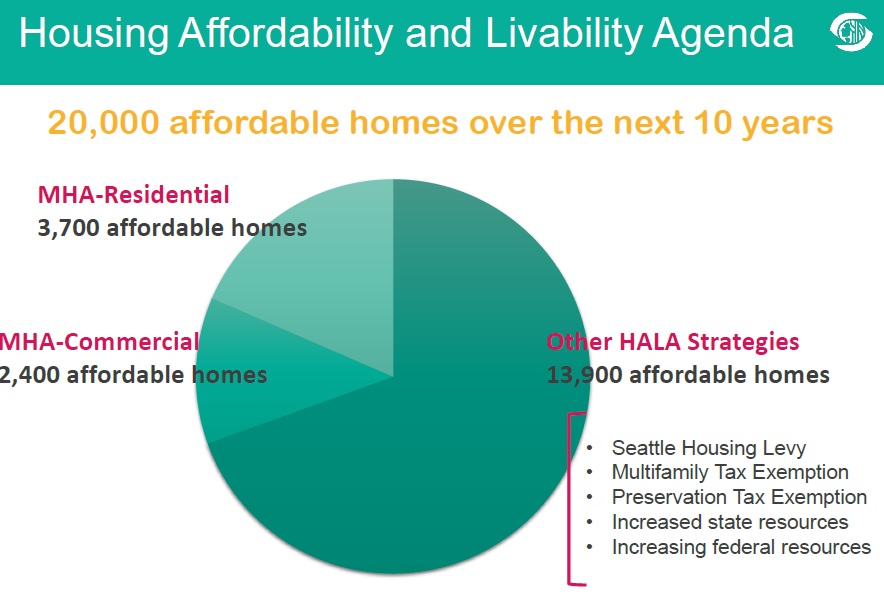 There are actually two parts to the MHA program: a residential part and a commercial part. Both create affordable housing, but drive it through requirements placed on, respectively, residential and commercial development projects. The commercial program was enacted into law last fall; this morning’s briefing was on the proposed residential program.

A voluntary version of the program has been running as a pilot project already, with some success. The basic idea is simple: in exchange for being able to add an additional floor on to your multi-family residential development project, you must commit to either making a certain percentage of the units available at affordable prices, currently 80% of Seattle’s Annual Median Income (AMI), or paying an amount into a fund for the development of separate affordable housing projects.  The deal has only been offered in a small number of neighborhoods and has been tracked closely. There have been some takers, of which most have chosen to pay rather than reserve units in their project, according to the Mayor’s staff.  There is a concern that this is happening because the payment option is cheaper in the end; unfortunately it also creates a danger that affordable housing will get concentrated in a few areas of the city rather than spread evenly around.

The new plan is closely tied with the HALA “grand bargain” plan to upzone urban village areas to accommodate larger residential buildings; but the catch is that in those areas developers will be required to either reserve affordable units or pay into the fund. 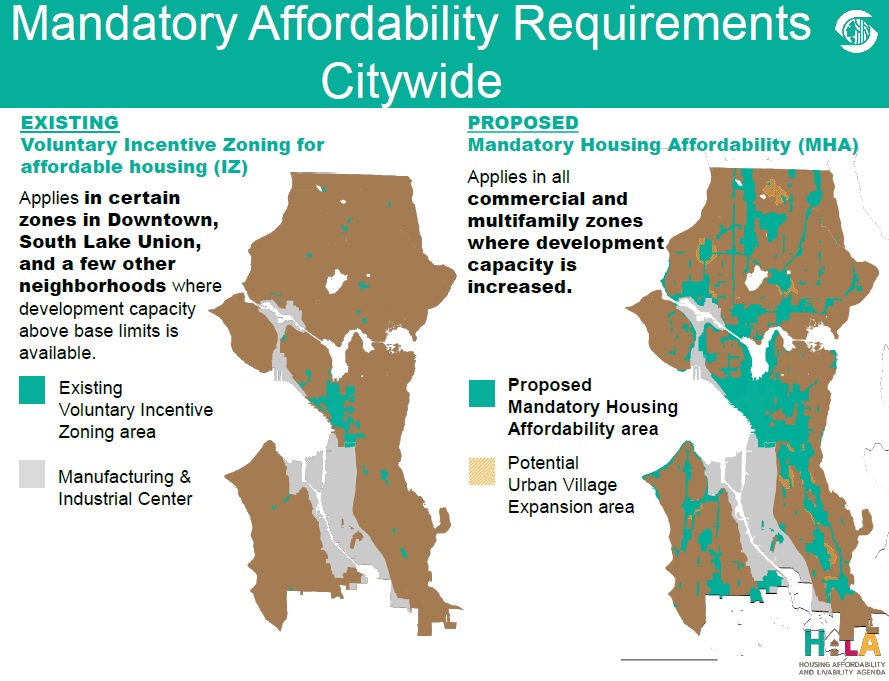 Because it’s tied to HALA, the rollout is somewhat complicated. First, the city is putting a framework in place for how the structure and logistics of the program work. Then over the next two years as the zoning gets updated in each affected neighborhood a customized version of the MHA program will be attached to it with specific numbers tuned to the commercial and residential development situation in that neighborhood. The hope is that the residential framework ordinance will be in place by the end of July, and by then they will be starting to work on the zoning changes for individual neighborhoods.  First up will be downtown and South Lake Union this summer; The University District and 23rd Avenue area will be sometime “between 6 and 18 months” out; and they hope by next summer to be working through other areas of the city. 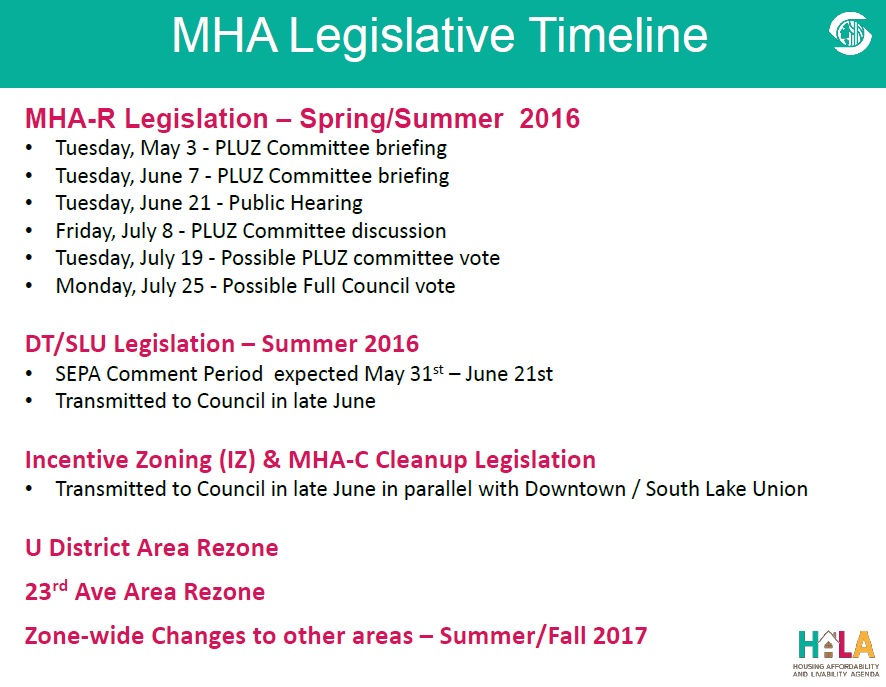 Of course, this is Seattle so there will be lots of community outreach meetings (and no doubt lots of opportunities for residents to yell at hapless city staff who are just trying to do their job and collect input). 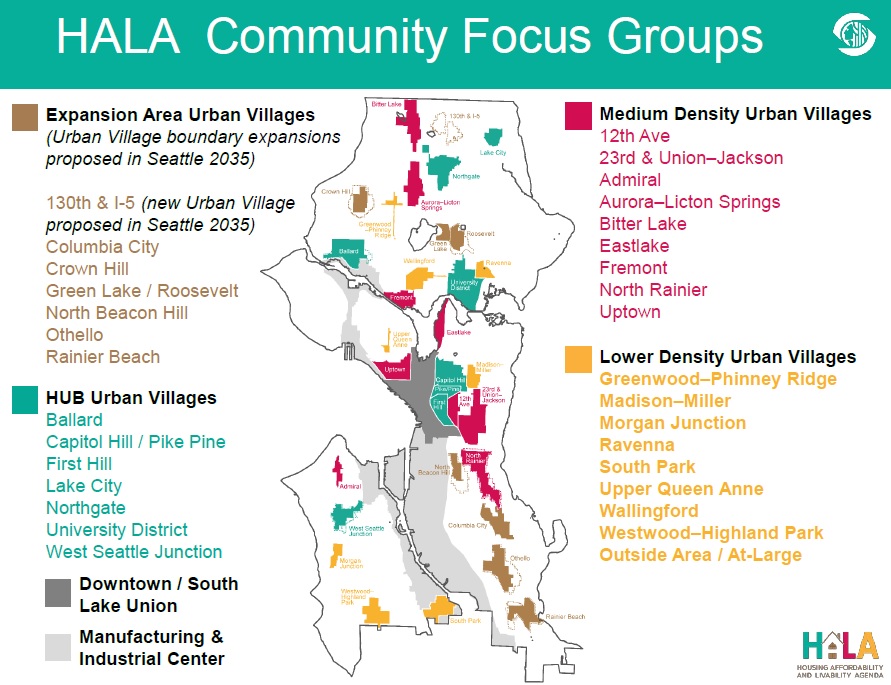 The MHA program is a clever and effective way to ensure that affordable housing gets built. It’s also cost-effective: according to the city, for every $1 of MHA funds spent, another $3 are leveraged from other sources. And housing units set aside by developers are guaranteed to be affordable for 50 years. Also, in the Mayor’s framework the target rent for affordable units is lowered from 80% of AMI to 60%, meaning that the units will be affordable to a broader set of people. The program can also prioritize family-sized affordable housing, of which there is very little in Seattle.

The Planning , Land Use and Zoning Committee will get a second briefing on the program on June 7, and will hold a public hearing on June 21 where they will dedicate the bulk of the meeting to hearing public comments.