This morning the Parks, Seattle Center, Libraries and Waterfront Committee was briefed on two ongoing sticking points with the plan for redeveloping the Seattle Waterfront.  One is a thorny problem, and the other is an opportunity to do something really cool.

The backstory: when it was decided that the Alaskan Way Viaduct was coming down, that created an opportunity for the waterfront district to be redeveloped into something much more appropriate to the city’s desire to be friendly to tourists, pedestrians, bicyclists, and transit riders. It’s not without constraints, however, not the least of which is the Alaskan Way surface street which is an important vehicle arterial for both cars and freight to the western edge of downtown.

A planning process was kicked off in 2012; the initial plans were released in 2014, the draft Environmental Impact Statement was published in June of last year, and public comments were solicited Last month a “supplemental draft EIS” was released that amends the original version by providing alternatives for two large issues.

Supplemental EIS’s are a fairly big deal, and are done under only a few conditions. One of the changes, focused on the configuration of Alaskan Way at the southern end of the waterfront, was due to substantial public comments. The other change is to address to potential change in the plans for the Seattle Aquarium’s expansion.

As an aside, the Supplemental EIS just issued does not attempt to address all the public comments submitted on the original draft; that will happen in the final EIS, which is expected to be issued at the end of October.

The first issue, Alaskan Way’s southern end, originally was planned to look like this: 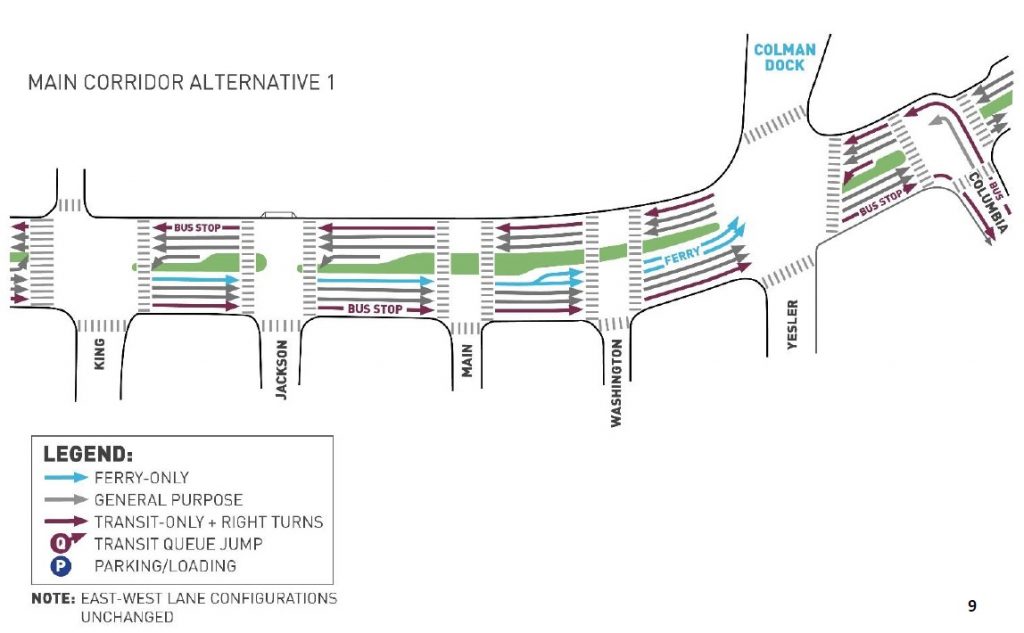 There a re dedicated transit lanes in both direction, plus turn lanes for traffic to feed into the ferry terminal at Colman Dock. There are protected bike lanes as well, though they are not pictured; both directions of bike lanes are on the western side of Alaskan Way (in this diagram, just above the roadway).

The public comment response to this was “yikes, that’s a lot of traffic to cross as a pedestrian.” In some places it’s eight lanes. All the intersections have traffic lights and pedestrian crossing signals, but still, they have a point.

The SDOT planners came back with an alternative that would narrow the road: 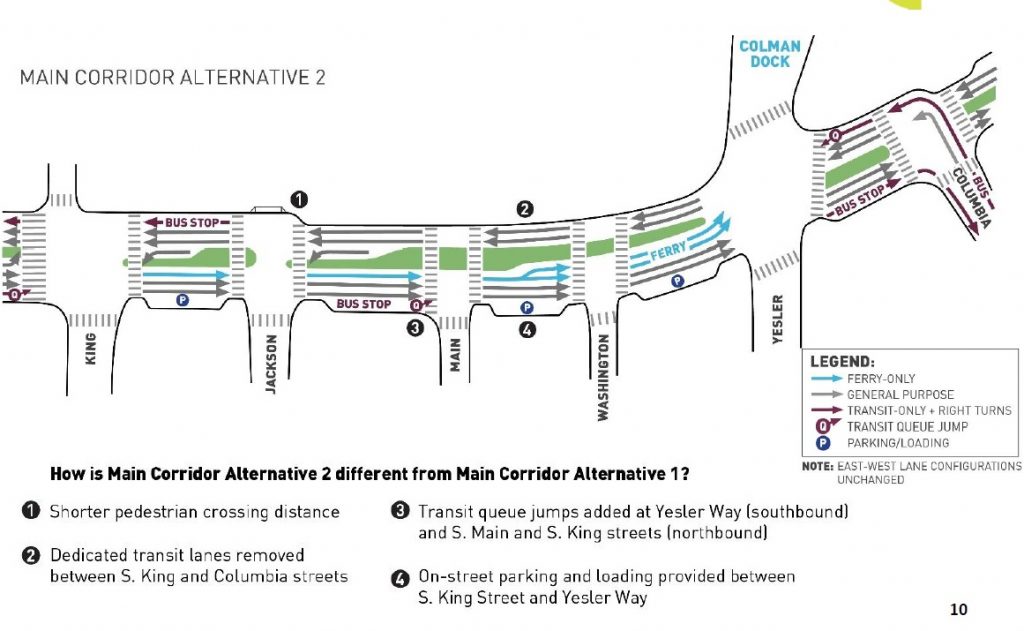 In this version the dedicated transit lanes are eliminated, with cut-outs for bus stops and “bumps” out into the roadway at crosswalks to shorten the width for pedestrians. The intersections would have separate signals for buses to give them a chance to scoot in front of other traffic at intersections.

This alternative would obviously slow down transit vehicles by forcing them into main traffic; SDOT predicts 40-50 buses per hour travelling along Alaskan Way. It would also slow down main traffic. In fact, SDOT ran traffic simulations to model the backups, and found that at peak times it could generate 8000 feet of backed-up traffic — all the way back onto SR99 before the tunnel entrance. (the SDOT folks noted that there are some caveats to that modeling exercise, because it can’t accurately model at what point drivers decide to skip the exit onto Alaskan Way and continue on SR99 to another exit; the flip side is that those drivers would just shift traffic to other places rather than reducing it)  So this is a tough problem to solve: it involves trading off pedestrian-friendliness with transit and freight friendliness. SDOT strongly prefers the original plan, but we shall see what public comment on the new alternative reveals.

The second issue is much cooler. The Seattle Aquarium has been fundraising for a major expansion, and as part of the waterfront redevelopment developed a concept for adding an additional building over the water to the south of their original Pier 59 building, as well as a major renovation of their Pier 60 facilities. The plan also includes what they call an “overlook walk” — a lid over Alaskan Way in the plaza in front of the aquarium, with a small additional building underneath and stadium-style stairs in the plaza area that would allow for informal cultural and entertainment programs on the waterfront. The lid would also become public space for a wide variety of activities. 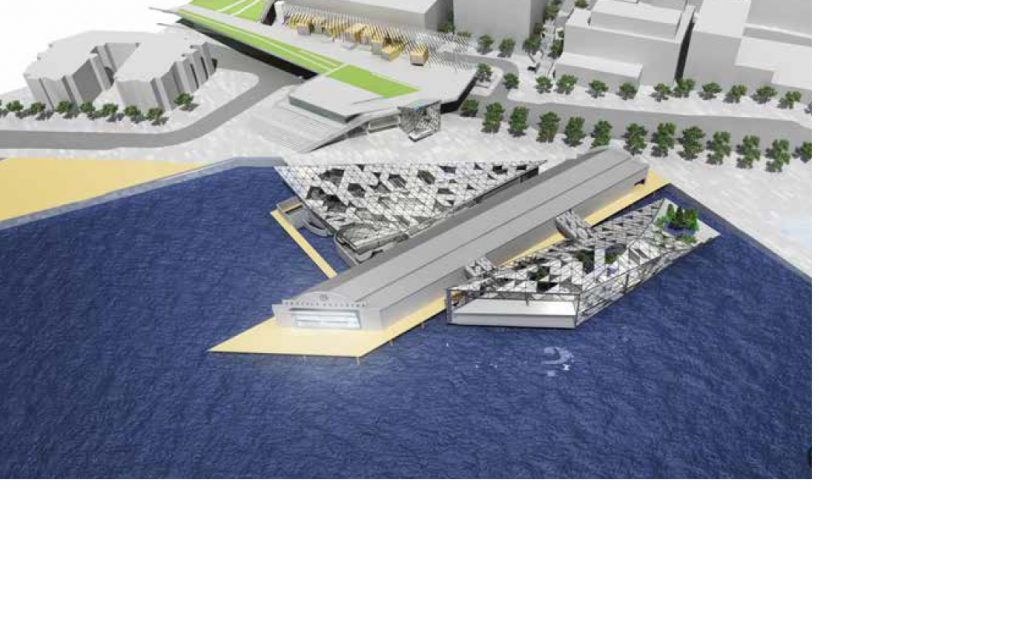 But now there’s a new potential plan: ditch the new over-water building and allow the Aquarium to create a new “Pavilion” building in the plaza connecting to the lid. They would lose the stadium seating, but gain more public space on the roof of the pavilion. They would also get to add a second staircase that is better oriented with the north-south flow of pedestrian traffic. 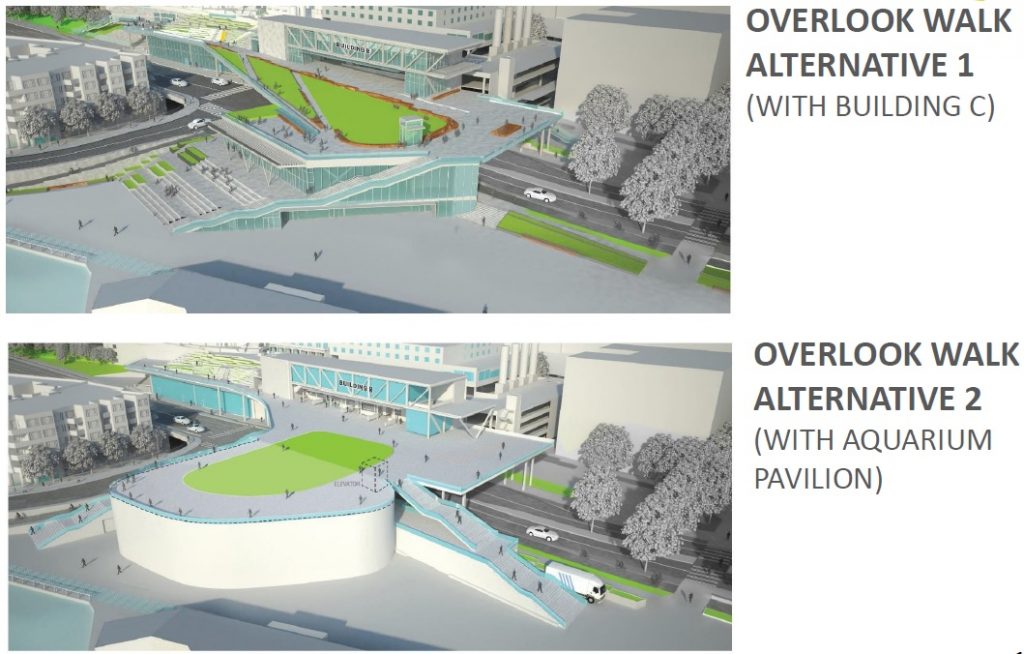 SDOT went to great pains to explain that this is a fairly new plan and the big white blobby area is not representative of the size and shape of the pavilion; it’s just a placeholder until the architects can do their work and come up with a real building design.

Moving the Aquarium’s expansion back over land makes so many things better: it’s more environmentally friendly, because the water under the pier is important habitat for sealife and blocking sunlight dramatically affects the quality of the habitat. It’s easier, simpler, and faster planning, permitting, and construction. And from the diagrams above, it looks like the city and the Aquarium are well on their way toward making a cooler waterfront plaza out of the project as well.

The release of the supplemental EIS triggers a new public comment period, this time extending for one month. You can review the plans and the supplemental EIS on their website, and you can submit comments to sdeis@waterfrontseattle.org. The city is also holding a public meeting May 10, from 4:30 to 7:30pm at City Hall in the Bertha Knight Landes Room; you can talk to the staff involved and submit comments your comments in person.