This morning the Council’s Affordable Housing, Neighborhoods and Finance Committee took a close look at the Mayor’s proposal for increasing the business license fee and the B&O tax.

The Mayor is looking for $20 million per year to pay for expanding the police force, additional staff for the 911 call center, and IT investments related to police body-worn cameras and a data analysis platform.

The budget office figures they can find $7 million between general growth in city revenues and cost-cutting. The other $13 million they are proposing should be raised from increasing business license fees ($5 million) and the B&O tax ($8 million).

Today the business license fee is simple: if your business makes less than $20,000 annually, you pay $55. If it’s more than $20,000, you pay $110.  That generates just under $7 million in revenues annually. Yes, that means Amazon’s business license costs them $110 per year, the same as that lady down the street that sells $21,000 worth of handmade jewelry on Etsy every year.  You can see the opportunity here, and arguably it’s fair game.

The plan is to change to a five-tiered fee system, still based on gross revenues.

This generates the needed $5 million in additional funds. It doesn’t do that much to impose fairness though: companies with revenues over $2 million are still paying a negligible amount for their business licenses, and the smallest companies are paying significantly more than they do now. It’s complicated because there are so many small companies and so fewer large ones; as budget director Ben Noble pointed out, if you reduce the fee for the lowest tier, you need to make a substantial increase to the higher tiers to compensate. Council member Tim Burgess’s office proposed three other structures as points of comparison: 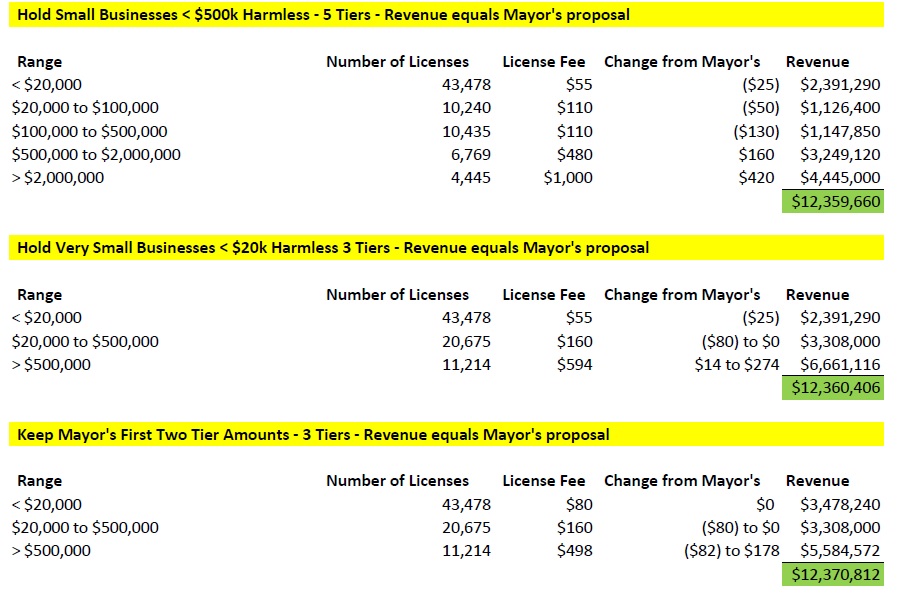 It comes down to your goals in instituting the fees; you can minimize the pain for small businesses, or you can spread the pain around. Some are even proposing adding additional tiers for larger companies, but because the list of companies gets short — there are approximately 1000 companies in Seattle with more than $5 million in revenues — it’s difficult to raise much more money doing that.

The B&O tax conversation was simpler. State law caps the B&O tax, and further restricts increases to a maximum of 2% in any given year. The city’s proposal is to increase it by 3.2%, which takes it up to the cap, and to phase it over time to stay under the annual increase limit.

The Council didn’t arrive at any conclusions today, and didn’t vote on a specific proposal. But the clock is running: it will need to finalize the fee and tax rates before it recesses in August so that city staff have time to implement it before it takes effect in January.