Earlier this week Council member Lorena Gonzalez, the chair of the Gender Equity, Safe Communities, and New Americans Committee, circulated a letter for her colleagues on the City Council to sign. The letter is addressed to the U.S. Citizenship and Immigration Services, and raises concerns about their proposal to increase fees for naturalization.

The fee for Form N-400, Application for Naturalization, will increase from $595 to $640 — though they are also proposing a reduced fee of $320 for those whose household income is between  150% and 200% of the federal poverty guidelines.

The application fee for form N600/600K, Application for Certificate of Citizenship, will increase from $600 to $1170 — almost doubling. As the letter points out, this certificate is often required for a naturalized citizen to work or vote.

The fee for filing Form N-565, to replace a naturalization or citizenship certificate, will increase from $345 to $555.

Why is USCIS doing this?  Simple: the entire department — all immigration and naturalization services — are funded by these fees. That includes adjudication of refugee and asylum processing, the operation of the Office of Citizenship, and the Systematic Alien Verification for Entitlements (SAVE) program. As the Council’s letter points out, that’s fundamentally broken.

Why should we care? Because as a recent study points out, naturalization of permanent residents provides significant economic benefits both to the new citizens as well as to the local, state and federal government.

As of 2012, Seattle had 86,130 foreign-born residents — 18% of the population — of which 56,171 were already naturalized citizens and another 22,648 were eligible to naturalize.  49% of those eligible residents have at least 2 years of college education, and only 20% have limited English proficiency, making them highly employable in our growing local economy.

The study claims that nationally naturalization causes individual earnings to increase by an average of 8.9%, the employment rate to rise 2.2 percentage points, and home ownership to increase 6.3 percentage points. That also means there is a decrease in government benefits paid to those new citizens for many programs (with the exception of SSI — a program for extremely low income citizens), and additional tax revenues from their increased income (and personal spending).

For San Francisco, which is similar in many ways to Seattle, that results in the following economic benefits of increasing naturalization: 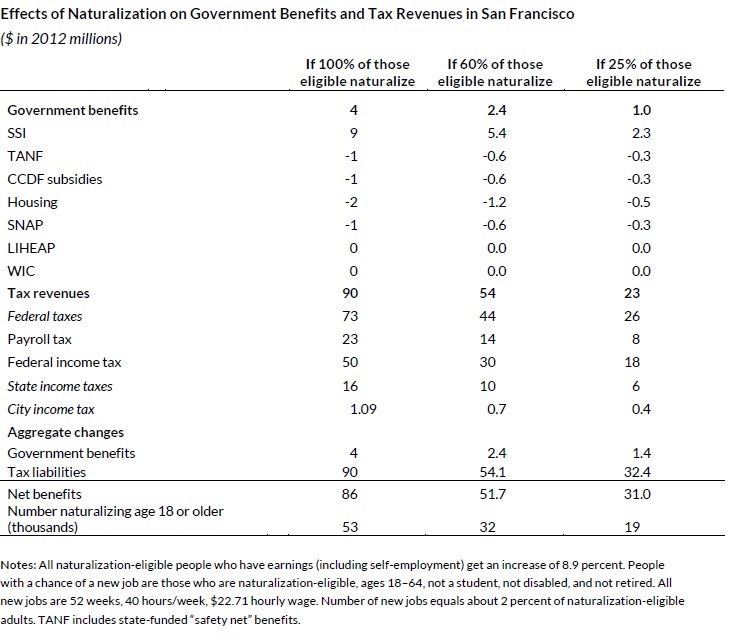 Seattle’s numbers would actually look better than San Francisco per capita, since it has a higher percentage of eligible immigrants with college educations and a lower percentage of those with income at or under 150% of the federal poverty level.

USCIS is moving the only lever it has to raise revenues, but it does seem counter-productive to raise additional barriers to becoming a U.S. citizen when the benefits to naturalization are so clear.