This morning the Council heard a report on SPU’s recycling program and an update on the city’s plastic bag ban. There was much encouraging news.

In 2013, the city set a goal of a 60% recycling rate for its municipal solid waste (MSW) stream by 2015. That breaks down into four segments, each with their own goal:

For two of the four, the city came very close to hitting the target: 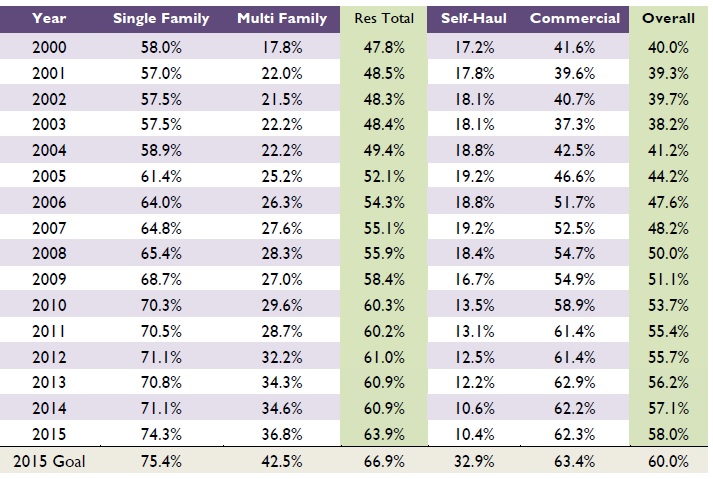 And overall the total tonnage of MSW has been trending down — over a time when Seattle’s population and economy have grown significantly. 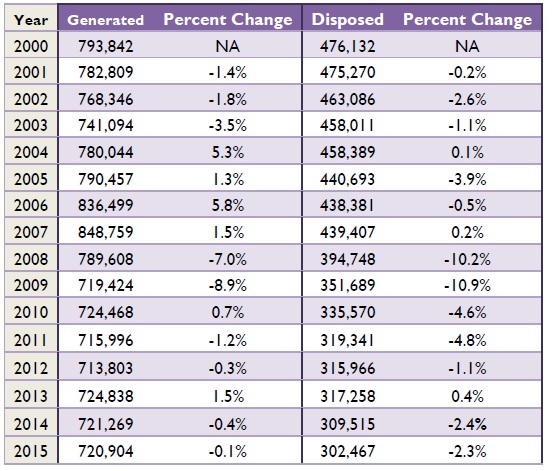 The 74.3% recycling rate for single-family households in the city is astonishing.  The rate for self-haul is disappointing, but as Council member Mike O’Brien pointed out in the discussion today, that is probably a change in use patterns since recycling is free at curbside and people know they will get charged for what they bring to the transfer station. The overall tonnage of materials that people have been bringing to the Seattle transfer stations has been trending down for many years, which is a good thing; though the numbers are clearly wonky the last two years since the North station closed (SPU staff think many people are going to the Shoreline station instead, which they wouldn’t capture in their data). 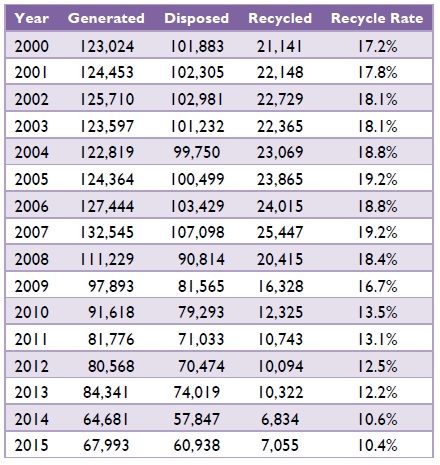 When the new North Station opens this fall, the recycling rate may change, as the new facility will have a recycling station that can be used for unloading recyclable materials before your vehicle gets weighed on the way in.

The rate of recycling at multi-family residences continues to be a challenge for SPU staff, and they have been stepping up their efforts. A survey they took showed that 25% of residents in multi-family housing had barriers to recycling. The staff believe the big issue is ease of separation, as many older buildings don’t have convenient spaces for recycling collection points alongside trash dumpsters. They are currently providing technical assistance to 75 large apartment and condo buildings, which collectively serve 5000 residents, to provide better recycling and food waste collection facilities. They have also provided 920 buildings with educational resources and information, and did onsite presentations at 27 properties and 28 community groups. They look at food-waste collection for multi-family properties as well; they delivered 15,000 kitchen-compost containers to multifamily properties. But it’s difficult to do an apples-to-apples comparison with single-family residences, because multi-family properties don’t have yards that generate yard waste the way single-family homes do.

SPU is looking very broadly at waste prevention programs, including re-use, engaging with industry on changes in packaging, and food waste prevention for both residential and commercial customers. 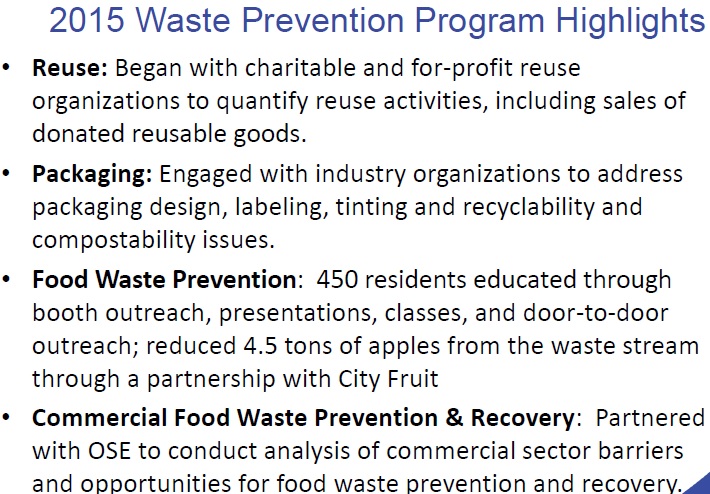 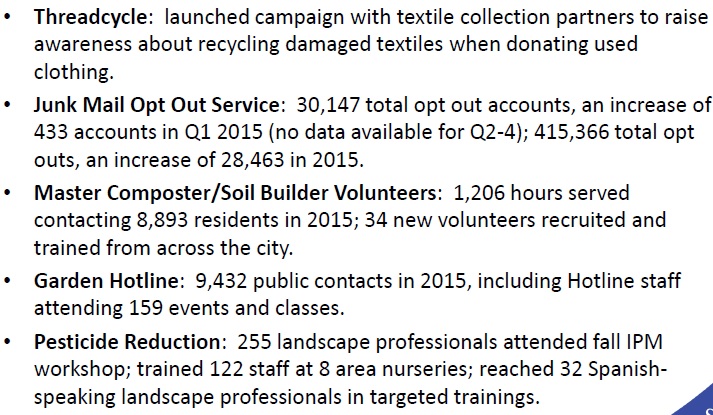 SPU’s goal is to reach 70% overall recycling by 2022, so it’s far from done. It has several more initiatives planned for the this year and next, including opening up the new North Station with its Reuse and Recycling Center, education programs, reducing contamination of recyclable materials, and further emphasis on compostables. 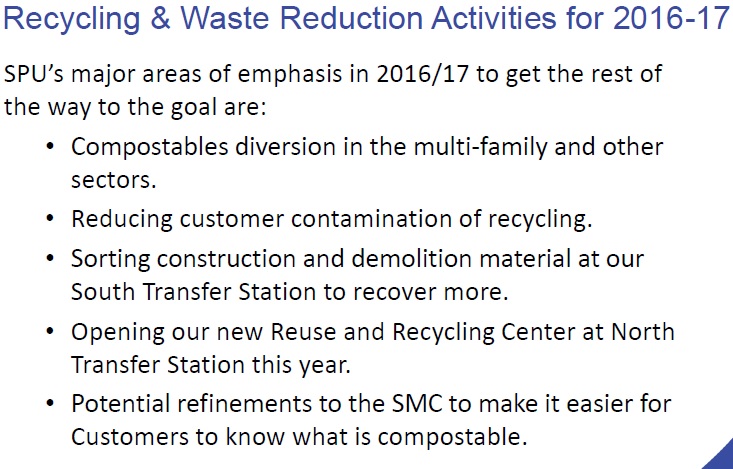 And yet despite the high ambitions, SPU staff believes strongly that Seattle is the #1 city ion the country for recycling, with numbers much higher than any other city.

Banning plastic bags has become vogue; according to SPU there are 14 jurisdictions in Washington State with bag bans, 140 in California, and many more spread across the country. Most use the same basic structure we do: ban plastic bags, charge 5 cents each for paper bags, and encourage reusable bags.

Why, you may ask, if plastic bags are banned, are there still nearly 200 tons a year in Seattle’s solid waste stream? Because not all plastic bags were banned. They are still legal, and heavily in use, by take-out restaurants, dry cleaners, newspaper distributors, and grocery stores in the produce and bulk-foods sections. Also, there are several neighboring cities that haven’t banned them, so if you shop in Bellevue and live in Seattle you might bring some home with you.

And while things are going well, SPU reports that there are still some issues that need to be resolved. They recently did inspections of randomly-selected stores to gauge compliance, and found that while large grocery stores, drug stores and apparel stores were highly compliant, small grocery stores were not (albeit in a very small sample). Part of this is due to misinformation; some stores believed that they could still use plastic bags if they charged for them (they can’t). SPU made a significant investment in education when the law was being rolled out, but has not kept it up over the last couple of years, so they expect later this year and into 2017 to step that up again.

Another issue is that unlike the early days of the ban, many stores have discontinued their plastic bag collection bins, so people are trying to recycle them in their curbside blue bin. But they get caught inside the sorting machines at the recycling center and clog up the machines. SPU would like to see collection points in stores again, but if you must recycle them curbside, put the bags all together inside another bag and then  leave them in your recycle bin.

Also, with the decline of plastic bags there has been an increase in other kinds of “plastic film” containers like flexible packaging. They are not currently recyclable, but SPU is working with organizations to try to establish a new recycling program for them.

In addition, consumers are often confused about which plastic-looking bags are compostable. Compostable bags are almost always tinted green, but many non-compostable bags (like “organic” produce bags in the grocery store produce section) are also tinted green. SWPU is considering asking the City Council to pass an ordinance requiring that green be reserved just for compostable bags, to simplify matters.

Finally, Seattle shoppers have fully embraced reusable shopping bags, but have not fully embraced the need to wash them regularly. SPU will start a publicity campaign about this in the near future.

The 5-cent charge for paper bags was provisional and expires at the end of the year, but SPU will be asking the City Council to make it permanent. SPU reports that retailers are fully supportive of this because it helps them recover their costs for the bags. 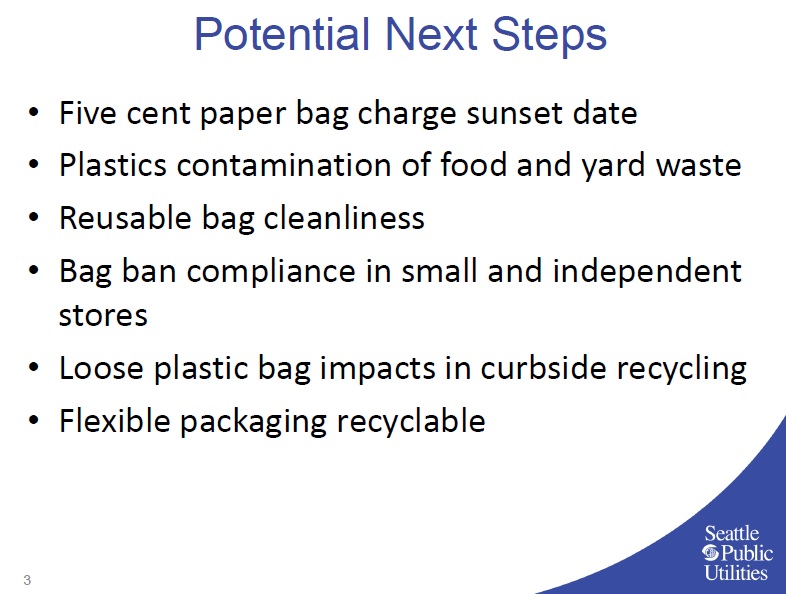 Both SPU and Seattle City Light spend lots of money convincing people to use less of their products and services, but for all of the far-right’s complaints about government’s inability to do things right, they’re both doing a damn good job with their environmental efforts. And wanting them to shrink their businesses is an awfully good reason for them to remain public utilities.