We have a new 520 Floating Bridge, and a year from now we’ll have have half of a new approach on the west side. But there’s much more to come, and the Council got a briefing on the plans yesterday morning.

WSDOT is working hard on the north half (i.e. westbound lanes) of the west approach to the new 520 bridge, and if all goes well it should open up next summer along with the new mixed-use lanes.  And as WSDOT and SDOT staff explained yesterday, the remainder of the project, dubbed “the rest of the west,” involves a major remake of the Montlake area as well as the completion of the south half (eastbound lanes) of the west approach, work on the Portage Bay bridge and I-5 interchange, and a second Montlake drawbridge. But things get worse before they get better: to build the south half, both westbound and eastbound traffic will need to be squeezed into the new northern half — 2 lanes per direction. Then they demolish the old south half and rebuild it. Construction is slated to begin by 2018, as part of Phase One. 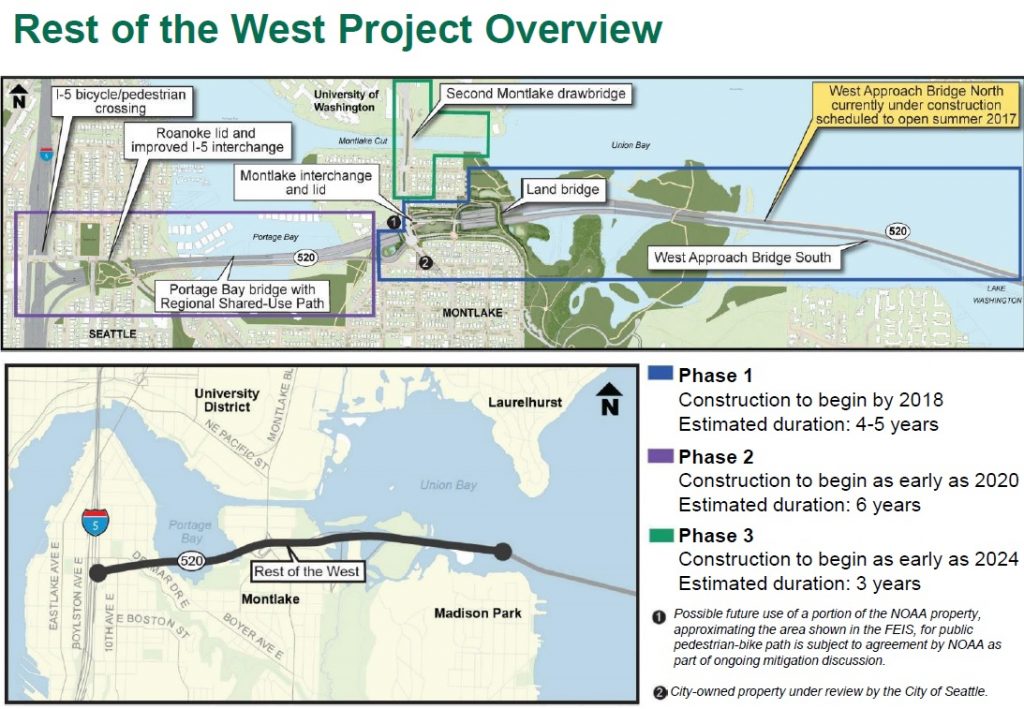 Phase One will also involve dramatic improvements to the Montlake area. The original vision involved an ambitious “lid” over 520, but that has since been scaled back to a “smarter lid” and a pedestrian/bicycle scenic “land bridge.” It will take 4-5 years to complete.

Phase Two, starting as early as 2020,  will involve the Portage Bay bridge and I-5 interchange, and should take six years to complete.

Phase Three updates the Montlake corridor north of 520 up to Husky Stadium and includes a second Montlake drawbridge to the east of the existing one. It has not yet been decided how traffic will be split across the two bridges, but some are pushing for the second bridge to be dedicated to pedestrians, bicycles and transit.

The Seattle Design Commission has been working for years with SDOT and WSDOT on the plan for Phase 1, and yesterday they shared their thoughts on the latest design (which they support). 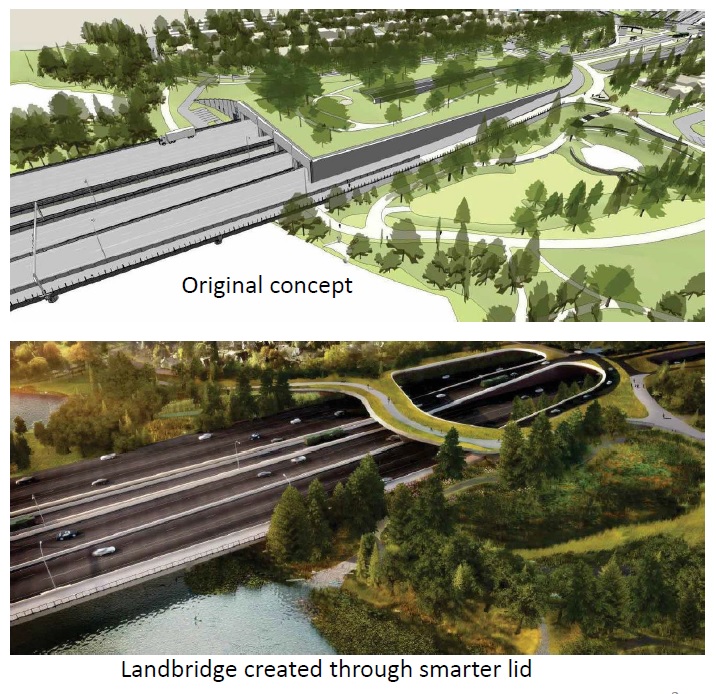 The new plan involves natural landscaping on both the north and south sides of 520, with a pedestrian and bicycle land bridge crossing over. The land bridge has a path down the middle with landscaped berms on both sides that obscure the highway and buffer the automobile noise, and a scenic lookout spot. 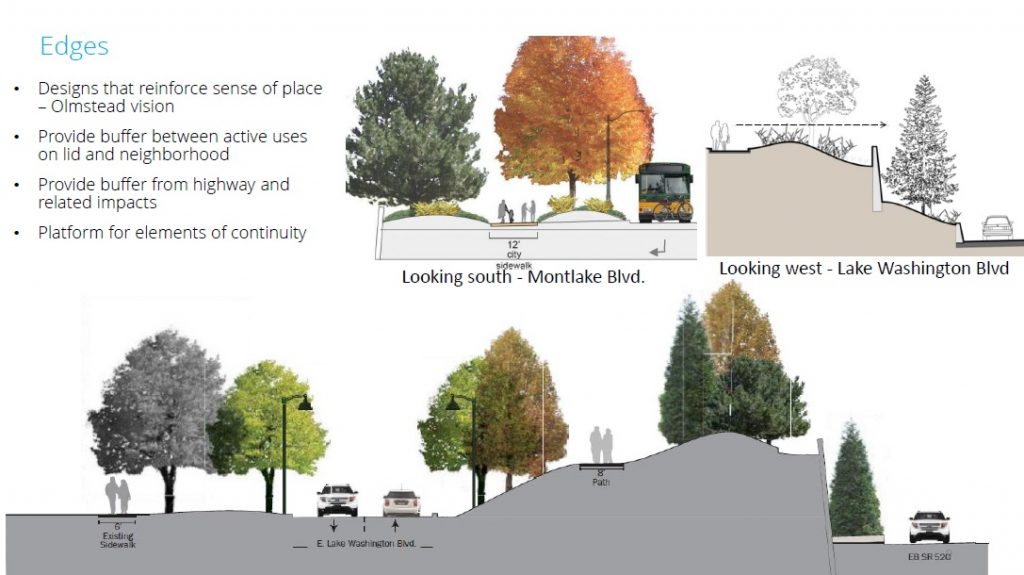 And the lid will have plenty of open space. 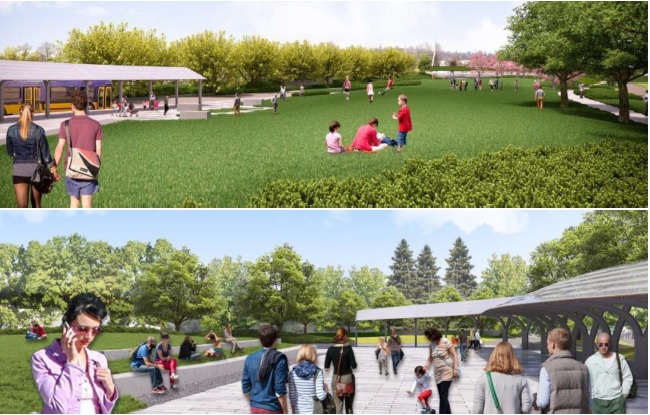 All this is not issue-free, however, starting with the new floating bridge and the construction currently underway.  Local residents have complained about the bridge lights which they claim are too bright, and the expansion joints in the bridge which are too noisy. They have also made complaints about construction noise and debris from WSDOT’s demolition of the old floating bridge.

SDOT (which is in charge of Phase One’s lid and landscaping) is just starting up its public outreach process for the design. Last month WSDOT and SDOT hosted both an online open house and a physical open house event in Montlake to share the plans, and it will continue community outreach next month. 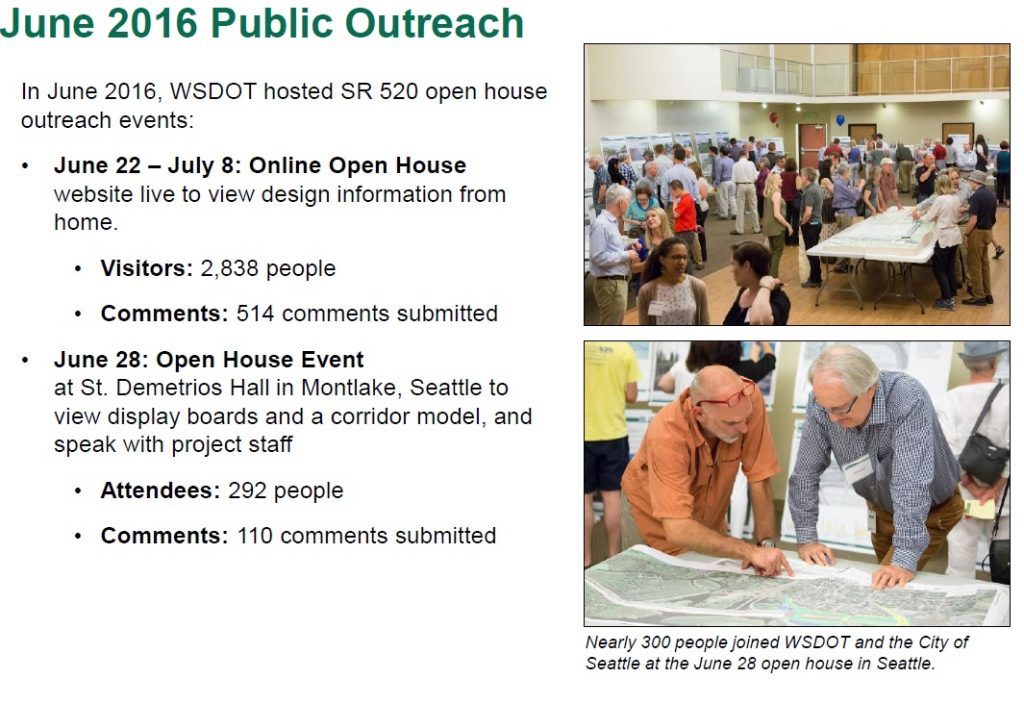 The Council members raised several issues with the project as well, some of them pet issues. Council member Bagshaw urged the project team to connect the new open space paths to the existing trail that runs next to the Arboretum over to Madison. She also encouraged them to appoint a senior program manager as an official neighborhood liaison so that local residents know who to take issues and complaints to and get them resolved quickly.  Council member O’Brien appreciated the artist renderings of the landscapes and open spaces, but was skeptical that the reality of the finished project would be anywhere near as nice.  Council member Johnson jumped on that bandwagon as well, pointing out that the land bridge and the landscaping with prime targets for “value engineering” (an industry term for “making design changes to reduce the cost of the project”) and pushed the team to commit to keeping the current design intact through to the end.

Council member O’Brien asked another good question: what measures would the project team be taking in the spirit of “allowing the community to survive” for the next 11 years while all this construction is going on? The SDOT team responded that part of their community outreach discussions beginning in August would be about how to be a good neighbor during construction. During the public comment session, residents complained about the plan to demolish the gas station and market just south of the Montlake Blvd – 520 intersection to use for construction staging, both because it would be an eyesore and because the community relies on both the gas station and market.

Council member Herbold followed up on the bridge light and noise issues, asking what the city’s role is in addressing that and whether they had leverage with the permitting process for the next phase to try to get a faster resolution. Unfortunately since the bridge is owned and maintained by WSDOT, not SDOT, they city’s role is purely monitoring.

Council member Johnson raised his concerns, shared by pedestrian and bicycle activists, about maintaining safe access for bicycles, pedestrians and transit through the corridor and up to Husky Stadium — both during and after the construction project. He noted that the Husky Stadium light rail station has become a critical connection point for people living south of 520 as well as north of it, and that the design plans create “several points of serious conflict” for what will continue to be a large number of travelers through that area.

If you were hoping that the Montlake construction would finish sometime soon, you’re going to be disappointed; there’s a long way to go still. But the plans of paper look very nice, and if the issues get resolved and the neighborhood and commuters all survive the next 11 years, the result should be a significant improvement over the current mess that is Montlake.

You can view more information on the project at WSDOT’s project home page.