Last Friday, Mayor Ed Murray sent a letter to the nine City Council members, announcing a new stakeholder group that he and Council member Sally Bagshaw are convening. That task force will review the city’s rules and procedures for dealing with unsanctioned homeless encampments and deliver recommendations to him and the Council.

A bit of history: since homeless encampments appear on public property managed by several city departments (including Parks and SDOT), the city wants to have a consistent response across all of those departments. So in 2008 city staff wrote a Multi Department Administrative Rule (MDAR) specifically to lay out those rules.  As explained in a presentation from Deputy Mayor Kate Joncas back in January, the 20-page MDAR lays out how unsanctioned encampments are identified, provides for outreach to connect the homeless with services and shelter, and specifies enforcement procedures. 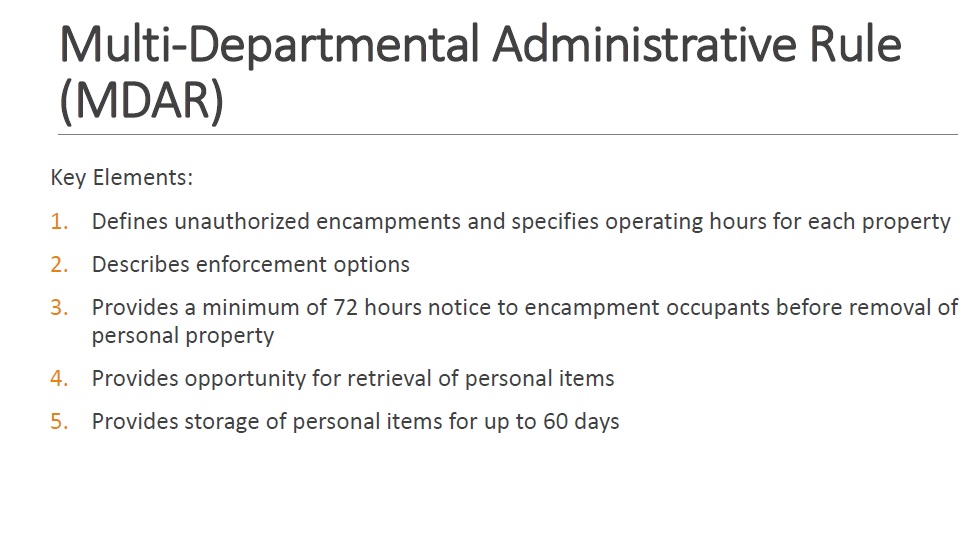 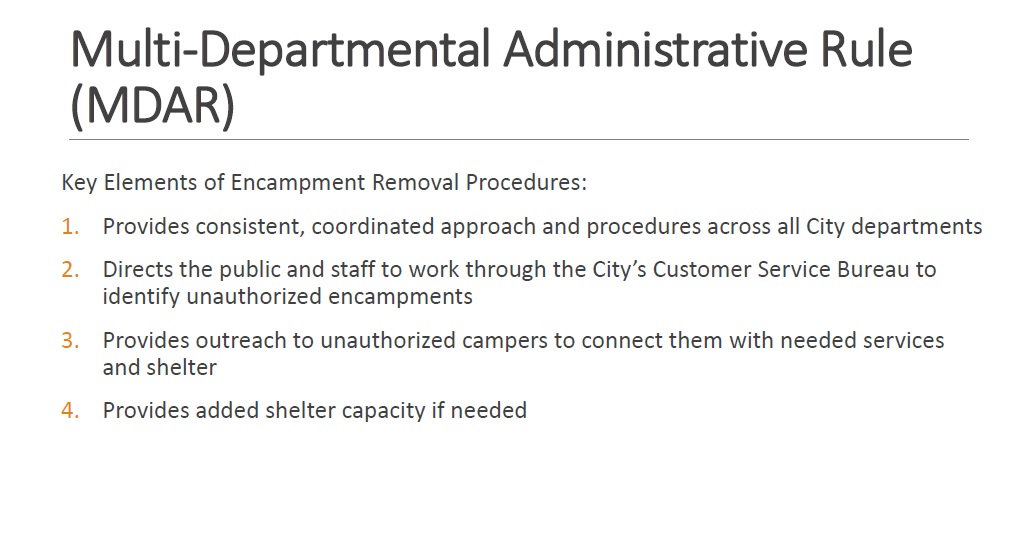 But as has come up time and time again, the MDAR protocol does nothing to help people who are unable or unwilling to enter a shelter (often for valid reasons). They simply get “swept” from one unsanctioned encampment to the next. This has led to a grassroots movement to “stop the sweeps” with support from some Council members who prefer a harm reduction approach, which dictates that in the absence of a better option leaving them in place is better than displacing them from an unsanctioned encampment.

The “stop the sweeps” movement has put pressure on Mayor Murray to back off from the MDAR protocol. Murray, for his part, argues that the city has improved upon the 2008 version of the MDAR, including stepping up outreach and offering better services; nevertheless he states his unequivocal belief that people living in unsanctioned encampments present a danger to themselves and to others and thus his continuing commitment to the MDAR, sweeping people out (if necessary) and cleaning up the encampments. This has led to several public spats, most notably about Murray’s plan to clean up the “Jungle.” Both sides have been standing their ground.

So last week’s letter from the Mayor is a small step on a new path. Murray and Bagshaw intend to recruit for the task force “representatives from a range of interests, including homeless advocates, service providers, and neighborhood and business leaders.” Murray and Bagshaw have a difficult task ahead: that will be a difficult group to bring to consensus, since many of the neighborhood activists hold opposite views from the homeless advocates. In his letter, Murray says, “I believe we can find a balanced approach that meets the needs of people experiencing homelessness and the needs of our neighborhood and business districts. But we need to bring all perspectives together.”

To that end, Bagshaw told me in an email:

“The Mayor and I are still in the initial planning phase of developing a stakeholder group relating to the City’s encampment policy.  Everything from the group’s mission statement to the membership of the group itself is still in discussion.

At this point there are many more details to work through, so I’m going to hold off on commenting further until I have something specific to offer you. “

After receiving recommendations from the task force, Murray intends to propose legislation updating the MDAR by the end of the year. That’s an interesting approach, since the MDAR itself isn’t legislation, and the Mayor is free to revise it on his own within the boundaries of the executive branch. It is, however, a nod to the Council’s May resolution on the Jungle which could be read broadly as a statement by the Council on sweeps — and their collective desire to dictate the approach the city takes to all unsanctioned encampments.

And yet, Murray is still standing his ground in the short term, doubling down on the MDAR and sweeps even while admitting it needs improvement. He clearly states in his letter, “While this process is underway, the established MDAR practices must continue.”