Yesterday afternoon the Energy and Environment Committee had its first discussion of a bill to make moving between apartments a little easier by capping move-in fees and security deposits and allowing tenants to pay those fees in installments.

(see my earlier post on this, discussing the messiness of this bill)

The committee hearing began with over an hour of public comment, mostly from tenants and their advocates on the enormous challenges of even moving to a less-expensive apartment when the up-front fees required are onerous to say the least — anywhere from $4000 to $8000 when including security deposit, last month’s rent, and other fees to cover tenant screening, background check, credit check, and a cleaning fee.

The testimony from tenants was stirring: many people are stuck in an apartment they can no longer afford because the up-front fees to move to a new apartment are an insurmountable barrier.  This also affects the homeless, many of whom have steady jobs and income but also can’t raise the cash to pay move-in fees and get themselves re-housed.

Today’s hearing involved a quick summary of the salient points of the bill, and a review of pending amendments to gauge the Council members’ sentiments on them. This is important, because some of the amendments would force the title of the ordinance to be changed — and that in turn requires that the bill be re-introduced. The soonest it could be reintroduced would be September 26th, in time for another discussion in committee on the 27th and possible final approval the following Monday. That is just before the Council drops nearly everything else to work on the 2017-2018 budget. The clock is ticking.

The Council members present (Sawant, Herbold, Gonzalez, and O’Brien) liked the bill and the proposed amendments. They were strongly in favor of adding enforcement authority to the Department of Construction and Inspections (SDCI) though were considering the notion that since about 50% of Seattle’s current residents are renters, it might be time for the city government to have a separate department to oversee and enforce tenant rights (SDCI has other responsibilities).

There is no doubt that move-in fees are high and pose a significant barrier to tenants’ access to housing. Tenant advocate Washington CAN has gathered survey data that confirms this. Today, given the extreme housing crunch in Seattle, all the power is in the hands of landlords, and that creates opportunities for profiteering by unscrupulous property owners. That leads us to a key question: how prescriptive should the city be when it comes to rental agreements to try to drive the move-in fee barrier down?

Partly that’s a question of data. While several speakers during today’s public comment session accused landlords of being solely profit-minded, no hard data was presented about the actual costs to landlords for tenant screenings, cleaning fees, and damage repair, so it’s impossible to say at this point whether the high fees today reflect the reality of a landlord’s costs. One landlord today said that he sympathized with tenants but the costs were real for him.

There was much discussion over the costs associated with pets. Some landlords charge an extra move-in fee for pets under the assumption that there will be more cleaning and damage to deal with at the end. Other landlords charge “pet rent,” essentially raising the monthly rent for tenants with pets. Council member Gonzalez in particular was offended by the notion of “pet rent,” and argued for banning it entirely, though she understood the need for landlords to charge some sort of fee for cleaning and damage repair. The Council members felt strongly, however, that service animals should be exempted from pet fees or rent.

The pet conversation surfaces a problem with an overly prescriptive approach: not only does it create additional rules and complexity for both landlords and tenants, but it attempts to assert uniformity over a distinctly diverse set of rental properties.

Much of the damage that a pet could do is indeed limited to the interior of a rented unit, and that could be accounted for with an additional security deposit for pets. But for apartment complexes with public hallways, staircases, and landscaping, pets can dig up plants, pee on carpets and lawns, and carry in fleas and dirt. Landlords can’t wait until the end of a lease to address those; they need to be taken care of on an ongoing basis, and as such are ongoing expenses. That’s a logical argument for a “pet rent” bump up over the base rent when the existence of pets raises the ongoing maintenance costs for a property.  On the other hand, rental properties with no shared public areas, or a property with just a single unit, don’t have those issues.  But blanket bans on “pet rent” or other fees in the name of curbing abuses also take away a landlord’s ability to structure costs and revenues in ways that fit the nature of the property.

We also must recognize that housing markets are cyclical. Right now, it’s absolutely true that all the power is in the hands of the landlords. But in the economic downturns of the early and late 2000’s, the vacancy rate went way up and tenants had much more power than they do today. As you can see from the graph below, as recently as 2010 Seattle landlords were seeing the market rate for rentals drop. 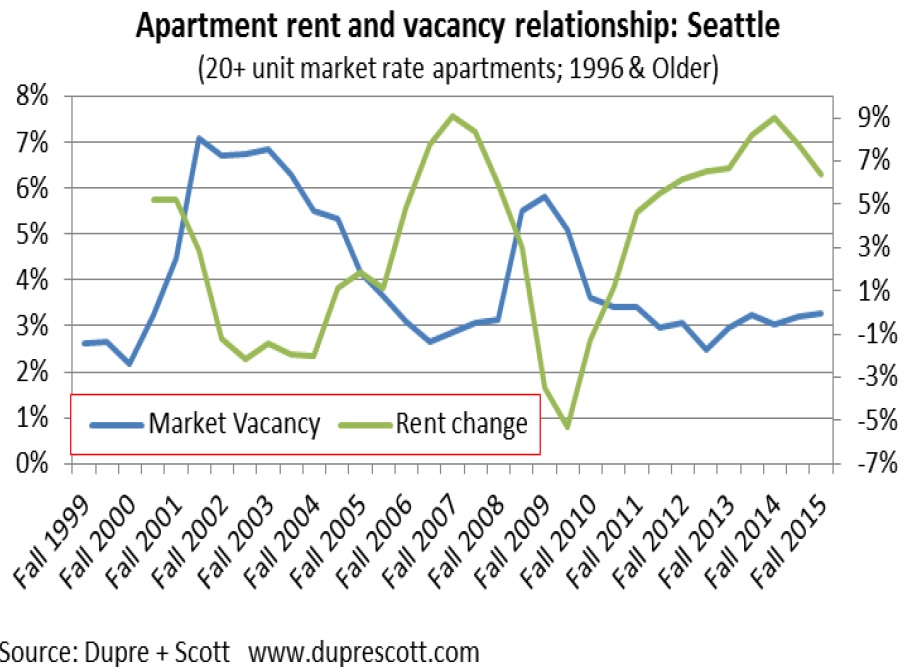 Not only do landlords need to stay afloat now, but they need to make enough money from their properties to sustain them through the downturns in the rental market as well. The city can and should put in place measures to curb the worst abuses, but if it shifts the balance of power too far then it will screw up the long-term economics of the rental market.

Which brings us back to the question posed earlier: how prescriptive should the city be when it comes to rental agreements to try to drive the move-in fee barrier down and shift the balance of power back in the direction of tenants? And the corollary: during the next economic downturn, when vacancies rise, will the Council be willing to take action to rebalance the power dynamics again? Because once you adopt an interventionist strategy, you’ve committed to that approach for the long term, through the entire economic cycle. The Pottery Barn Rule applies: you break it, you bought it.

The right answer is neither extreme intervention nor laissez-faire; it’s somewhere in the messy middle. Many economists argue that the best approach in these situations is to make a series of small adjustments, much as the city is doing with the phasing-in of the minimum wage, rather than a handful of large ones that are more likely to shock the system.

It is worrying, though, that in the Council’s rush to provide much-needed relief to tenants who are truly feeling the pain of high move-in fees, it isn’t stopping to think about the consequences of over-correcting. Right now the most important thing that Seattle can do to address housing affordability is to build more housing at all price points (affordable, market rate, and luxury). An overly rigid regulatory environment that puts economic pressure on landlords today will only serve to discourage investment in growing the rental market inventory. And then we all lose.

The Council needs to ask whether the actions it is taking are enough to help people in need today. But it also needs to be asking whether they are too much.