Parking was on the agenda at yesterday afternoon’s Sustainability and Transportation Committee meeting. As always, people had strong opinions and some fault lines were laid bare.

The context of the discussion was a proposal for a Parking Benefit District in the Capitol Hill neighborhood. Actually, it wasn’t even really a proposal; it was a thought exercise by city staff in response to a request by the Council (also known as a “Statement of Legislative Intent” or SLI) last fall to look into the feasibility of creating parking benefit districts.

A Parking Benefit District is an arrangement where paid parking is installed along public rights of way in a neighborhood, and part of the revenues it raises remains in that community to help pay for upkeep and improvements of its transportation corridors. Sounds simple and great, right?

But here’s what’s really going on. The “urbanist” community* in Seattle, which advocates for neighborhoods (and an entire city, for that matter) that are both affordable and no longer designed around cars,  wants to change zoning rules to lower the minimum amount of off-street parking spaces that new residential and commercial projects are required to build. Doing so will lower the cost of housing construction — and thus make housing more affordable. This, however, makes residents and business owners worry that street parking will be oversubscribed in the neighborhood: residents won’t be able to park near their homes and customers won’t be able to park conveniently to neighborhood shops.  So the Parking Benefit District is a political football the urbanists are tossing to local residents and merchants in the hope that reinvesting parking revenues in the neighborhood to improve streets and access will make them less queasy about the zoning change.

You can read this article in SeattleMet for more on this.

So here’s the problem: parking is always very political, both because people are very possessive about it in their neighborhoods and because there’s real money associated with it. Back in 2010, the city made a bold move and passed an ordinance changing the way paid parking is managed in the city. The Municipal Code now specifies that parking is not to be managed according to revenues; instead it will be managed by performance:

The Director shall establish on-street parking rates and shall adjust parking rates higher (up to the Maximum Hourly Rate) or lower (as low as the Minimum Hourly Rate) in neighborhood parking areas based on measured occupancy so that approximately one or two open spaces are available on each block face throughout the day in order to:

3.Encourage an adequate amount of on-street parking availability for a variety of parking users, efficient use of off-street parking facilities, and enhanced use of transit and other transportation alternatives; and,

The key part is in the first paragraph: the parking rates are established to ensure that there is generally 1-2 open parking spaces on each block face all day. In very busy neighborhoods, the price generally goes up. But the converse is also true: if a neighborhood becomes less busy over time (or even for part of the day or evening, since we now have electronic meters that can charge different prices at different times) then the price can go down.

That is a different outcome from a system managed to maximize revenues: in that system, the rate would be the maximum price that fills all the parking spots.

The other big problem with a revenue-based system is that paid parking (as Council member Sawant pointed out) is one of the most regressive forms of taxes, as it is a price everyone must pay to access popular areas of the city but a much greater burden on poorer people as a fraction of their expenses. That is especially true when the price is jacked up to maximize revenues — and even more so when the revenues stay in the neighborhood where the parking is because it becomes an efficient means for extracting money out of the pockets of poor people and moving it to more expensive neighborhoods.

So paid parking must be managed carefully to avoid creating equity issues within the city. SDOT does this through a two-pronged approach: they manage paid parking to performance goals as previously mentioned, and they invest the revenues in transportation-related projects spread across the entire city.

The city staff works with specific neighborhoods to identify areas with parking overcrowding and implement paid parking to help manage it back to a state where parking is available. They revisit those areas at regular intervals to re-assess the results, and measure both the geographic periphery and the before-and-after hours to see whether adjustments need to be made. Right now, paid parking is highly concentrated in the center of the city and in a handful of chronically overcrowded areas such as the U District and parts of Ballard: 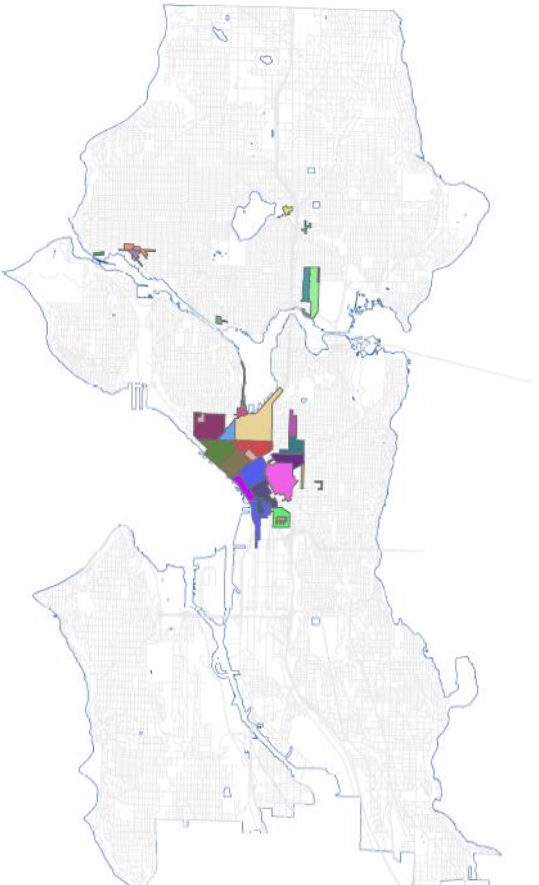 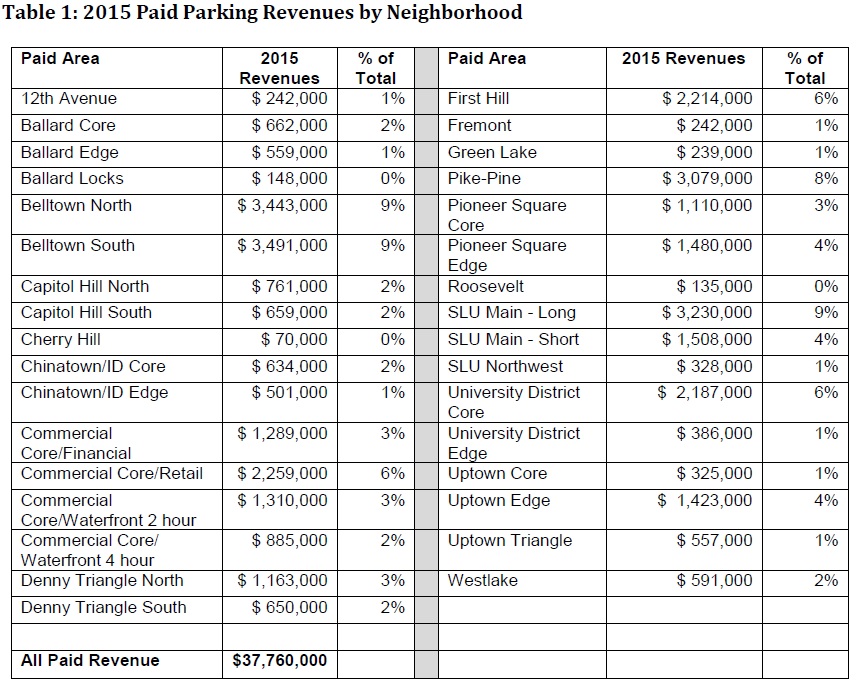 And as one would expect, it’s not evenly divided across Council districts either: 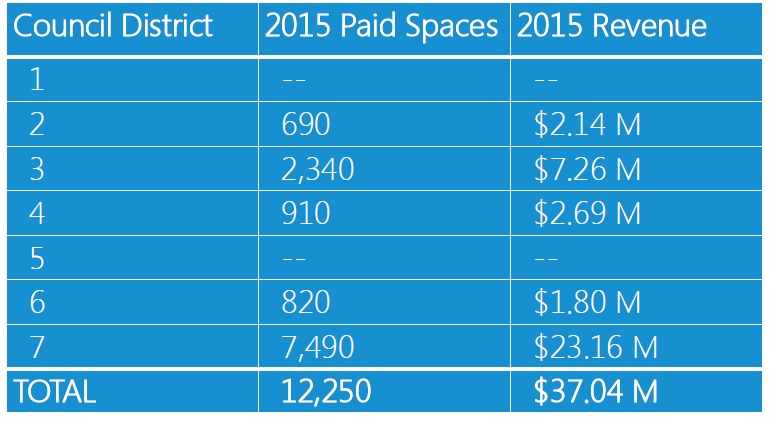 But SDOT claims to be disciplined about spreading the wealth around, and presented the following chart of where the parking revenues are being spent this year: 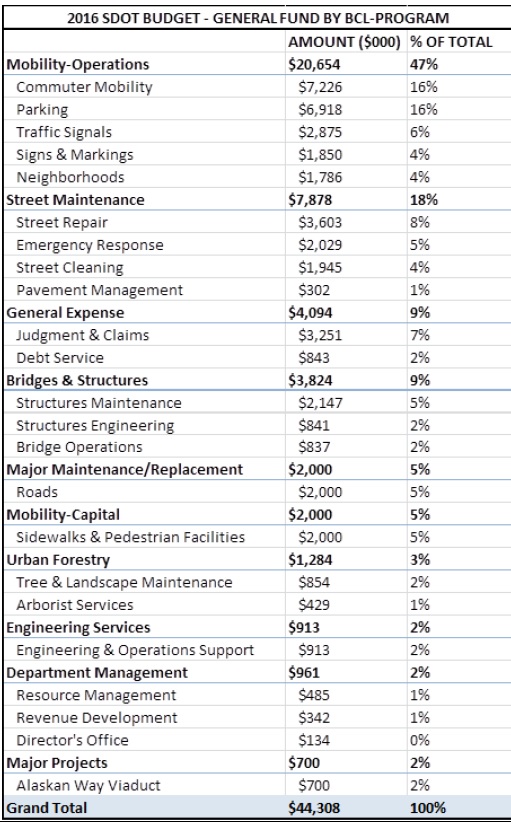 The city staff flatly recommends against Parking Benefit Districts because it would be a switch away from the performance-based model, which is actually working fairly well in the city, it would politicize parking again, and it would create equity issues.

Now here’s where the conversation get more interesting, and more political. The “performance” model of parking stems from Don Shoup, who wrote a book well-known, and highly revered in planning and urbanist circles called The High Cost of Free Parking. So the city staff defend their decision to reject parking benefit districts is because it would be a move away from Shoup’s performance-based model.

Not so fast, say the urbanists — including Council member Rob Johnson. Shoup also recommends parking benefit districts in his book! But SDOT counters that Shoup recommended it as a political means to make the introduction to performance-based paid parking more palatable to communities, not as a political tool for changing zoning. Rest assured, the scholars on both sides will continue to argue this out.

Urbanist Johnson clearly is a big advocate for parking benefit districts, but three of his colleagues were not sold yesterday:  Burgess staunchly supported the current system based purely on performance, and Sawant and O’Brien — typically reliable supporters for urbanist principles — both felt strongly that the equity issues argued against the approach. O’Brien said that he believes the current system is working well; he admitted that this didn’t mean you couldn’t in theory layer a parking benefit district on top of a performance-based system, but he fretted over the questions and issues it would raise.

Johnson also was disappointed that the city didn’t recommend other ideas that the Council had asked them to evaluate, including a “cap and trade” system, potentially connected to a revision of the “restricted parking zone” system used in some places in the city, in order to establish a market for limited on-street parking. O’Brien objected to that notion, saying that he was “intrigued” by the market notion but invoking the principle that the public right-of-way is a communal asset throughout the entire city and should not be apportioned out to residents of specific areas.

There wasn’t any vote today, and O’Brien said that the conversations would continue. But given the lack of enthusiasm from the city staff and from three of the four Council members present, it seems unlikely that we will see any parking benefit districts in Seattle any time soon.

UPDATE: here’s an interesting piece from Sightline arguing for PBD’s.

This is neither the first nor the last skirmish in the war to move Seattle away from cars and single-family neighborhoods to a denser environment with multiple modes of transportation. Johnson and the urbanists look to have lost this one, but it’s far from a devastating loss and with the imminent passing of the 2035 Comprehensive Plan they have still gained a major say in the future direction of urban planning in Seattle.

* This was not intended to be a complete and full definition of a Seattle “urbanist” and the issues that community stands for — rather just listing a couple of issues that are relevant to the topic of parking.