In the first round of Council members’ budget proposals, they collectively submitted over one hundred items. Most of them are straightforward and, frankly, boring; such is the people’s business.  But several proposals deserve more attention, because of either their size, their importance, their virtues, or their tendency to raise eyebrows.

Keep in mind that none of these have actually been approved yet; they have merely been proposed. But they provide interesting insights into the Council members’ thinking.

In no particular order:

Turning the Office of Labor Standards into an agency funded by fees. OLS is staffing up because of its new regulatory enforcement responsibilities. Council member Herbold proposes that a new regulatory fee be levied against all businesses with 10 employees or more, in a tier structure where the fee for companies with 10-25 employees is $265 and the fee for companies with 2500 or more employees is just over $100,000.  The aim is to generate annual revenues of around $6 million. Of course, there’s a flip side: the assessment and collection of the fee needs to be implemented and staffed as well, which would cost $1.4 million in 2017 to put in place and $250,000 annually. Businesses will complain about having to pay a fee to have regulations enforced upon them, but there is plenty of precedent for that (both paying to be regulated, and complaining about it).

Eliminating the special B&O tax rate for “international investment management services.”  This special carve-out was created in 2009, apparently to lure a firm to Seattle. The effective rate on this class of companies would change from .153 percent of gross receipts to .423 percent. The city estimates this would generate about $2 million of additional revenues annually, from the 40-50 companies that fall under this category. As an aside, the Seattle Municipal Code has a patchwork quilt of B&O tax rates for different businesses; this was hardly the only carve-out, though it is the most favorable one.

Capping city salaries at $150,000. This is another Sawant proposal, which would reduce the pay of at least 125 city employees who currently make more than $150,000 a year. Or possibly more employees: at this point the proposal doesn’t state what would happen when overtime pushes an hourly-rate employee over the $150,000 mark.  It also wouldn’t apply to those whose pay is negotiated as part of a collective-bargaining agreement, which accounts for a large fraction of city employees. But a first approximation says that it would save the city $3.3 million a year. Sawant noted that $150,000 is far from a hardship wage, and disagreed with the frequently-stated contention that setting salaries below the market rate for some positions would cause the city to have difficulty attracting and retaining talented people. As she has done before, Sawant invoked the faulty logic that because in the past some people were paid a high salary but did a poor job, therefore there must not be a correlation between wage and talent (which makes her a poor logician, an inexperienced manager, and a lousy economist). But she went further to argue that this will attract people interested in public service rather than personal enrichment — implying that they must be mutually exclusive. Sawant has never hidden her disdain for government employees at the top of the pay scale, yet she has never made an effort to apply the same standard to non-profit housing and human service providers under city contracts. And there are many — including some quite friendly to Sawant — who pay their senior staff over $150,000 a year, including Solid Ground, LIHI, Catholic Community Services, DESC, Sound Mental Health, Union Gospel Mission, and Plymouth Housing Group.

Fully funding the Seattle Human Services Coalition’s “Just and Thriving Communities” budget request.  The SHSC kindly provided the Council with a whole portfolio of requests, mainly to fund its members’ programs. Sawant proposes to fund the entire thing at a cost of $12-13 million, while other Council members (Herbold, Bagshaw, O’Brien, Bagshaw, Juarez, Johnson and Gonzalez)proposed to fund some of the individual line-items. 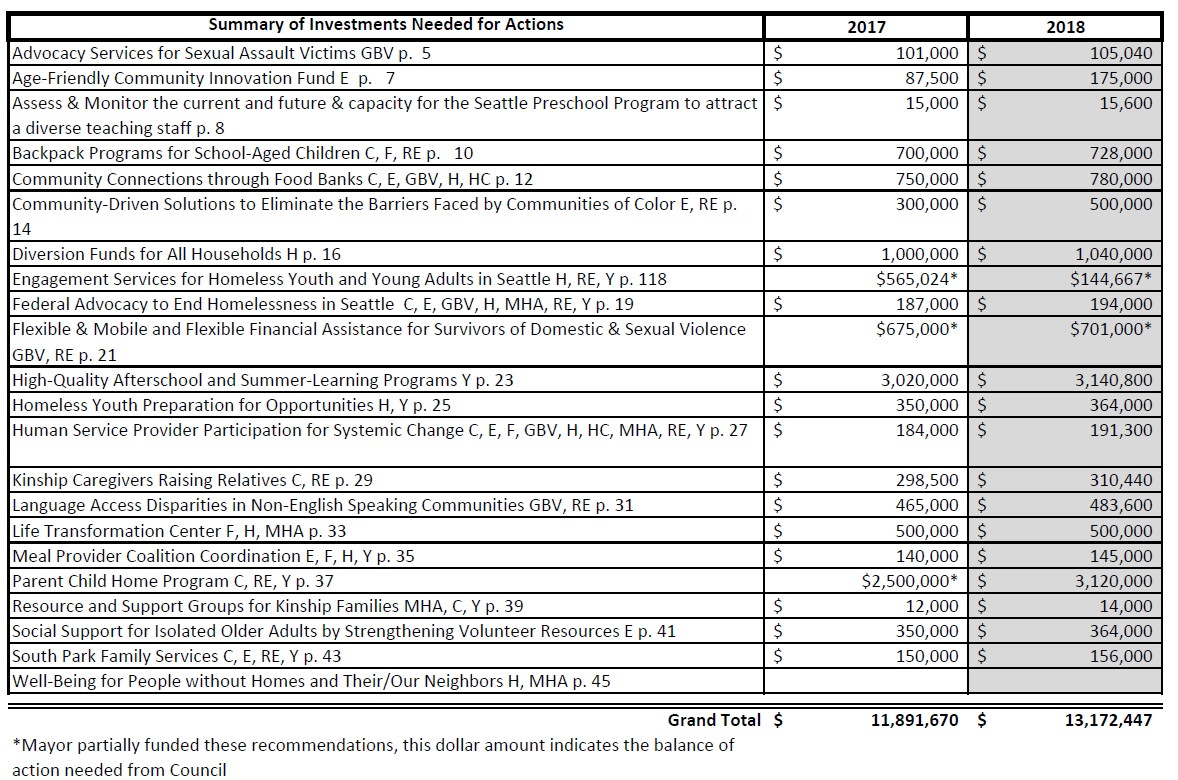 What’s particularly striking about this is that Sawant separately proposed removing the funding in the Mayor’s budget for planning the implementation of Pathways Home next year (just under $500k per year) because she felt it hadn’t been properly vetted — and yet she is more than happy to add $12 million of funding for specific providers without any prior vetting.

All in all, there were 31 changes proposed to the Human Services Department’s budget — 30 of which were additional spending. Perhaps it should be renamed the “Department of Earmarks.” That’s not suggesting that any of the organizations aren’t worthy recipients of public funding for the good work that they are doing, but with so much competition for limited dollars this seems a poor way to make those funding decisions.

educate tenants of their rights under the law, guide tenants in contacting the Seattle Department of Construction and Inspections and the Office of Civil Rights to report violations of their rights, and aid tenants in forming associations or other organizations to engage in collective advocacy.

That last part is important. The Tenants Union is a fantastic organization that does important education and outreach work on behalf of tenants. But it is also an advocacy organization, lobbying local governments (including the City of Seattle) for tenant-protection laws. That’s actually a great thing, and I love that they do that. But should the City of Seattle be funding an organization to lobby the city itself? Also, it should be pointed out that $500,000 is a huge sum of money for the Tenants Union; in 2014 (the most recent year it has released its tax filing for) its entire revenues were just shy of $400,000, so Sawant’s proposal would more than double its resources. Put those data points together with the fact that the Tenants Union routinely signs on to support Sawant’s legislation (and last year former Tenants Union head Jon Grant ran for City Council as a close ally of Sawant) and this particular earmark looks highly suspicious.

Building the Lander Street Overpass. This is a project that has kicked around for nearly a decade, and somehow managed to never get done. But this time it might really happen: most of the $142.5 million price tag has been procured through a combination of public and private funds, with only $27.5 million left. Herbold proposes covering it from the city’s coffers. In fact, she went further: she argued that the Lander Street project is higher priority than the fully-funded City Center streetcar, and suggested that money should be moved over (Bagshaw disagreed on that point). This whole question might be moot, though, since yesterday Chris Hansen rebooted the SODO Arena plan and all-but-promised that the revenues from the Occidental Street vacation would cover the remaining $27.5 million hole in the Lander project budget.  It should be noted that the project is particularly important to Herbold, since the lack of an overpass on that freight corridor frequently snarls traffic on one of the main corridors between her West Seattle district and downtown.

Killing the North Precinct police station, and using the proceeds to build 1000 new units of affordable housing.  I wrote about this proposal from Sawant earlier this week.

Remodeling the 5th Avenue Theatre. This is a proposal from Council member Johnson, which would grant $250,000 to the 5th Avenue Theatre Association (a non-profit) to replace carpeting, install a new sound system, and add a “hearing loop” audio assistance program. Let’s just put it out there: does an organization that charges $55 for the “cheap seats” and $110 for the expensive ones, and has a long list of corporate sponsors and individual patrons, really need public assistance to upgrade its theater? This is an organization that had $25 million in revenues in 2013 and paid its artistic director $300,000. This is not a Hugo House, which Council member Sawant justifiably proposes also receiving a capital grant next year; Hugo House runs on a shoestring budget, and serves youth and underserved communities with writing programs. To his credit, Johnson did say that his proposal would be pending a description of the public benefits the city would receive in return.

Moving forward with Municipal Broadband. Council members Johnson and Sawant joined up on this proposal, which commits $300,000 to develop a 10-year implementation plan for a “fiber to the premises” Internet access network in the city. The city has looked at this before, and concluded that it might break even under just the right circumstances — but the chances of the circumstances being right, including that CenturyTel and Comcast wouldn’t lower prices in order to make it unprofitable, were not a good bet. In the meantime, Comcast and CenturyTel have continued to provide expensive, slow and unreliable Internet access, particularly in the lower-income areas of the city where they are less likely to profit from premium service levels. Sawant stated that her preference would be to simply start building it, but she is deferring to Johnson’s approach to plan it out first. No word on how the other Council members feel at this time, though Harrell did ask whether 5G mobile deployment in the coming years might make this unnecessary.

Increasing the commercial parking tax. Sawant proposes to raise the commercial parking tax from 12.5% to 17.5%. Depending on how much of that is passed on to customers and in turn their response to higher parking rates, the city estimates this would raise between $10 million and $15 million of additional revenues annually. Noting that the State ties the city’s hands in terms of where it can look for additional revenues, Sawant nonetheless stated that Seattle’s current revenues are grossly inadequate and thus she has been searching for additional opportunities to  raise more money that aren’t regressive. She would prefer to tax the wealthy or corporations directly, but she’ll settle for a higher tax on commercial parking as a more progressive approach than raising the sales tax rate.

Implementing a new $25 per FTE employee tax. This is another Sawant proposal to tax companies, in competition at some level with Herbold’s new regulatory fee.

Mitigating the minimum wage increase for nonprofits. As I mentioned earlier this week, Seattle’s move to raise the minimum wage has hurt non-profit service providers who are under contract to deliver specific services at a negotiated price. If those contracts pre-date the increased minimum wage (and many do), then the providers will be short of the money they need to pay their own employees. The city is now factoring that into its new contracts, but there are both older city contracts, and nonprofits under contract to King County, the State of Washington, and the federal government who are underwater. Council member Sawant put forth two proposals: one would spend $11 million to mitigate the under-funding, and the other would cover half of it at $5.5 million with the hope that the other government agencies would step up to cover the rest.

Buying really expensive porta-potties. NASA and the US military would be proud. Council member O’Brien proposes spending $750,000 to acquire and install three Portland Loo style public restrooms, with $50,000 in annual funding to  service and maintain them. One would go to the Ballard Commons, in O’Brien’s district; it would be an important public service to homeless people in the area. The location of the other two would be decided by the Department of Parks and Recreation.