This morning the Council got an update on the revenue side of the budget, and the news was good.

As City Budget Director Ben Noble explained, the Mayor’s proposed budget is based upon 2016 actual revenues through July, projected to the end of the year. But today, armed with almost three month’s more data and new regional and national economic projections, the outlook has changed for the better. 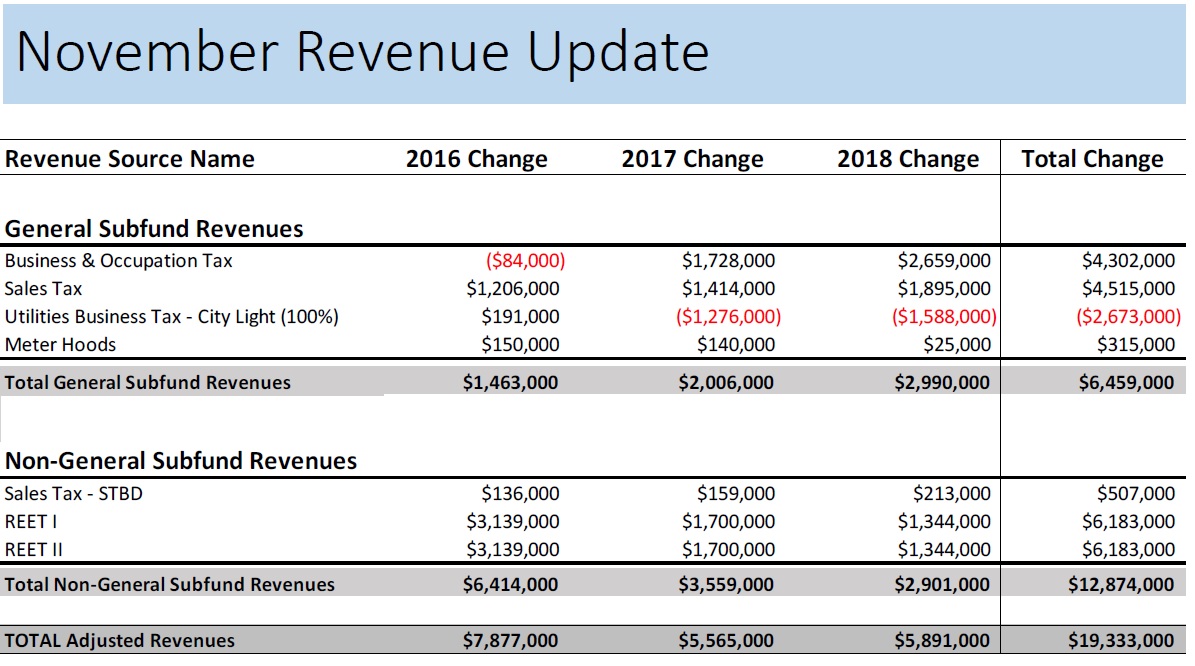 The 2016 projection went up by almost $7.9 million, attributable to sales tax and real estate excise tax (REET).  Behind both of those is the ongoing construction boom. According to Noble, 25% of sales tax revenues come from construction. And completion of big construction projects led to a strong third quarter for REET.

The extra 2016 money goes into the fund balances, which technically the council could choose to spend down in the coming years — or even before the end of this year. The non-general subfund dollars come with restrictions on how they could be spent, though.

Noble also noted that there are some extra expenses this year too. In particular, SDOT had to mitigate a landslide earlier this year, and while they had hoped they could contain the $1.8M cost within their regular budget, as the end of the year approaches it doesn’t appear that they will be able to. At least the SDOT expenses can be paid for with restricted-use REET funds, leaving the unrestricted revenues untouched.

Noble’s forecast for 2017 and 2018 has good news as well, though the story is different. The main driver looking forward is employment. While Amazon has been hiring aggressively, other local employers including Microsoft and Boeing have announced layoffs. Since April the city has been predicting that employment growth will slow, but it continues to defy gravity. Employment growth feeds increases in both the B&O tax and sales taxes, and together the projections for those two went up by almost $9 million over the coming biennium.  Noble is also expecting construction and real estate sales to be stronger than previously forecast, which should add more than $12.3 million of REET.

There was some bad — though expected — news in 2017-2018 as well, coming from Seattle City Light. The utility has been actively promoting conservation, and its success has hit its bottom line. For the past few years it has consistently missed its retail revenue numbers, to the point where it became clear that it needed to adjust its forecast model. Having now done that, its forecast “load” (how much electricity its customers will use) is reduced looking forward. Internally, SCL will adjust rates to balance out its revenues and expenses, but the utility taxes for the next two years will also be shaved more than $2.8 million.

Budget chair Tim Burgess will find the extra funds helpful as he puts the finishing touches on the “initial balancing package” of Council changes to the Mayor’s budget proposal — due to be unveiled on Wednesday.