Yesterday the Human Services and Public Health Committee heard its first update of the Mayor’s “Bridging the Gap” plan, intended to be the interim response to the city’s homelessness crisis until the full “Pathways Home” plan can be rolled out in 2018.

“Bridging the Gap” was announced on October 21st as a response to the Council’s attempts to pass an ordinance that would specify how the city would handle unsanctioned homeless encampments. And it definitely sucked the oxygen out of that effort.

The Mayor’s plan listed over twenty actions the city would take, under four broad headings:

This was a lot to take on, so eight weeks later it’s no surprise that the results are a mixed bag.

On the Safer Alternative Spaces, the city has identified locations for three new sanctioned encampments, but is having great difficulty finding a fourth location. LIHI has been selected to run two of the three sites, and the city is still in discussions on the third. Each of the three sites will be permitted for 12 months with an option to renew for an additional 12 months. The city has begun community outreach. Council member Herbold raised issues about transit access to the new encampment intended for Myers Way, since when an encampment existed there in the past, it heavily stressed the limited bus access to that area. 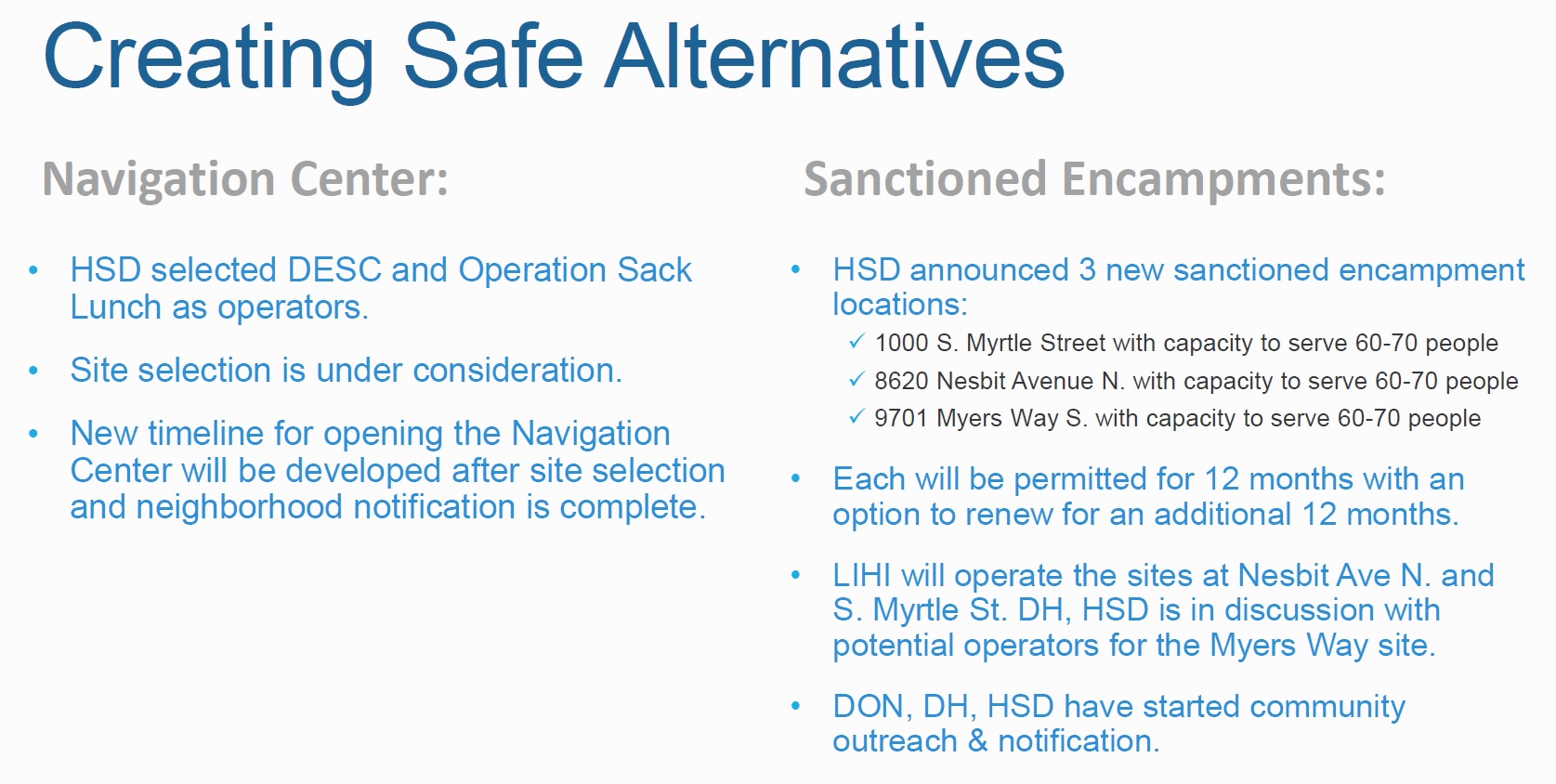 For the Navigation Center, the city has selected two operators: DESC, and Operation Sack Lunch. But they will miss their goal to open by the end of this month because they as yet have been unable to identify a site.  Once they do so (and they seem optimistic that they will in the next few weeks) they will update the timeline for opening.

The Call for Proposals for shelter opportunities issues earlier this week, a few weeks late. The access to shower facilities has already been set up. There was no mention of dedicated shelter space for outreach workers to offer.

On expanded outreach, there was no discussion in yesterday’s briefing, but the presentation slides indicate that there is an effort to develop standards for more coordinated outreach, that HSD will contract for additional outreach workers in January, and three new multi-disciplinary outreach teams are being set up for deployment by March. Also, as promised HSD is developing a training program for all front-line city employees, as well as a “referral card” to be distributed to frontline staff.

The unauthorized encampment removal protocols were of course the hot topic, particularly given a recent news report that the existing process is a “hot mess.” The promised new set of protocols, based upon what was in the Mayor’s October letter to the Council, has been drafted and is being circulated for internal review among city departments. FAS expects to have them ready for the “rulemaking” process in early January, starting with publishing them for public comment. It’s unclear that process will complete by the end of January as originally promised by the Mayor. FAS expects the public response to be “contentious.” 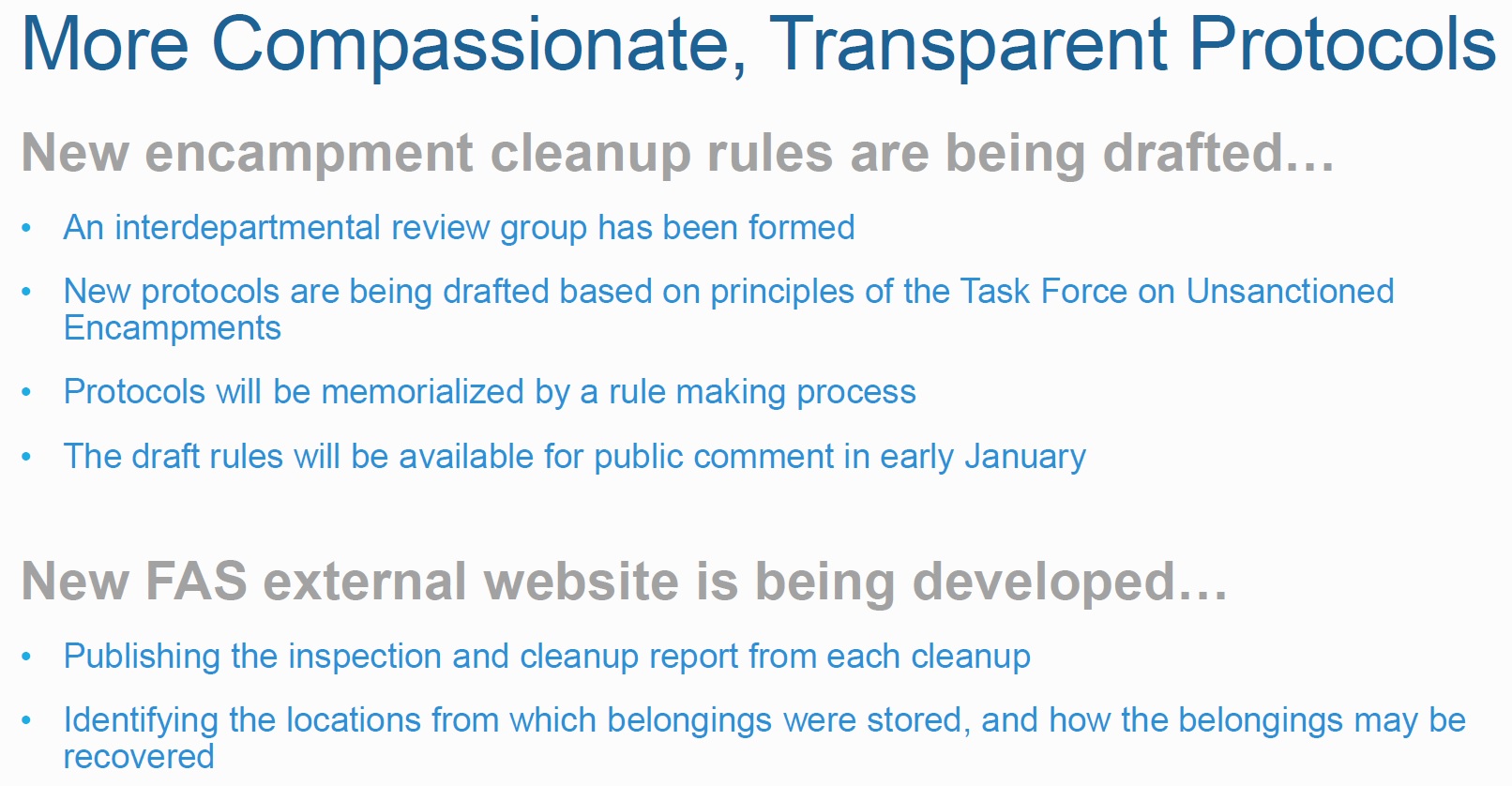 In the meantime, the old MDAR is officially still in place, though FAS says the city is trying to “raise the bar.” Advance notice is being given, including a specific date and time for the cleanup. Outreach happens before and after notice is posted, and outreach workers are part of the multi-disciplinary team that shows up for the actual cleanup. The outreach includes an offer of a safer alternative, but the exact offer varies depending on the person’s specific needs and could be space at a sanctioned encampment, an overnight shelter, or even a motel voucher.

Until recently, staff from the Office of Civil Rights would be part of the cleanup team to monitor the effort. OCR has apparently been disinvited moving forward, and a new position within FAS has been created with the intent to fulfill the same role. FAS said that OCR provided valuable suggestions on how to improve the removal protocols, but as they try to “operationalize” the processes they felt they needed to remove OCR staff from the equation. FAS seemed to believe that the reports it will be publishing after-the-fact of every removal will provide sufficient oversight and accountability, rather than having oversight in-the-moment; Council members, especially Herbold, did not seem convinced, and pushed FAS to look at this issue more.

Council member O’Brien wanted to hear more details on how encampment removals will be prioritized, and FAS promised that the rules would be included in the rulemaking for the protocols in January — though the priority is addressing the health and welfare of both the people in the encampments and those in the surrounding community.

FAS admitted that they were still struggling to implement the system for storage and retrieval of personal belongings. The Mayor had promised that there would be a phone number that someone could call to schedule a time to have their confiscated belongings delivered to them, but the city has not yet been able to put that in place. Also, the web site where removal reports will be posted is still a work in progress. And there was no mention of any work on setting up the new Implementation and Advisory Committee.

For garbage and needle pickup, a representative from SPU explained that they are still experimenting with several efforts. They have been distributing garbage bags at unsanctioned encampments, but have not been getting many of them back. In response, they have been working with encampment residents to designate specific places for them to leave full garbage bags for pickup. This makes it easier for the contractors doing the pickup, as some are uncomfortable entering too far into the encampments for fear of health hazards or dogs. SPU is doing scheduled pickup at three sites, and is looking to expand to 3-4 additional sites in 2017. They have also set up a system where outreach workers or other city staff can call SPU and request garbage bag pickup. Residents can also call 684-CITY or the illegal dumping hotline, and when SPU receives enough calls for a site they will add them to their “illegal dumping hotspot” list and start regularly checking them. Turnaround for pickup requests was around 28 days at the beginning of the year; now it’s less then ten days.

SPU has set up six new needle drop-off boxes across the city in addition to the existing ones at the two transfer stations. And the Parks Department is in the process of siting 5-10 smaller boxes within restrooms at various parks.

To sum up: the city has moved quickly on many of the easier actions, but some of the more challenging ones (and often the ones that will make the biggest difference) are taking longer than expected. And by cutting the Office of Civil Rights out of the picture and taking its sweet time on the Implementation and Advisory Committee, the city has minimized oversight and accountability.

Committee chair Sally Bagshaw seemed satisfied with the progress that had been made; Council members Lisa Herbold and Mike O’Brien less so.

And the excellent question that O’Brien has previously asked is still unanswered: after we declare that certain public spaces are entirely unacceptable for unsanctioned encampments, have we left enough space for the 3000 people who are currently living unsheltered in our city? If not, then we have guaranteed that we will be constantly chasing homeless people from one unacceptable place to another. The city has not produced any estimate of how much public space is off-limits to the homeless and how much is left. Since at the current pace of rolling out the Pathways Home effort we will have at least a year before it has made a meaningful impact on the homeless crisis, we need to make some well-informed decisions about where we want our city’s unsheltered homeless population to reside.