This morning the Office of Intergovernmental Relations (OIR) brought their “federal team” to present to the City Council on what the Trump Administration, together with a Republican-controlled Congress, will mean for Seattle. The most frequently used word to describe it: “sobering.”

You can find their full presentation here, and the video here.

They began with a calendar of key dates over the next few months. 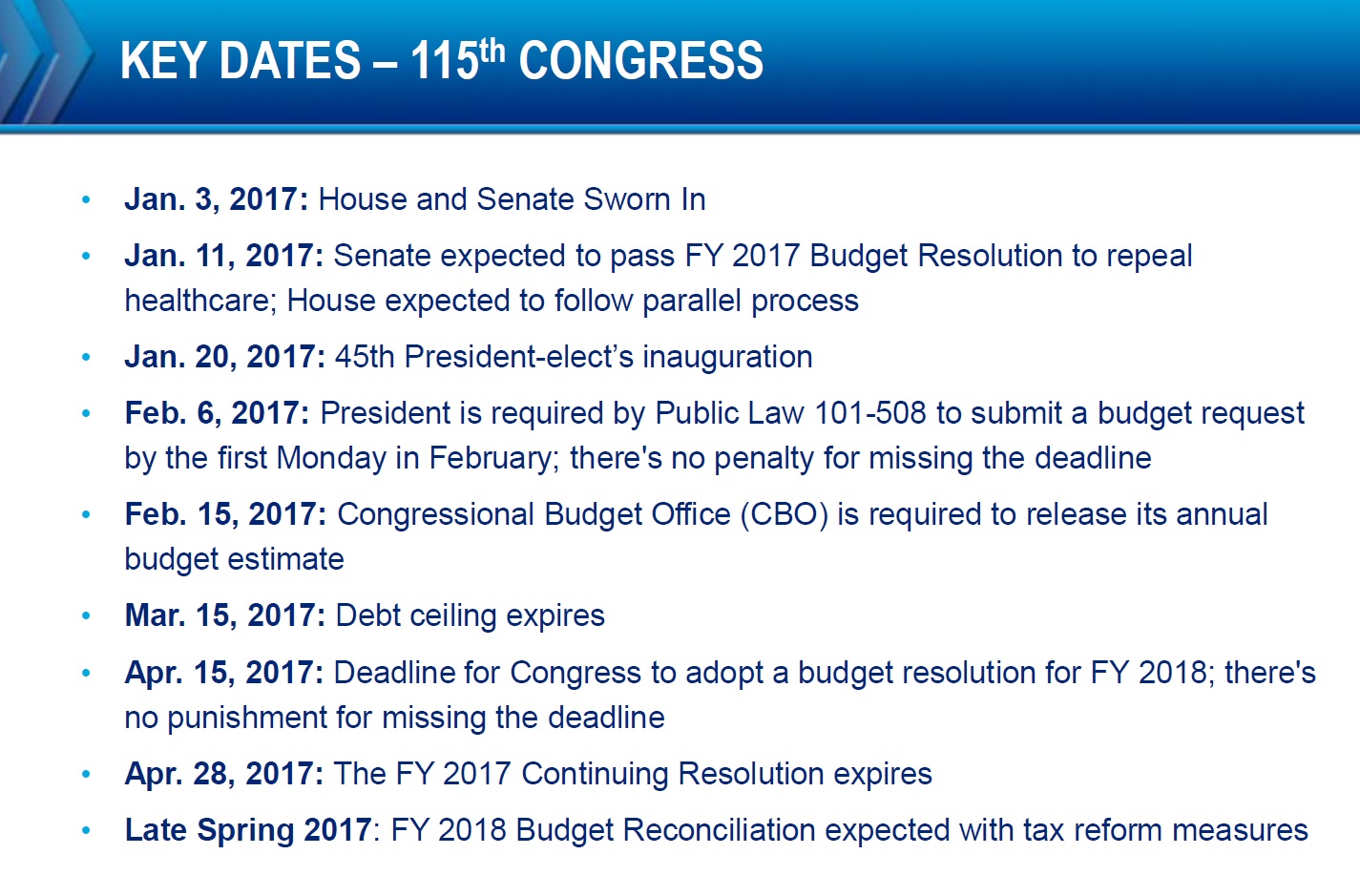 OIR expects Congress to start the process of repealing Obamacare this week (more on this later).

Confirmation hearings are also this week. Trump and the Republicans are using a deliberate strategy of packing them in so that no one nomination can draw too much attention; that’s not unprecedented, but it is unprecedented to do it without a full ethics review. Traditionally, they said, the ethics reviews have been easier because most nominees had previously served in government. But since several of Trumps’ nominees have never served in government before, and are extremely wealthy with large, complicated investment portfolios, the ethics reviews are challenging to complete. Unfortunately, the Democrats changed the rules during the Obama administration so only a simple majority is required to approve a nomination, so Trump’s picks are expected to be confirmed without much trouble. 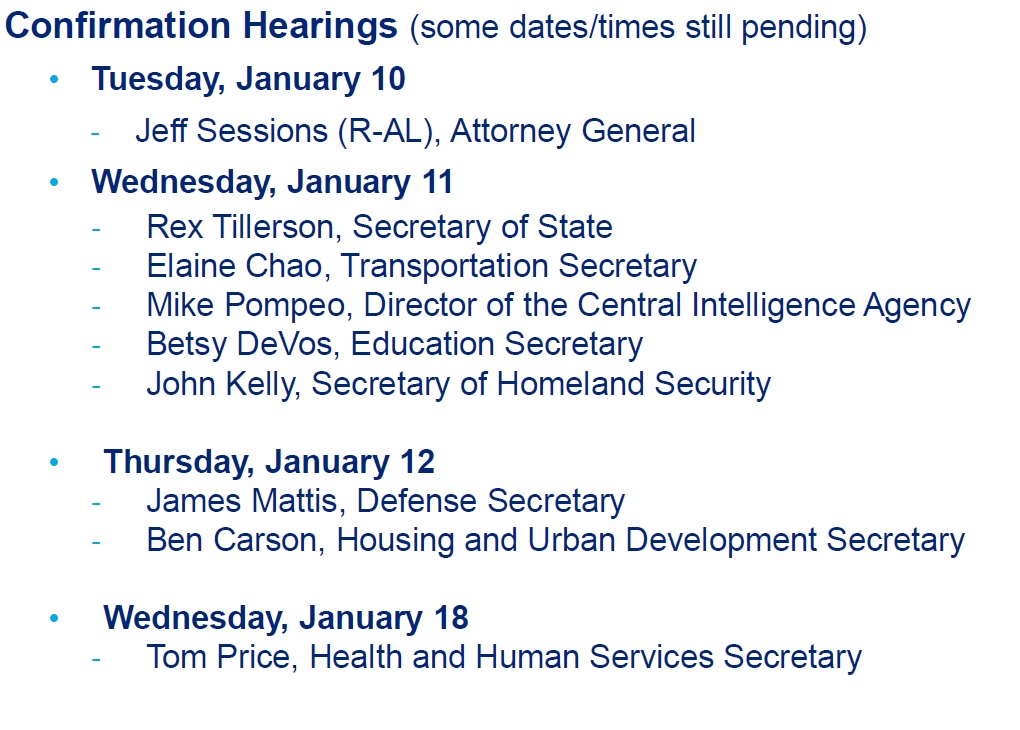 The President is required to submit a budget proposal the first week of February; the OIR team expects that to be delayed, but there is no penalty that the Trump administration suffers for missing the deadline. However, on March 15th the debt ceiling expires, and on April 28th the Continuing Resolution to fund the government. Either or both of those deadlines could provoke a showdown, and even possibly a government shutdown. In the meantime, Trump and Congress will need to work on 2018 budget issues.

The OIR team has a list of issues that they are already tracking:

On healthcare reform: the Republicans are expected to repeal the Affordable Care Act (aka Obamacare) and give themselves 2-4 years to replace it. OIR notes that doing so will have a significant impact to the country; by one report, it could cost $140 million of healthcare spending and 2.6 million jobs. 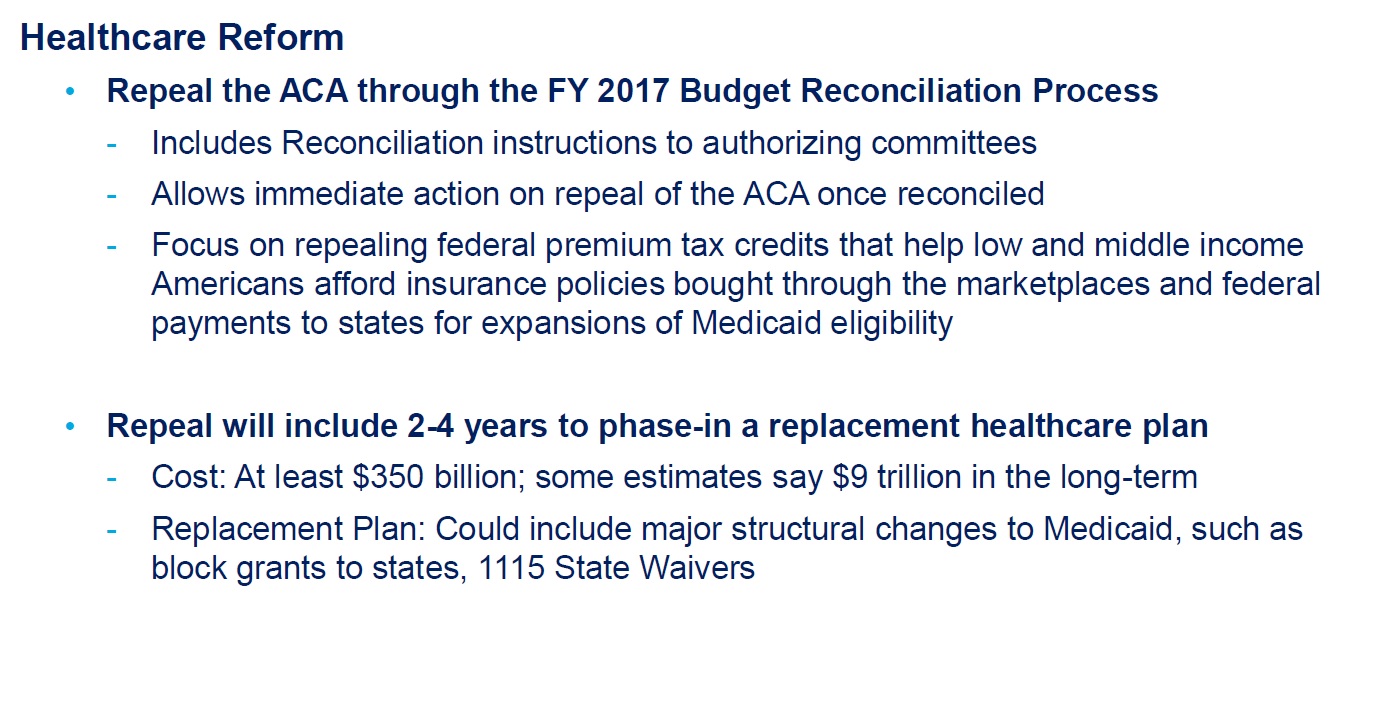 On tax reform: the Republicans are floating several ideas, including cuts to income and corporate tax rates and eliminating the estate tax, They are also considering eliminating the tax exempt status on municipal bonds, which could provide significant revenues for federal programs (such as the replacement for the ACA) but at a cost to cities. On the bright side, there is bipartisan support to retain the low-income tax credit. 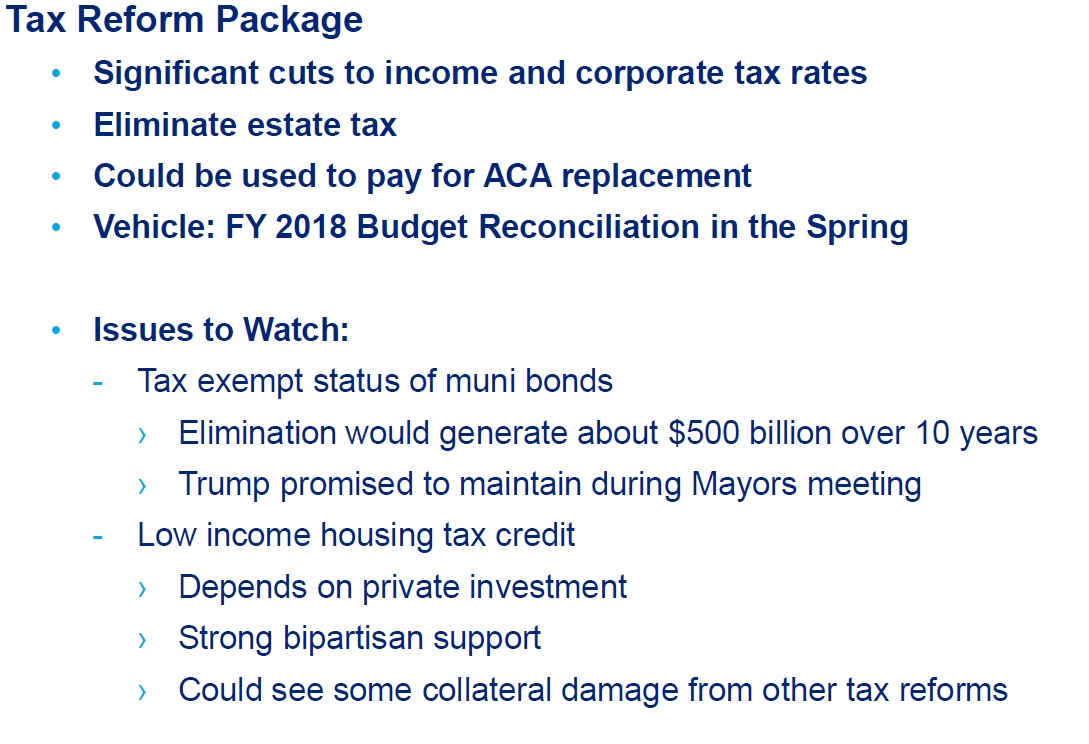 On immigration: the big question is how serious Trump is about deporting undocumented immigrants. The good news is that there is a bipartisan effort, led by Republican Lindsay Graham and Democrat Dick Durbin, to protect DACA recipients for three years, called the Bridge Act. It is being carefully shepherded through to keep it deliberately bipartisan in its sponsorship. 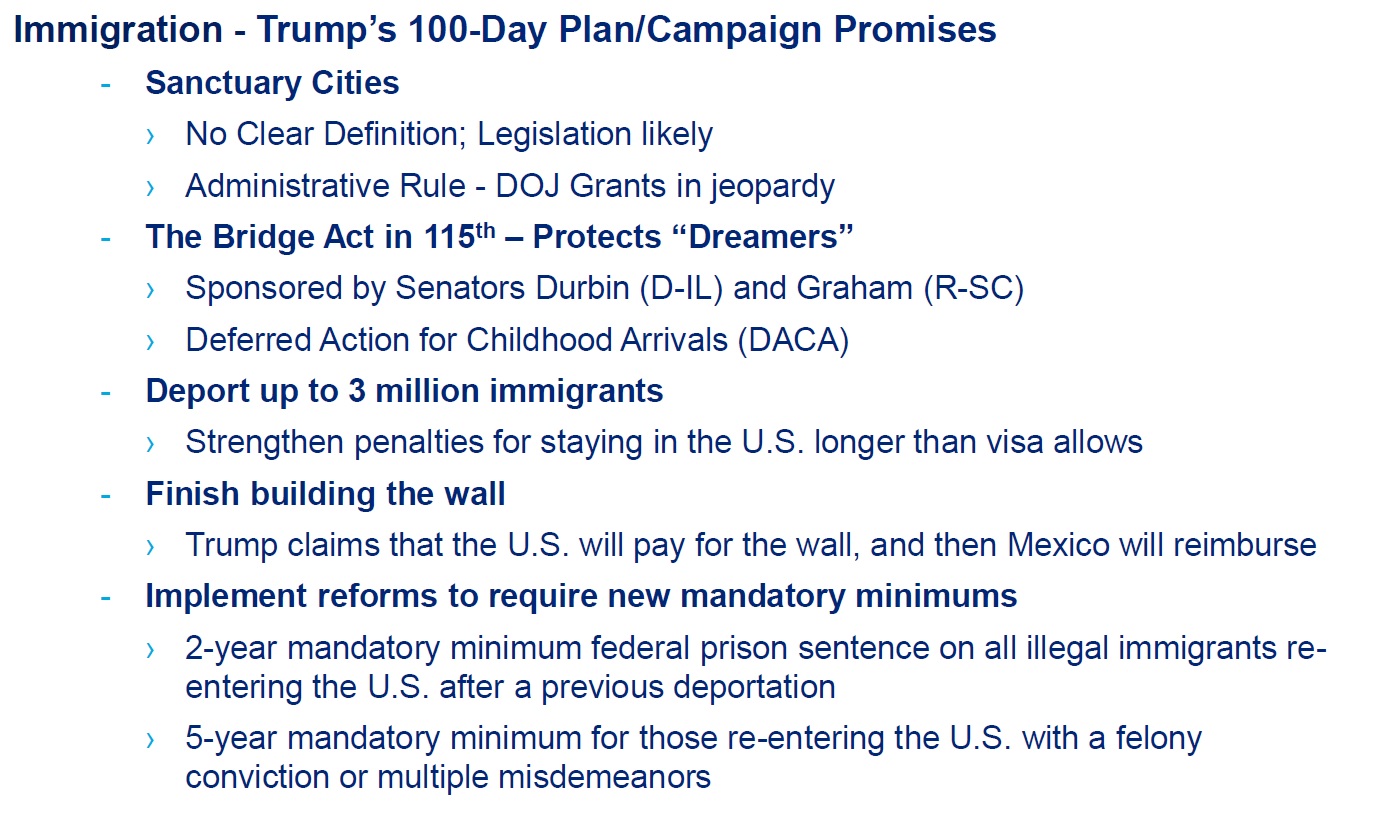 Civil rights is one of the most depressing areas to consider under a Trump administration, with Jeff Session as the presumptive Attorney General.  It begins with Trump’s Supreme Court appointment which will re-establish a 5-4 conservative lean for the court, and if he gets the opportunity to nominate another Justice could push the court even further to the right. On top of that, House Speaker Paul Ryan has announced his plans to de-fund Planned Parenthood (despite the fact that by law federal funds already may not be used for abortions). And then there’s Sessions, who is stridently anti-LGBT, and is also likely to de-prioritize the Department of Justice’s focus on constitutional policing. Other administration officials have equally horrific records on civil rights. 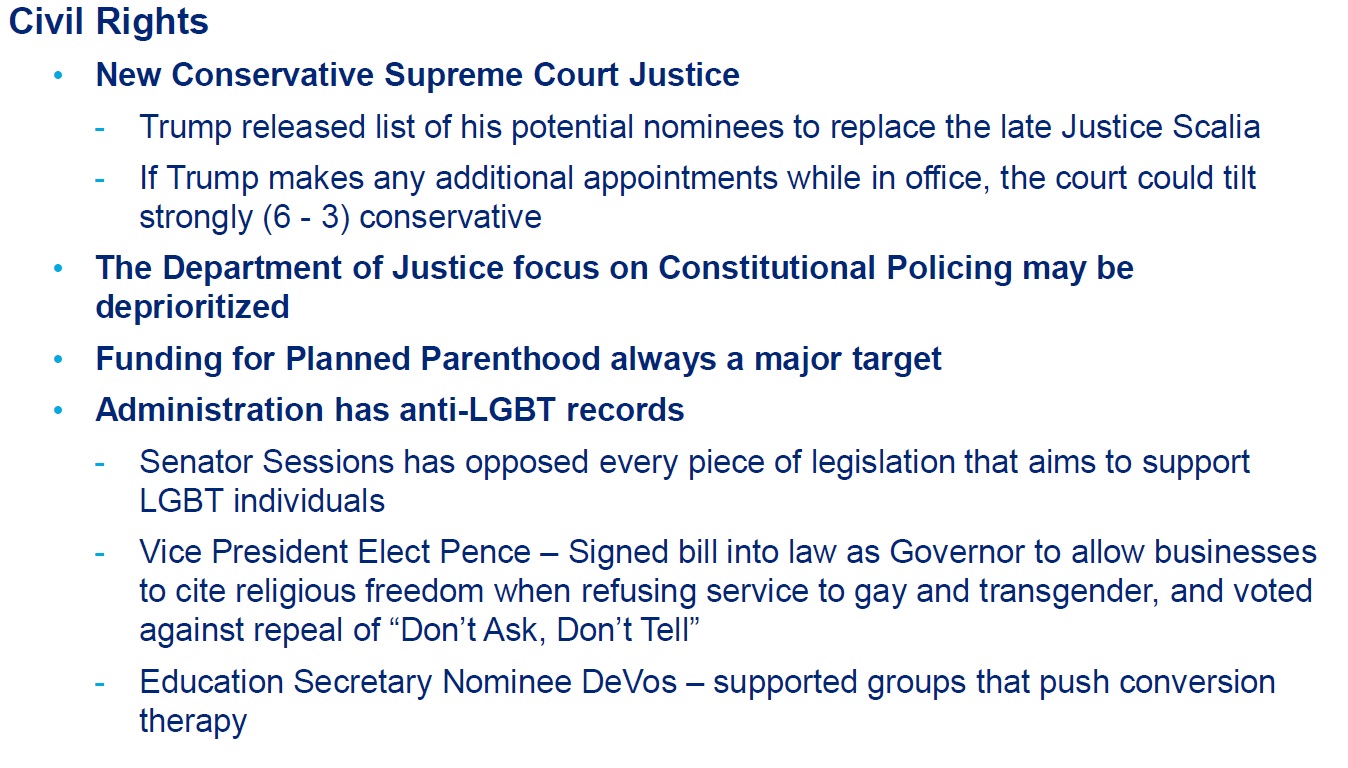 One somewhat bright spot may be public infrastructure projects. Trump campaigned on a $1 trillion infrastructure program, but he apparently wants to fund it through tax credits to developers, which wouldn’t help rural areas of the country. The issue is likely to get deferred for some time, but when it is taken up, Democrats will push to make it as broad as possible, including water, broadband, grid/smart cities projects, and possibly affordable housing. It might even include energy, depending on how the projects are framed, Democrats are also likely to push for direct spending rather than tax credits.

On housing and the homeless:  the presumptive new head of HUD, Ben Carson, has indicated that he will work on rolling back fair housing rules. And Speaker Ryan’s “anti-poverty plan” would tighten up rules around welfare, though it might also expand the Earned Income Tax Credit (EITC), which would generally be welcome (though Sawant pointed out that it is nowhere near as effective in addressing poverty as direct help/subsidies to families). 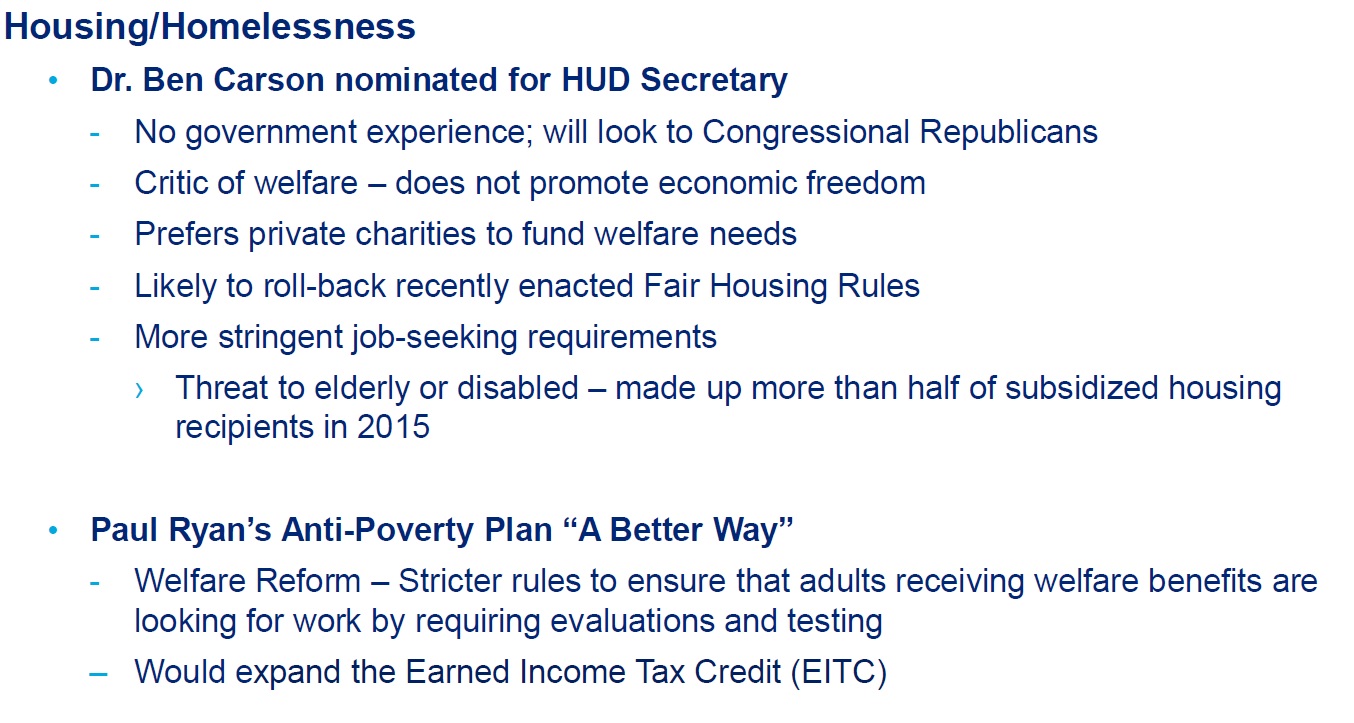 With all that bad news, the OIR team is pushing forward, building a list of priorities by the end of February. They are collecting city departments’ priorities, and will be gathering information for the nine Council members as well, culminating in a letter Congress encapsulating Seattle’s stated legislative priorities. 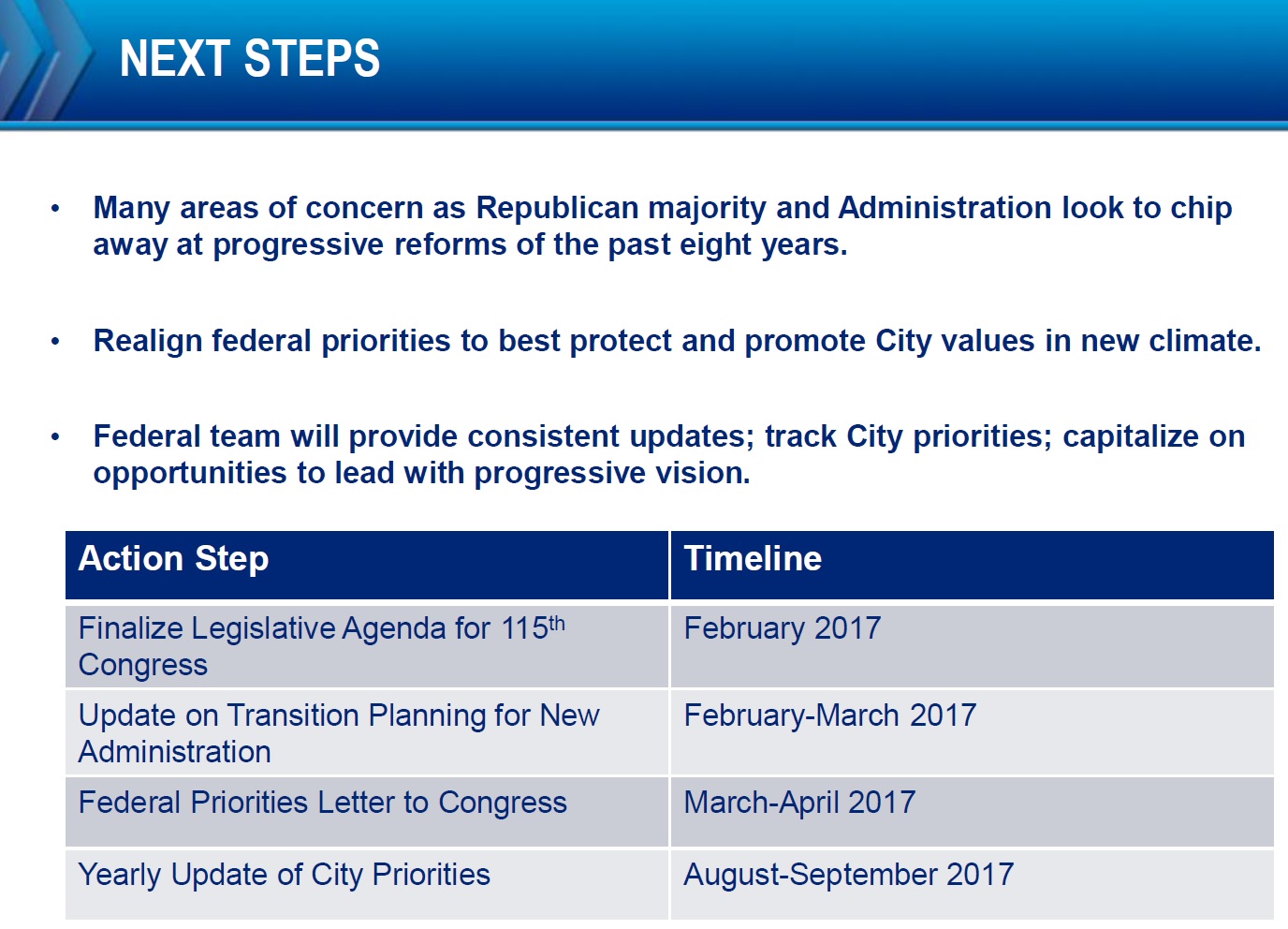 Here’s a sample of what they have heard from city departments so far: 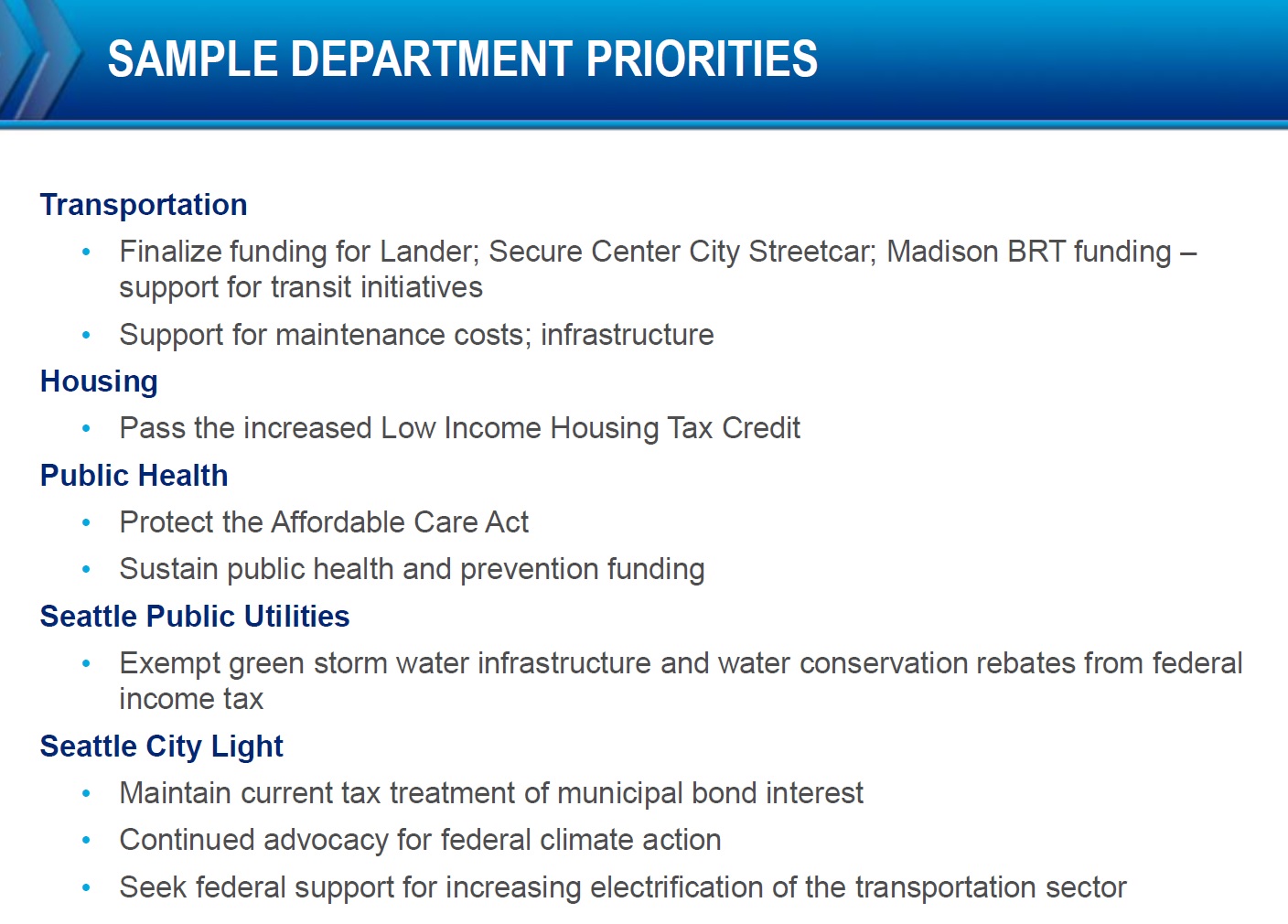 OIR pointed out that they are working closely with many other peer cities that share Seattle’s “progressive values,” policies and priorities, so that they can speak with one voice in Washington, D.C. They are also reaching out to more rural communities to “maximize our reach.”

The conversation wrapped up with a discussion of the “sanctuary city” issue, where Trump has threatened to hold back federal funding for so-called sanctuary cities. OIR said that some of Trumps’ rhetoric has already been walked back, and it’s very uncertain at this time how much of the threat is real. Both Juarez and Gonzalez claimed that if the Trump administration’s standard for withholding funds is discriminatory, then the city has standing to sue the federal government — and both felt comfortable going there if necessary.

Council president Harrell closed the meeting by noting that this year the Council will work much more closely with OIR’s federal team than it has in the past to “tighten up our federal priorities.” They certainly will be swimming upstream this year.