What happens when a police force exhausts the resources it can deploy to handle a crisis situation such as a riot, a larger-than-expected mass action event, or a natural disaster? Most police departments use “mutual aid” agreements to call on neighboring police departments as needed to supplement their own resources. These agreements benefit small towns and large cities alike, not to mention special public-safety organizations such as the Port of Seattle Police. But they can also create issues when the two departments work under different policies. This has come up twice for the Seattle Police Department, and by extension the City Council, in the last three days.

The first was Saturday evening, when a spontaneous protest gathered at Sea-Tac Airport in response to President Trump’s executive order restricting travel from several majority-Muslim countries. Invoking their mutual aid agreements, Port of Seattle police called in reinforcements from several neighboring cities, including Seattle. The protesters were non-violent, but during the several-hour protest they did attempt to block the entrances to security checkpoints and the exits from the secure areas of the terminal. For the most part the police response was measured, but there are reports of some isolated incidents of pepper spray being used on some protesters and other violent acts by police, as well as a handful of arrests.  The official SPD response is that none of the SPD officers used pepper spray or made any arrests, though they did use bicycles to form barriers to corral in protesters (an action which as a matter of routine is being reviewed for appropriateness). 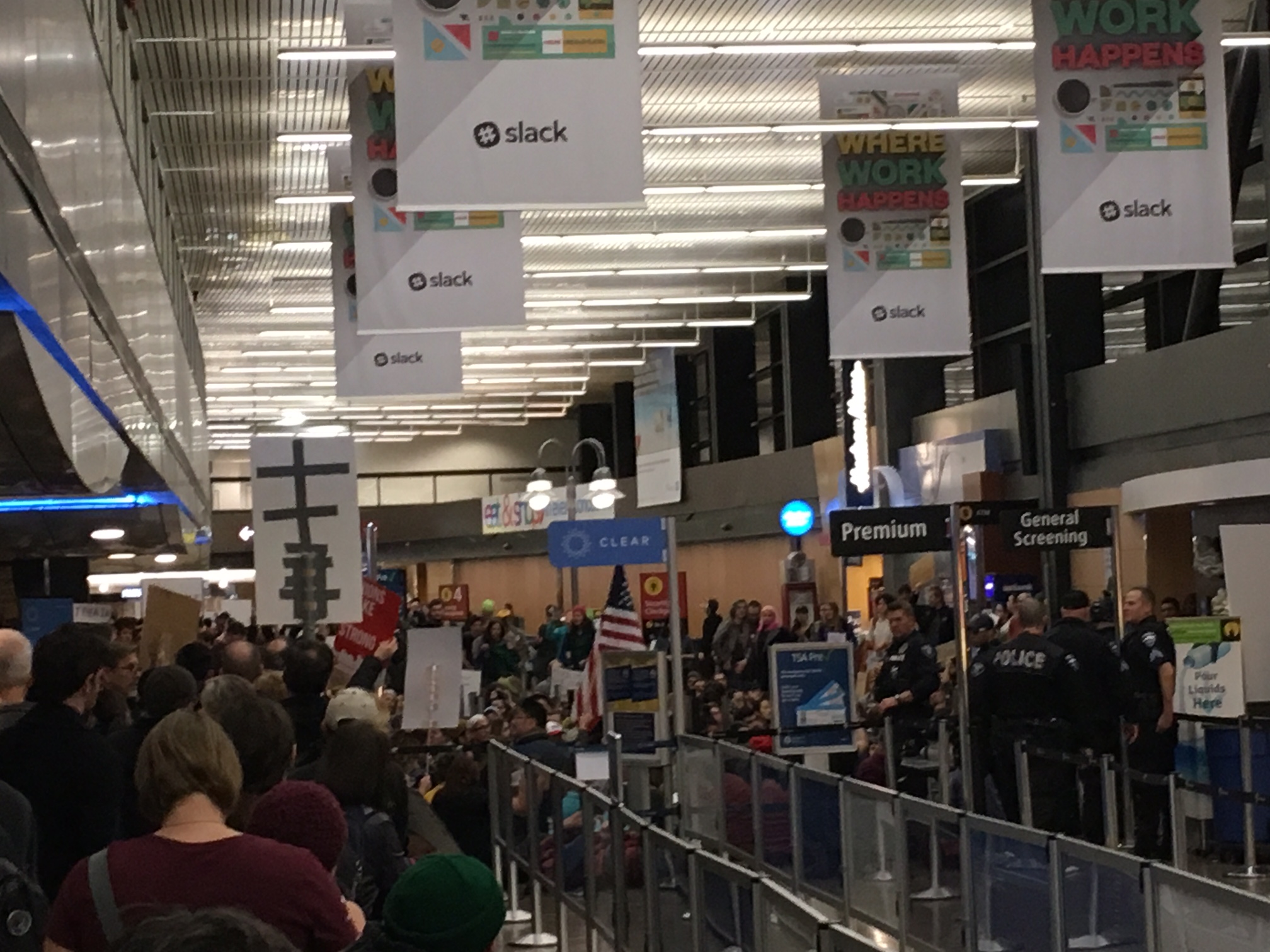 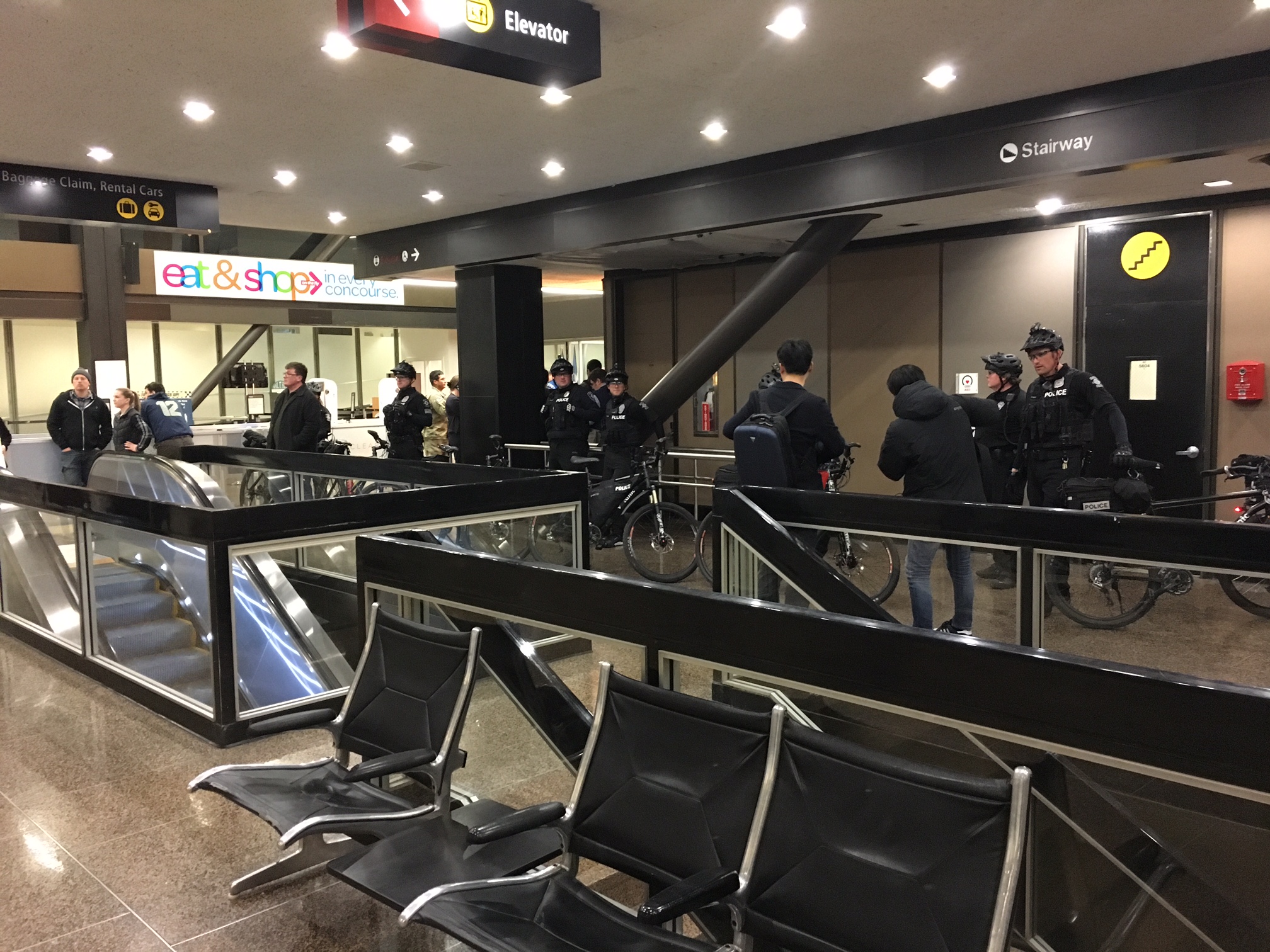 The second came up today in the context of the resolution the City Council passed today affirming Seattle as a “welcoming city.” The resolution makes clear that SPD will not sign a “Section 287(g)” agreement with the federal Immigration and Customs Enforcement (ICE) which would authorize local police officers to enforce federal immigration laws.

Both of these cases point to the same issue: what happens when police departments are jointly responding to an incident through a mutual aid agreement, but the departments operate under different policies?

It’s important to distinguish between “laws” and “policies” here. When a police department is called into another jurisdiction under a mutual aid agreement, the laws that are being enforced are those of the “host” jurisdiction.  Laws that apply to civilians are geographic; they don’t travel with police officers. But some of  the laws and many of the departmental policies that apply to the conduct of officers do follow them when they are on loan to another jurisdiction.  For example: SPD officers are not allowed to inquire as to someone’s immigration status — even when they are working in a jurisdiction that does allow officers to do that, or might even have signed a Section 287(g) agreement with ICE. But the reverse is tricky: when an officer whose home jurisdiction allows for inquiring about immigration status is on loan to Seattle, can they exercise that ability here?

Seattle has been working hard on improving its “community policing” practices as well as taking a more measured approach to policing protests and political rallies. But what rules of conduct apply to other jurisdictions’ officers when helping out with a large protest march here? And if you think the answer is “the host jurisdiction’s,” then doesn’t that principle also apply when SPD officers were helping out Saturday night at the airport?

This just got messy.

In practice, the rules are sorted out by the written “mutual aid” agreements between the two departments. Though at the state level, there are actually two other “fallback” mutual aid arrangements that apply: an Intrastate Mutual Aid System that any jurisdiction can invoke in a declared emergency, with a basic set of rules and no need for a pre-arranged mutual aid agreement; and the Washington State Law Enforcement Mobilization plan which can be activated by the head of the Washington State Patrol upon determination that a jurisdiction within the state has exhausted its own resources. Any mutual aid agreements worked out directly between two jurisdictions take precedence over the Intrastate Mutual Aid System, and that’s a mechanism through which policies can get aligned.

To that end, the “Welcoming City” resolution calls for SPD to prepare a report for the Council that includes all of the department’s mutual aid agreements, a list of which ones are with jurisdictions that have Section 287(g) agreements with ICE, and proposed amendments to the mutual aid agreements to rationalize differences in policies with regard to enforcing federal immigration law.

In this morning’s Council Briefing, the Council members took a longer digression into the messier areas of potential policy misalignments stemming from mutual aid agreements. Council member O’Brien was the first to raise concerns about policy conflicts like the kind that arose Saturday at the airport. Gonzalez pointed out the difficulty, noting that even though every jurisdiction wants it both ways (our rules apply to our officers everywhere they go, and to everyone else’s officers here), Seattle can’t be so “heavy-handed” with its mutual aid agreements that no other jurisdiction is willing to sign one with the city; finding the right balance is key.

But Council member Sawant threw a grenade into the middle of the conversation, suggesting that SPD should not be allowed to police anti-Trump protests. Council member Burgess responded sharply, arguing that it’s very dangerous to “overlay a political agenda on top of police policies and mutual aid agreements… we can express our disdain for the Trump administration but still support proper policing.” Sawant retorted that both sending police to an anti-Trump protest, and also not sending them, are political acts. She suggested that the protest movement is “our only defense against Trump” and the only hope to put a stop to Trump’s agenda.  “You just need to pick a side.”

(The ACLU might disagree with Sawant’s assertion that the protest movement is the only hope; they had an impressive string of successes in court over the weekend)

Fortunately, none of the other Council members threw their support behind Sawant’s position. Council member Herbold joined Gonzalez in arguing for a nuanced search for the right balance, though she voiced her concern about cases where SPD officers are asked to aid another jurisdiction when a clear public safety need hasn’t been articulated and the city’s officers become a “chilling force” against free speech rather than an essential support for public safety.

This conversation is just getting started, and we will no doubt hear much more on the topic of mutual aid agreements. The report requested in today’s resolution, due by February 15th, will be an important tool, as it will inject a flood of information about SPD’s current mutual aid agreements and the immigration law policies of those other jurisdictions. Understanding and rationalizing the other policies, such as use of force, de-escalation, and community policing, will be trickier. Don’t be surprised if Gonzalez folds that issue into the deliberations on the upcoming police accountability legislation.