As part of the city’s “digital equity” push, in 2015 Seattle explored creating its own public internet access provider to compete with Comcast, CenturyTel, and other private companies and ensure that high-speed broadband was available uniformly across the city. However, that approach was shown to be infeasible, so the Mayor shelved the plan — despite the loud protests from Council member Sawant.

Now the City is discussing a different, creative approach that might accomplish much of the same digital equity goal.

On one hand, the city is hesitant to trust the private companies to roll out broadband services widely; history has shown that they will de-prioritize low-income areas because the lower percentage of households that can afford their service makes the up-front infrastructure investment less profitable. But on the other hand, the upfront costs to the city of deploying a city-wide broadband utility runs into the hundreds of millions of dollars. In a city with a severe housing crisis, that’s a lot of money that could be spent elsewhere on high-priority needs.

So they recently came up with a new, more surgical approach. The city has issued a Request for Information “to gauge the interest of for-profit and non-profit entities in forming collaborations or partnerships with the City to enable the deployment of wireless services in Seattle.”

In a nutshell: they have identified eighteen high-priority areas of the city where they would consider deploying free or low-cost wireless internet access: twelve residential districts and six public parks. Those areas are: 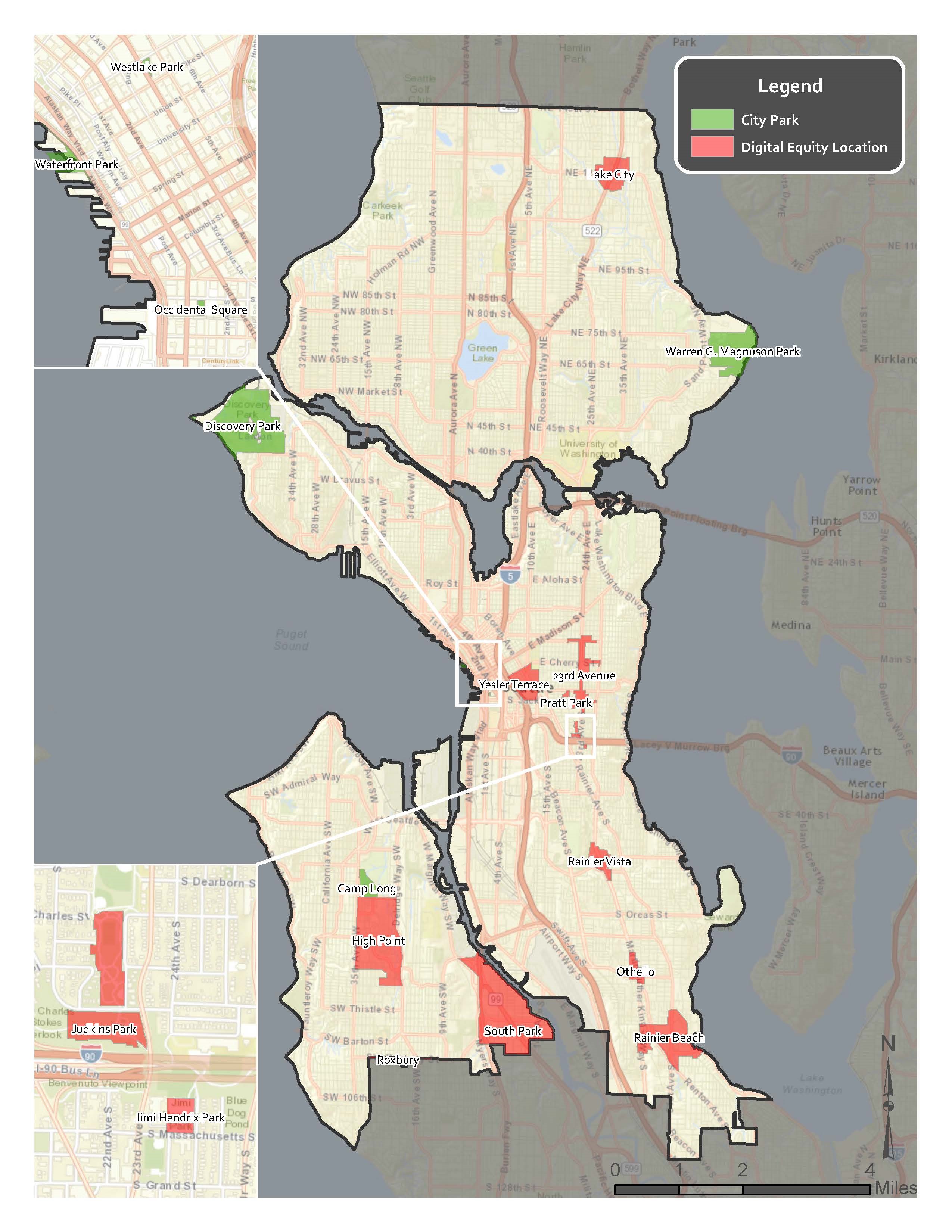 The full RFI has a description of each of these areas and why it made the priority list. The city is happy to talk about covering other areas of the city as well.

It’s significant that this is an “RFI” not a “RFP.” At this point the city wants to solicit specific ideas for how wireless coverage might be extended to cover these areas, who might be willing to partner on such a system, and what the up-front and ongoing costs might be to build and operate it at no-cost or low-cost to residents. As it says in the RFI, “The City is seeking ideas from the private sector with regard to ways that public and private sectors can work together, with the City as facilitator, enabler, and potential partner to the private sector, in deploying wireless network infrastructure to support key goals.”

The city brings to the table some important assets, including Seattle City Light poles, park buildings, and a fair amount of wiring and fiber-optic cabling in the ground that it’s willing to pitch in. The RFI notes that the city would prefer not to contribute up-front capital for the build-out, but doesn’t rule out that possibility altogether. The hope — a reasonable one — is that using wireless infrastructure to reach into homes will dramatically reduce both the cost of the system and the time it would take to build it out. It also reduces the bandwidth; this kind of system won’t be gigabit, at least not with current systems. But it would be plenty fast enough to allow Seattle Public School kids to use the Internet at home to work on assignments, rather than have to go to libraries or community centers.

The RFI asks for responses by February 28th, at which point the city will evaluate the responses, formulate a plan and budget if they like what they heard, and possibly move forward with an RFP to get bids to build it out.