Since its inception last fall, the City of Seattle’s “Bridging the Gap” interim plan for addressing the homelessness crisis in the city has had its ups and downs — and mostly downs. But based on the team’s report to the City Council last week, it may finally be finding its feet.

The Leadership of the Bridging the Gap effort, including Director of Homelessness George Scarola, public safety special assistant to the Mayor Scott Lindsay, FAS Director of Operations Chris Potter, SPU Director of planning and program management Susan Fife-Ferris, and REACH co-director Chloe Gale, came to the Council’s Human Services and Public Health Committee to provide a status update. Unlike past briefings, this time they had a fair amount of good news to share about the progress they have recently made.

The MVP award goes to Seattle Public Utilities.  Its trash and needle pickup programs have found their rhythm and are starting to expand service as needed. The now have scheduled trash pickups at five large unsanctioned encampment locations, and have been doing on-request pickups at other locations. They plan to expand scheduled pickup to three more locations this year.  These pickup aren’t trivial: outreach staff must first visit the site and identify a location in the public right-of-way that is accessible by SPU staff but physically separated from the encampments themselves in order to avoid picking up personal belongings by accident. In some large locations they are placing dumpsters; in others, they distribute garbage bags to residents along with instructions on when and where to deposit the filled ones for pickup. 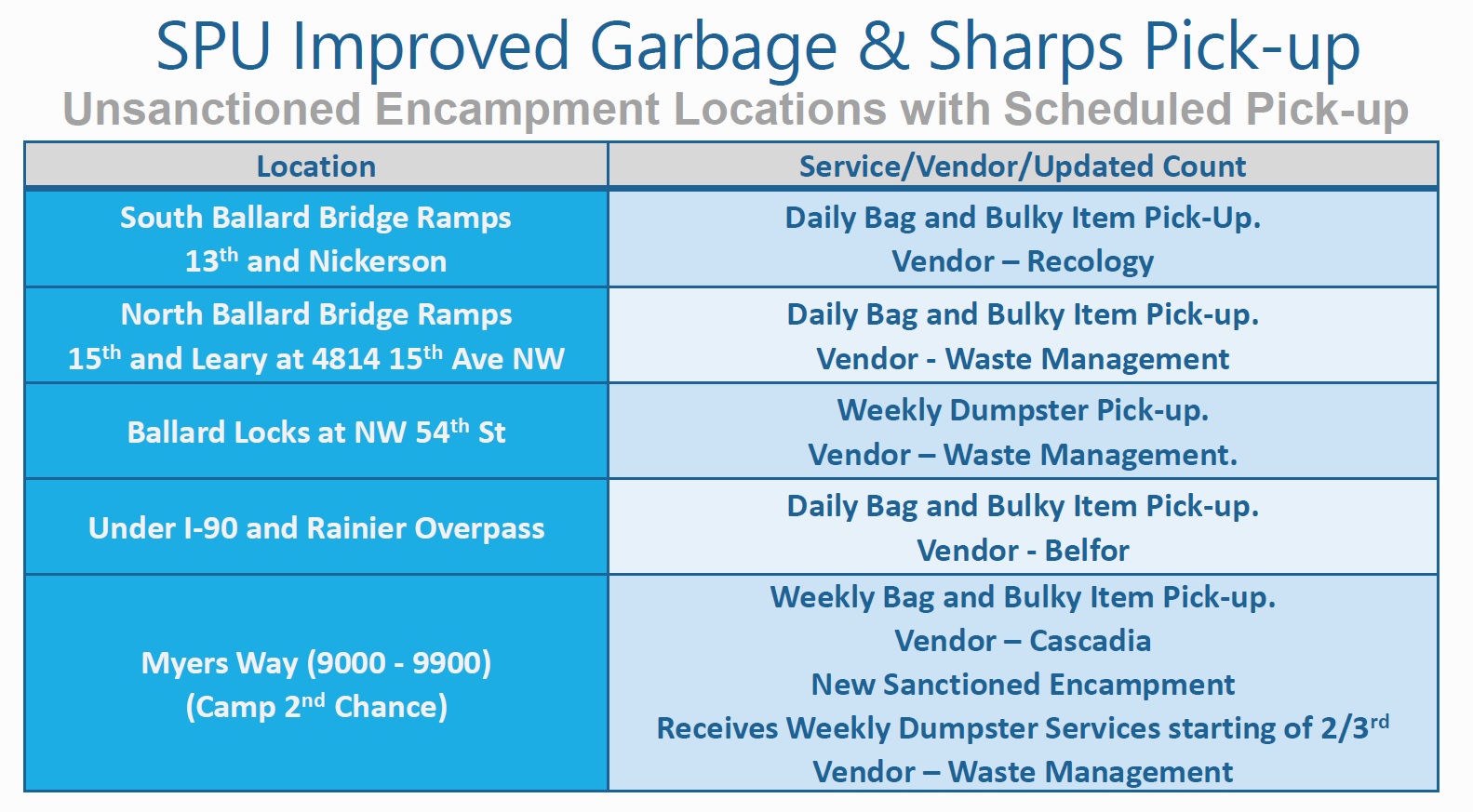 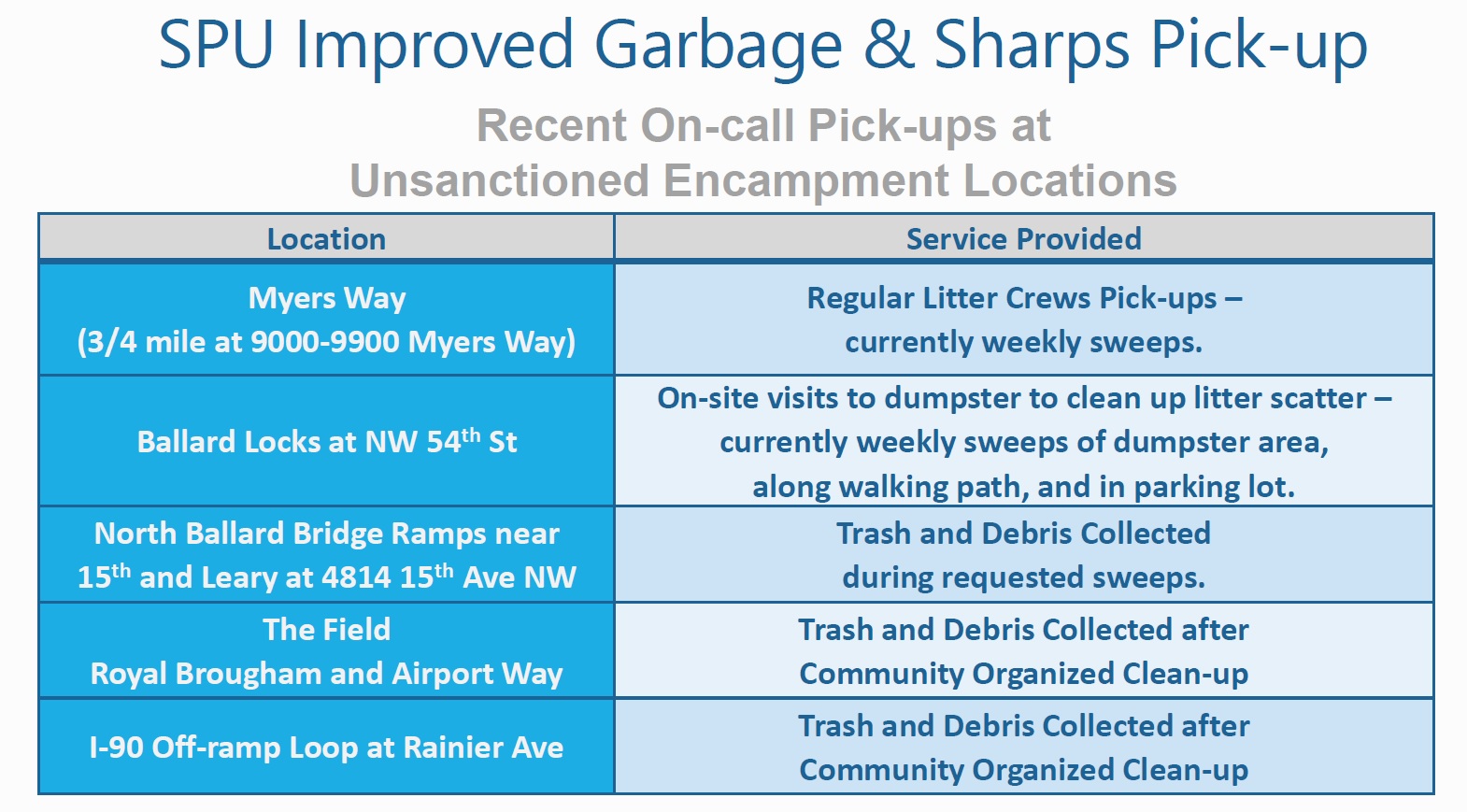 SPU’s litter abatement pilot project has also seen success. The first three sites were Little Saigon, the Chinatown/International District, and Ballard. As of February 1st, community partners have now taken over those three sites, and SPU is identifying three additional locations to add to the program. They expect to have locations identified by the end of April, with service running no later than the end of May.

SPU has also amped up its illegal dumping response as a way to handle trash left over when an unsanctioned encampment is abandoned. Requests are received through the Find it Fix it app, the city’s illegal dumping hotline (206-684-7587), and online. They promise response within 10 days, though in practice the results are better: the last week of January the average response time was 2 days. The city also claims that complaints are down by 15%.

The city’s new sharps collection boxes are getting brisk business, as is the hotline for requesting needle cleanup on public property.

The Parks Department’s program to make shower facilities available in community centers and swimming pools is also doing well. The city has also been distributing swim passes to unsheltered families to give them better all-day access to the shower facilities there.

The city is also in the midst of standing up its new “Navigation Team” for outreach, combining dedicated police officers and outreach staff to focus on solutions for the highest impact people and the most problematic locations. 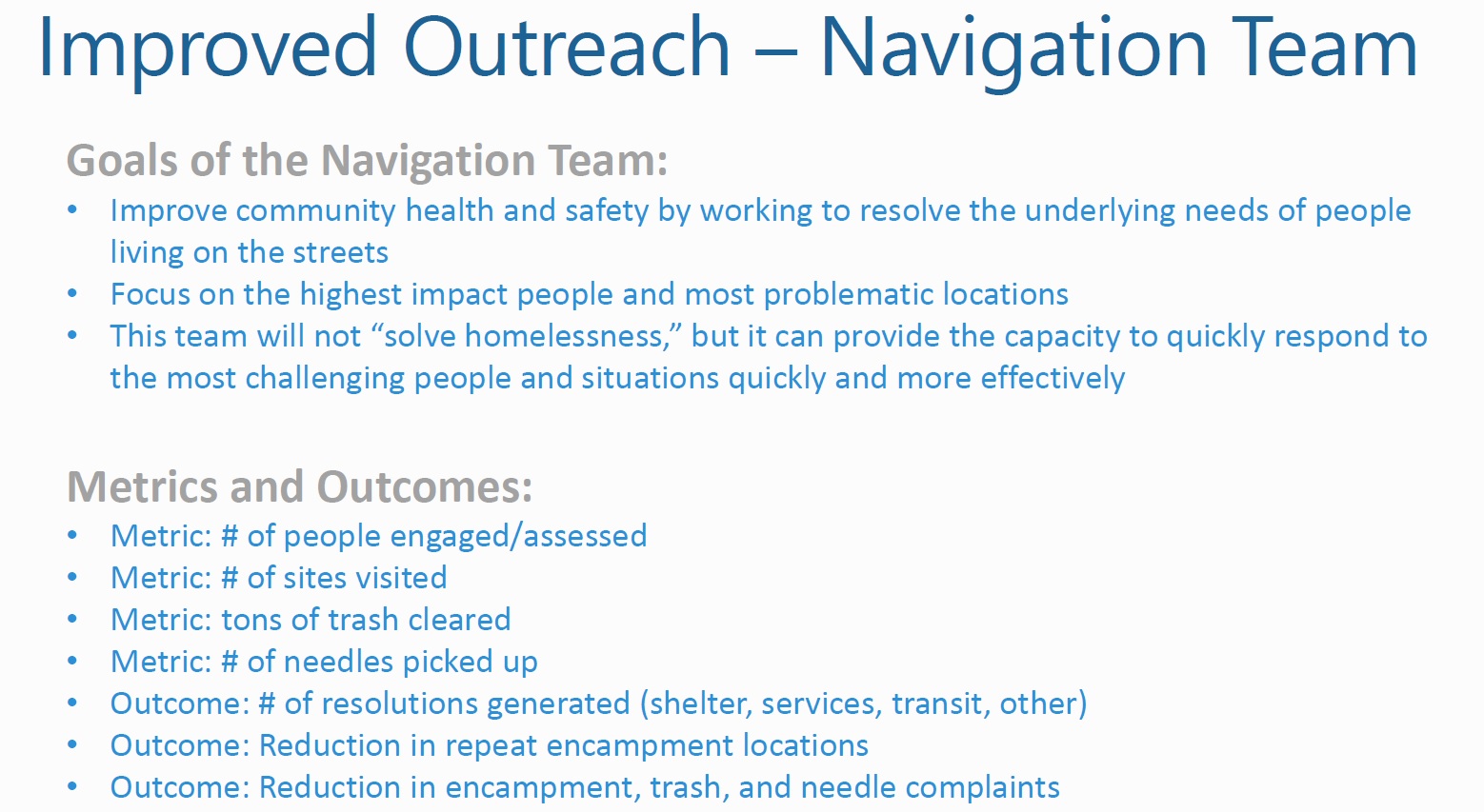 The police officers are all hand selected from those who voluntarily expressed interest in the assignment. This will be their full-time job and they will go through special training for it. The 8 contracted outreach workers will also be fully dedicated to the Navigation Team. The hope is that having the same people working on the team every day, and a well trained team that knows each other, knows the protocols, and knows what works will make a big difference in outcomes.

The Navigation Team can take care of Coordinated Entry enrollment and assessment, and can then refer individuals to services they need. This will also be the team that refers individuals and groups into the Navigation Center when it is up and running.

The Navigation team will have a flexible organization so that they can work in pairs or in larger groups from one day to the next depending upon the day’s assignments. 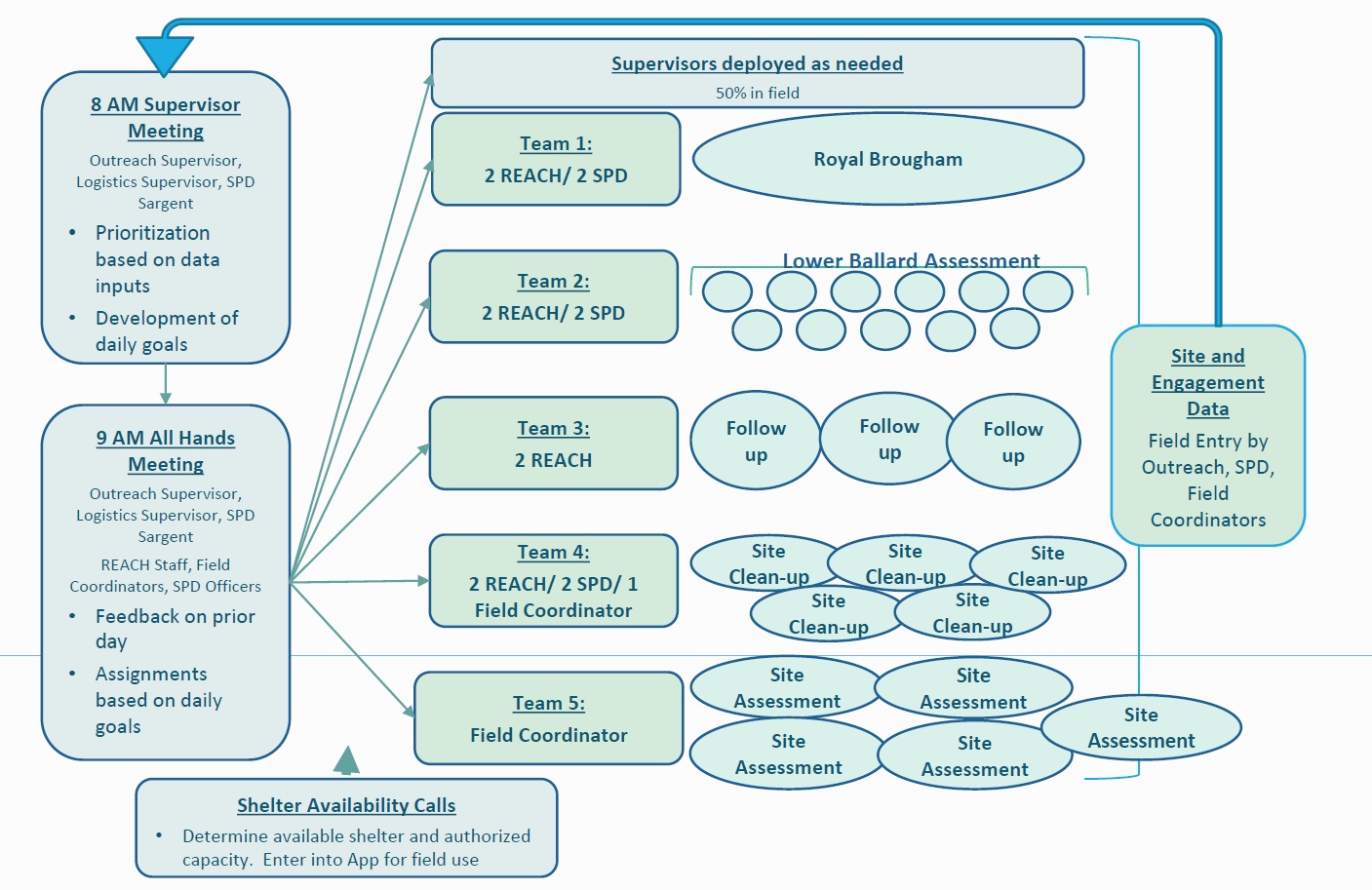 The Navigation Team is fully staffed; it is doing its initial team deployment right now, and expects to be fully up and running by the end of the month, with its own web site and dashboard.

It was announced last week that the Navigation Center finally has a location: the Pearl Warren Building, 606 12th Avenue South. The city will shortly begin the notification and outreach process with the neighboring community. It also must make several physical changes and upgrades to the space, including safety upgrades, expanding shower and bathing facilities, and improving spaces to allow for pets and personal belongings. The city doesn’t have a firm date for opening yet, but once construction begins it will announce one. 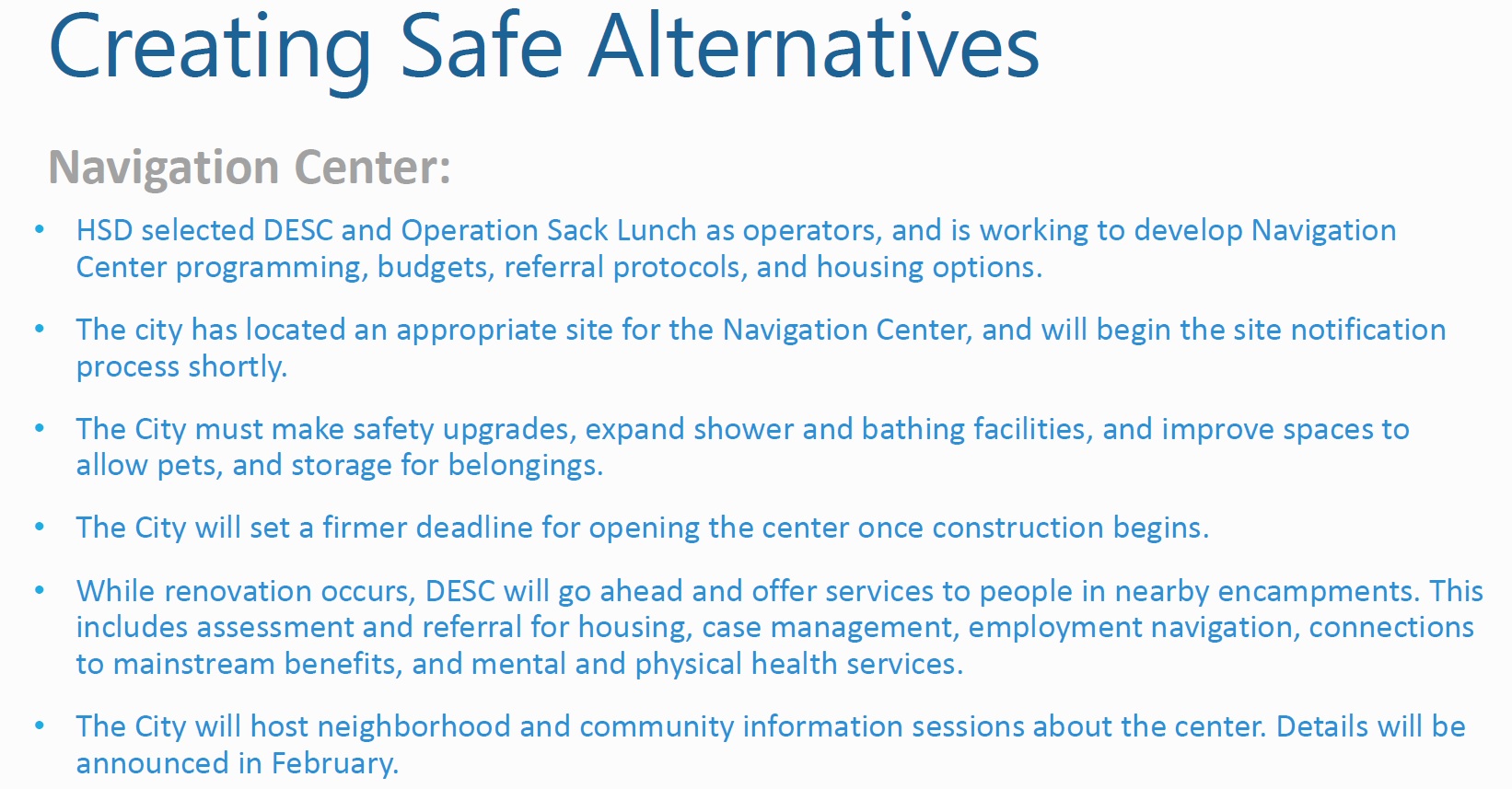 There was some discussion in the meeting about who the Navigation Center will serve. As part of the RFP, the city identified racial equity targets for three populations: African-American/black, multi-racial and Native American/Native Alaskan. It is not a “forever home” for the people it serves; the goal of the center is to move people through and into a stable situation within thirty days.

HSD is also standing up three new sanctioned encampments, with capacity to collectively serve 180-210 people.  Outreach to the communities is ongoing (though they report it is going fairly well), and they expect the sites to be up and running by the end of March. LIHI will operate two of the sites, and Patacara Community Services will operate the third. 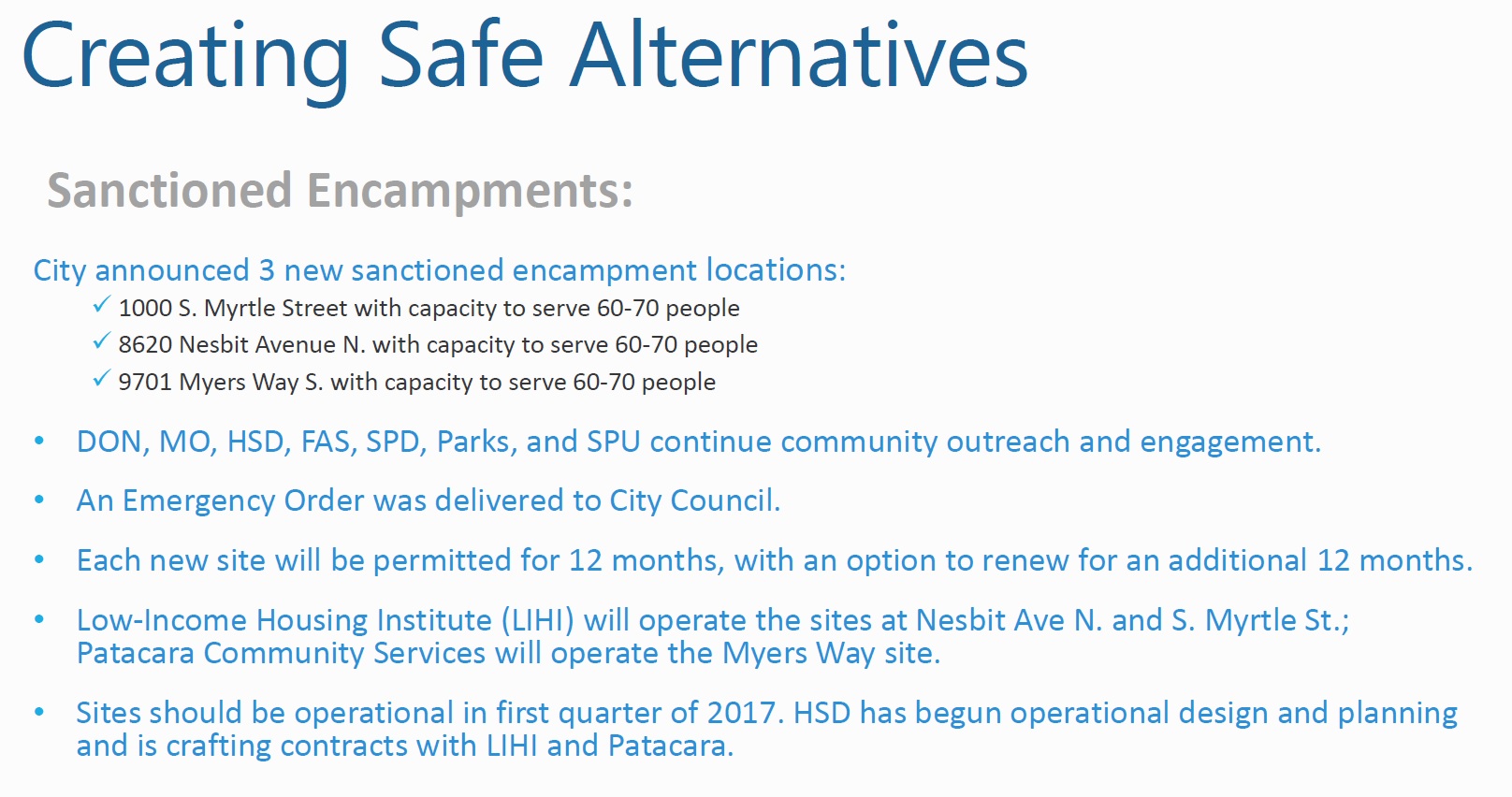 HSD has received seven proposals in response to its RFP for new 24/7 shelters, converting existing shelters to 24/7, and storage for personal belongings. They received proposals in each of those categories. Unfortunately, they did not receive any offers to donate space or additional funding for shelters from private, faith or businesses. They expect to announce awards totaling $1.3 million by March 1.

Finally, the city’s updated protocols for cleaning up unsanctioned homeless encampments are posted and open for public comment — the deadline is today, February 15th. Once they have reviewed and addressed the comments received, they will wait to enact them until they have fully trained the people who will be implementing them.

This was the most upbeat status update from the Bridging the Gap team to-date; they have many oars in the water, but they seem to finally be pushing things forward. None of this will solve homelessness — we need to wait for the Pathways Home plan to kick in later this year to start to see visible progress on that — but these are all good efforts that provide short-term benefits for our unsheltered neighbors while also making the city more livable for everyone. It helps that the team (with the exception of HSD) is now showing up with data to demonstrate the effort being expended and the impact that it’s having. Part of the reason HSD isn’t producing data is because the efforts it is leading on have been lagging: the sanctioned encampments, the Navigation Center, its RFP, and the outreach part of the Navigation Team. Let’s hope as those efforts get traction HSD decides to follow SPU’s example and be transparent about what it’s doing. That would certainly be a refreshing change for a large department with a history of opaqueness.