Last Friday the City Council’s Gender Equity, Safe Communities and New Americans Committee met again to continue its deliberations on the proposed police accountability legislation. They considered amendments related to work plans, reporting, evaluations and budget. Threading through all of that was a recurring theme of “independence” and freedom from political pressure. But that wasn’t really what they were talking about.

Buried (or perhaps concealed) in that discussion was the real question the Council members were grappling with: how much power to give the Community Police Commission (CPC). And it was clear that there are two factions on the Council with very different answers to that question.

Let’s do a quick review on the accountability structure proposed in the legislation. There are three bodies involved: 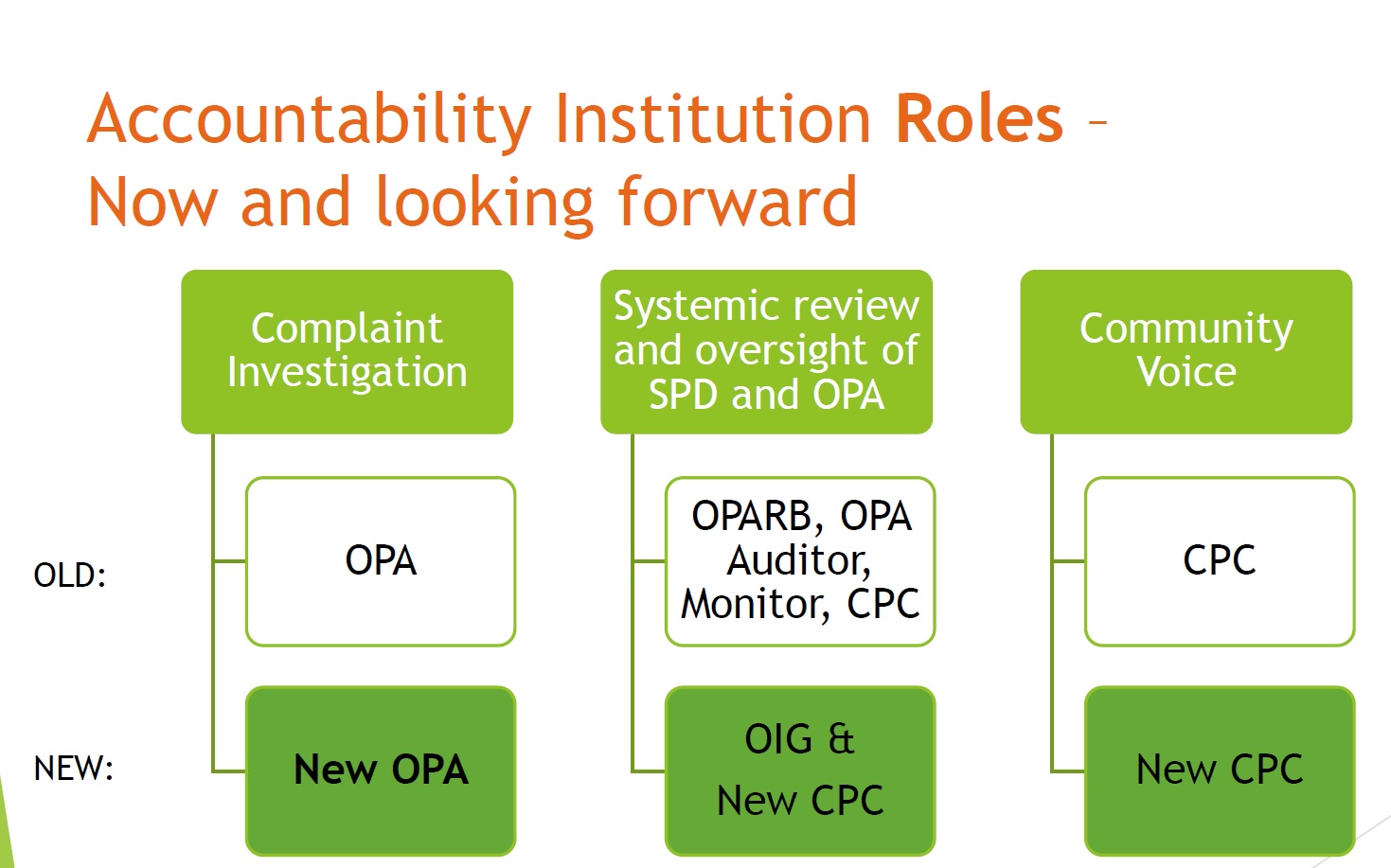 While there is some overlap of responsibilities (OPA and OIG both have investigative capacity; OIG and CPC both review and recommend changes to systemic issues), all three groups have different roles in the overall police accountability system.  OPA and OIG have “hard power” in that they both have authority that affects the outcome of misconduct investigations. CPC has substantial “soft power” in that it speaks authoritatively for the citizens of Seattle; this is important in the context of the consent decree driving police reform that largely stemmed from SPD’s lack of credibility with the citizens it was supposed to serve. OPA and OIG staff are salaried employees; CPC commissioners are volunteers (adding to the authenticity of their “soft power”).

Several of the Council members, and notably committee chair Gonzalez and Council member Burgess, have stressed the importance of designing the structure as a “three legged stool,” with care taken that the three legs are all the same height in terms of their power and the same strength in terms of their independence — both from each other and from outside political pressure. Their views on this have been shaped by their study mission trips to New York, New Orleans and Los Angeles to understand the successes and failures of those cities’ police reform efforts. They came away with strong impressions about the hazards of creating hierarchies within the accountability system, particularly in terms of the political pressures a hierarchy asserts on individuals within the structure.

The political pressure takes many forms. In part, it’s represented in the organizational chart: who hires and fires department heads, who can direct them to take on specific work items, and who writes their performance reviews. There is also politics in the budget decisions, as whoever holds the purse strings can choose to reward or punish a department, or starve a group of resources to limit its ability to do its job. The Council members grappled with the budget question last month, opting to give the heads of the OPA, OIG and CPC the freedom to bypass the Mayor and lobby the City Council directly for their department’s budget needs.

Last Friday, these issues came to a head around two specific questions:

Among the Council members, there were two camps on the answers to these questions. O’Brien and Herbold argued that the CPC should write the performance reviews, and that it should have the authority to add items to the OIG work plan. Their given reasons were straightforward: the CPC would serve as an objective outside third party evaluating the performance of the two department heads; and since the CPC doesn’t have its own investigative capacity, the ability to add items to the OIG work plan grants it assurances that investigations it believes are important will get attention.

Gonzalez and Burgess objected to that approach, however, arguing that it goes against the spirit of their efforts to establish independence of each of the three groups and to prevent political pressure from coloring their cross-group interactions or making any of the groups “beholden” to any other. They also pointed out that both of these changes would create a de facto hierarchy among the three groups, with the CPC on top since it would be telling the OIG what work to do and reviewing the performance of OPA and OIG heads. Council members Juarez, Johnson and Bagshaw agreed with Gonzalez and Burgess  (Sawant and Harrell were not present for the discussion).

Both sides make fair points, but the notion of the three-legged stool with strong, independent legs is a bit disingenuous since there is already a partial hierarchy within the three groups: OIG reviews and certifies OPA investigations before they are submitted, and has the authority to direct OPA to conduct additional investigation on a case. That is a nontrivial amount of power wielded over OPA. And that points to what’s really going on here: a debate over how much “hard power” to give to the CPC over SPD, OPA and OIG. 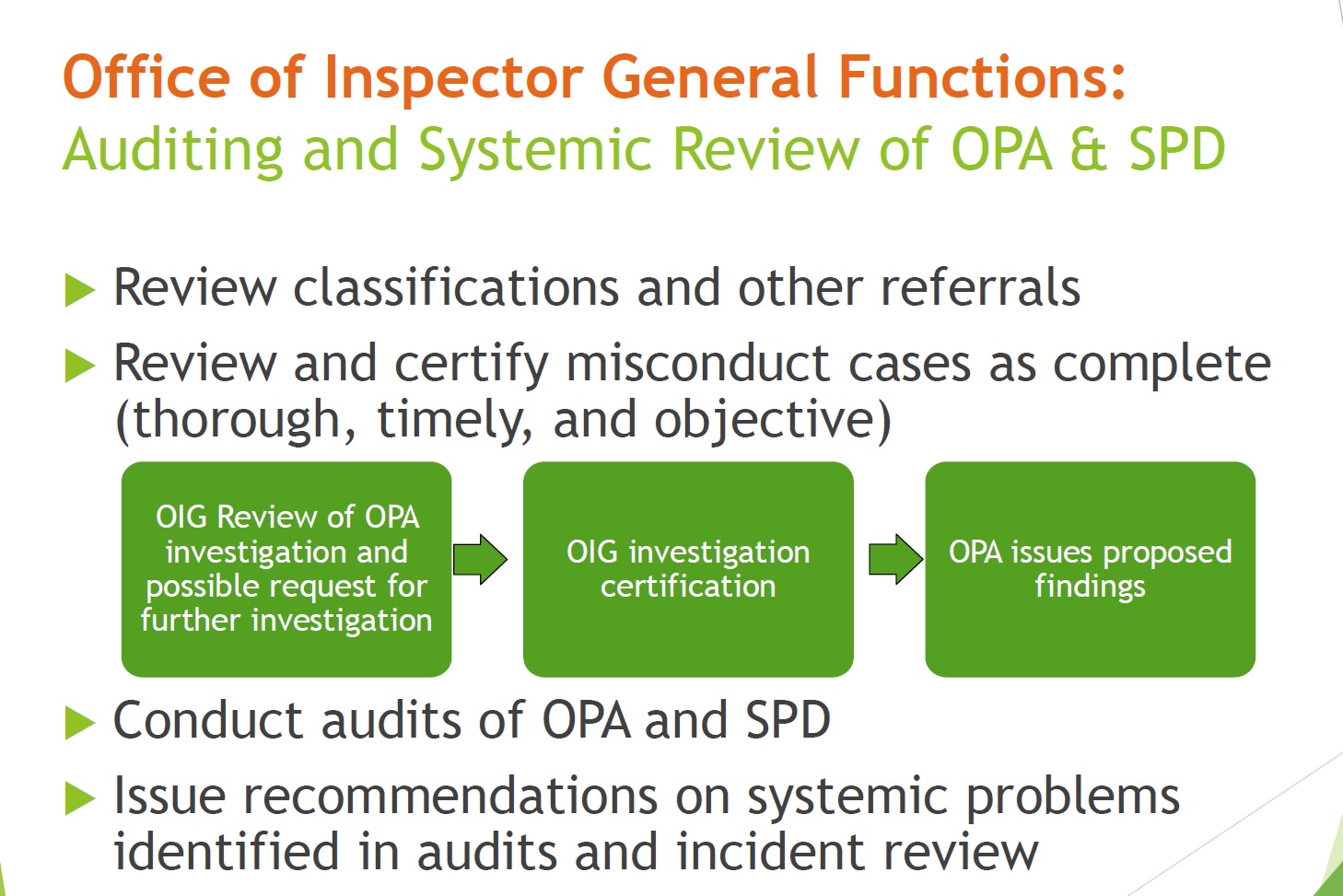 O’Brien and Herbold argued that they want to ensure CPC has “a meaningful role beyond giving input.” Herbold also observed that oversight isn’t simply comprised of investigations, and questioned whether a structure that limited the CPC to providing input truly established civilian oversight to the police department. “The spirit of this request,” she said, “is coming from a long history of people in positions of power not addressing issues raised by the public.” For his part, O’Brien noted that the three groups are not identical in either role or capabilities, so there is a need for CPC to be able to assert influence, at some level, on the other two groups to assure public transparency and to do work that it can’t do itself. 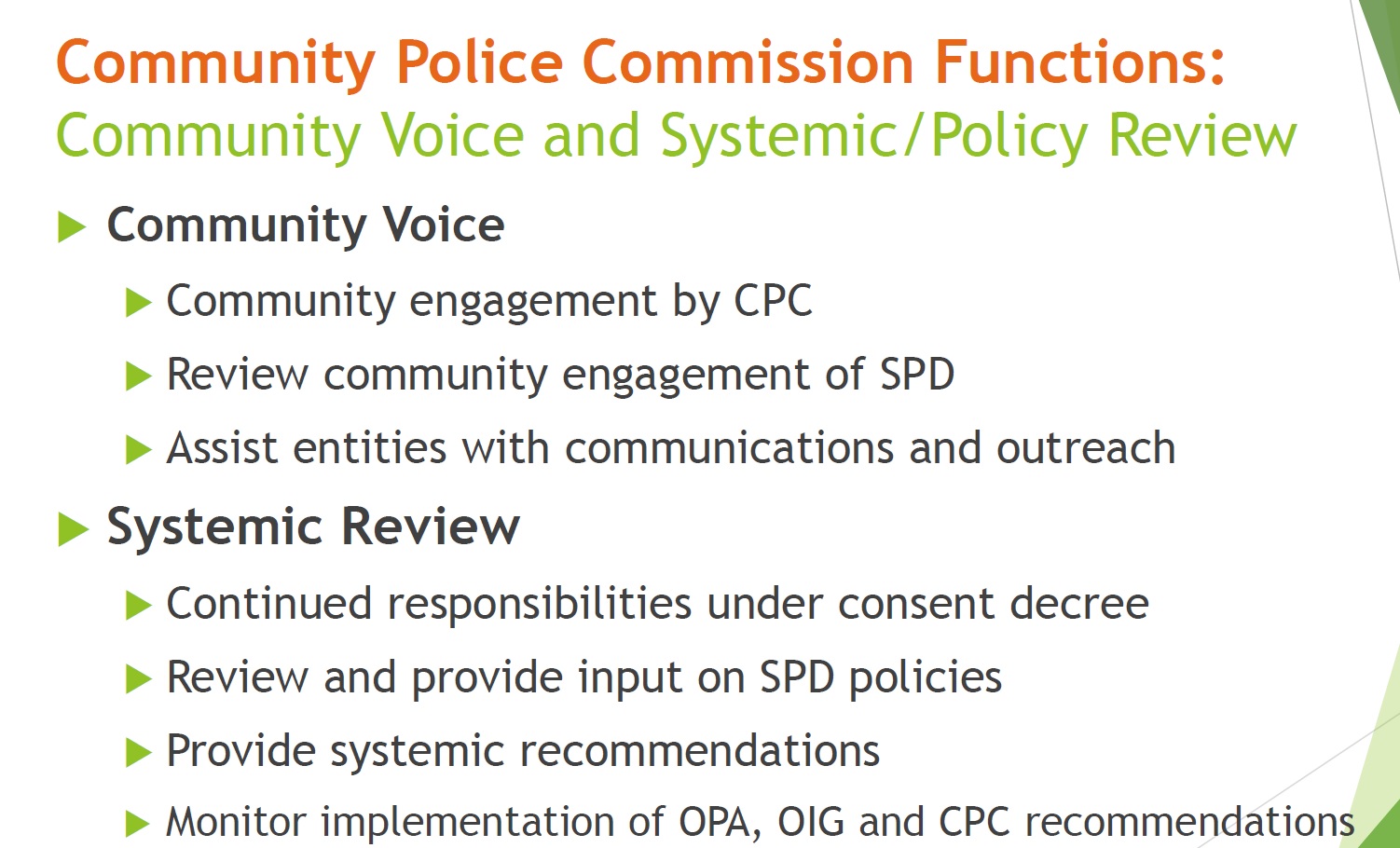 It’s interesting that the conversation on police accountability has abstracted up a level to ask “who watches the watchers?” There will be three bodies looking over SPD’s shoulder and keeping it accountable, but where does the accountability flow from there? Up to the Mayor and City Council with input and guidance from the CPC, or more directly to the citizens through an empowered and directive CPC?

Strengthening the role of the CPC is a very appealing answer, and one that the current CPC has itself asked for (it explicitly has requested to write the performance reviews for the OPA Director and Inspector General). But Gonzalez and Burgess are no doubt influenced by what they saw in Los Angeles, where its counterpart to the CPC wields strong power (it even appoints the Chief of Police) but is widely seen as coopted by political forces and has lost the faith of the citizens. In response, the two Council members have gone down a different path, empowering the CPC to direct recommendations at SPG, OPA and OIG and requiring a response to CPC recommendations within 30 days. Burgess also successfully introduced an amendment on Friday that gives the CPC the control over the “master list” of recommendations  coming from OPA, OIG and CPC with the authority to annotate the list with its own analysis. The CPC can’t force SPD, OPA or OIG to take action, but CPC controls the conversation and has power to publicly call attention to where it believes those groups are failing in their missions.  That authority, combined with its credibility with Seattle’s citizens, could be a powerful combination. That’s what Gonzalez and Burgess are hoping for, as an alternative to giving the CPC more direct authority.

There’s no perfect answer here. A strong CPC can more easily push for change but inevitably becomes part of the system and another political actor. A weaker CPC has street cred and a more respected, independent voice, but will need to use the power of public conversation to drive reforms.

On Friday, the bloc of five Council members arguing for a “soft power” CPC  (Gonzalez, Burgess, Juarez, Johnson and Bagshaw) carried the day. When the bill comes in front of the full Council, Sawant, who has a deep distrust in SPD and full faith in grassroots movements, will likely side with Herbold and O’Brien. It’s unclear where Harrell, who champions civil rights issues, will land on these questions. But it’s also unclear whether any of the minority-bloc Council members feel strongly enough about the circumscribed role being carved out for the CPC that they would vote against the final legislation. On Friday, neither Herbold nor O’Brien expressed such strong reservations. But the current CPC continues to play a significant role in shaping the bill, and at the end of the day if they are unhappy enough with the final result that they choose to oppose it, these issues may get revisited. That may indeed be the first test of the CPC’s “soft power.”

The deliberations on the police accountability legislation continue on May 18th, with discussion of discipline procedures and investigation processes.  You can watch last Friday’s meeting here.