Shortly after 5:00pm this evening, Bruce Harrell took the oath of office as Seattle’s 54th Mayor. He was flanked by City Council members, city department heads, and his family and friends. 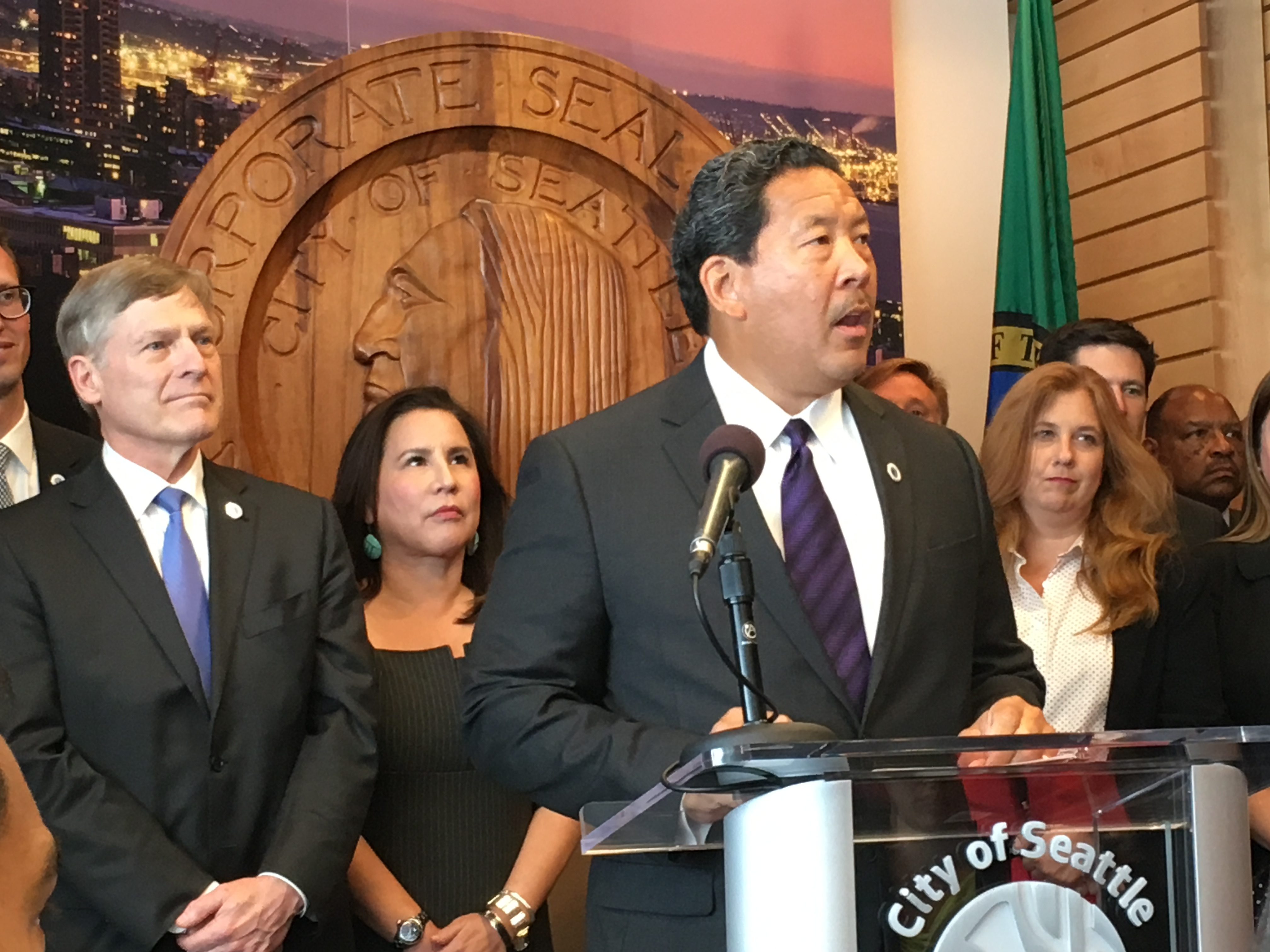 In his remarks before taking office, he said that he planned to decide by 5:00pm Friday whether to accept the Mayor’s job until November 29th when the newly-elected Mayor — either Jenny Durkan or Cary Moon — will be sworn in. If he does accept the position, he will forfeit his seat on the City Council for the remainder of his term (through the end of 2019) and will be unemployed come December.

If he declines, then the Council will need to vote to appoint another Council member to take his place. Harrell has asked his fellow Council members to be prepared to vote on Monday, so as to minimize the amount of time that the city is without a Mayor. Technically they have twenty days to fill the position.

Harrell made it clear that he does not see the job as “caretaking,” since there are many critical issues the city is wrestling with.  He said that his highest priority will be the 2018 budget, which is scheduled to be presented to the Council on September 25th.

Since a newly-elected Mayor will now take office on an accelerated schedule (November instead of January), Harrell’s first act as mayor was to sign an executive order directing FAS Director Fred Podesta to begin building a transition plan that either Moon or Durkan can adopt once the election results are known.

You can watch Harrell’s speech and oath of office here. He also sent out a letter to the community after the ceremony:

Today I was sworn in as the 54th Mayor of Seattle, which was caused by the resignation of Mayor Ed Murray. The duties of public servants are not only more important than ever, but they transcend any particular person or office. They indeed extend to every person of Seattle.

Within the next few days I will announce whether I intend to remain Mayor or whether I will ask the City Council to elect another City Councilmember to serve until a new mayor is elected. I have set a personal deadline of Friday at 5:00pm to announce that decision.

To the residents of Seattle, let’s embrace the best in ourselves. To those who are hurting, let’s heal together. We have a lot of work to do and we can only succeed if we work together as a team.

As an aside, there were three people notably absent from today’s event: Council members O’Brien and Sawant, and former Mayor Ed Murray who effectively disappeared as soon as he submitted his resignation.

By the end of the day on Monday, we should have some answers about who will be Mayor through the end of November. Stay tuned.