Yesterday the Seattle Police Department issued their second annual Use of Force Report, a compilation of data on how and when SPD officers used various levels of force on suspects during 2017.

SPD categorizes its use of force into four types (or levels — SPD uses them interchangeably):

Type III use of force is also subdivided into “officer involved shooting” (OIS) and other types of severe force.

Let’s start with the overall trend: use of force is nearly the same as  2016, with a small but noticeable shift to less severity. The level 3 numbers are so small that it’s impossible to draw any conclusions about trends; the year-to-year fluctuations caused by even one or two incidents over the course of an entire year is enough to skew the numbers. Remember, we’re talking 20 uses of Level 3 force among 398,459 events. 20 is still 20 more than we’d ideally like to see, and I’m not justifying 20 as the “right” number; I’m just saying that we shouldn’t look for a year-to-year trend in numbers that small and noisy.

Level 2 use of force seems to be continuing a multi-year downward trend, which is good news.

For some reason, SPD decided to throw in a really stupid and misleading graph of this data, broken out by month: 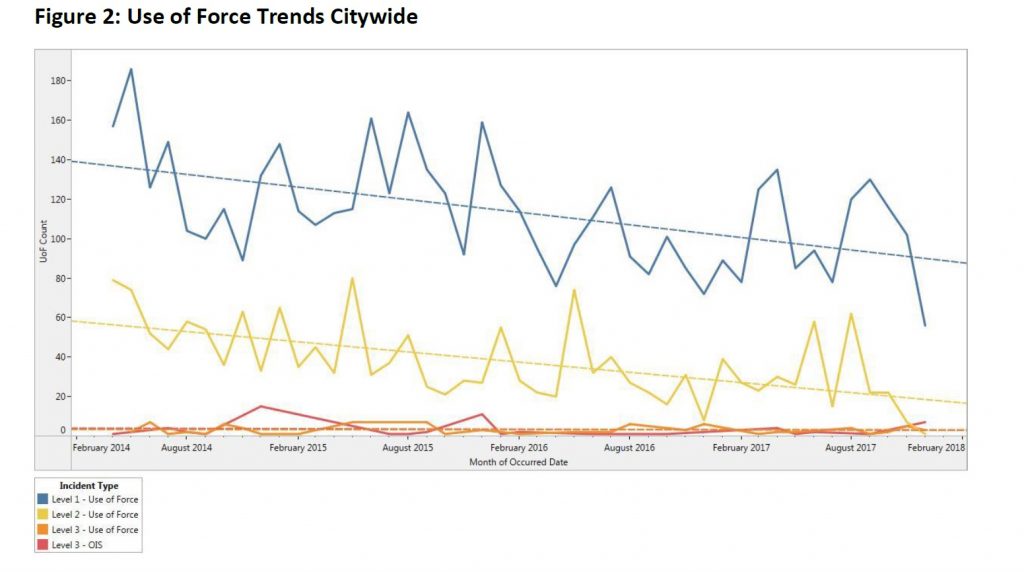 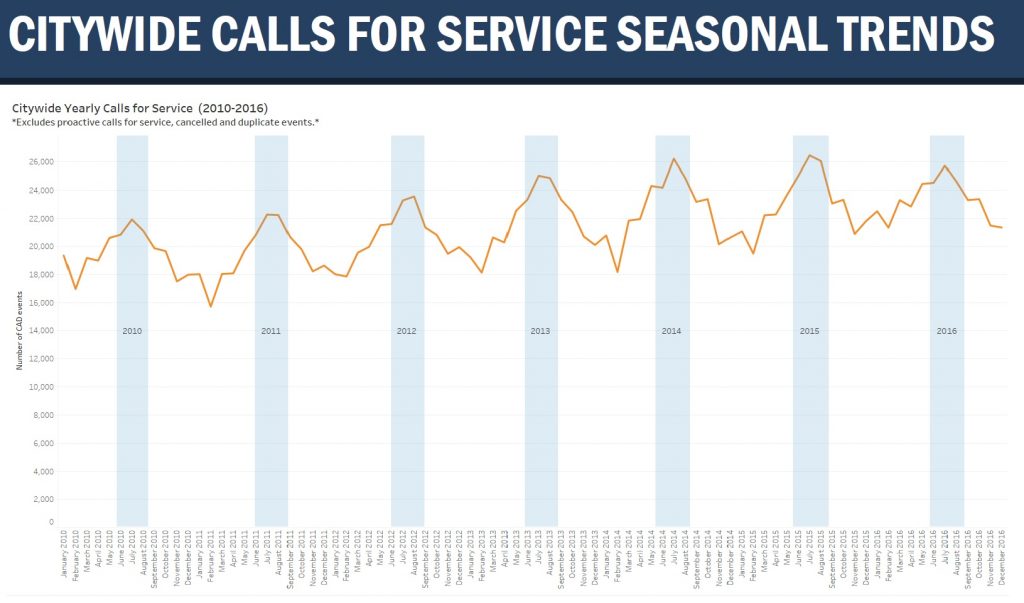 It also senseless to fit data to a linear trend line when we know darn well that the numbers will never go to zero; there is some unknown baseline amount of incidents that SPD will use some level of force every year, and it’s far more likely that the trend will asymptotically approach the baseline. So if there’s a trend, it’s going to be a curved line.

OK, back to the data.  It’s no surprise that almost 90% of the use of force was by patrol officers. The Compliance and Professional Standards Bureau oversees field training, which largely happens on patrols.

Next, demographics of the people that SPD used force on. About 80% of subjects were male. Blacks continue to be overrepresented, slightly more so among men than women, and whites continue to be underrepresented, also slightly more so among men than women.  It’s worth pointing out, though, that these individual stats aren’t the whole story and more analysis should be done on this — including comparing these demographics to the demographics of all SPD arrests to see if they are using force more or less on certain populations during arrests. That said, the numbers continue to be worrisome. 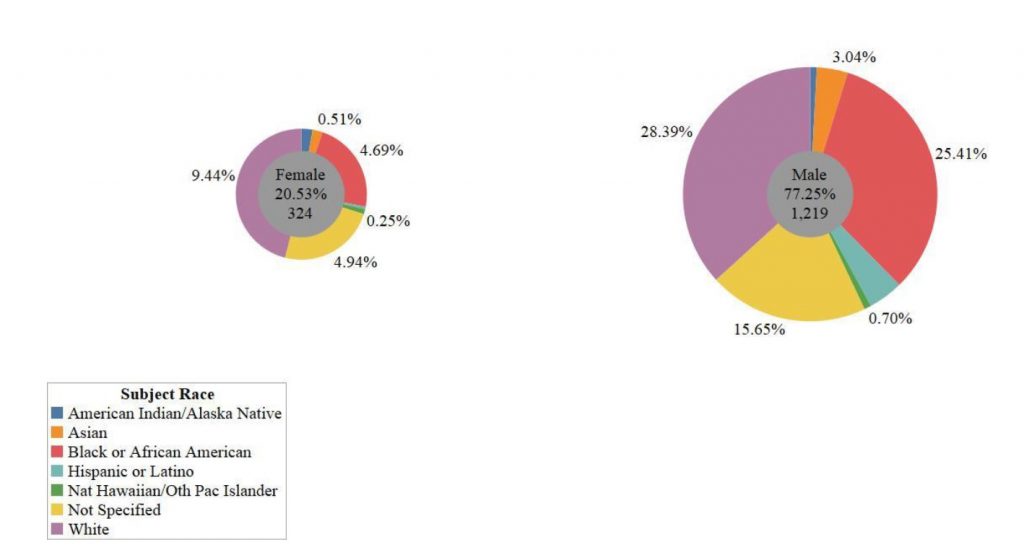 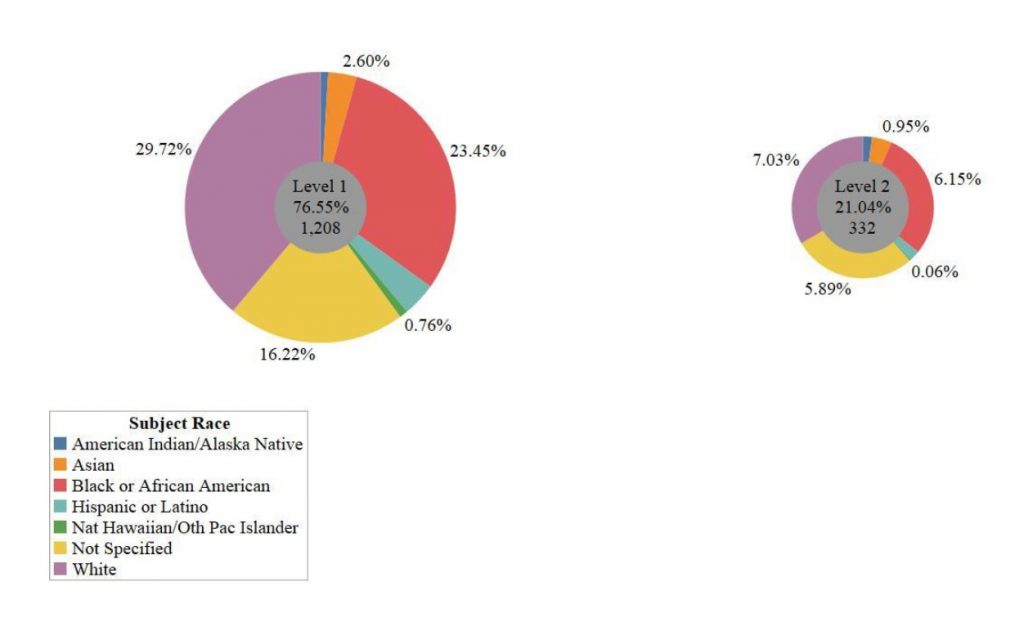 The Level 3 use-of-force demographics are very small numbers, but just for the record, of the 18 subjects thee were:

And of the 8 officer-involved shootings, they involved:

Here’s a list of types of calls in which incidents of use-of-force happened. In retrospect, it’s not surprising that a large percentage are assaults. 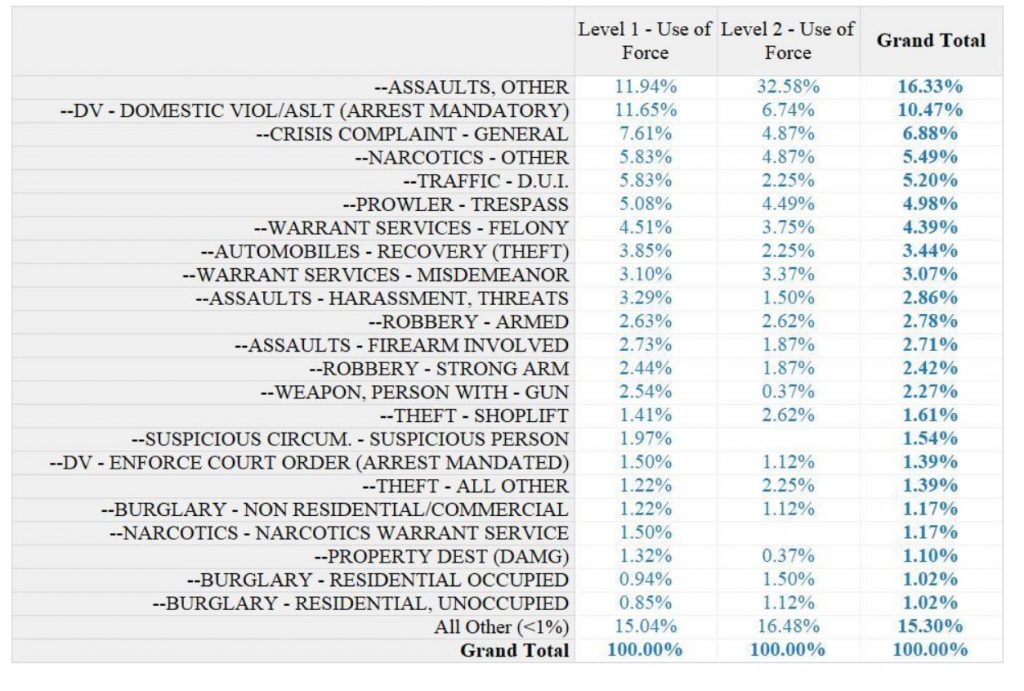 The report also includes data on incidents by day-of-week and time-of-day. Apparently Tuesdays are a good day to stay home. And (again, not surprisingly) late night is the peak time for use of force. 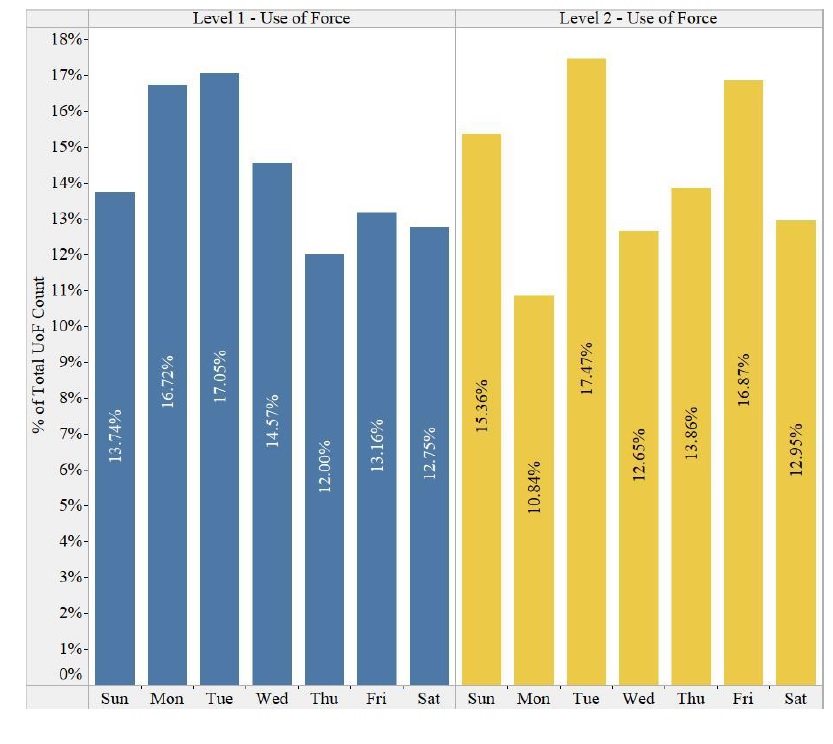 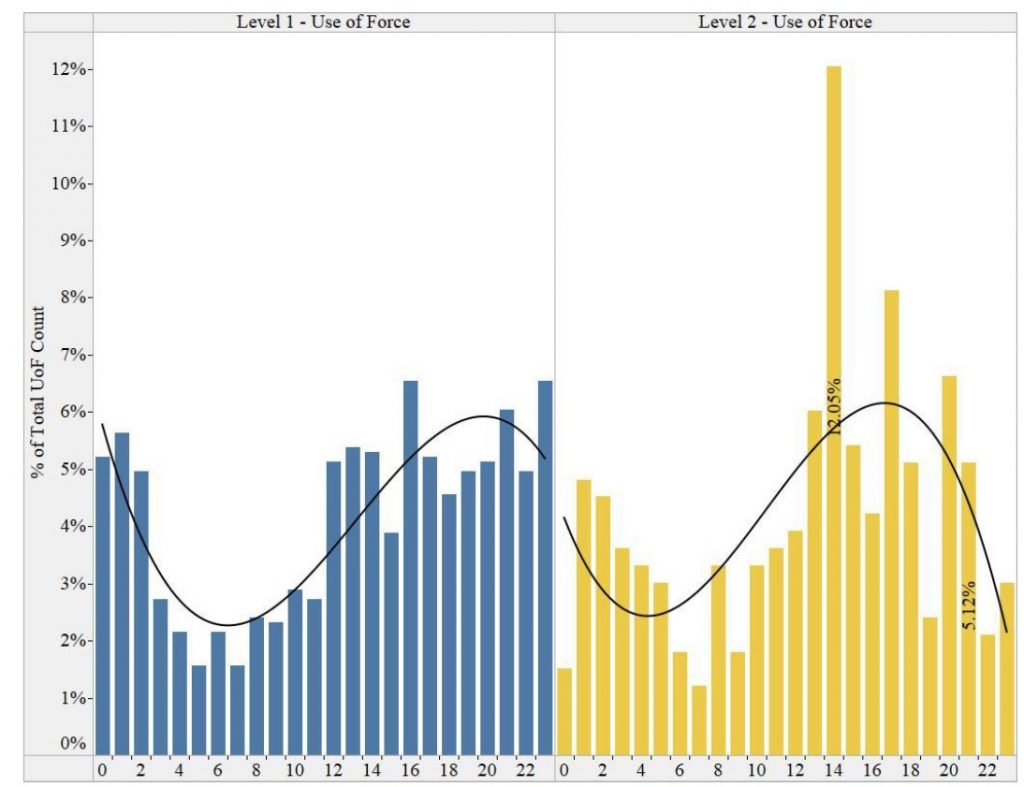 The geography data is very interesting. Of the five police precincts, three saw decreases in use of force (South, Southwest, and East), and two saw dramatic increases (North and West). Nearly 57.2% of use-of-force incidents occurred in the North and West precincts, 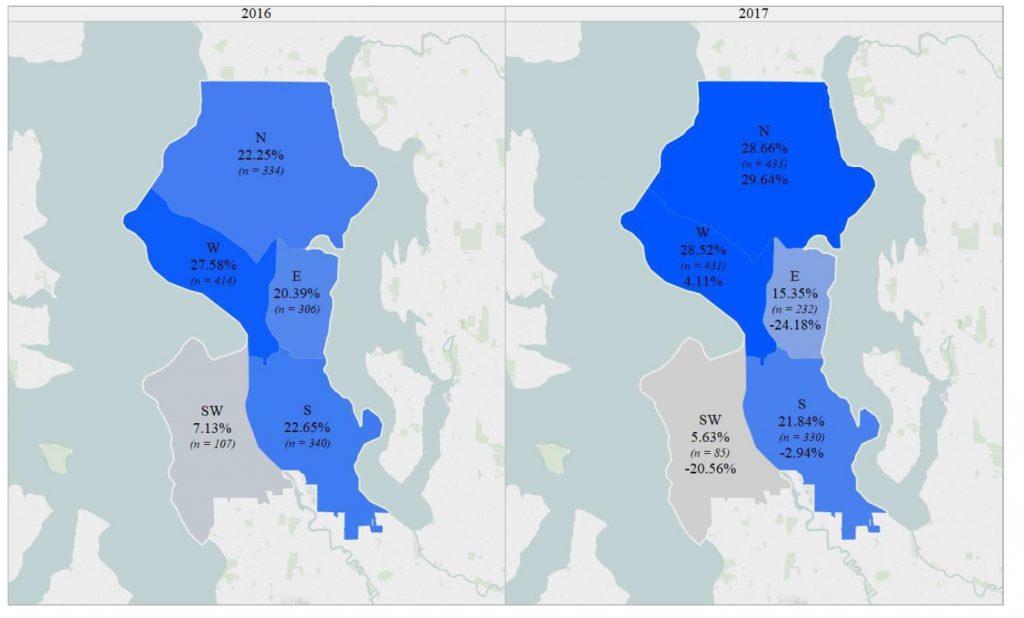 Within the North Precinct, one specific sector, including Wallingford, Fremont and Ballard, saw its incidents increase 92%. 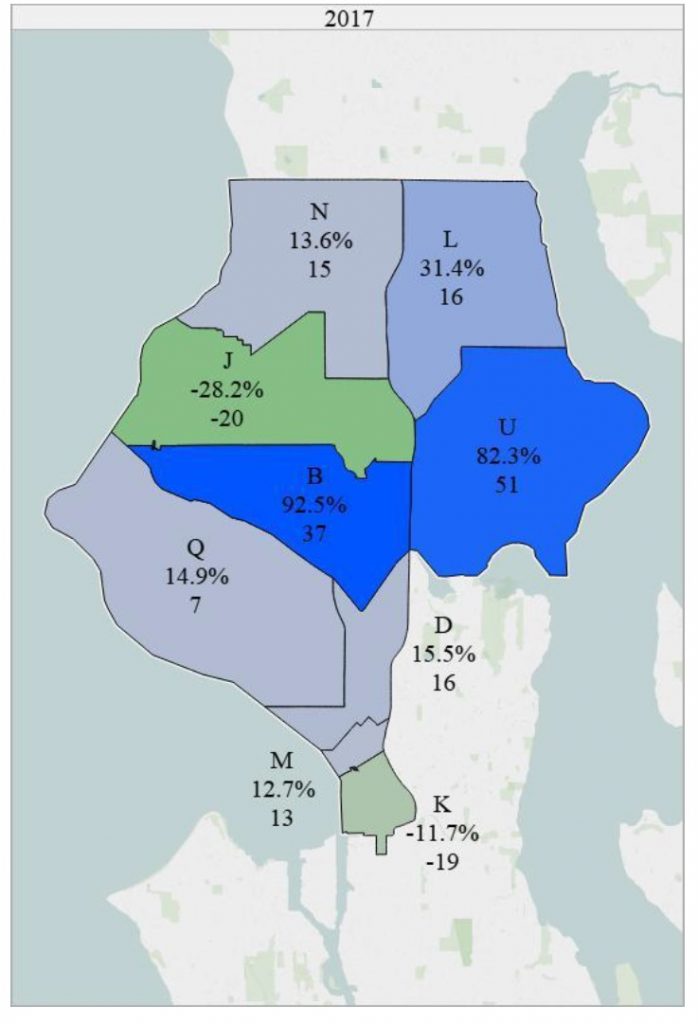 There is an in-depth analysis of taser use in the report, particularly relevant given the controversy over whether one of the officers in the Charleena Lyles shooting should have been carrying his department-issued taser.

There were 27 incidents in which officers deployed tasers last year, with 54 individual taser activations. The report says that most involved one or two activations, though one incident involved a single officer activating his taser six times; four the time times the taser malfunctioned and didn’t deploy; in the other two the taser did deploy but not sufficiently to subdue the subject.

A taser has multiple modes of deployment, depending on the distance from the target. If within reach, it can be used in “drive/stun” or “contact” mode in which it is held against the person’s body. At a distance, it is used in “probe” mode, in which two darts are shot into the person’s body and the electric charge is sent through them. In between, it can be used in a combination mode, with the probes first and then direct contact. In any of the modes, it can be used repeatedly because a single charge often isn’t enough to subdue a suspect; that’s called a “re-energize.”. 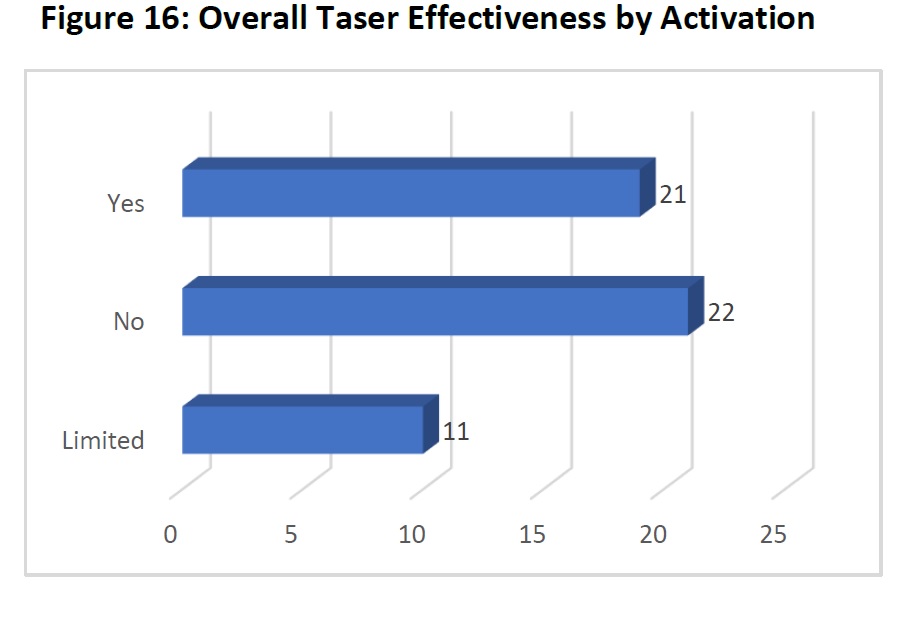 It’s particularly ineffective in “probe” mode. Here’s a graph of the different ways tasers were deployed last year, and how well they did.

When you look at it by distance, it looks like a distance of 6-10 feet is optimal, but generally they are unreliable — and particularly at distances of over 10 feet.

SPD tracks officers’ explanations for why the taser didn’t work. Clothing was the reason 58% of the time, and the report calls out “heavy or baggy clothing” as a frequent cause of taser ineffectiveness. 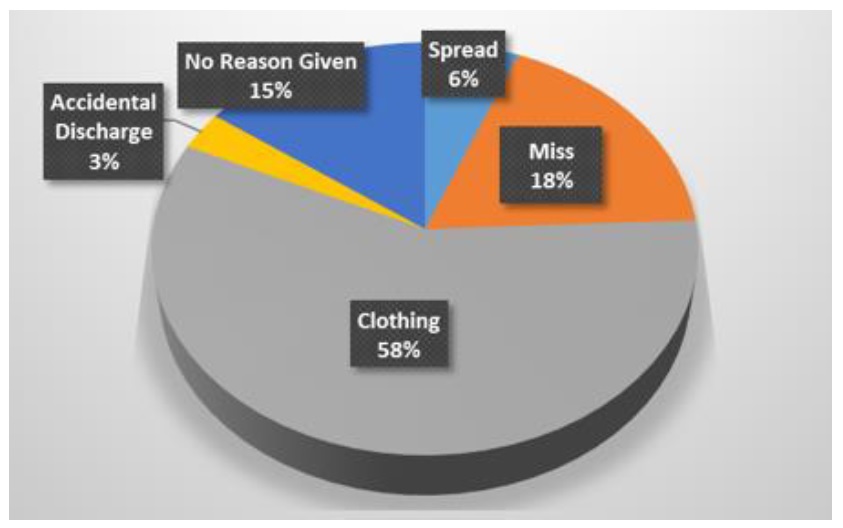 As an aside: according to the Force Investigation Team report on the shooting of Charleena Lyles, she was three feet away from Officer Anderson (the one who was supposed to by carrying a taser) and wearing a puffy winter coat when she threatened him with a knife.  The statistics above suggest that if Anderson did have a taser, there’s a very good chance it wouldn’t have been effective. That of course is not an excuse for his violation of SPD rules in not carrying it, but it decreases the likelihood that it would have changed the outcome of the tragic incident.

Both the FRB and FRU use the same process to review cases. In total, they reviewed the actions of 487 officers involved in 185 use-of-force incidents last year. The FRU approved of the officer’s conduct 100% of the time — but keep in mind that it only handles less severe and uncontroversial cases, so this isn’t that surprising. The FRB disapproved of three officers’ actions, and deferred 95 cases that had already been referred to the Office of Professional Accountability.

The numbers are similar for their reviews of tactics and decision-making.

They are also similar for their review of supervisors’ on-scene supervision when they were present before the use-of-force occurred.

They were more critical of the reviews of the timeliness and thoroughness of Force Investigation Team and chain-of-command investigations.

Here are my take-aways from the report: