We talk about companies in funny ways. Sometimes we anthropomorphize them, as many have with Amazon over the past couple of days while discussing the company’s decision to pause construction of its new office tower or whether it can afford to pay an additional $20 million a year in taxes. Company executives, on the other hand, will often justify decisions as necessary to fulfill their fiduciary responsibility to “the shareholders,” i.e. the often faceless owners of the company’s stock who vote for the board of directors, and by proxy control who is running the company and making key decisions.

Given our current collective concern over Amazon’s outsized presence in Seattle, it’s worth asking: who are Amazon’s shareholders?

We find pieces of the answer to this question in several places. For a high-level view, MSN Money is a good place to start. It tells us that there are just over 425 million shares of Amazon common stock in circulation, and it offers some statistics and details on who owns them.

It says that 17% of the stock is owned by “insiders” (executives and board members who have knowledge about the company unavailable to the public that would affect the stock price) and people or institutions who own more than 5% of the company’s stock. Amazon’s annual proxy filing with the SEC tells us who those people are (as of mid-February, so the percentages don’t match the stats above):

Jeff Bezos owns 16.3% of Amazon; he is the largest shareholder by far, but it’s still a small fraction. Two investment institutions, Vanguard and BlackRock, each have around 5%. The other directors and senior executives have small amounts that collectively don’t add up to much.

Over 60% of the company’s shares are under the control of investment institutions that sell mutual funds and ETFs and manage investment portfolios for a variety of organizations (pension funds, university endowments, college savings programs, etc.) and wealthy individuals. The investment institutions aggregate the funds deposited with them, buy stocks such as Amazon’s, and exercise the shareholder voting rights on behalf of their depositors — which can give them a lot of power if they own a significant fraction of a company’s shares. The top 15 institutions (in terms of Amazon holdings) control 29% of the common stock. Beyond the top 15, the fractions of Amazon stock get pretty small, so there is a “long tail” of institutions with small holdings. 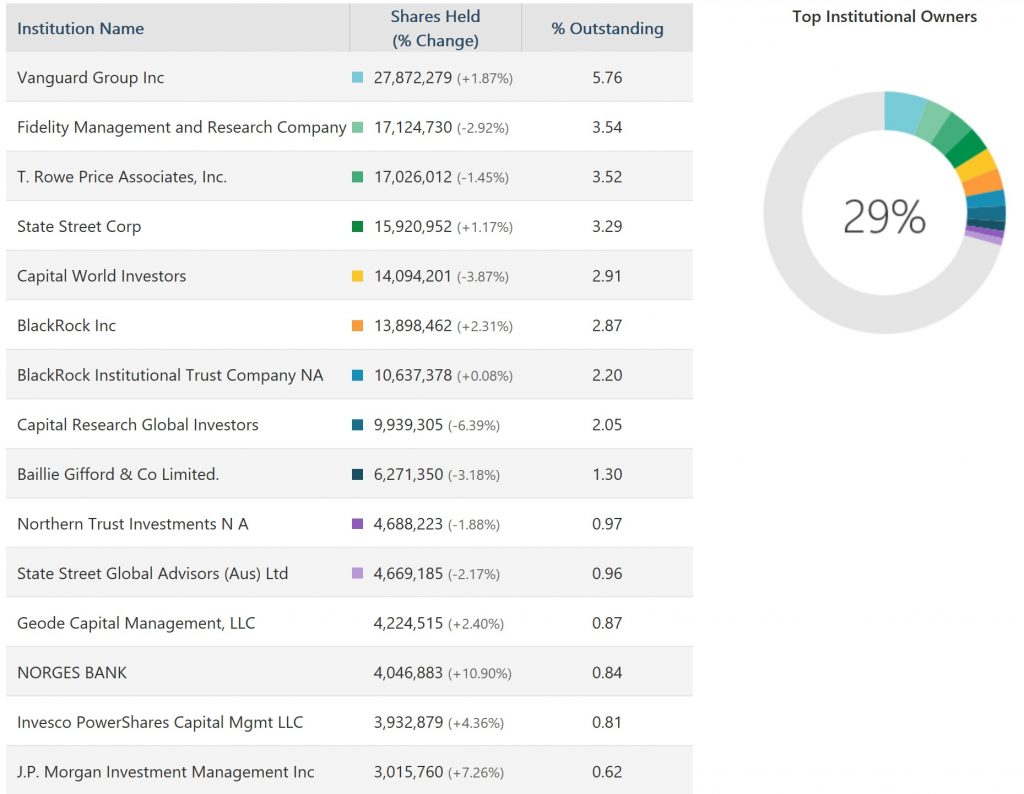 About a third of Amazon stock is held by mutual funds and exchange-traded funds (ETFs) — most of which are offered and managed by investment institutions accounted for above. It is an interesting list though; here are the top 15. Again, relatively small fractions. 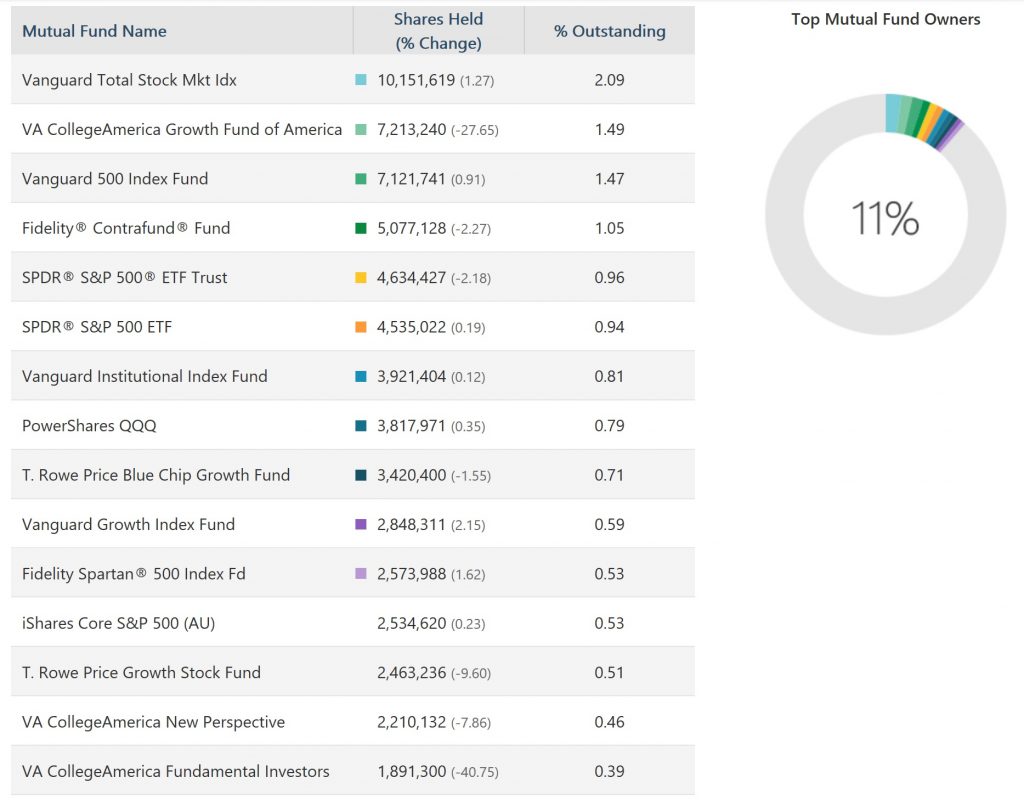 This site tracks 227 ETFs and mutual funds that hold Amazon shares. Many of them are index funds: passively-managed funds that simply invest in the stocks that are included in a published index such as the S&P 500, the Dow Jones Industrial Average, or the Russell 1000. Index funds are a very popular investment, even for large portfolios: because they are passively managed they have very low management overhead fees, and studies consistently show that over the long term very few investments deliver higher performance than an S&P 500 index fund (that is to say, active fund managers may deliver a short-term bonus by picking outperforming stocks, but over the long term their performance always reverts back to the mean).  This is why most employee retirement plans, college-saving programs, IRAs and other consumer-grade investment programs usually offer a broad-based index fund as an investment option, and since Amazon is included in the S&P 500 and the Russell 1000 (as well as several other indexes) it is very broadly held — though usually indirectly.

The balance of Amazon’s shares — roughly 20-22% — are owned directly by people who buy Amazon shares on the stock market and hold them in their personal portfolios. I would guess that a fair amount of that is in the hands of Amazon’s employees.

One interesting side note: Amazon encourages and discourages certain kinds of investing, partly because of its business model. It has yet to issue dividends, and it has chosen to let its stock price continue to rise (currently about $1500 per share) without splitting it. That categorizes it as a “growth” stock, and not an “income” stock. People buy it expecting the price to increase and then to sell it in the future to profit from the price differential. Stocks that offer dividends are very attractive for investment portfolios that need to generate cash every year, including retirement funds where people are living off their portfolio’s income and university endowments where the school is dependent on the endowment to fund its operating budget. Amazon’s high stock price discourages small investors, since many consumer-grade investment companies require transactions to include a minimum number of shares. While Amazon’s retail business generates plenty of cash that could be distributed as dividends, its business model dictates that those funds are plowed back into business expansion. As for the stock price, there’s no reason why Amazon can’t split its stock; it simply chooses not to.

Coming back to the title question: who owns Amazon? In a sense, everyone does: the stock is so widely held by mutual funds and ETFs, and especially index funds, that tens of millions of people own a slice of the company whether they are aware of it or not. Amazon stock is paying for kids to go to college and older Americans to live comfortably in their retirement; and yes, it’s also helping lots of rich people get even richer. By the way, the Seattle City Employees Retirement System is heavily invested in a Russell 1000 index fund (about $610 million as of last December), so Amazon’s success is contributing to our city employees’ future retirement as well.

But there’s another interesting question: who controls Amazon? The company is large and mature enough now that even though Jeff Bezos’ 16.3% ownership represents a vast fortune, control of the company is diffuse; there is no small group of people or institutions that collectively own enough of the voting shares (50% + 1) to be able to control decision-making — not even Bezos. To get to majority control, you would need to assemble a coalition of Bezos plus dozens of institutional investment managers, and then convince them all to vote the same way. There is no back-room cabal of rich aristocrats pulling all the strings. The company’s directors and executives have to lead the old-fashioned way: articulating a compelling vision and delivering on results so that enough shareholders want to keep them on.

If you’re an Amazon shareholder — even just a single share — you can attend the company’s annual meeting and vote. This year’s meeting is May 30, at Fremont Studios. The proxy statement gives you all the details on the issues and votes on the agenda. 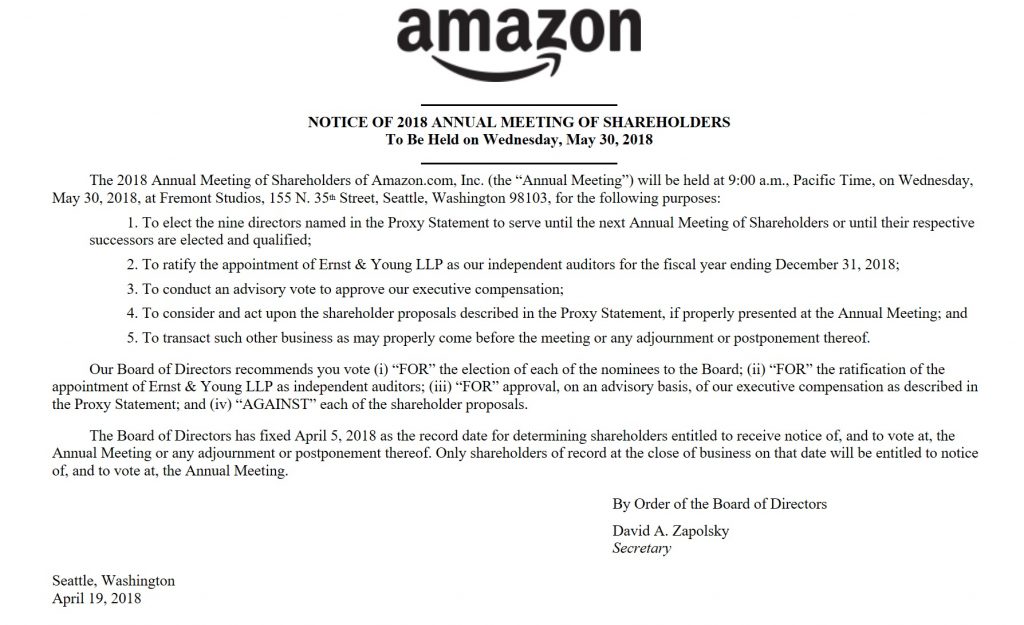