We’ve been waiting months for a consultant report on the Center City Streetcar project, since Mayor Durkan put it “on hold” pending financial review earlier this year. But the end of June deadline for that report has come and gone.  In the meantime, Durkan let slip a detail in a KUOW interview that has snowballed into speculation about how badly the project has gone off the rails — even in the face of strong political support to see the project through to completion.

On July 5, Durkan sat down with KUOW’s Bill Radke for an interview. Here’s what she had to say on the topic of the Center City Streetcar and the pending review: (emphasis mine)

Radke: “So are you saying it could be that Seattle will not build the line to connect the two existing streetcar lines? That still might not happen?”

Durkan: “That still might not happen. We’re looking at the options, and there may be other options that are available to connect those two things that won’t be a continuous route. We’re in the process now of looking at both the technical data, the ridership estimates, and also what will it do for, there’s a lot of businesses up and down First Avenue because we did utilities work that was necessary — some of those pipes were wooden —  but tearing up those streets takes a heavy toll on those businesses as well. So we’re looking at all those factors.”

Eleven days later, KIRO reported that quote as part of a longer story on the streetcar issues. That caught the eye of Council member Lisa Herbold, and last Friday in her weekly newsletter to constituents she said that she had asked Council staff to look into the matter: (emphasis mine)

While we are awaiting the results of the independent review of the Center City Streetcar ordered by the Mayor a media report noted that the new streetcars as designed won’t fit in the existing maintenance barns, and that there may be an issue of whether they fit the gauge of rail.

Council Central Staff, on my request, has verified the accuracy of this report; it appears the error will require either a change order for the design of the streetcars or incur new costs for construction of new or retrofitted maintenance barns. I am requesting that the Mayor’s Streetcar Assessment include full transparency in the added costs for this unfortunate error.

It’s disappointing to hear this—these issues of accountability need to be dealt with much earlier, and they highlight the need for the increased Capital Project Oversight the Council has been working on.

Yesterday the Seattle Times jumped in, diving a bit more into the specifications for the new streetcars.  And that prompted Mayor Durkan’s office to issue their own statement on the status of the review. It notes that there is a funding shortfall (previously reported) for the project, and that the consultant review (by KPMG) is ongoing. It adds:

“Concurrently with KPMG’s review, the Durkan Administration has also learned that:

In August, it is hoped that KPMG will finalize their report to provide their independent analysis of the project.  The KPMG analysis was much more complex than initially expected – including the review of thousands of estimates, design materials and correspondence.  The report will provide a fact-based review of costs, ridership, opportunities and challenges with building and operating the C3 streetcar.

The report has raised a series of questions including:

In addition, further questions not initially anticipated were raised regarding the entire streetcar system:

We are hopeful that the KPMG report will address nearly all of these questions.

As a result of uncovering the challenges with the vehicle contract, a series of complex technical and engineering questions have been raised.  While these challenges became a general factor as part of KPMG’s review, a more detailed engineering review is critical to understanding the cost and feasibility of the project. Many of these additional questions could have further impacts on the capital costs of this project:

There’s a lot of talking in this series of events, but little actual information, a fair amount of speculation, and an abundance of questions. Let’s unpack it a bit, starting with the gauge of the track.

Railroad track gauge (the width between the tracks) is a well-known and well-established standard in the United States, 1.435 meters, dating back nearly 200 years to the United Kingdom.

The Seattle Times provided a link to the specifications document for the new streetcars. The document shows that the track gauge for the streetcars was written to the official standard. So if the cars are manufactured to a different gauge — which would be stunning given the wide application of the standard — that would be a manufacturing error, not the city’s mistake. 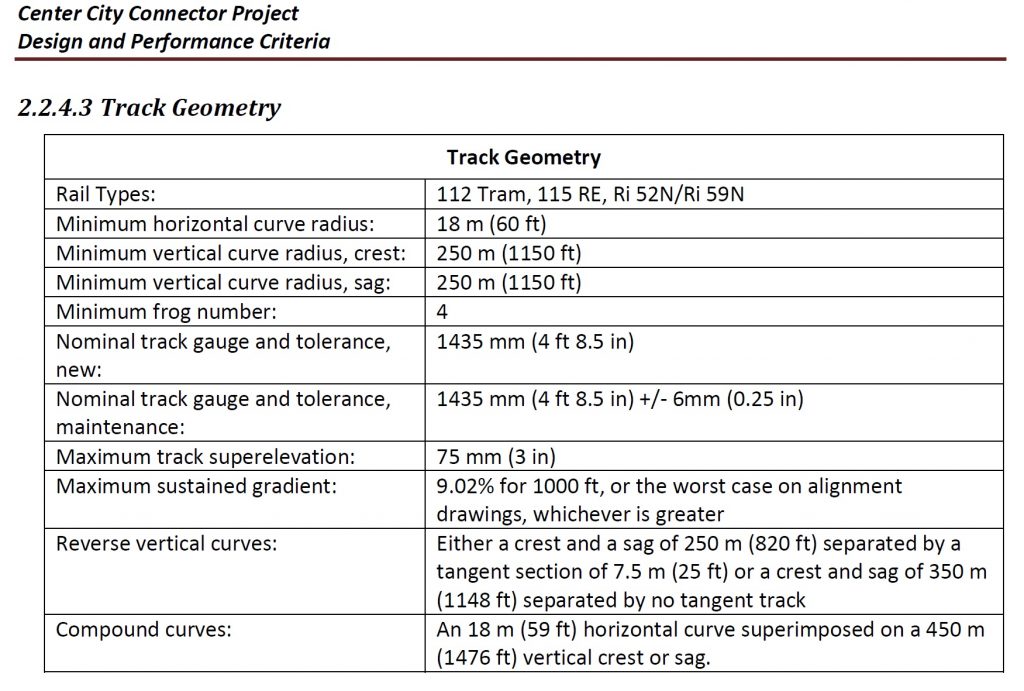 That said, the spec also allows the new streetcars to be longer and wider than the ones currently in use on the First Hill and SLU lines, as well as heavier. It also precisely specifies the “platform interface,” the exact distance from the center-line of the cars to the platform edge as well as the height of the platform at the doors, which is required to ensure that the cars align properly with platforms. That needs to be the same as the existing cars.

The track gauge shouldn’t be an issue. It may be that the tracks already installed on the First Hill and SLU lines may not be strong enough to support heavier cars, but that’s a very different question. And there’s some precedent for that: when the bus tunnel was originally built, they used the wrong tracks and later needed to tear them up and replace them when Sound Transit was ready to start running trains through the tunnel. The update from Durkan’s office yesterday specifically asks whether the First Hill and SLU lines can support the weight of heavier cars.

It may be that the Mayor misspoke in her KUOW interview when she said that the track gauge was an issue, and conflated the width of the cars with the width of the track. Her statement yesterday  reiterates that the new streetcars are heavier, longer and wider, but doesn’t reach any conclusions about incompatibility with the track gauge (though it asks the question again). However, there have been several recent mentions, including in Durkan’s statement, that longer and wider cars might not fit into the existing maintenance barn. If they don’t fit, it’s an issue, but not an unsolvable one. A much more serious issue would be if longer and wider cars don’t fit with the existing platforms and along the path of the existing lines — and Durkan’s statement suggests they are looking at that was well. However, the specifications document says that the platforms are 1.280 meters from the track centerline and the maximum vehicle width is 2.450 meters, which would make it 1.225 meters from the centerline — so as long as it’s built to specification, the platforms shouldn’t be an issue either. 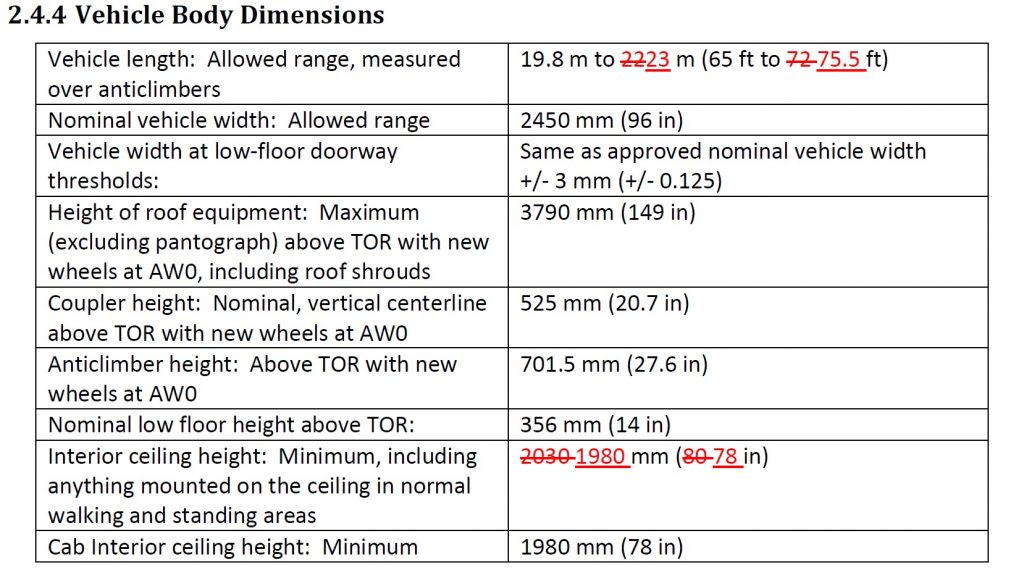 These are very technical questions, but ones that can be answered and verified with great precision by engineers such as the ones KPMG is using to conduct its review. A constant trickle of incomplete information makes for some good headlines, but doesn’t lead to good decision-making about the future of the project, so as frustrating as it is to wait for a delayed report before reaching conclusions as to what should happen with the project, that’s the best course of action. Nevertheless, a group of businesses calling themselves the Seattle Streetcar Coalition sent the Mayor a letter last month urging the Mayor to let the project go forward, while The Urbanist speculates on what the report says, claims that the Mayor has refused to meet with the group, and accuses her of an anti-transit bias.

The statement from the Mayor’s Office yesterday said that they plan to be transparent about the findings of the consultant and the city’s internal review:

To ensure full transparency and accountability in this project, the City will be releasing the KPMG report to the public once finalized. The Mayor has heard a range of opinions and questions on the project including from many businesses in downtown Seattle. She wants to continue to hear from the public and stakeholders as the KPMG report and engineering updates are released, so all stakeholders have the full details and facts regarding the project. No final decision will be made until budget, feasibility, and community impacts are understood.

They hope the KPMG report will be finished next month. Stay tuned, and try to reserve judgment until we have better, and more complete, information. At that point, it should become clear whether the Mayor was justified in delaying the project to conduct a review, and it should be easier to evaluate the options on how to move forward, incorporating technical, financial, transportation, political, economic and community considerations.