There was a lot happening today. New department directors, new protections for domestic workers, support for dairy workers, discussion of the proposed Waterfront LID, and what SPD is doing about recent “shots fired” incidents in the Central District.

This morning, Council member Gonzalez noted that several residents of the Central District have contacted her office to voice concerns about a recent spate of “shots fired” incidents in their neighborhood (Council member Sawant said that her office had been contacted by constituents too, and is responding to them). Gonzalez said that she has been in contact with SPD Chief Carmen Best to discuss the situation, and was briefed this morning. She said that SPD is aware of the issue, understands what the problem is, and is prioritizing the issue; they are targeted incidents not random acts, and are “regional issues.” Sawant referred to them as “gang-related” and reinforced that they require a regional response.

I followed up with Gonzalez to learn more about the situation and what SPD knows. She sent me the following statement:

There is no additional information I can share with you about these incidents in the Central District due to the sensitive nature of law enforcement operations.  I can, however, provide you with the attached statistical information that the Seattle Police Department compiled and provided to me that I will be sharing with constituent’s in the Central District.  If you have specific questions about the cases or the attachment, I’d ask you to contact the SPD’s PIO.

At this juncture, I have confidence that SPD is allocating resources to this specific area of the Central District in a manner that will minimize the ongoing risk of additional shootings and related injuries.  The public should be aware that these are targeted incidents of gun violence and SPD is working closely with regional law enforcement agencies and community partners to diffuse the tensions that are contributing to the violence.  Neighbors should continue to call 911 to report any actions they believe seem out of the ordinary.  The SPD has additionally committed to curating a list of neighborhood-based, violence prevention organization’s that community members can engage with on a long-term basis to help build social cohesion that will interrupt these episodes of violence now and in the future.

Gonzalez also forwarded this lengthy letter from SPD’s Christopher Fisher on the issue.  From the statement:

When we examine the reports of shots fired (see dashboard image below), through 9/10 (this dashboard will be updated early on 9/17/18), there have been 5 additional incidents compared to 2017, due to a series of events in August. While these incidents are up, they are not at historically unusual levels compared to trends since 2012. One factor that makes these incidents particularly impactful is their relative concentration in a specific area (or two) instead of being spread out across the neighborhood.

Additionally, given that most of the recent incidents are related to conflicts arising between groups/crews, they do tend to come in high frequency, short time periods. 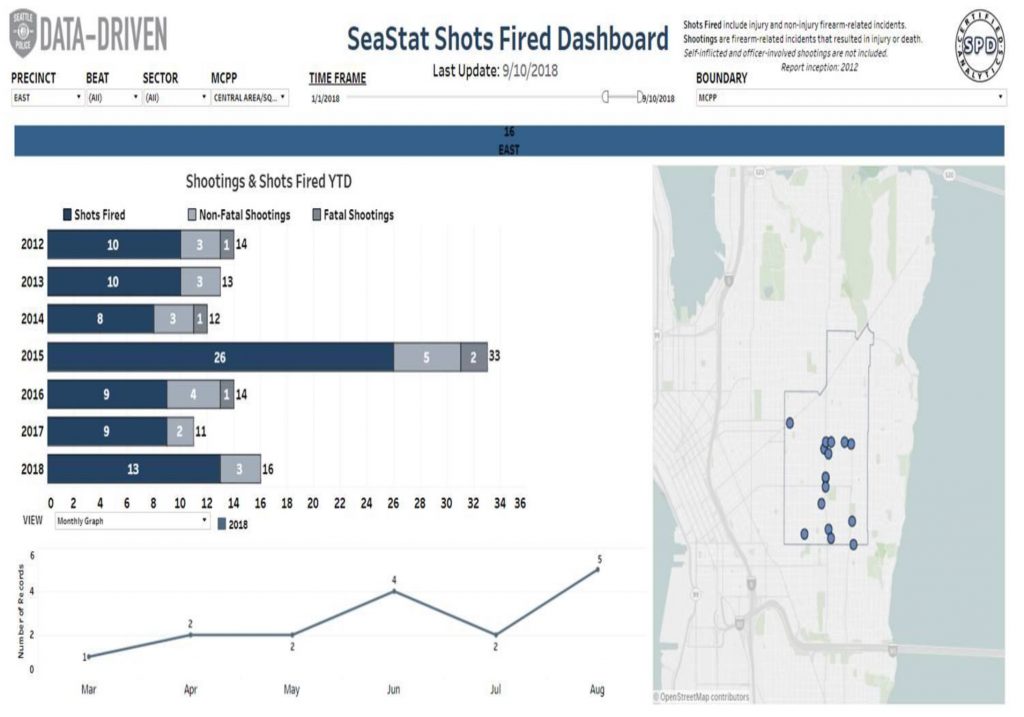 The SPD letter gives more details on what they believe has caused the shots-fired incidents, which they believe are tied to one individual recently released from prison who has returned to the area:

The Seattle Police Department closely monitors both the return of known violent offenders to communities across the city, and we work to stay informed about conflicts between groups operating on the street, particularly those who partake in violence. We are aware that a particularly violent individual recently was released from prison and has returned to the area. When this individual was incarcerated, there was a marked reduction in violence in the area. They are suspected of being connected to several recent shots fired incidents in the area. SPD is working with other local partners, as well as federal partners like the FBI Safe Streets Task Force, the U.S. Marshals Service, and the ATF Regional Gun Crime Task Force to locate this individual and to develop probable cause for this individual’s arrest. For the past few years, SPD has been an active participant in the Gun Crime Task Force. Our detectives are submitting every shell casing and gun recovered to the National Integrated Ballistic Information Network (NIBIN) to track which guns are being used in which crimes. This helps in both investigations and prosecutions. Working these avenues of investigation, this past week SPD, along with the King County Sheriff’s Office, made an arrest of a significant individual. This person being off the street will reduce the level of violence in the area.

SPD requests that residents call 911 if they see actions or behaviors that are concerning to them. “We are a data-driven department, and we cannot make informed decisions unless the community continues to let us know what they need to feel safe.”