As promised, Mayor Durkan delivered her proposed 2019-2020 budget to the City Council today. It’s going to take several days for me to go through all of the details, but here’s a high-level first take on it, with highlights and lowlights of what’s new.

The Mayor’s budget doesn’t propose any new taxes, other than the Families, Education, Preschool and Promise Levy on the November ballot — a large part of which is continuation of two current levies. So that means the city’s revenue growth for next year is dependent on growth in the existing tax base — which in turn is highly dependent on the local economy. Nationally, the economy is predicted to continue to see strong growth into 2019, but slower growth and higher risk of a recession in 2020. Locally, construction activity is expected to drop by 10.7% between 2019 and 2021. Sales taxes are predicted to increase 3.5% in 2019 and 2.0% in 2020. 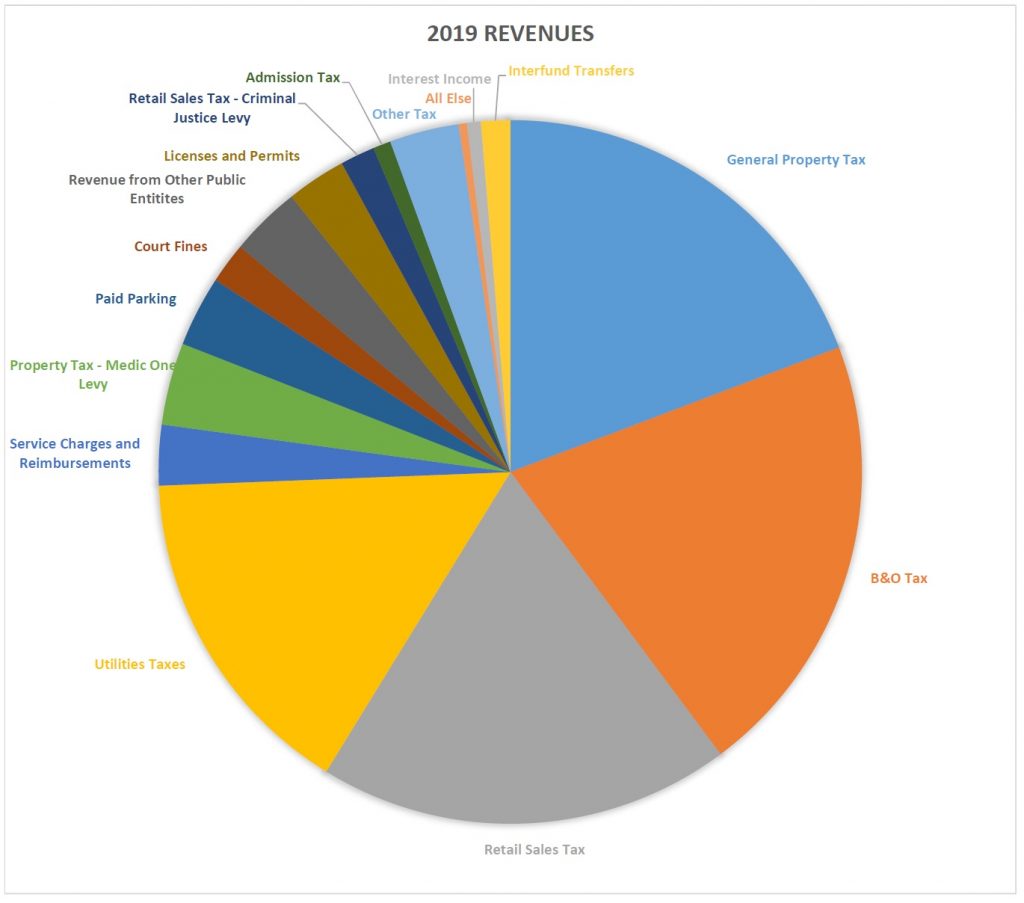 Revenue from all sources is expected to grow 6.16% in 2019, though “general subfund” revenue, money that isn’t restricted on how it can be spent, will only grow at 3.5%. In the meantime, local inflation is around 3.0%, which means that the city is sustaining its buying power over time but isn’t gaining the ability to do more. You can see in this graph that the “big four” are predicted to continue growing steadily in absolute dollars, but as the total amount grows, the percentage growth decreases — even before accounting for a potential economic slowdown. 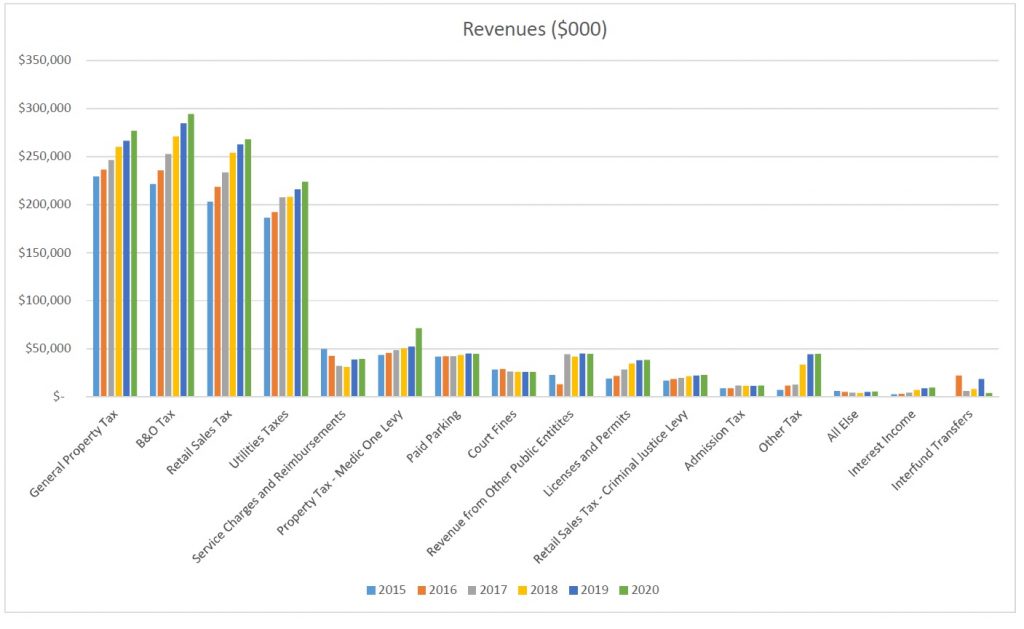 There are a few revenue highlights as well; in particular, both the soda tax and short-term rental tax are returning higher-than-expected revenues (I’ll leave the policy implications of those taxes for another day). But changes in revenue sources other than the big four are just fiddling around the edges; the net result is still that revenues are flattening out, and that is the biggest constraint on spending.

With no big influx of revenues, any new spending will come by cutting spending elsewhere. And this is what Durkan claims she has done with her proposed budget: she found nearly $50 million by scouring every department for places where money can be saved. They eliminated 150 positions, most of which were vacant and were determined not to be needed any more. They also reduced discretionary spending, travel budgets, and consultant contracts, on top of specific cuts within each department as deemed appropriate. And they reduced fuel expenditures, and this afternoon Mayor Durkan signed an executive order to cut the city government car fleet by 10%.

With the money they found, here’s what they chose to prioritize:

In her speech today announcing the proposed budget, Durkan emphasized four priorities: delivers basic city services, doing more to address the crisis in housing affordability and homelessness, “doing what’s right” to address inequities, and investing in building a city of the future that is welcome, innovative and vibrant.

While there are dozens of city departments, 88% of the expenditures are in just the ten largest. The two utilities, Seattle Public Utilities and Seattle City Light, represent more than have of the “top ten” and 46% of the city’s overall expenditures. 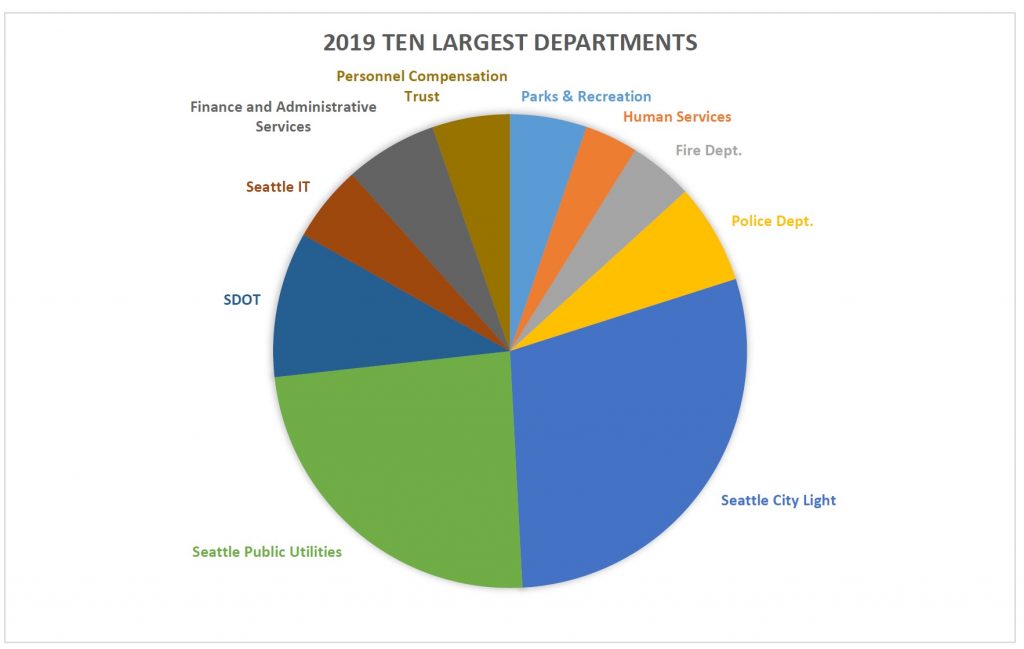 With the investments that Durkan made this year, most departmental budgets are relatively flat, with two notable exceptions: Seattle Public Utilities and SDOT. SPU is on a path to spend nearly as much as City Light in 2020; most of the increase is due to the Ship Canal Water Quality Project, a massive effort to fix the city’s sewer overflow problem over the next few years that is required under a consent decree the city signed with the EPA. The good news is that in a few years when the project is done, SPU’s expenses should drop back down to a more manageable level. 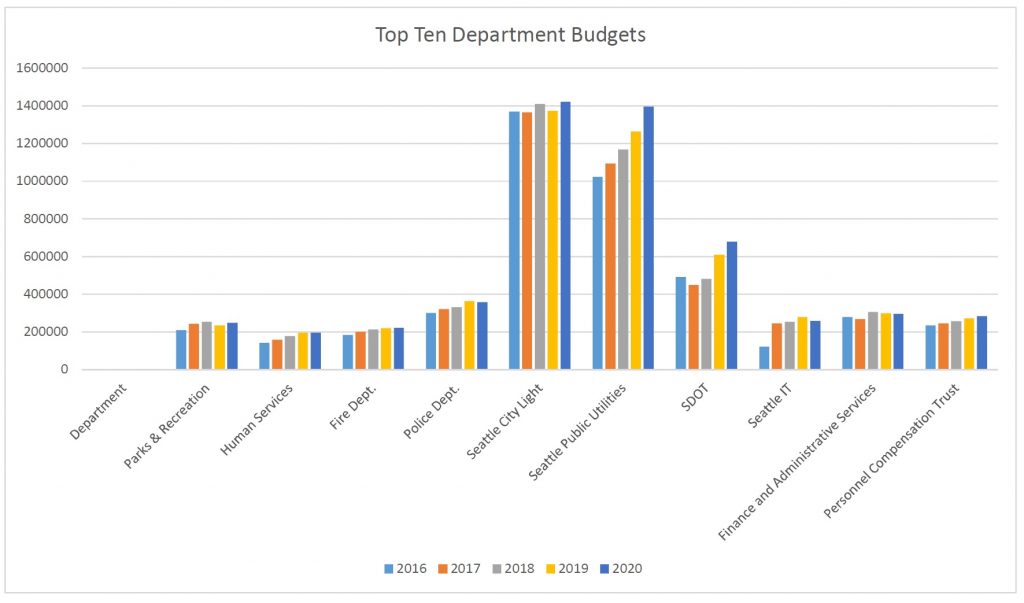 A few additional notes on issues related to the budget:

Wednesday and Thursday this week, the Council will be diving further into the details of the Mayor’s proposed budget.