This afternoon Judge James Robart held a status conference with the parties in the consent decree between the city and the Department of Justice over police misconduct. The issue at hand: now that the city has negotiated a new police contract, how and when to put that in front of Robart for his blessing.

Stating up front that he would not be making any substantive rulings today, Robart gave the city, the DOJ, and the CPC each twenty minutes to state their views on next steps for approval of the tentative agreement, as well as their thoughts on the merits of the agreement.

For context: last year Robart refused to approve the police accountability ordinance until the SPOG agreement was final, for fear that the two would conflict (he was right). In between those two events, the city also negotiated a separate contract with SPD captains and lieutenants, who are represented by a separate union (SPMA). The CPC has raised several issues with the SPOG contract, mainly pointing out how it conflicts with the police accountability ordinance. The city has responded that it was inevitable since many of the topics in the ordinance were subject to collective bargaining and it would be an unfair labor practice to try to legislate those issues unilaterally; further; it asserts that the true measure is with the 2012 consent decree itself, not last year’s police accountability ordinance.

Robart, as with other federal judges, won’t issue “advisory opinions.” He will wait until an item is in front of him, with an accompanying motion requiring him to make a ruling on one or more specific issues. In this case, he noted today that the tentative agreement has not yet been put in front of him with a motion to approve it, but was keen to understand what the city’s plan was to submit it. Much of that got sorted out today; both the city and the DOJ recommended that the proper next step was for the City Council to approve it, then the city could formally submit it as a final agreement (instead of a tentative one) and move that the judge approve it. There was an open question as to what would happen if the City Council rejected it (as the CPC has recommended); Robart made clear that in either case he would continue to oversee the implementation of the consent decree as he has done for the past six years.

That said, the judge did hint at some of his thoughts on the agreement. First, he rejected an argument that the city had made for approving the document: that since Robart has already found the city in “full and effective compliance” with the consent decree even before the police accountability ordinance has been implemented, and since the SPOG agreement only strengthens police accountability, it was therefore logically impossible for the agreement to push the city out of compliance and thus Robart must approve it. Robart laughed off that argument and bluntly told the city never to raise it again.

Third, while noting that he wasn’t interested in the general issue of police officer wages, Robart once again specifically called out the provision of the tentative agreement that grants an additional 2% pay raise for officers when they are wearing body cameras. Pointing out that he has already ruled on the issue of body-worn cameras, he angrily objected to what he viewed as a “bribe” to officers to get them to agree to wear body cameras — which he had already authorized.  As the discussion on that topic proceeded, it became clear that Robart was under the impression that individual police officers had the option not to wear a camera; the city clarified that in fact under the agreement all uniformed police officers are required to wear the cameras. Robart seemed to back down at least a bit on his objection, though he remained skeptical and seemed determined to give that provision a close inspection.

Both the city and the CPC made some strange decisions on how to spend their allotted twenty minutes. Mayor Durkan used three-quarters of the city’s time to personally deliver a “stump speech” of sorts in support of the agreement, touching lightly on some of the issues but mostly focusing on what she sees as the benefits of the agreement. She forcefully asserted that there is nothing in the agreement that is inconsistent with the consent decree, though Robart later called that remark “hyperbole” and said that he doesn’t believe it to be accurate (while not pointing to any specific offending provision).

The CPC, represented by Lisa Daugaard, spent much of its time rehashing the history of its own role in the police reform efforts since the consent decree was put in place, seemingly for the sole purpose of highlighting that it was not allowed to have the same level of involvement in the negotiation of the SPOG agreement. It argued that it should have been brought in to sit at the table during the negotiations as a technical advisor (the city argued that would be illegal; the CPC argues that it isn’t). Daugaard reiterated the CPC’s recommendation that the city and SPOG split out from the agreement the portions that implicate the police accountability ordinance, pass the rest now (including the pay raises), then immediately reopen the implicated parts for further negotiations. Despite repeated claims by Daugaard that the CPC has a close working partnership with SPOG, CPC co-chair Rev. Harriett Walden said after the hearing that the CPC has not discussed their recommendation to re-open negotiations with SPOG.

Daugaard also raised one specific issue whether the CPC believes that the tentative agreement conflicts with the consent decree: that provision declaring that there is an “elevated” standard of proof (above “preponderance of the evidence”) for termination cases involving dishonesty. She said that the CPC believes it undermines a core tenet of the consent decree: promoting public safety and public confidence in the police force.

For its part, the DOJ tried to stay in the middle ground. Its position is that its preliminary review found the tentative agreement to be consistent with the consent decree, but it stated that if the City Council approves the agreement the department would like to do a more thorough review. In particular, it too wanted to delve into the standard of review to remove the ambiguity from the word “elevated.” The DOJ also noted that it has previously reviewed and approved the OPA’s procedure manual, but if the SPOG agreement requires revisions to it, the department will need to conduct another review. But it too believes that the correct next step is for the City Council to vote to approve the contract; then it can be submitted to the court as a final agreement and a full briefing schedule can be established to thoroughly explore the issues and inform Robart’s decision.

Robart seemed content to wait until the City Council voted to approve the contract before moving forward with his review. According to Council member Lorena González, she will be bringing the contract up for a final vote by the full Council at its meeting next Tuesday, November 13th. In a press conference after the hearing. she said that there would be opportunity for public comment next Tuesday, but she would not be scheduling a separate public hearing on the contract. She explained that she did not want to create a false impression that the Council could amend the agreement, since they may only vote “yes” or “no.” González also noted that while she has heard the feedback from the CPC loud and clear, she hopes that her colleagues vote to approve the contract. She emphasized her belief that Judge Robart “can make an important contribution by taking a good hard look at the contract” as an objective third party. 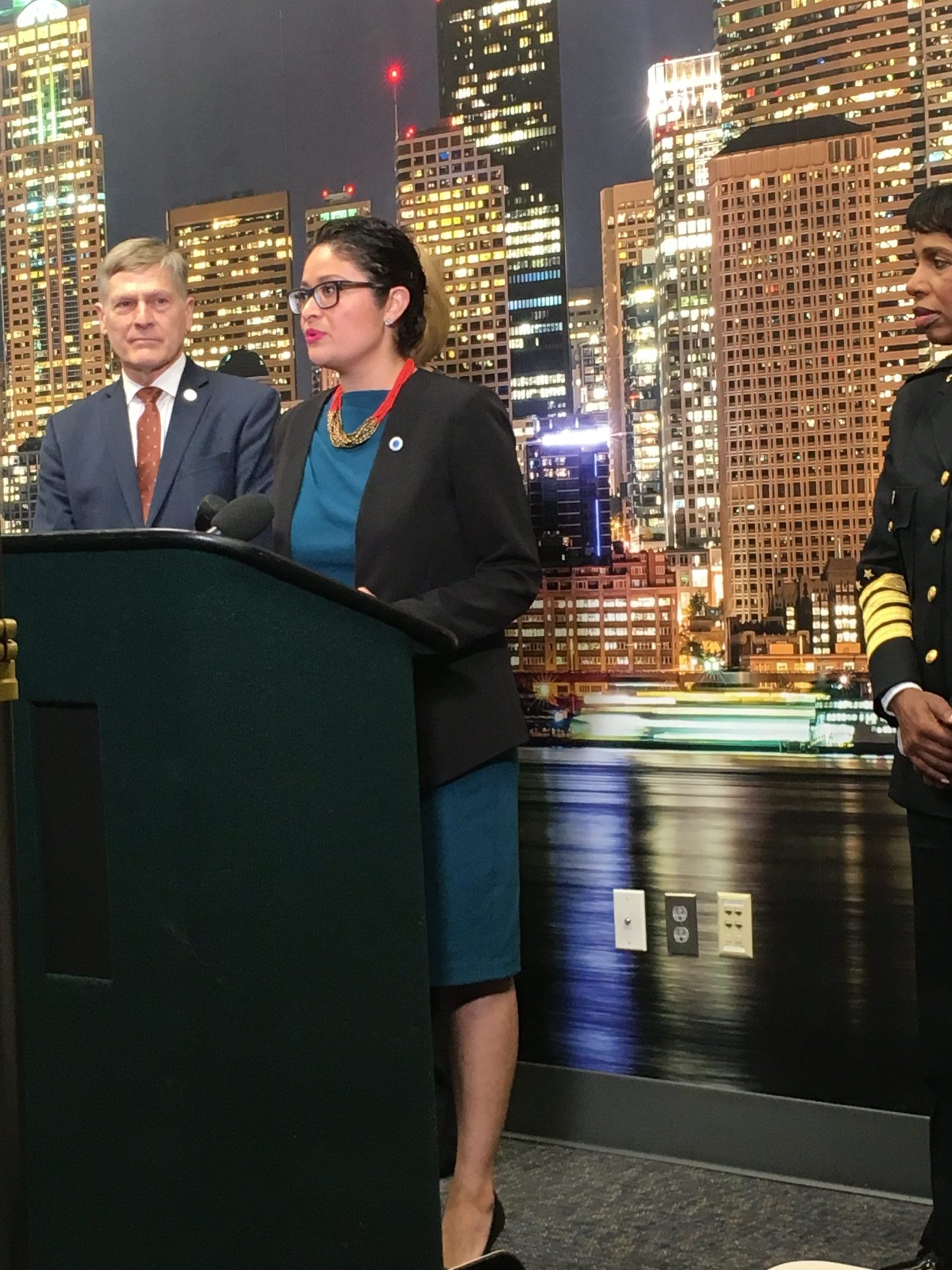 Mayor Durkan doubled down on that point. Durkan, who was US Attorney for the DOJ in Seattle and negotiated the consent decree from the other side in 2012, said that this is why they insisted on a consent decree: so that an independent federal judge would have the final word on what is required for constitutional policing. “He is going to hold all parties’ feet to the fire.” 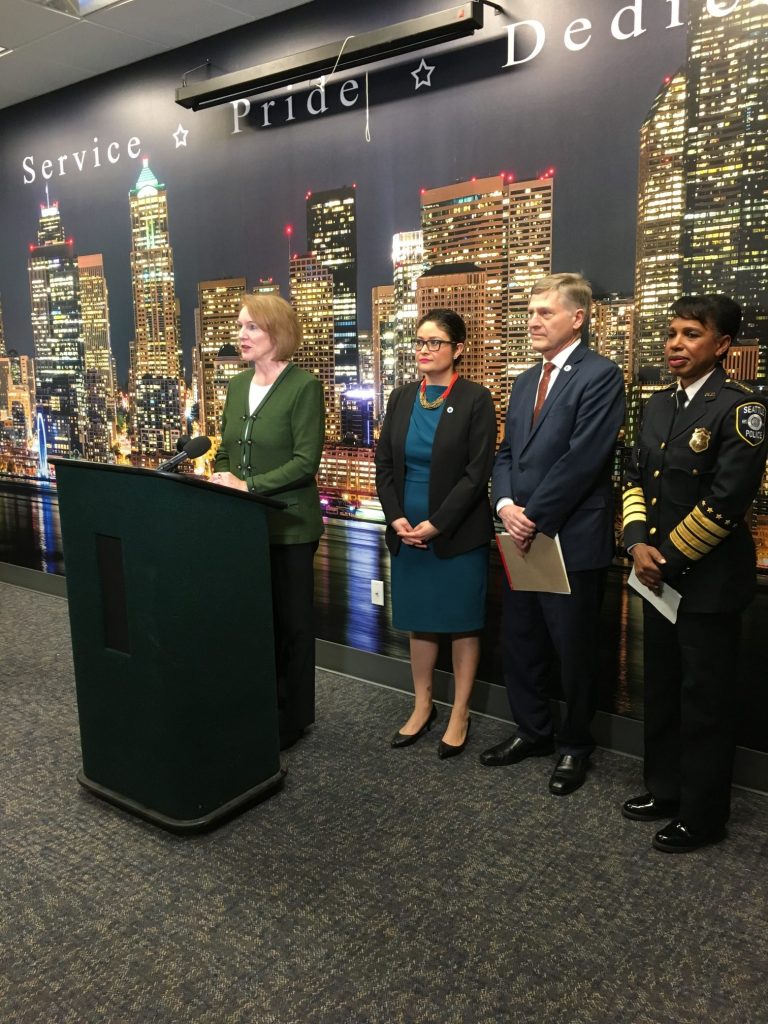 Stay tuned for the City Council vote next Tuesday.