This morning, Council member Lisa Herbold’s bill requiring developers to replace any affordable housing units demolished by construction projects got its first hearing, in the Planning, Land Use and Zoning Committee.  And it didn’t get the warm welcome that one might expect. Rather, there was a complicated and sometimes frustrating conversation.

This isn’t the first anti-displacement ordinance before the Council; in fact, it’s the third. The first passed in 1980, though it reads like it could have been written today: 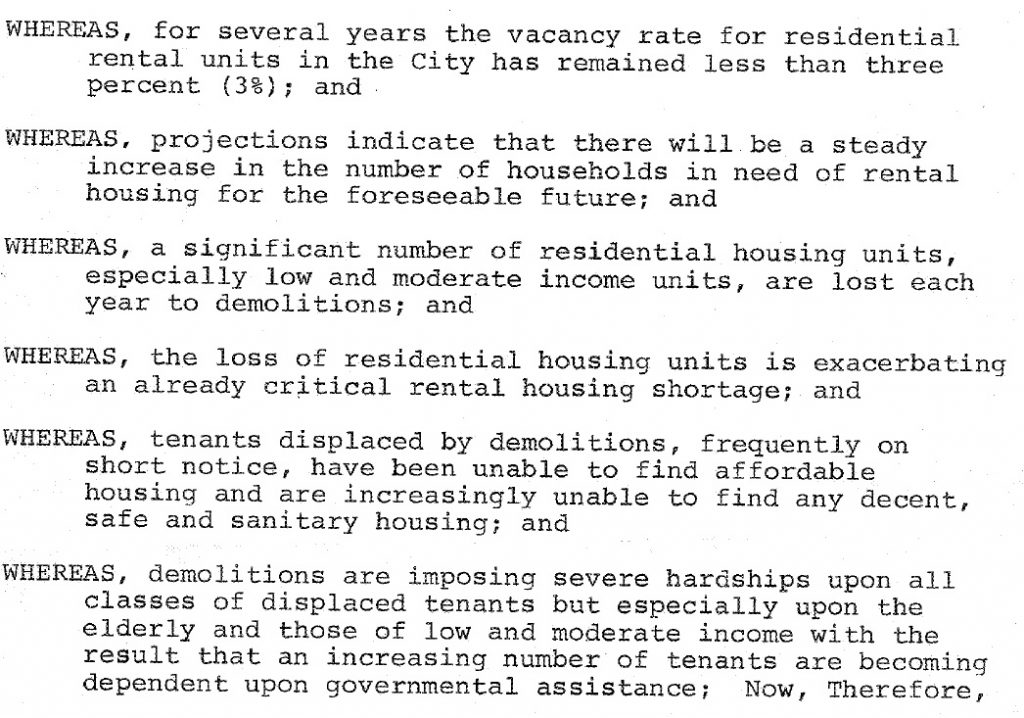 That bill, known as the “Housing Preservation Ordinance,” required a “housing demolition license” in order to demolish any housing unit, the fee for which would be the replacement cost for the demolished units. It was passed by the City Council, but thrown out in King County Superior Court because it was an invalid tax on construction that is prohibited under state law:

The City Council immediately went back to work and in 1985 passed version 2.0 of the Housing Preservation Ordinance. This version was very similar to the first, but required the developer to replace a certain percentage of the affordable housing units destroyed, or alternatively to pay into a low income housing replacement fund. It too was challenged in court, and this time it went all the way up to the state Supreme Court. It ruled that the ordinance was still a prohibited tax:

The City, however, argues that the ordinance does not require direct payment of money to the City and therefore cannot be characterized as a tax. We disagree. Requiring a developer either to construct low income housing or “contribute” to a fund for such housing gives the developer the option of paying a tax in kind or in money. Furthermore, the payment the owner must make is not being used by the City to regulate the demolition of low income housing units. The City is instead shifting the public responsibility of providing such housing to a limited segment of the population. This shifting is a tax, and pursuant to RCW 82.02.020, it cannot be allowed.

But it actually gets worse, because the Supreme Court took the unusual step of speaking to the larger constitutional implications of what the City was trying to accomplish with the ordinance:

Moreover, we have grave reservations about the City’s ability to impose such a levy under its inherent police powers. The Housing Preservation Ordinance would apparently require San Telmo to either build a new, comparable housing project, or contribute approximately $ 1.5 million to the low income housing fund. We seriously question whether faced with that potential levy, San Telmo would be in a position to make any profitable use of its property. If not, the ordinance would constitute a taking under Washington Const. art. 1, § 16 (amend. 9) …

We sympathize with the problem created by the low income housing shortage in the city of Seattle. However, the City must cure this problem by the lawful exercise of powers granted to it by the constitution and the Legislature. The City can ameliorate this housing shortage by legitimate rezones or, as it has recently done, by passing a multimillion dollar levy on all property owners in Seattle. Nevertheless, the City may not constitutionally pass on the social costs of the development of the downtown Seattle area to current owners of low income housing. The problem must be shared by the entire city, and those who plan to develop their property from low income housing to other uses cannot be penalized by being required to provide more housing.

(again, this could have been written today)

Herbold’s new bill could be considered Housing Protection Ordinance 3.0. This time, rather than relying on a demolition license as the underlying mechanism, it leans on the city’s power under the State Environmental Policy Act (SEPA) to require mitigation of impacts to the environment. Herbold points out that the state has defined “housing” as an element of the environment for the purposes of SEPA environmental impact analyses. The bill authorizes the Department of Construction and Inspections to require mitigation of the loss of affordable housing when permitting commercial development projects that:

SDCI could allow mitigation in one of two forms, whichever is lesser:

If passed into law in this form, the ordinance will be instantly challenged again in court. This time the issues will be:

The litigation for these questions will tie this ordinance up in court for years, and there’s a good chance it will once again be tossed out.

But before it even gets that far, Herbold needs to win over the support of her colleagues — and that was less than certain today. Council member Mosqueda in particular, who in the MHA hearings has championed creating as much housing as possible, pointed to the MHA final EIS study, which concluded that demolition had a relatively small impact on displacement. Most displacement, she claimed, is about rent-burdened tenants and the general lack of housing stock. Herbold took issue with that, claiming that the MHA EIS grossly underestimates the number of demolitions happening in the city. She noted that the EIS study relied on tenant relocation assistance records to identify displacement trends, but because people earning between 50% and 80% of AMI don’t qualify for relocation assistance, they weren’t counted. Herbold also pointed to the University District, where MHA has already been enacted. Herbold noted that the EIS predicted the loss of 60-200 units of affordable housing over 20 years, but to-date pending projects are already looking to remove 100.

Johnson raised issues about what the impact would be of layering these kinds of requirements on top of MHA, implying that it might hinder development altogether — reducing the production of housing units altogether as well as MHA-funded affordable units. Mosqueda noted that MHA isn’t a displacement mitigation tool, but a tool to build affordable housing, so if the anti-displacement ordinance would negatively affect the number of MHA units built, she wants to know.

The Council members also discussed a few modifications to Herbold’s proposed bill, including:

They also raised the possibility of lobbying the state legislature for changes to the Multi-Family Tax Exemption program to create a tax incentive for preserving affordable housing.

There was no vote today on Herbold’s bill (nor was one planned). In the end, the Council members sent their staff off to do more research and analysis, particularly on the impacts to the MHA program. If that work is complete in time, Johnson committed to scheduling a follow-up conversation for his next committee hearing on March 20th — two days after the scheduled final vote on the MHA legislation.

One other side note: there was a minor dust-up between Herbold and Johnson in the meeting over whether Herbold could bring representatives from Puget Sound Sage to the committee table to testify on issues related to the bill. Puget Sound Sage has already sent a letter to the Council, lobbying in favor of Herbold’s ordinance. Some Council members, including Herbold, Mosqueda, and most notably Sawant, make a regular practice of bringing community advocates to the table in their committee hearings to testify in favor of a piece of legislation. Johnson, however, has maintained a policy of not allowing that practice in his committee, and he refused to budge on that today when Herbold tried to invite them up.