This morning, the City Council voted out of committee four bills, creating new protections for hotel workers, which have been in the works for several months. Once voted into law, it will replace the embattled Initiative 124. 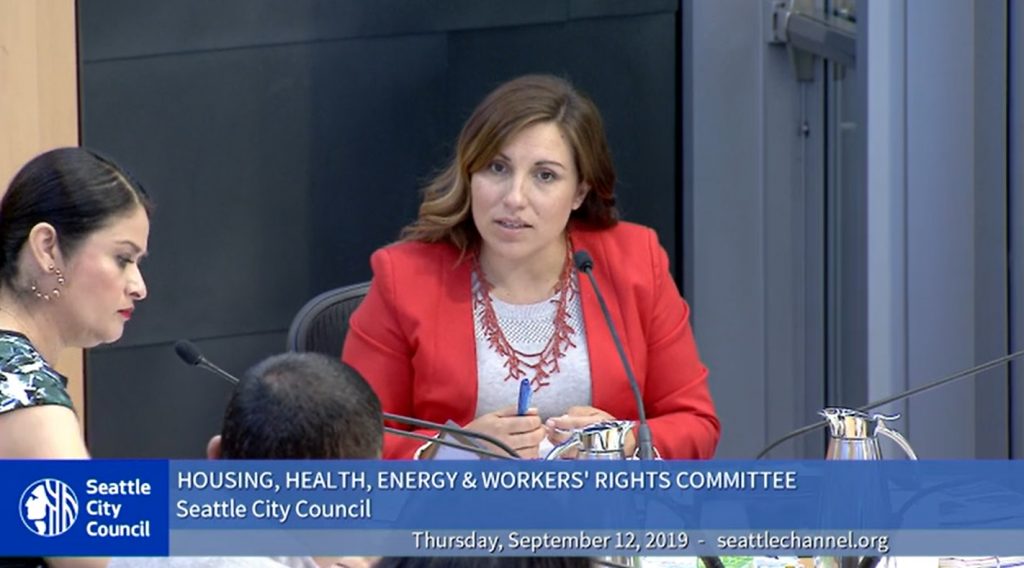 The four bills in this package of legislation cover:

The first three bills, which were all discussed and amended in committee last week, saw last-minute amendments with minor technical corrections. The bills also saw one more tweak to the definition of the “ancillary businesses” that they apply to, incorporating from the NAICS standards the definition of a hotel’s “purpose.”  Council member Pacheco tried to push through an amendment that would further narrow the set of food and beverage businesses swept into the set of “ancillary businesses,” but Council members Mosqueda, Gonzalez and Sawant voted it down.

The fourth bill (healthcare), which hasn’t had a hearing in several weeks, emerged with a new version today that rewrote several substantive provisions. As I’ve written before, the previous versions of this bill were illegal, in that they violated the federal ERISA pre-emption on local and state regulation of employee benefits packages. The bill’s authors had tried to wriggle around that limitation, but ended up with some strange provisions in the versions considered before today. For example, the bill dictated a minimum amount that an employer must spend on healthcare for each employee, based on the prices listed on the state health-exchange market, but didn’t account for larger companies that could negotiate group rates that were lower than the market rate on the health exchange. The Council members tried to “fix” it by exempting any company that provided a gold-level health plan to their employees, but in so doing added one more legally impermissible connection to ERISA benefit plans.

The new version introduced and adopted today thoroughly scrubs the bill of references and connections to ERISA benefit plans. Instead, it declares its intent to ensure that hotel employees have access to quality healthcare through additional compensation. It falls back to listing minimum employer healthcare expenditures, while giving employers several additional options for qualifying expenditures other than paying for a health plan — including just paying the amount directly to the employee.

As Council member Gonzalez explained during the committee meeting, the rewrite is modeled after the City of San Francisco’s Health Care Security Ordinance, which similarly requires the city’s employers to make minimum payments for employees’ healthcare expenses. The HCSO was challenged in court as a violation of the ERISA pre-emption, but in 2008 the 9th Circuit Court of Appeals ruled in the city’s favor, finding that the ordinance was legal.  So the closer Seattle’s healthcare ordinance for hotel workers is San Francisco’s HCSO, the more likely it is to survive legal challenges.

With that in mind, the best way to think of the healthcare bill adopted this morning is as a “minimum wage” ordinance for hotel workers and ancillary businesses, which specifies a minimum amount employers must spend for healthcare on top of the regular minimum wage. There are some implications of that; one is that employers that negotiate lower costs for their employees’ health care plans must still pay the difference between that amount and the required minimum under the ordinance. In the earlier version of the bill, the minimum amount was pegged at 80% of the cost of a gold-level plan; that has been revised down to 75% in consideration of the discounted rates that employers can obtain. However, hotel operators still pushed back hard on the notion that they would be punished with extra costs if they negotiated a good deal on behalf of their employees; that led to the short-lived exemption for any companies providing a gold-level plan. But in trying to walk the tightrope of requiring healthcare without running afoul of ERISA, the city is caught in a trap of its own making: either it punishes companies that negotiate good deals by requiring them to pay more, or it sets the minimum expenditure so low that it allows companies to obtain lesser levels of healthcare coverage than the “gold” level it is aiming for. Certainly for smaller companies without negotiating power, it will be cheaper for them to just pay their employees in cash the 75% figure than paying for a gold-level plan — even though it won’t be enough money for their employees to buy a gold-level plan on their own.

And of course if companies that don’t offer healthcare today end up paying their employees the minimum healthcare expenditure directly in cash because it’s the least expensive option (a real possibility), there is no guarantee that the employees will actually use the money to obtain healthcare.

This bill has moved from “how do we ensure that all hotel employees have gold-level healthcare plans?” to “what’s the farthest we can get toward the goal that will still be legal?” The resulting bill has a lot of problems, but it is still probably better than doing nothing.

The four bills passed out of committee this morning will go to the full Council on Monday for final approval. Then at Council member Mosqueda’s next committee meeting (the final one for the calendar year), she intends to take up a bill formally rescinding Initiative 124, which today’s four bills replace.  And that will, in turn, moot the challenge to I-124 currently in front of the state Supreme Court over whether it broke the prohibition on legislation that covers more than one subject.

Thanks for reading to the end!  Articles like this one take time to research and write. If you find my reporting valuable, please consider making a contribution to support my work. Even just $1 a month helps. Thanks!