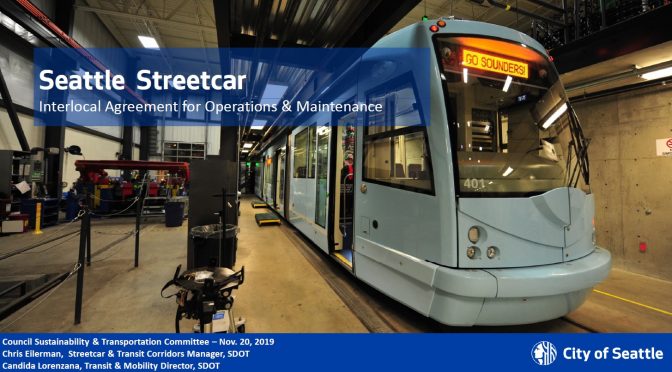 This morning, the Council’s Sustainability and Transportation Committee advanced an extension of the interlocal agreement between SDOT and King County Metro for operation and maintenance of the two existing streetcar lines on First Hill and in South Lake Union.

The current agreement, signed in 2014, expires at the end of December. Under the agreement, Metro operates the two existing lines on behalf of the City.

There are some notable changes in the new agreement that improve upon the existing one:

According to SDOT officials, while the agreement does not explicitly include any provisions for operation and maintenance of the Center City Connector streetcar (if built), it is structured so that it can easily be extended to cover maintenance and operations of the new line without negotiating a new agreement.

The $1.55 million subsidy is a bigger deal than it sounds; it is one of two subsidies that is helping to keep the existing streetcar lines afloat. The other, $5 million a year from Sound Transit, supports the First Hill line and expires at the end of 2023. That will also need to be renegotiated in the next few years — and Initiative 976’s dramatic cuts to Sound Transit’s funding casts a dark shadow over it.

The County Council must also approve the agreement; it voted it out of its Mobility and Environment Committee yesterday and expects to approve it within the next two weeks.