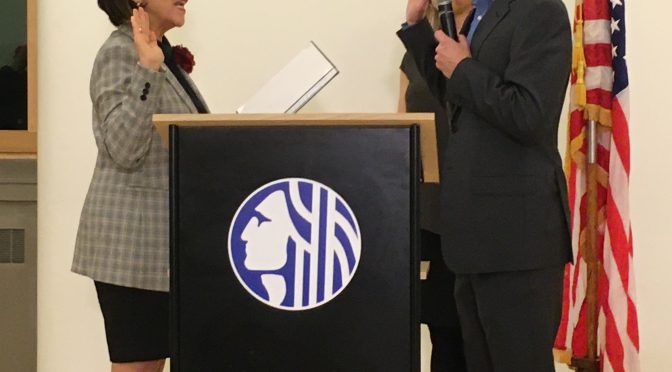 Late this afternoon, King County Elections certified the results of this month’s election. And at 6:15pm, Alex Pedersen took the oath of office as the Council member for District 4.

Because Rob Johnson resigned last spring and Abel Pacheco was subsequently appointed to take his place, Pedersen replaced Pacheco as the Council member for District 4 as soon as the election results are certified.

The swearing-in ceremony took place at Building 30 in Magnuson Park, in Pedersen’s district, and was administered by City Clerk Monica Martinez Simmons. Afterward, Pedersen gave a brief speech; you can read his full remarks here. He highlighted his campaign promises of fiscal responsibility and accountability to the voters. He also decried the large corporate PAC contribution by “interest groups and corporations”‘ in the election and praised Council member Gonzalez’s proposed legislation to curtail corporate PAC contributions. Pedersen also proposed two new Council committees: one for climate change, and one for fiscal accountability.

In a brief interview after the ceremony and speech, Pederson told SCC Insight that at the top of his priority list for his first days in office is the new proposed regional governance structure for the homelessness response. Erica Barnett reported yesterday that the city and county are working on a revised proposal that no longer includes an autonomous governing body. Pedersen said tonight that the original proposal was “ok,” but that he wanted elected officials to have more of a voice, as well as “a way to jump in if something goes wrong.” He also said that he preferred a model where the operating committee continued to be appointed by elected officials, rather than the original proposal’s model where eventually the committee would appoint its own membership.

Pedersen has already hired his four staff members, who all start work tomorrow. From the press release:

Thaler is a controversial pick: he is well-known in City Hall for his participation in multiple “NIMBY” legal challenges of land-use actions by the city, including an appeal of the Environmental Impact Statement for the MHA legislation that was finally passed in March after being tied up in legal challenges for years. Pedersen defended his hiring of Thaler, touting his background as an environmental lawyer and analyst, and saying that he was looking for “diversity of viewpoint” on his staff.