As City Council member Kshama Sawant and other activist groups have spun up their “Tax Amazon” campaign, they have violated several city ordinances and state laws.

Today the Seattle Ethics and Elections Commission officially charged Sawant with one of these violations.

The “Tax Amazon” campaign has indeed mobilized: it has a web site (registered to Calvin Priest, a Socialist Alternative employee and Sawant’s husband), and has held a string of organizing meetings over the past few weeks. At their January 25th meeting, the group passed a resolution establishing their intent to put a voter initiative on the November 2020 ballot to impose a new head tax on large companies in Seattle. The campaign is also gathering names on a petition opposing a preemption clause in HB 2907, the bill currently pending in the state legislature that would authorize King County to impose a payroll tax.  The Tax Amazon campaign is also fundraising, soliciting donations on its web site.

Sawant’s office has been vocally supporting this effort; they have been using Sawant’s official email account, constituent emailing list, and city-hosted web site to promote the campaign, its events, and the need for a ballot initiative. And that is the source of several violations.

Under both Seattle and state law, public resources may not be used to organize campaigns for ballot initiatives. Sawant is doing precisely that: her web site has been hosting information about the ballot initiative campaign, including promotional posters and flyers, a copy of the resolution on the ballot initiative, and archives of the group’s meetings. Her office has been actively recruiting people to the ballot campaign since mid-January (here is an email her office sent out on January 16 that makes their intentions perfectly clear) 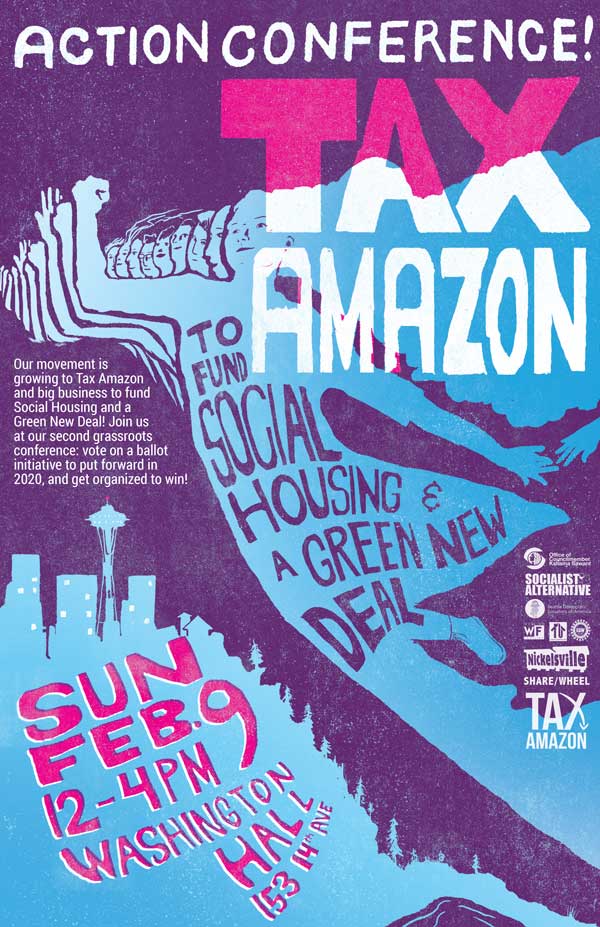 Sawant’s Council office is listed as a co-host of the campaign’s events, and Sawant (listed in her official capacity as a City Council member) is a co-chair of the ballot initiative campaign committee. The web site actively encourages people interested in helping the Tax Amazon campaign to call her office for assistance in getting involved. 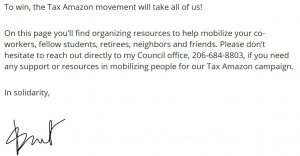 Under state law, public funds also may not be used to lobby the state government on legislative matters outside lobbying efforts officially sanctioned by the Council on behalf of the city. Since the Tax Amazon campaign is petitioning to keep preemption out of HB 2907, Sawant’s Council office support for the Tax Amazon campaign violates this law as well.

The Tax Amazon campaign is also flouting state campaign disclosure laws. Since it is actively soliciting contributions, when it officially adopted a resolution to organize a ballot initiative on January 25 (and arguably before, since it was both fundraising and discussing the initiative before January 25) it was required to register with the state Public Disclosure Commission and the Seattle Ethics and Elections Commission  as a political committee within 2 weeks: under state and Seattle law, filing is required within 2 weeks of the beginning of fundraising. As of this writing, the campaign has not registered either with the PDC or the SEEC. It was also required to register a bank depository for campaign fund contributions, and it has not done that either. Needless to say, there has been no official reporting of campaign contributions.

This afternoon, the Seattle Ethics and Elections Commission officially filed charges against Sawant for the first violation above: using city resources to promote a ballot initiative. It also included a second charge: that the same activity violated the city ordinance that prohibits city resources from being used for other than a city purpose.

Wayne Barnett, Executive Director of the Seattle Ethics and Elections Commission told SCC Insight this afternoon that he is not yet looking into whether the Tax Amazon campaign is violating the laws regarding filing with the SEEC and PDC.

A hearing on the charges filed today is scheduled for March 4.