Now that the first first healthcare crisis for COVID-19, the lack of testing, is starting to get addressed, it’s time to ask the next question: when the outbreak hits its peak, will there be enough hospital beds in King County for all the people who need them?

According to the Washington State Hospital Association, there are about 5,200 hospital beds in King County, excluding long-term care and behavioral health facilities; about 2.33 beds per 1000 King County residents, which is just under the national average of 2.4. On average, hospitals run at about 65% capacity, leaving about 1,800 open beds. If pressed, hospitals could decrease their occupancy by cancelling elective inpatient procedures and transferring some patients to long-term care and other facilities that can handle their needs. Let’s assume in a crisis like this they can double the available hospital beds to around 3,600, with the remainder dedicated to all the patients who need the critical life-saving services that hospitals provide for a variety of illnesses, injuries, and other issues. We’ll come back later to a discussion of the region’s capability to “surge” medical resources, but for now that’s a decent approximation of what is available today in King County: 3,600 hospital beds.

Now we turn to estimating the need, i.e. how many COVID-19 patients will require hospitalization? That’s really a two-part question: how many people in King County will contract COVID-19, and then how many of those will become so sick as to require hospitalization? The latter question is the better understood of the two: data collected from around the world suggests about 5% of COVID-19 patients are hospitalized. That figure can certainly vary based upon demographics, health of the population, and other factors, but 5% is a good rough figure for us to use. And remember: in the absence of widespread testing, we will notice the most serious cases first, which is why the current hospitalization figure for COVID-19 in King County is much higher than 5%; as testing broadens, that will come down.

Answering the first question, how many people in King County will contract COVID-19, is tricky. In Wuhan, China, through drastic interventions they have kept the number of COVID-19 infections under 1% of the population. On the other hand, seasonal influenza in the United States tends to infect around 8% of the population in a typical year. Officials believe that COVID-19 spreads more easily than flu, but on the other hand we put in place far less measures to suppress influenza’s spread. King County’s population is 2.23 million; 1% of that would be 22,300 people, and 8% is 178,400. While we don’t have enough data to estimate what the “epi curve” for COVID-19 will look like in King County (or anywhere else in the country in order to predict its peak, for the purposes of this exercise we can at least see what it would look like at 1% and 8%. Keep in mind also that the rate of spread for a virus isn’t constant over time; as the infection rate increases, people become increasingly willing to take more severe action to stop it. So while some have predicted that COVID-19 could potentially infect 20-30% of Seattle’s population, I suspect that by the time it reached 1% we would have draconian measures in place similar to what China (and now Italy) imposed.

With that all in mind: if 1% of King County contracts COVID-19, and 5% of those people require hospitalization, that would be 1,115 patients — well within the capabilities of the local hospital system. But if 8% contract it, there would be 8,920 in need of hospitalization, well beyond the current capacity. The hospital beds fill up at about 3% — anything more than that and we will have a problem.

How fast might that happen? That’s also a tricky thing to model: we need to know how many cases we have now, and how fast the virus is spreading — and unfortunately (once again) because we don’t have broad testing data, we only have educated guesses to both of those questions. As of this afternoon, there were 190 confirmed cases in King County. But University of Washington’s Virology team has used genetic analysis of COVID-19 samples from patients here in King County to estimate how long it’s been present and spreading in the community, and they predict that there are around 1,100 cases in the county right now.

Spread rate is measured by “R,” the number of people that an infected patient will pass the virus on to. Estimates for COVID-19 generally range from 1.4 to 3 for “R0,” the initial rate of spread if there is no immunity, no awareness, and no active interventions in the community. But today there are awareness and significant measures in place to try to slow the spread. While a month ago the “R” might have been 2.0 or above, today in King County it’s probably toward the lower end of the range — let’s say 1.5.

If we go just by the confirmed case count (190) as our starting point, then the growth looks like this:

Now if we use 1,100 cases as our starting point today, we’ll hit 1% at the beginning of May, potentially fill up the hospitals mid-May if the outbreak doesn’t peak, and reach 8% mid-June:

So if the UW virologists are right about the number of infections today and we don’t further suppress the spread of COVID-19 moving forward, we have just over two months before our local hospitals are full.

It certainly seems prudent to understand what our options are for obtaining more hospital beds if needed. It turns out that there are many organizations involved in emergency planning for medical response during an emergency, but the specific responsibility for “surge” planning is much harder to pin down. SCC Insight contacted Public Health Seattle-King County, who said that responsibility for coordinating emergency hospital response lies with the Northwest Healthcare Response Network. However, their plans (of which they have many) specify that hospitals are responsible for their own resources and for declaring when they are full, and that surge planning is the responsibility of the Washington State Department of Health. SCC Insight contacted them as well, and they pointed to the state’s Emergency Management Division’s plans. One of those plans is, in fact, specifically for “medical surge” response. In brief, it says that the state would ask for surge support from:

Requests for any of these resources must go through the State Emergency Operations Center (SEOC), and they require an emergency declaration from the Governor. The HHS requests, however, also require a declaration of a public health emergency by the Secretary of Health and Human Services in order to waive a long list of regulations and requirements for setting up and licensing hospitals and/or expanding the capacity of existing ones — which in some circumstances might require a declaration of emergency by the President.

As of right now, Governor Inslee has made his emergency declaration and the HHS Secretary has declared a public health emergency nationwide for COVID-19, which one hopes is sufficient to cover Washington and King County if they request emergency medical surge support.

The bottom line: if King County does need to “surge” its hospital space — and there’s a decent chance it will — that extra capacity will likely be provided by state and federal military units, funded in part by the Department of Health and Human Services. But those resources will all be in heavy demand. The standard procedure for emergency response in the United States is to draw on underutilized resources in other regions; however, in the case of a nationwide pandemic every region will need their local and regional resources. It’s also likely that the state’s military units will be hit with COVID-19 too, and their medical resources may be needed to care for their own personnel.

There has also been some recent speculation that an even more critical resource may be ICU beds for the most critical patients. There aren’t good public sources for the number of ICU beds in King County hospitals, nor are there good estimates for the number of COVID-19 patients that will end up in an ICU unit. Fortunately, hospitals have the capability to reconfigure some of their existing units into ICUs if required.

Looking at planning for a mundane resource such as hospital beds reinforces how important broad COVID-19 testing is for the community to plan properly for its response to the virus. At this point, several weeks into the outbreak, we still don’t know how many people have contracted COVID-19 in King County or how fast it’s spreading — let alone whether interventions to slow its spread are effective. A month from now, we will probably have a much clearer notion. But at that time if it points out a need for additional hospital resources, the race will be on to run the bureaucratic gauntlet to get the approval, resources, siting, construction, and staffing for them. China did it in record time for its COVID-19 response; we may not fare so well.

Nevertheless, it’s also clear why taking strong measures to slow the spread is so important now, to prevent the outbreak from overwhelming the healthcare system. 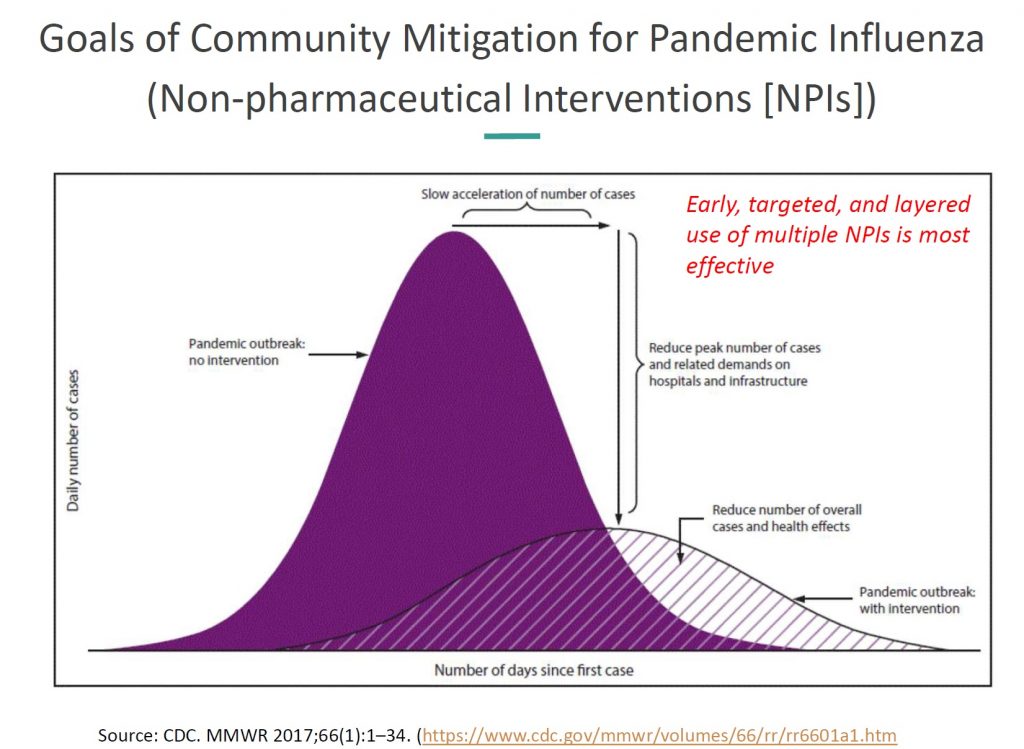