We’re no longer talking about whether to lock down to fight the COVID-19 outbreak; that ship has sailed. Now we’re discussing how long we need to sustain the lockdown, and when we might get to see our friends, co-workers and family again. Five newly-released research and study papers provide important insights into the answer.

The first two papers address head-on the question that President Trump raised last week: is the cure worse than the disease? Will the economic hardship that strict social-distancing measures impose cause more suffering than if we let the COVID-19 outbreak proceed without them?

One of the papers, written by a team at the Federal Reserve, found that pandemics do inflict lasting economic damage to economies, but those communities that implement interventions early and aggressively see that damage mitigated. Further, those communities are also poised for better and faster economic recovery after the pandemic concludes.  You can see in this graph that the U.S. cities that implemented longer interventions during the Spanish Flu epidemic of 1918-1919 (the green dots) had both lower mortality rates and overall stronger employment growth in 1919. 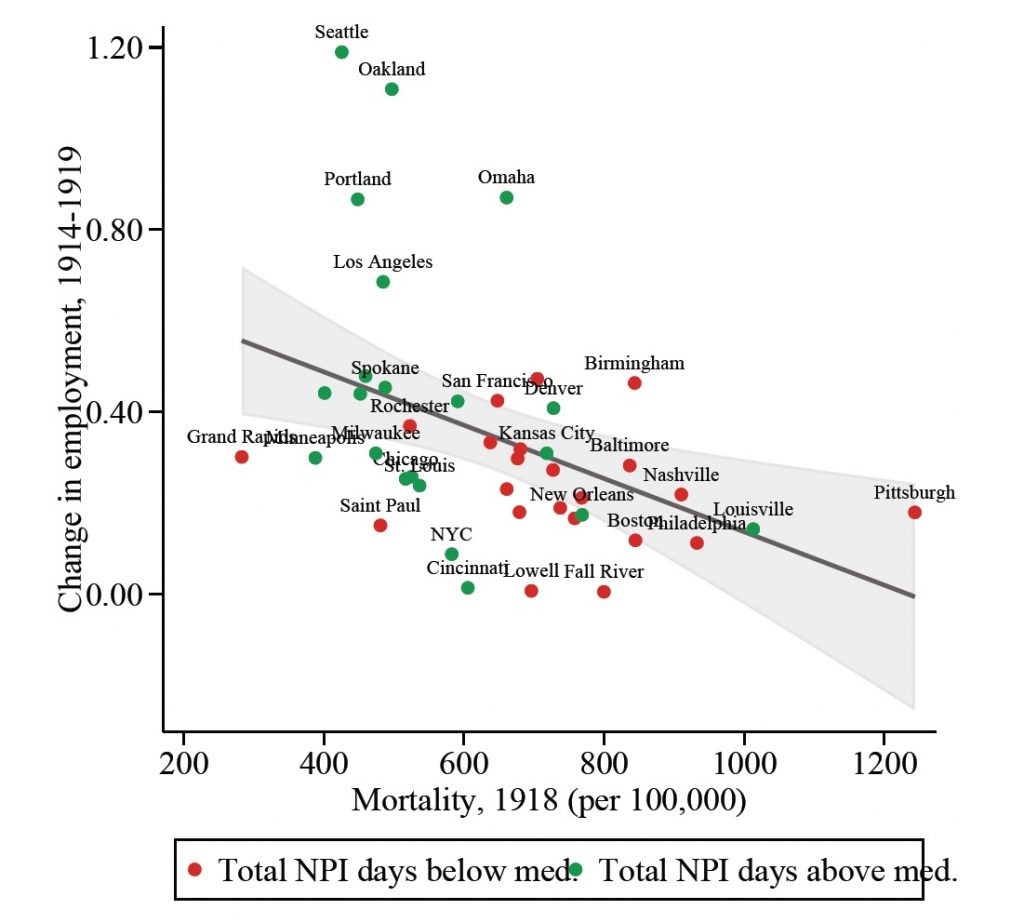 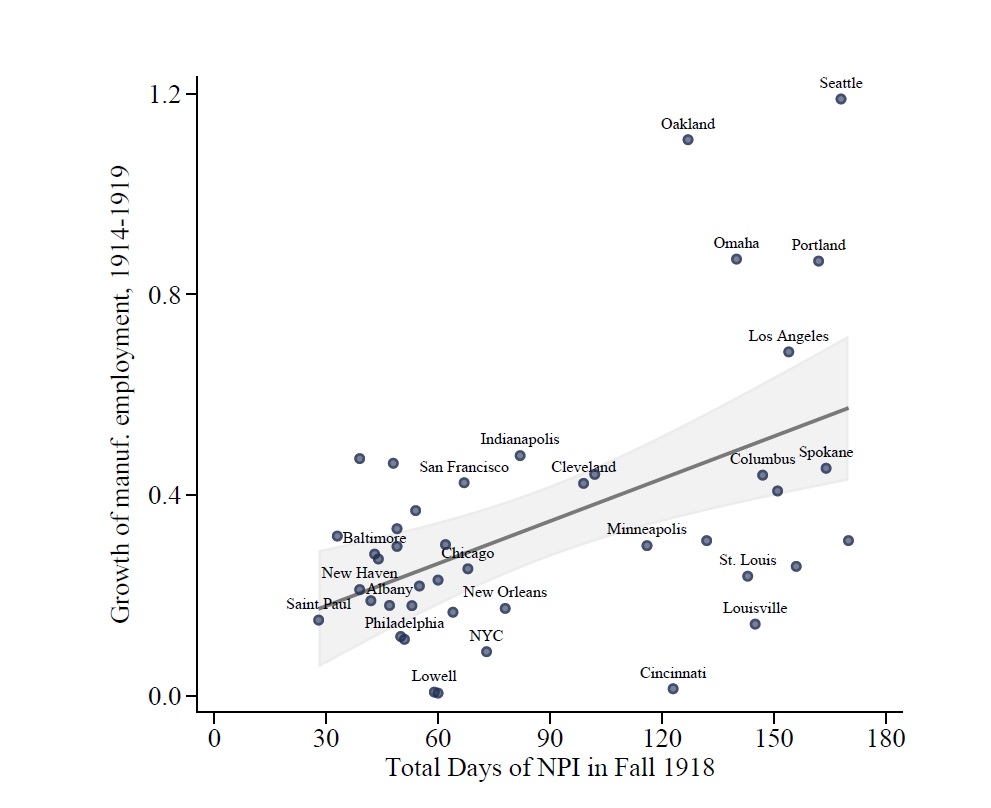 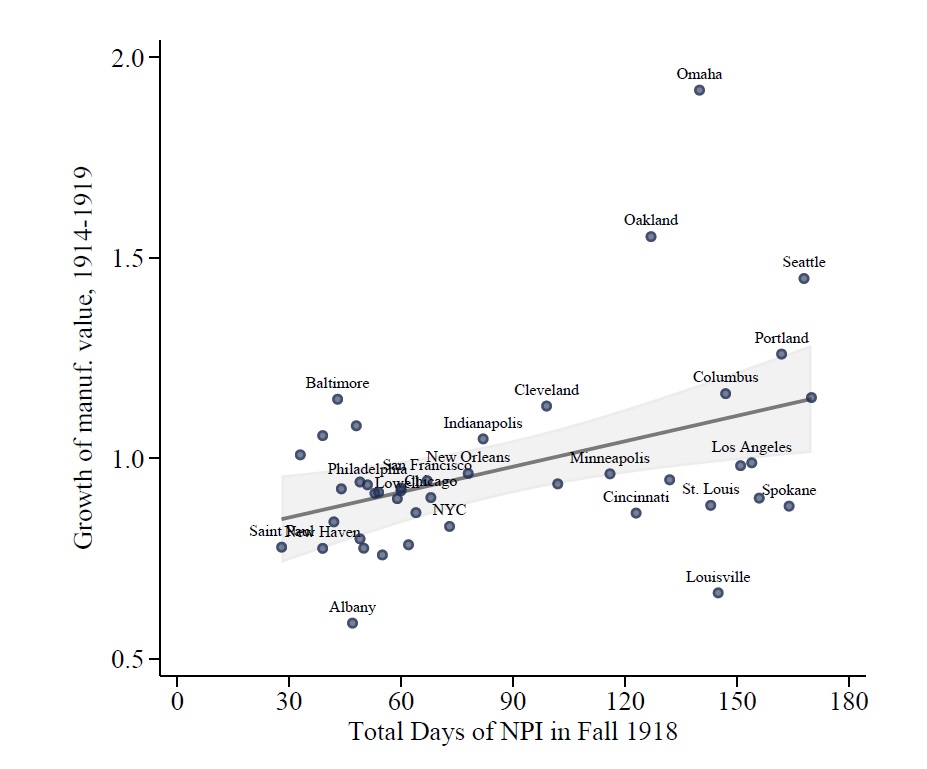 Because the data is so old, the researchers were not able to identify if specific interventions had more or less economic impact.

The second paper looked at pandemics similar to COVID-19 over the last 20 years. It found that GDP fell by 2.57% on average (across 210 countries) in the year the outbreak was declared, and five years later was still 2.96% below the pre-outbreak level. However, it also found that countries with more aggressive government-spending relief programs in the first year of the outbreak felt the downturn less.

That leads us to the next question: how long should the interventions be in place to slow the spread of the disease? A third paper tackles that, by trying to calculate the optimal length. It approaches it from a cold-hearted economist’s perspective, suggesting that the interventions should be in place until the cost to the economy to do so exceeds the benefits the interventions provide. And that math relies heavily on how you value the various benefits and costs. If strictly minimizing the mortality rate is the only measure, then the answer is simple: keep the measures in place for 18 months until we have a vaccine. But economic collapse also causes human suffering — and death — so even just looking at human lives, the calculus is challenging. In this case, however, the economists boil it all down to dollars: medical costs, the costs of lost productivity due to illness, and costs of human lives lost (known as the “value of a statistical life”). And they also take a swing at comparing the economic costs of intervention with the economic costs of letting COVID-19 run its course unimpeded.

They calculate as a baseline that with what we currently know about COVID-19, left entirely unchecked the economic cost of the pandemic would be $13.2 trillion — the vast majority of which is the cost of the lives it would take (estimated at 1.9 million). But with strong enough interventions to bring the reproduction rate of the disease (R) down to 1.0, it drops to $15.8 billion with about 2,300 fatalities. That, of course, is far less than the most recent predictions for U.S. fatalities — currently 100,000 or more. At that level, the cost would be well over $500 billion, but still much less than the cost of leaving it unchecked even in the cold, unfeeling world that economists inhabit.

But coming back to the original question — how long do we leave the interventions in place for — the researchers concluded that as the outbreak wanes the incremental value of sustaining the interventions quickly wanes. They estimated that if R can really be reduced to 1.0 through interventions, they should be sustained for 30 weeks, or about 7 months.

A fourth paper, commissioned by the American Enterprise Institute (and remarkably un-conservative for a publication from that organization), proposes a “roadmap to reopening.” It lays out four phases for the life cycle of the pandemic:

We are, of course, in phase I right now, and it lays out many of the things that we are trying to get competent at now: increasing diagnostic testing capability, keep the healthcare system functioning, increase the supply of PPE. But it adds two more, that are tied to the trigger for when we get to move to phase II:

The trigger for moving from Phase I to Phase II is precisely this ability to quickly test people at large scale and on demand, trace the people they have been in contact with for those who test positive, and isolate and test those contacts. The bad news is that we’re not even close to having it now: we have missed the boat on large-scale testing, and we have no infrastructure for contact tracing at scale (ideally that would leverage a national healthcare system like most developed countries have).

Their solution?  “There’s an app for that.” Well not yet, but they argue for creating a mobile app that during pandemics could automatically track your location and help to quickly identify close contacts who need to be notified if you test positive for the disease.

There are obviously two problems with this. The first is privacy: it’s bad enough that cell phone companies keep location data on us, and that we allow many social-media apps to also gather that information. But allowing a large public-health agency to collect everyone’s location data in order to enable this kind of instant contact-tracing is a scary proposition.  The second issue is equity: not everyone has a mobile device that could run such an app. A public health system that leaves them out perpetuates the existing inequities in health outcomes in our society.

Nevertheless, the last two papers raise a good point: the U.S. doesn’t have what it will take to get out from under draconian social-distancing interventions before a vaccine shows up. Once we get past the peak in this first wave of COVID-19, that will be the next order of business. It would be nice to think that some people could go off and work on that problem now, but by all appearances it’s going to be “all hands on deck” just to get us through the next 6 weeks.

The big takeaways from this recent research: