This morning the Office of Police Accountability released its second batch of closed cases from investigations into alleged SPD officer misconduct during the pat summer’s protests, just over a month after its first round was released.  This batch contains five additional cases, two of which resulted in OPA sustaining charges of misconduct.

One complaint from June 7, in which protesters “positioned their bodies on the ground to prevent bicycle officers from leaving a barricaded area,” accused an officer of using excessive force in attempting to arrest one of the demonstrators. Video evidence submitted by a witness showed that the officer forcibly pushed the demonstrator into the ground, causing head injuries. OPA found that the use of force by the officer was reasonable and necessary, but it was not proportional given that the demonstrator was not physically resisting and was not a physical threat. OPA sustained the complaint. 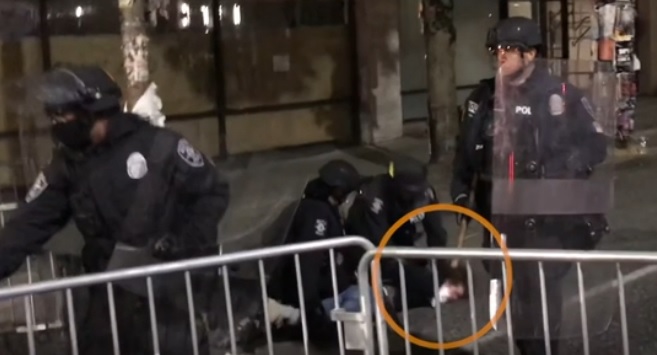 The second case, from the first day of protests on May 29, involved a protester who refused to comply with SPD officers’ direction not to proceed down a street that had been closed to keep additional protesters out of the Chinatown-International District. According to the OPA report, the protester actively evaded police, and he fought back when officers stopped and attempted to place him under arrest. When the protester hit the two officers with a water bottle, the first officer immediately punched the protester twice in rapid succession “to prevent him in engaging in similar conduct.” OPA found his use of force to be reasonable, necessary and proportional. However, the second officer waited a few seconds, then punched the protester six to eight times. OPA found  that to be excessive use of force because he “failed to modulate his force as the threat subsided.”  OPA sustained the charge against the second officer.

The protester continued to resist, and grabbed the second officer’s hand. That officer told him to let go of his hand, and when he did not do so, the first officer used a “knee-strike” to force him to let go. The protester then went to the ground and “turtled” with his hands underneath him to prevent the officers from handcuffing him. The first officer responded with a “cross-face” (a forearm to the face, which some witnesses mistook for a choke-hold). A cross-face is how SPD officers are trained to deal with a suspect who won’t present his or her arms. The cross-face worked, the officers handcuffed the protester, and no additional force was used on him. OPA found the use of the knee-strike and the cross-face to be appropriate.

The third case stems from complaints by a protester that an officer pointed a rifle at her, and that other officers treated her unprofessionally when she tried to talk to them.

Her side of the story, as per the OPA investigative report:

OPA interviewed the Complainant. She stated that she was part of a peaceful protest. She told OPA that “some kid walked past and threw a water bottle” at officers and, as a result, the officers started using CS gas on all of the demonstrators. She noted that, even prior to this occurring and anything “bad” happening, the officers had riot gear and gas masks on. The Complainant recounted that she approached the officers to obtain an explanation of “why are we being tear gassed.” She stated that one of the officers she approached scoffed at her, did not answer her question, and told her to go away. She indicated that another officer pointed what appeared to be a rifle at her. While he did not shoot her with anything, she still felt that this was inappropriate. She said that she was not affected by CS gas during the demonstration even though others were.

After reviewing officers’ body-worn camera footage of the incident, OPA couldn’t confirm that a rifle had been pointed at the protester, but also couldn’t entirely rule it out:

But the video footage provided a very different account of the protesters’ interaction with police officers than the one she gave:

At the time of the interaction, officers had given multiple orders to the crowd to disperse. Objects had been thrown at officers and SPD supervisors authorized the use of less lethal tools to clear the crowd from the vicinity. The Complainant approached officers and was told, among other individuals, to move back. An officer said to the Complainant: “Ma’am…please leave…ma’am stop…leave…please leave for your safety.” She then asked the officers: “Can I please thank you?” After being told to move back another time, she said: “Can I please thank you” and “I just want to thank you for doing your jobs.” At that time an officer – referred to here as Witness Officer #1 (WO#1) replied: “Now leave…you said it, thank you…now go.” In response, the Complainant stated: “Why am I hurting your safety by being here?” Another officer told the Complainant: “Ma’am, there is a dispersal order, you need to leave…it is against the law to remain here…you need to exit.” She told the officer that she could not hear him, and he repeated that she needed to leave the area. She asked why, and the officer again told the Complainant: “It is against the law to be in this area. Please leave.” She asked why it was against the law, and she was told that a dispersal order had been issued. The Complainant then queried, “So we can’t peacefully protest anymore.” WO#1 said no and informed her that the demonstration was now considered a “riot.” The Complainant then walked away.

The Complainant asserted that she attempted to engage officers in a discussion on excessive force used during the demonstrations but that the officers treated her rudely and dismissively. She contended that this was unprofessional.

OPA’s review of the BWV yields a different conclusion. The video indicates that, after a dispersal order had been given and after the Complainant and other demonstrators had been told to move back multiple times, the Complainant approached the officers and tried to speak with them. When she did so, she sarcastically stated that she wanted to thank them for doing their job. She then questioned the legality of the dispersal order and limitations on what she perceived to be her right to peacefully protest. At no point did she reference force that had been used previously at demonstrations or attempt to engage on this issue with the officers. Notably, officers referred to her as “ma’am” and respectfully asked her to move back. It was only after she continually refused to comply that WO#1 directed her to do so with a raised voice.

It was not unreasonable or, for that matter, unprofessional for officers to decline to engage with the Complainant in the midst of a chaotic situation and while trying to move demonstrators back. Even had the Complainant legitimately wanted to have a conversation about force and tactics with the officers, which seems unlikely given her tone and the manner in which she approached the officers, it was simply not appropriate to do so at that time given the ongoing circumstances.

The OPA did not sustain any of the allegations from this complaint.

The fourth case deals with a protester who was arrested during the June 5 protests. She alleged that she was falsely arrested, subjected to biased policing, was not read her Miranda rights, and was improperly transported from a police precinct.

The protester was arrested for crossing a barricade at the East Precinct after an SPD supervisor made an announcement over a PA system instructing demonstrators not to cross the barricade. The OPA report notes that she was the only one who crossed the barricade at that time.

The OPA report strongly suggests that the the woman was having a mental health crisis at the time; I won’t repeat the details here, but if you are so inclined you can read them in the report at the link above. The body-worn camera footage that OPA reviewed contradicts all of her allegations against SPD, so OPA did not sustain any of the charges against the officers. The report also notes that the City Attorney’s Office declined to press charges against her because she was non-violent and appeared to be suffering from a mental-health crisis.

The fifth case includes two allegations at a gate through a barricade where two individuals were protesting: first, that an officer directed a patrol vehicle to drive up behind the two protesters, which caused he vehicle to hit the individuals; further, that the officer found the incident to be funny and made unprofessional, sarcastic comments to gathered protesters.  Second, that in attempting to physically remove the two protesters from blocking the gate, an officer (different from the first one) intentionally shoved one of the protesters and caused her to fall to the ground.

OPA’s review of body-worn video and in-car video found that the first officer did not, in fact, direct the patrol car to drive up to the protesters, but that he did make several sarcastic (but not profane) comments. OPA referred the incident to the officer’s supervisor for “counseling and retraining,” but not for discipline.

OPA’s review of video footage showed that the second officer did not shove the protester, but instead the protester tripped over the shoe of the second protester kneeling next to her, lost her balance, and fell to the ground. 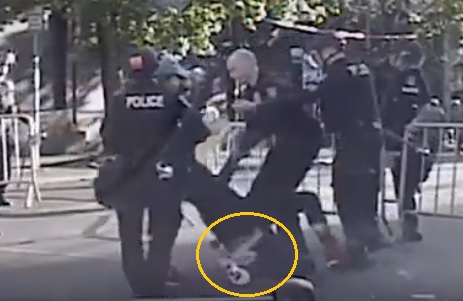 When reviewing the video footage of the incident, OPA discovered that one of the other participating officers at the scene later privately remarked to another officer about one of the protesters, “he’s lucky he’s not going to fucking jail,” when they were in a patrol car driving away. “Given that this comment was made outside of the presence of community members and the fact the profanity was not directed as an insult towards the kneeling male, this was also returned to the chain of command for counseling and retraining,” the OPA report says.

Other than the two referrals to supervisors, no allegations in this complaint were sustained by OPA.

These five incidents make very clear the value of video footage, including both body-worn cameras and in-vehicle cameras, for the benefit of both the police officers and the people they interact with. SPD’s own cameras caught an incident of excessive force, but they also clearly disproved three other allegations. But body-worn and in-vehicle cameras are also not perfect; they did not capture the first incident, and if it weren’t for a witness’s video, the investigation would probably have been closed as “inconclusive.”

On a separate note, a spokesperson for the OPA confirmed that SPD Chief Adrian Diaz has not yet decided on what disciplinary measures, if any, to impose on the officers with sustained complaints from the first batch of OPA findings released last month.