This afternoon, Council member Andrew Lewis announced a new partnership, called “It Takes a Village,” to create an additional 480 units of “tiny homes” in twelve 40-unit villages sited across the city. The effort is intended to help close the gap between the number of people living unsheltered in the city and the number of emergency shelter beds available.

At a press conference today, Lewis ran the numbers: our existing homeless shelters and tiny home villages are at capacity, and there are approximately 3,750 people living unsheltered in Seattle. The city and county have plans to create another 1,145 spaces this year, leaving a gap of about 2,600.

Lewis’s new public-private partnership would build out another 12 “tiny home” villages across the city, with 40 tiny homes in each. It costs approximately $400,000 to $600,000 in capital costs to build out a 40-unit site, including $100,000 for the tiny homes ($2,500 each) and the remainder for preparing the site. In addition, it costs about $800,000 per year to operate a site, which includes case management and wraparound services.

Tiny home villages are currently the best performing form of emergency shelter the city utilizes, with 41% of the occupants exiting to permanent housing.

Lewis envisions the build-out in two phases, with both private and public funds contributing to each.  In phase one during the first half of the year, the city would identify six new sites, while the city and partners would fundraise $3.6 million to pay for the capital buildout costs for the 240 units of tiny homes in those six villages. The City Council has already allocated $4.2 million in the city’s 2021 budget for expansion of tiny home villages, and those funds would cover the operational costs.

For phase two in the second half of 2021, another six sites would be found and another $3.6 million of private donations would be raised to cover capital costs. To cover the operational costs, the City Council might appropriate additional fund or seek state or federal funding. 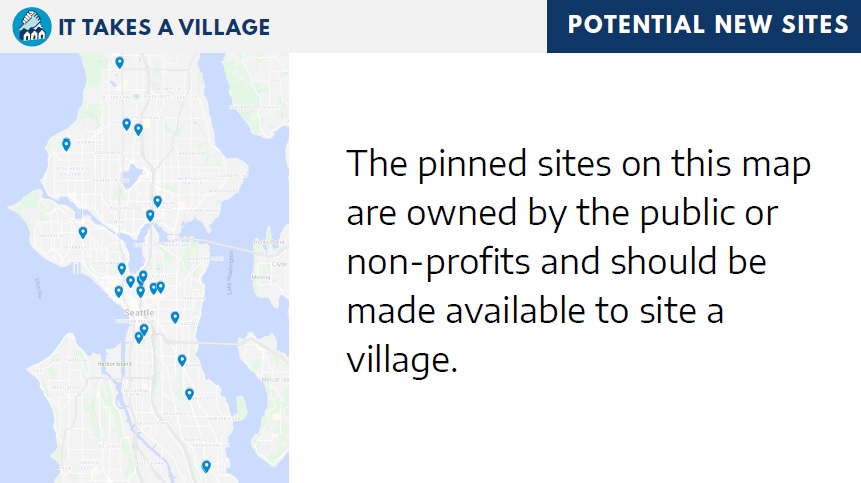 At a press conference today Lewis was joined by several partners in the effort, including Duncan Wloderczak of Onni Dvelopment; Sharon Lee of LIHI, the organization that manages most of the city’s existing tiny home villages; Danah Abarr of the South Lake Union Chamber of Commerce; John Scholes of the Downtown Seattle Association; and several local philanthropists. They all expressed excitement for the new partnership and optimism that the money could be raised from the private sector; in fact, $1.4 million has already been raised.

In response to a question from a journalist, Lewis said that the city is moving forward with the effort now, but once the new regional homeless authority is stood up later this year the effort would likely be transferred over to its control.

More information on the project can be found at the proposal’s web page. Lewis encouraged individuals and organizations that wanted to help to contact him by email at andrew.lewis@seattle.gov, with the subject “It Takes a Village”.