In September of 2019, during the heat of a fierce re-election campaign, Councilmember Kshama Sawant rolled out a proposal for residential rent control in Seattle — despite the fact that it’s clearly prohibited under state law. Today, facing the prospect of a recall election, Sawant trotted it out again. 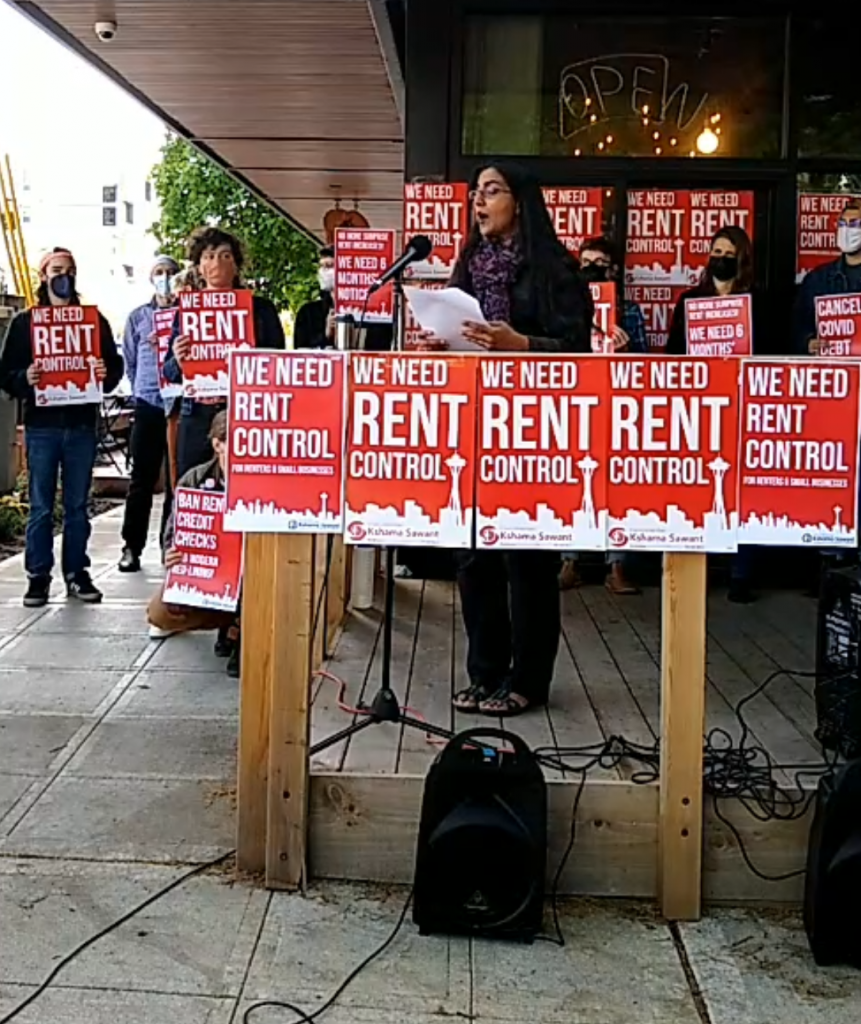 In fact the bill Sawant promoted at a press conference/rally this morning and promised to introduce shortly into the Council’s legislative process, is nearly identical to the 2019 version with only minor edits. Here’s my review of the original bill; the 2021 version has all the same major components, including:

And the bill still has all of the major issues that the original draft did (see my 2019 article for the full list). On top of that, it’s rent control, and there is broad consensus among economists that rent control doesn’t work as advertised and is poor policy.

Sawant also said this morning at her press conference that she is working on three additional bills to be introduced soon:

This morning Sawant once again took aim at capitalism and “big banks and corporate landlords.” She noted that according to ApartmentList.com rents in Seattle increased by 9% from January to April this year — calculating that this represents an annualized rate of 40%.

Technically that’s true, but it also proves once again that we need to fact-check everything Sawant says (and Mayor Durkan, and every other elected official) as she is carefully cherry-picking the time-frame to prop up her argument. Rents did rise 9% in the first three months of 2021; but they dropped 21.8% between March 2020 and January 2021. Sawant wants you to see this: 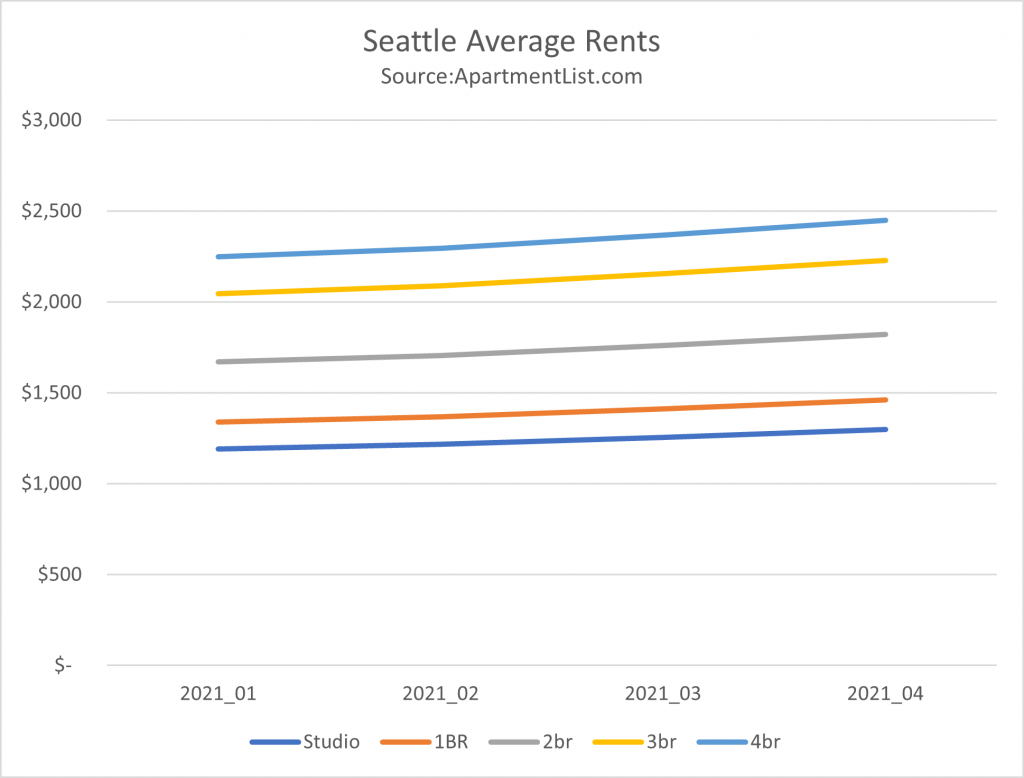 I could equally try to skew your perception by showing you this graph: 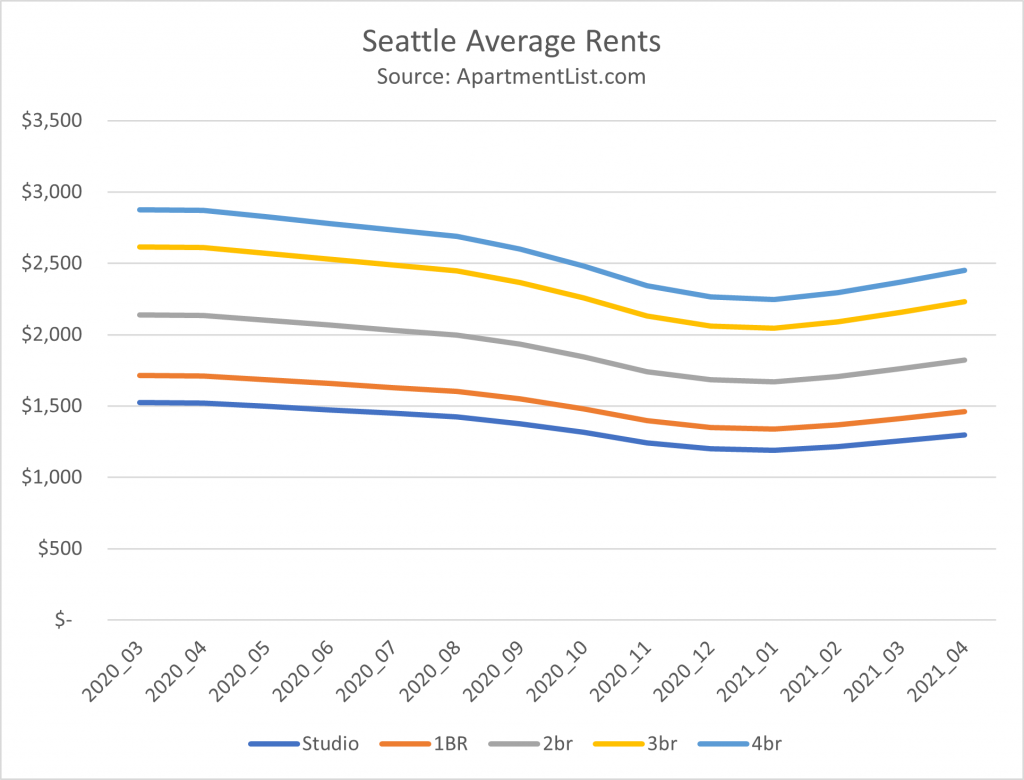 But instead let’s look at the whole picture: all of ApartmentList.com’s data, going back to the beginning of 2017 (and yes, I know there is interesting rent data going back earlier from other sources, but this is Sawant’s chosen data source, sent to me by her communications staff person, so we’re going with them so that there is no debate over whether the source is biased or untrustworthy).

For three years, up until prices crashed in early 2020, rents were flat modulo seasonal variations. Currently they are almost 15% below that level, and Councilmember Sawant believes that now is the time to impose rent control. To be clear, the point of this analysis is not to deny that rents increased for several years after the Great Recession; they did — a lot. But what changed in Seattle starting in 2017 is that a lot of new rental housing started coming online. This data strongly supports the viewpoint of rent control’s critics: the best way to control housing prices is to build more housing. That’s what we’ve been doing here in Seattle for the past few years, and SDCI’s permit data suggests that the pattern will likely continue.

Sawant is also being disingenuous in suggesting that the 9% increase in rents so far this year will continue at that pace. She’s a PhD economist; she knows better. She knows that sharp declines are usually followed by sharp initial recoveries that tail off at or before the original starting point before the decline. That is certainly the “V” shaped recovery that we’re seeing in the United States so far: 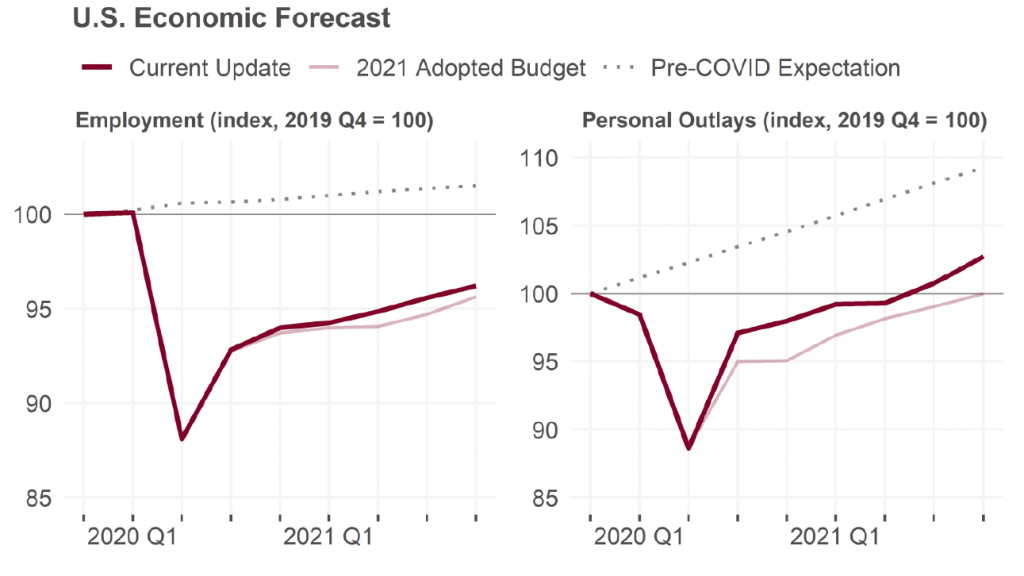 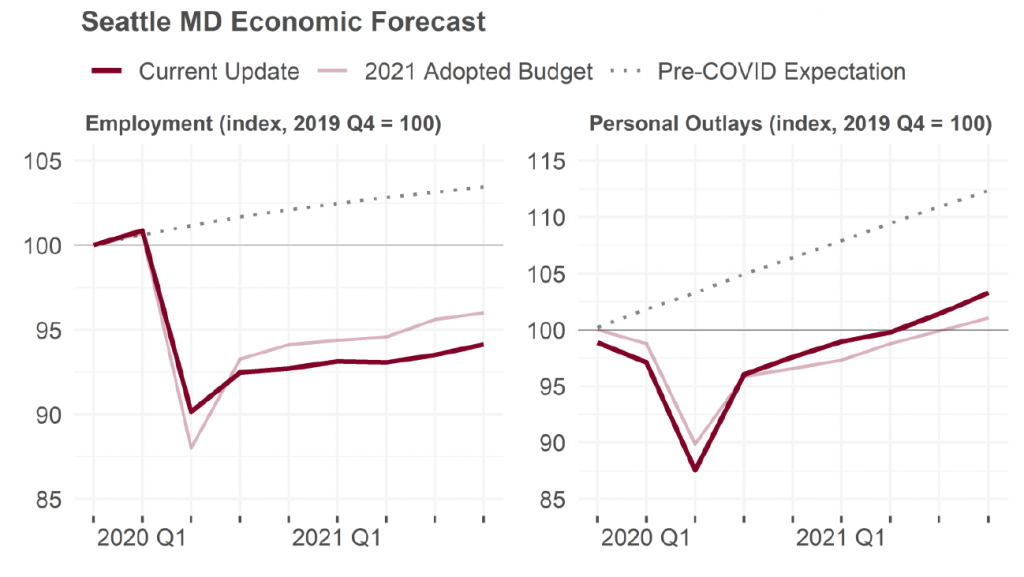 And with consumer spending. 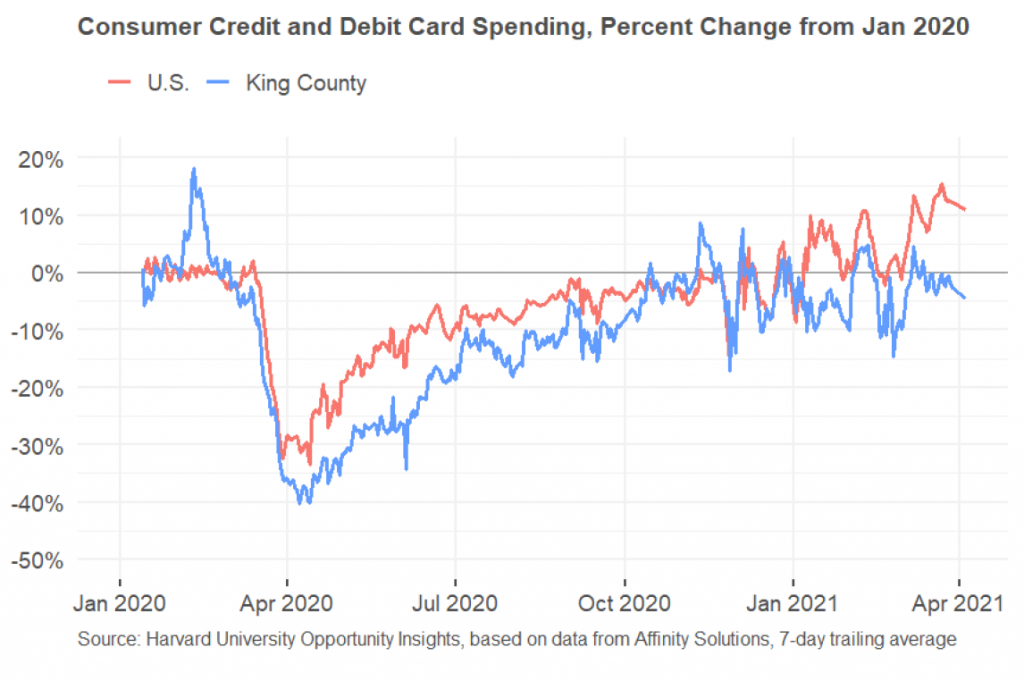 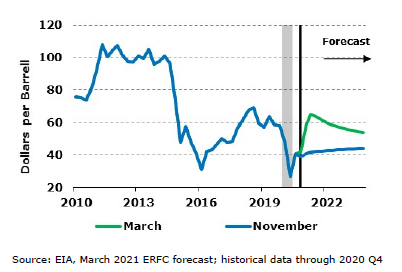 And it works in reverse: sharp spikes often see initial sharp drops, usually at or short of the initial range. For example, Washington’s unemployment rate, which saw a slow recovery from the Great Recession but a quick recovery after a very quick spike last year. It now seems to be leveling off where it started. 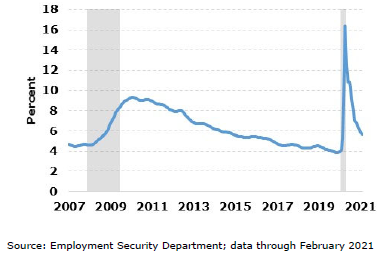 Sawant’s rent control bill, if passed by the City Council, would become effective on the day that the state law prohibiting residential rent control is effectively repealed — or never, if that doesn’t come to pass. She knows that efforts to repeal rent control in Olympia have gone nowhere for several years, and this morning she spoke of her new effort to change that. “Our movement will challenge the political establishment to overturn the current state ban and enact rent control to make Seattle affordable for all.”

What remains to be seen is whether Sawant’s efforts to drape herself in a collection of pie-in-the-sky renters’ rights bills will improve her chances to beat back the recall campaign.