Following up from last month’s announcement by Mayor Durkan’s Equitable Communities Initiative task force of its recommendations for how to invest $30 million in the city’s BIPOC communities, this morning the Mayor’s Office sent to the City Council a more detailed proposal for how the funds would be spent.

The Mayor’s proposal is consistent with the task force’s four “pillars” in their original announcement, though there have been some adjustments to the amount dedicated to each pillar: the original recommendations allocated roughly one-quarter, or $7.5 million to each, but the Mayor’s proposal tweaks that:

A spokesperson for the Mayor’s Office explained the change: “The task force intentionally did not state dollar amounts when they made their announcement, rather said approximately a quarter of the funding would be allocated to each pillar, as they knew there would be changes while working through the implementation process, there were technical revisions as the City and Task Force further developed and refined their proposals.” 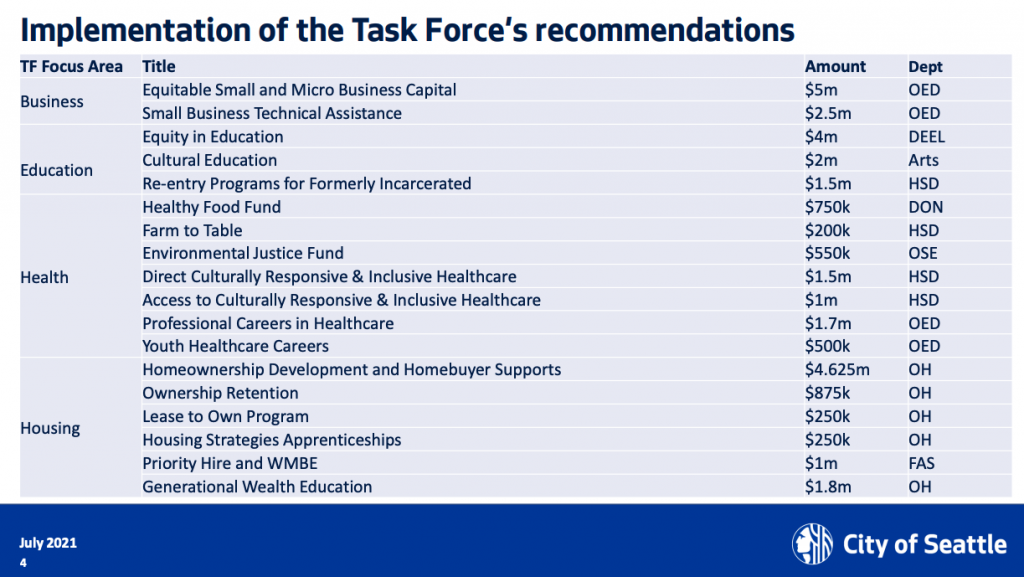 According to the Mayor’s office, most of the funds will be distributed through RFP processes, though some may leverage existing programs such as the city’s Environmental Justice Fund and the Healthy Food Fund that are already primarily working with BIPOC community-led organizations. “The Task Force is really interested in striking a balance between transparency (with established models with proven success that can get money out the door ASAP) and creating opportunities for more participation through low-barrier models,” the Mayor’s spokesperson said.

The press release accompanying the announcement emphasized that the Task Force and city departments have been working on how to get the money out the door before the end of 2021, as well as to make the funding process more accessible to smaller BIPOC-led organizations with less (or no) experience in city-run RFP processes:

Following the announcement of their recommendations, the Task Force began convening weekly with City departments to help inform on the creation of implementation strategies that can be quickly launched so that millions in investments will begin landing in the community by the end of 2021. Task Force members thought deeply about systemic barriers to BIPOC organizations in accessing City funds and worked with the City to define ways to lower barriers that have blocked communities of color in the Requests for Proposals (RFP) process. Some of the strategies include:
• Being intentional about who the investments were targeting by giving priority to organizations led by people of color, and serving communities furthest from equity.
• Providing language access to reduce language barriers for potential applicants.
• Including technical support for prospective applicants and continued support throughout the process.
• Launching a simplified low-barrier RFP specifically targeting small organizations.

When asked for more details on what a “simplified low-barrier RFP” entails, the Mayor’s office provided the following (not particularly detailed nor enlightening) answer:

“Each department will center the needs of community as they design, issue, and review the RFPs to reduce barriers to access and will prioritize or otherwise focus investments on reaching affected communities of color.  The process will not be the same for each RFP, as the circumstances differ for each investment and department. For example, the HSD re-entry RFP will use a low-barrier RFP targeting smaller organizations.”

The announcement also implies that larger BIPOC-led organizations would not be targeted (or perhaps welcome) to apply. When asked for clarification on this point, the Mayor’s spokesperson replied, “Large organizations are not prohibited from applying, but the intent is to prioritize smaller organizations either led by people of color or primarily serving BIPOC communities.” In related news, yesterday the city announced that it is launching a study of equity issues related to its procurement processes that might disadvantage women and minority owned businesses.

Accompanying the proposed spending plan is an ordinance transmitted to the City Council that lifts the proviso on the $30 million set aside for the Equitable Communities Initiative, and reallocates it in pieces to the specific departments that will implement the funding plan. Expect the ordinance to be officially introduced on next Monday’s Introduction and Referral Calendar and referred to the Finance and Housing Committee where it will be taken up on July 20th.