This is the second in a series of articles diving into the 2020 Census and what it reveals about Seattle. The first article looked at the impact on the upcoming City Council redistricting. This one looks at the housing data and how the numbers have changed over the past ten years. Future articles will look at changes in the racial and ethnic makeup of Seattle’s residents, and how each individual Council district has changed over the past ten years.

Let’s start with some relatively good news about housing: we built a lot over the past ten years. Between 2010 and 2020, Seattle’s population grew by 21.1%, and housing unit growth almost kept pace at 19.4%. Obviously more would be better, but compared to most American cities — and most cities in Washington State — that is a phenomenal achievement, especially when one considers that Seattle is by far the largest city in the state. In Everett, housing actually outpaced population growth; in Vancouver (the suburb of Portland, not the one up north) housing was virtually on pace. Bellevue grew its housing base by 17.1%, but still couldn’t keep up with the frightening pace of population growth the city saw (24.1%). Of the larger cities in the state, the laggard was Spokane, where population grew 9.4% but housing only increased by 3.5%. 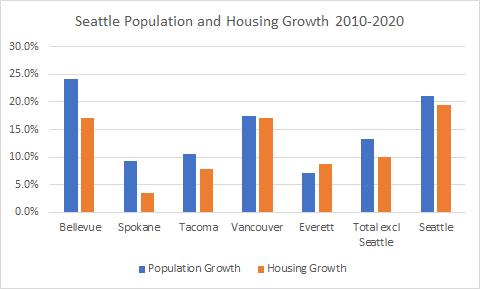 Seattle added almost 60,000 new units over the past decade. Over half of those were concentrated in two Council districts: D3 and D7. Put another way: the big housing growth was in the center of the city, and the farther you move north and south, the less housing was built. While D7 added over 19,000 units, D5 in the north end of the city added only 3,300 — a huge disparity, and worthy of pondering the implications given that by design all seven Council districts began the decade with nearly identical sized populations (though admittedly not equal shares of housing units). 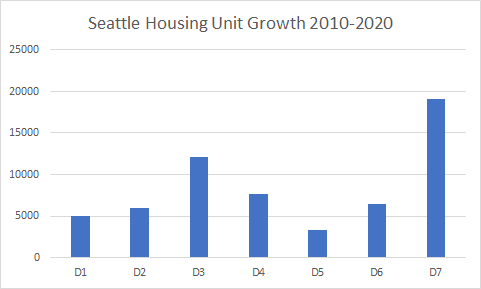 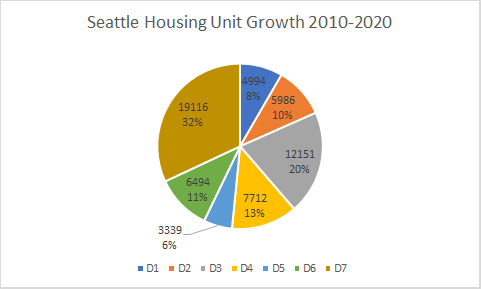 Here’s another look at the before-and-after of Seattle’s housing base: 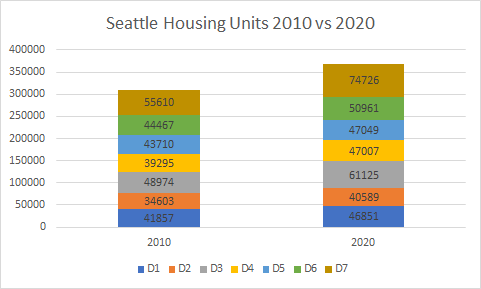 When we compare housing growth to population growth in each of the districts, we can see clearly how differently the past ten years treated various parts of the city. 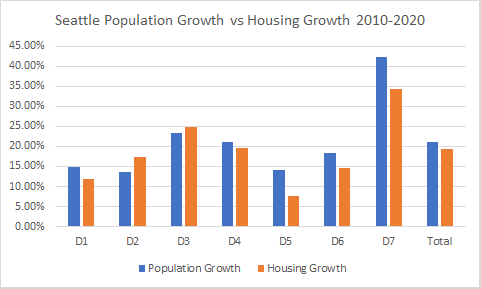 The number of housing units in District 7 grew by 34.4% between 2010 and 2020, but even that astounding rate couldn’t keep up with the 42.4% increase in population. The slowest housing growth was in D5 at 7.6%, well below the 12.8% population growth.  Surprisingly, in two districts — 2 and 3 — housing growth outpaced population growth; in a future article we’ll discuss the issues around whether that’s a good thing or a bad thing and how it ties in with gentrification and economic and cultural displacement.

In 2020 there were about 22,600 vacant units in the city, a drop from about 25,000 ten years earlier. Vacant units are slightly more evenly spread around the city than total housing units, though 46% of them are still within the combination of Districts 3 and 7. 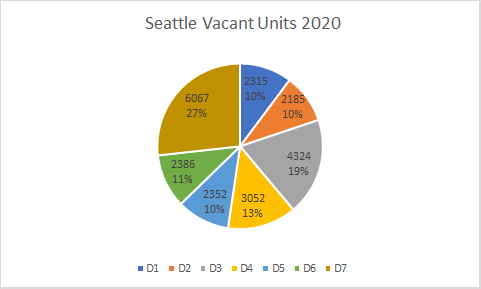 Vacancy rates dropped across the city over the past ten years, with the exception of District 4 where they remained fairly flat (keep in mind that the census is measuring vacancies in all housing units in Seattle, not just rental units). We also can see that vacancy rates track with overall housing growth: highest in the center of the city, lowest in the north and south ends. This is not terribly surprising, for two reasons: first, the vacancy rates are no doubt related at some level to the relative pricing of housing, which is more expensive in the city center. Second, it takes time for newly-built housing units to fill up — developers suggest up to a year for a large apartment or condo building. 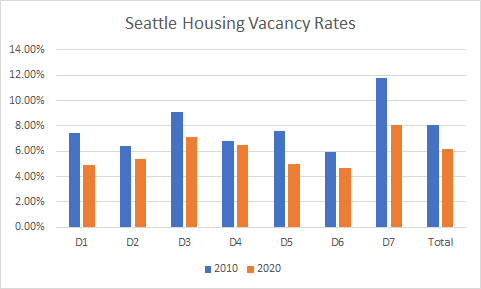 And yet despite all that population and housing unit growth over the past ten years, within each district the number of housing units per person has changed little — a small tick down in D5 and D7, but overall remarkably steady. 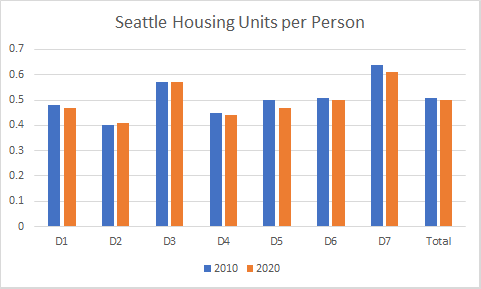 There is, however, still a significant variance across districts, with District 7 50% higher than District 2. It’s a bit of an abstract metric, though, so let’s make it real: the average household size, i.e. the number of people in each occupied unit (leaving out the vacant ones). Once again in retrospect probably not too surprising, household size is largest in D2 (home to many communities of color) and D4 (home to UW), and smallest in D3 and D7, the city center full of young urban professionals. 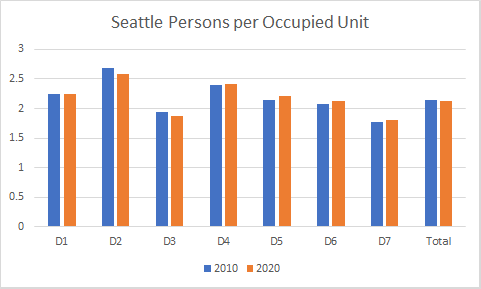 So what does this all mean?  A few observations: