In the last installment of this series on the Mayor’s proposed budget, we present a deep dive on the Seattle Police Department’s budget: a large, complex and controversial topic.

Before we dive into the deep end of the pool, here is some important context on SPD’s budget worth remembering:

The Mayor’s proposed 2022 budget for SPD is $365.4 million, with a position authority of 1,766. The funding is essentially flat from 2021 ($363.0 million); the headcount is a substantial drop from 2021 (2,020 FTEs) representing the transfer out of the 260 positions from the Parking Enforcement unit and the 911 call center, and the addition of six Community Service Officers (plus a few other one-off changes, such as a new video analyst for the OPA).

Even though officer attrition has remained high, the SPD budget does not propose to reduce position authority further; though according to the department its staffing model assumes that 130 positions will go unfilled. Accordingly, it expects approximately $19 million in salary savings for 2022 compared to the original 2021 SPD budget. Combined with the money transferred out for the PEOs and 911 call center, that’s a reduction of about $32 million.

So then, you may be asking, how did the department’s total budget end up flat? It’s a good question, with a multi-part answer. The proposed budget details a number of expense increases for the department, including some accounting changes, inflationary increases for some services like HR and IT that are provided centrally by the city but charged back to departments, and cost of living increases for some personnel benefits like healthcare. Plus, the Mayor’s budget proposes how the $19 million of salary savings should be spent, with $3.65 million going to community-based public safety alternatives and a larger chunk to be spent within SPD on ongoing technology and other projects to improve efficiency. The Mayor is also proposing to spend $1 million on reinstating a hiring bonus program for officers to try to boost recruiting, an appropriation which will no doubt be controversial with the Council.

A year ago, with SPD staffing levels well below its position authority, the City Council reduced the department’s budgeted position authority for 2021 by 140 FTEs to match its actual staffing plan (an act known as “abrogating positions”). Rather than disperse the cuts across divisions within SPD, however, the Council took all 140 positions out of the Patrol division. Since the Council has the final word on the budget, that’s how it was entered into the city’s accounting systems, and one unit in particular, Patrol Operations, ended up with a position authority of -69 on the books. However, Chief Diaz had other plans: he has prioritized maintaining Patrol staffing levels in order to try to meet 911 response time targets, at the cost of headcount in other divisions. But the Mayor’s proposed 2022 budget never revisited SPD’s position authorities in order to distribute the Council’s 140-FTE cut around to reflect reality; the 2022 “budget book” still lists Patrol Operations with a budget authority of -69. Last week the City Budget Office acknowledged the error, and earlier this week it gave SCC Insight updated numbers, revealing important information about how Chief Diaz intends to deploy his employees to bolster Patrol staffing even as he continues to deal with high attrition. The numbers and charts below reflect the corrected figures.

Generally speaking, SPD’s budget growth (in inflation-adjusted dollars) has been on pace with the city’s overall “general fund” budget growth over the past twenty years: sometimes a little higher, sometimes a little lower, a flat period between 2014 and 2018 when the SPD officers were working without a contract, followed by a big spike in 2019 with the new contract and the retroactive raises. Then a big drop last year.

The SPD budget growth has outpaced Seattle’s population growth over the same period, with most of the gains in the 2000’s followed by about an even pace in the 2010’s (again partly explained by the four years without a contract) and then the spike in 2019.

However, SPD’s headcount growth has not kept pace with the city’s population growth.

And just to hammer the point home, here’s a chart of SPD’s budget per employee.

(to be clear, a big part of the spike in 2022 in this chart is because the Parking Enforcement Officers and 911 call center employees were transferred out of the department; they represent 260 employees on the low end of SPD’s pay scale, and their exit from the department left a higher average salary among the remaining employees)

There are four main divisions within the Police Department: operations, patrol, investigations, and administration. The administration division hasn’t been affected much by the past two years’ machinations, but the other three have seen some significant impacts. Looking at headcount shows the overall drop in the past two years (though this is position authority, not butts-in-seats, so it understates the attrition), including the transfers out of the department (the 911 call center and PEOs were in the Operations division). 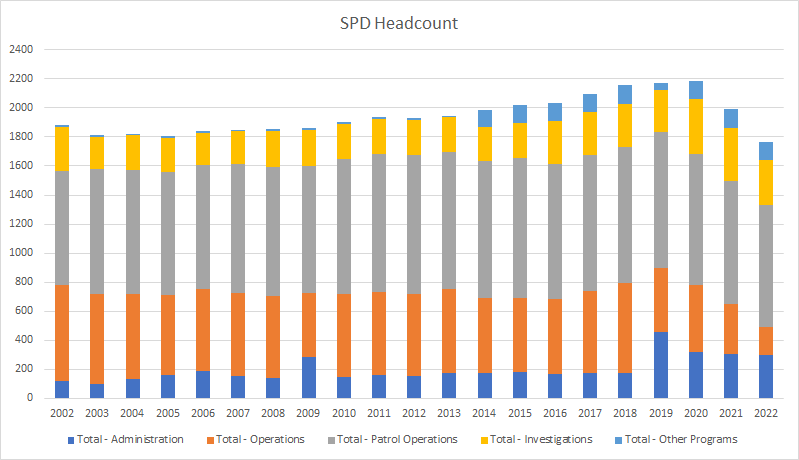 Here’s a better look at what’s happened to each of the divisions, in a format the makes it very easy to spot the intra-department re-orgs:

We can see the patrol division’s heavy cuts (after being flat for a full decade), as well as the efforts by Chief Diaz to prioritize patrol staffing — at the expense of investigations. 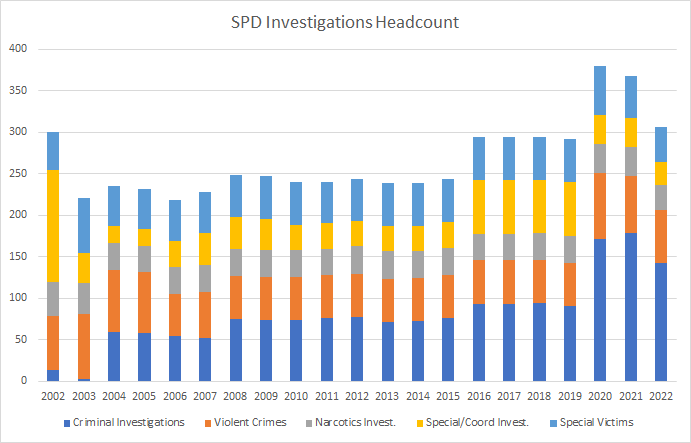 The Investigations division grew substantially — and artificially — in 2020 when a number of smaller specialized investigative units were consolidated together; it didn’t result in a net increase in investigative staff at the time. But that masks the substantial cut to investigative teams since then; it looks on paper like the division is back to its 2019 staffing level, but in truth SPD’s total investigative capacity now is much smaller than it was pe-consolidation.

Despite Diaz’s efforts, he has not been able to sustain patrol staffing in the precincts, which has been in slow decline since 2019. The department had another bout of high attrition during and immediately following the fights over ratifying the SPOG contract in late 2018.

Interestingly, Diaz has managed to grow patrol staffing in only one precinct: the South. Whether that is a good or bad thing depends on your perspective, as South Seattle is one of the areas of the city where SPD has been accused of over-policing — or at least over-policing small crimes.

Looking at the corresponding dollar budgets, we see that the Patrol division is getting more money; the “budget book” doesn’t explain why, but it is likely a combination of the cost-increase factors mentioned above, Diaz moving some headcount over, and overtime to compensate for short-staffing.

Investigations, on the other hand, is seeing severe budget cuts, most notably to the criminal investigations team. The violent crimes unit is also taking a hit, from a high of 79 FTEs in 2020 down to a proposed 64 next year. One might raise an eyebrow at that, given the recent spike in violent crimes across the city. And again, this overestimates the staffing since these are “funding authority” numbers, not filled positions; according to SPD the proposed funding reductions for Investigations mean that 25 positions in the Investigations division (out of 306 total) are without funding.

On Friday when the City Council has its “issue identification” discussion for SPD, here are several topics they will likely focus on:

UPDATE: the Council’s “issue identification” memo on SPD is here.