Last Friday afternoon the Seattle Police Department released the final version of the long-awaited “Berkshire report” on police staffing. It’s 136 pages, stuffed with tables of data — most of which is uninteresting. But with some digging there are nuggets of insight to be found.

First, it’s worth noting that the report is very late; it was originally expected last summer. SPD and the Mayor have been very vague about the reasons for the long delay, with rumors flying (confirmed by police chief O’Toole) for months that an earlier draft had a much higher recommendation for additional staffing and it was sent back to revise the number down (O’Toole says it was a miscalculation).  The City Council, for their part, have been holding back additional funds for police staffing until the report was released. Council member Gonzalez’s committee is holding a hearing on it tomorrow, which one may assume is a first step to releasing the funds.

Second, releasing it late on a Friday afternoon, with little fanfare, is also reason for suspicion: that’s a tactic used when you want to slip something out so that it doesn’t attract attention — or so that it will be “old news” by Monday when people start reading the news again.

Third: the cover letter from Berkshire at the front of the report is dated February 24th. So after receiving it, SPD and the Mayor sat on it for three and a half weeks before releasing it.

So it’s fair to say that SPD has messed up pretty much every aspect of delivering this report so far.

The main part of the report is a thorough dissection of the different organs of the police department, analyzing how well each is meeting its intended needs, proposing staffing changes, and then rolling it all up into a bottom line number. In Doctor Who, they’d call this “the long way round.” It’s worth asking why they took the most painstaking approach to developing a staffing recommendation, and fortunately the answer is in Appendix A (if we look hard enough).

Appendix A is their compendium of comparative data with other US cities. If you wanted to identify other cities similar to Seattle in order to see how they staff their police departments, you’d look at these stats: population, land area, median family income, percent living below poverty levels, and percent whose primary language is other than English. Unfortunately, when you look at those stats, you find that there is no comparable city: 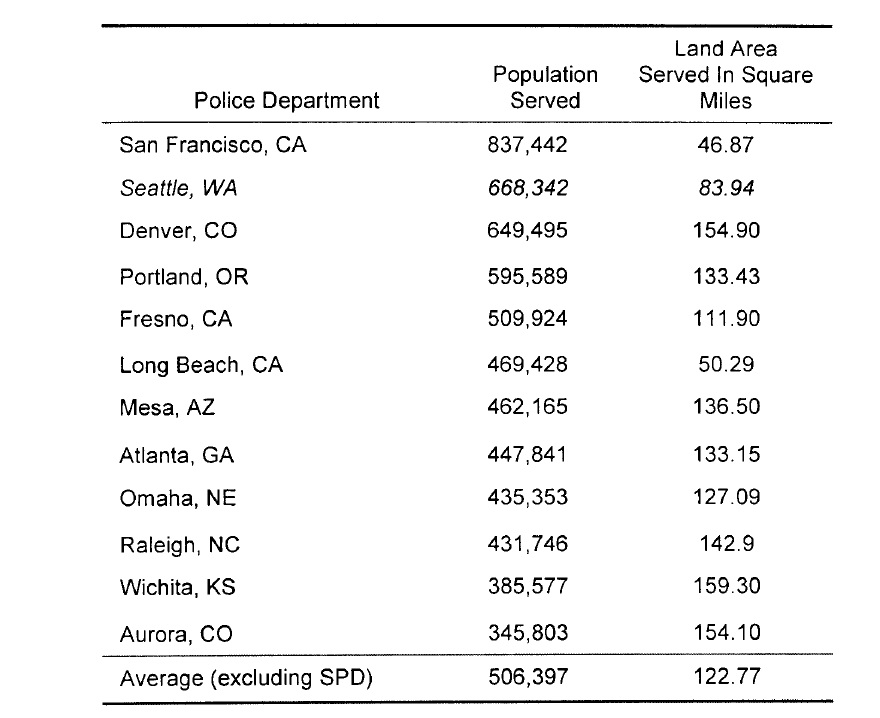 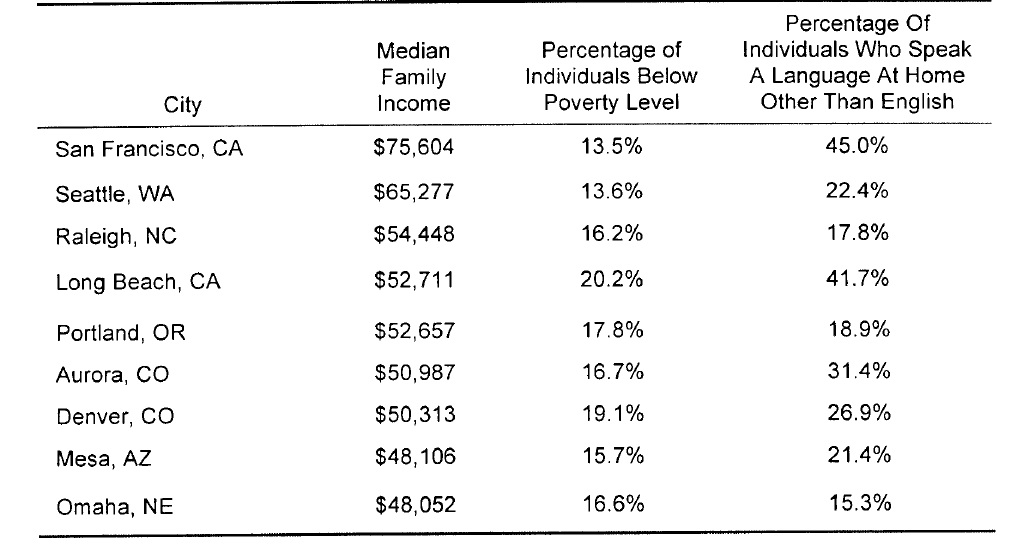 San Francisco has more people, but compressed into a significantly smaller space. Denver is the opposite: slightly smaller but in an area almost twice the size of Seattle.  The other stats are equally unhelpful: 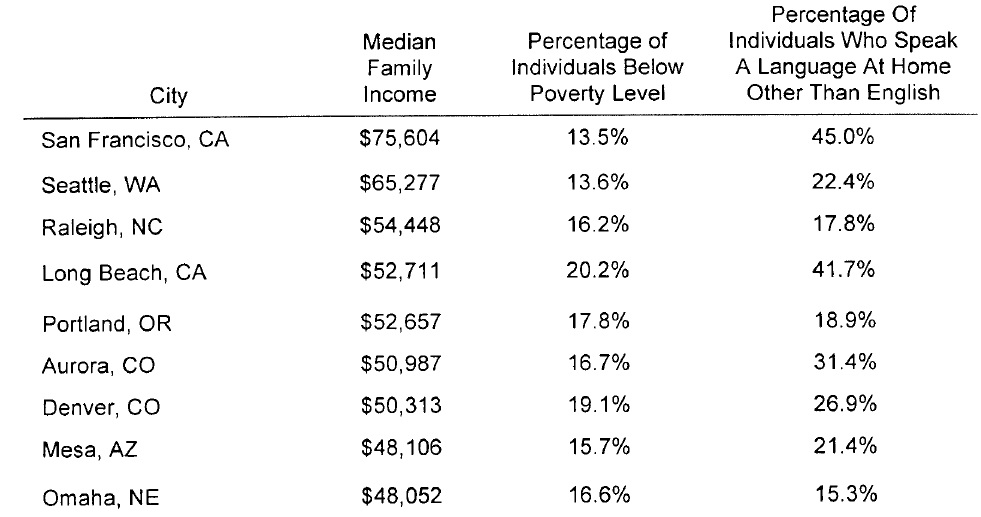 So much for the shortcut of just looking at the most similar city; there really is none.  But that doesn’t mean that we can’t look at statistics related to those other police departments and see some clues about what SPD is doing right – and wrong.

When we look at police budget, we see a lot of money going in. 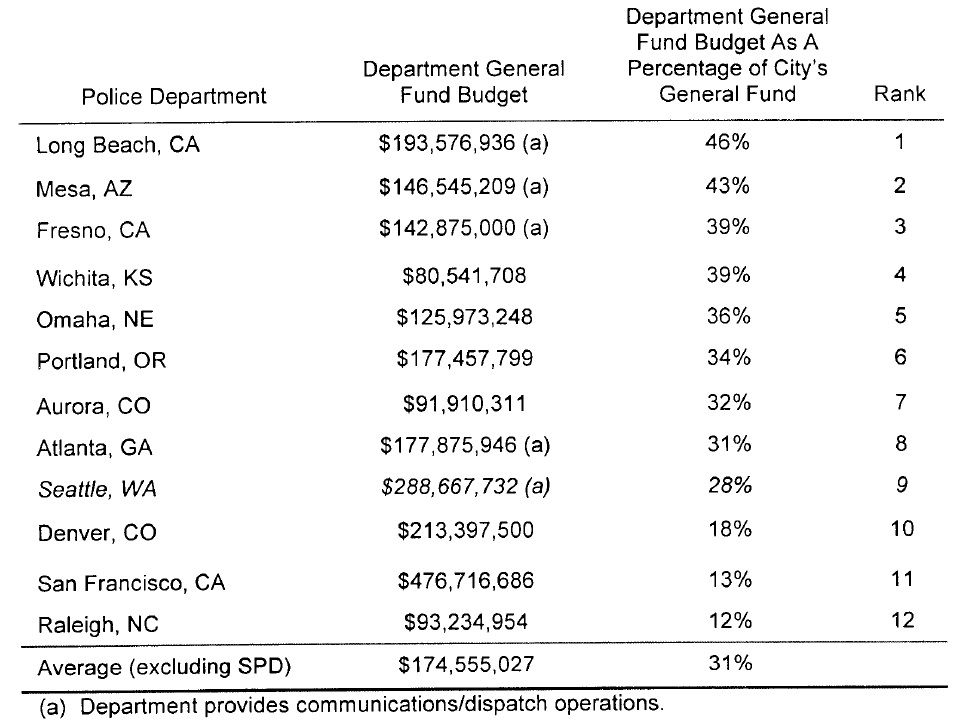 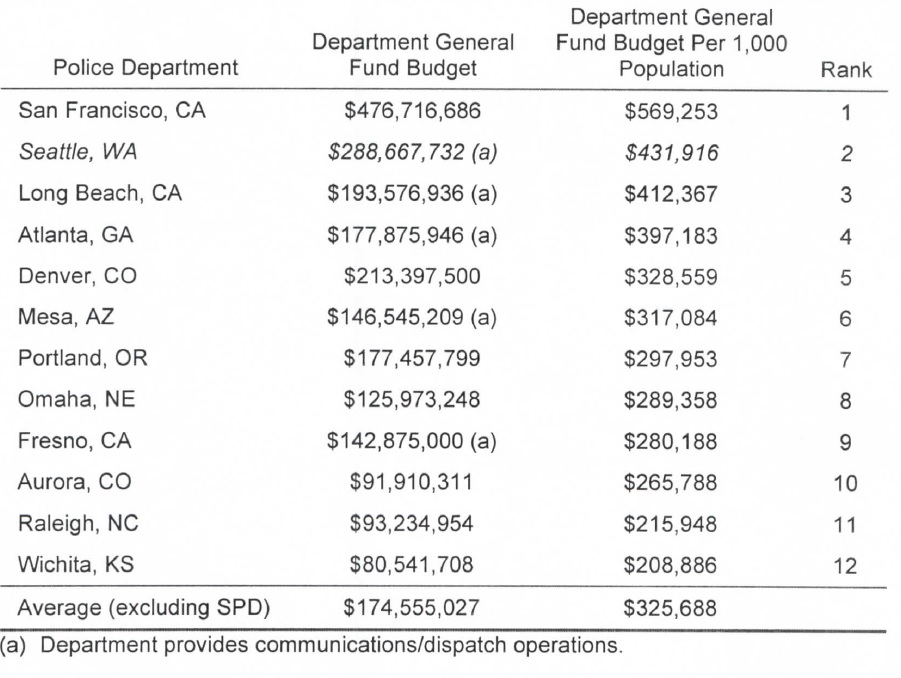 San Francisco pours a ton of money into its police force, but benefits from the economy of scale of a large tax base. Seattle is not quite so spendy in absolute dollars but spends a lot relative to population size (a factor of the larger area, among other factors). We can look at police staffing too: 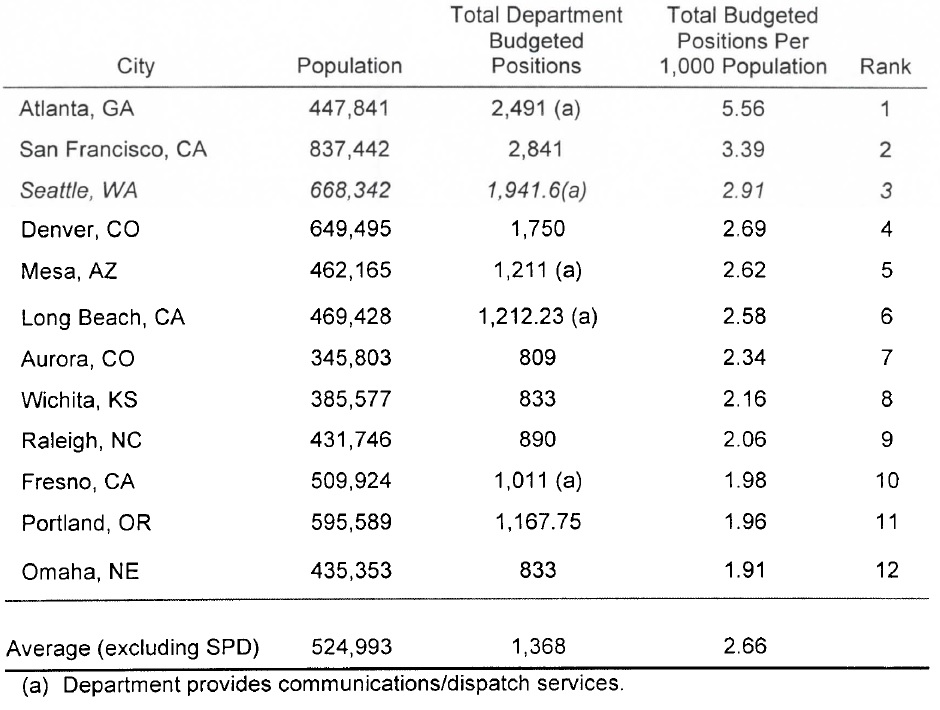 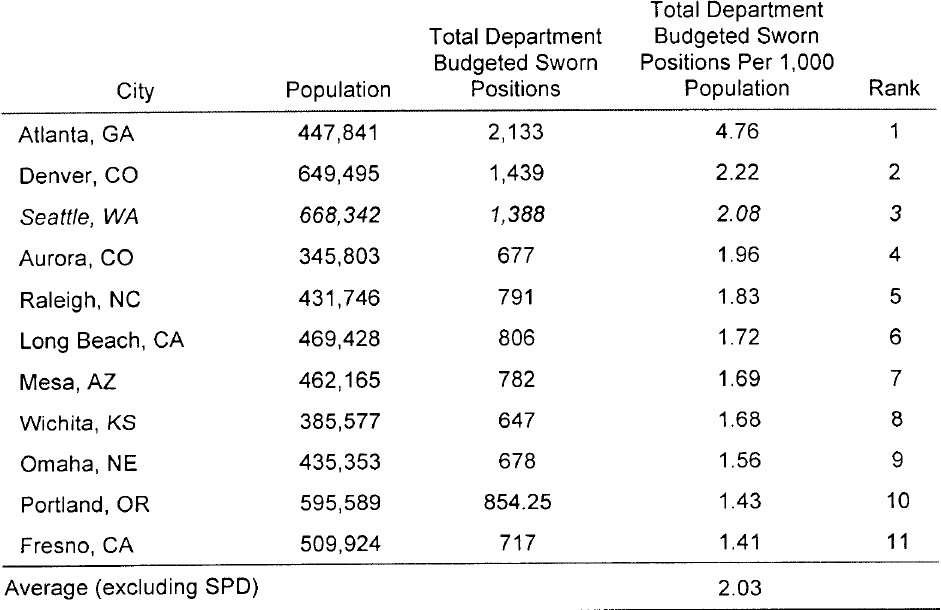 As far as sworn police officers, Seattle’s staffing level is not an outlier for the city’s population size. Add in civilian police positions, and it looks about the same: neither high nor low.  There are pages and pages of additional comparisons in the report, most of which show no particular pattern across cities.  But two are worth looking at: response times, and crime rates. First response times: 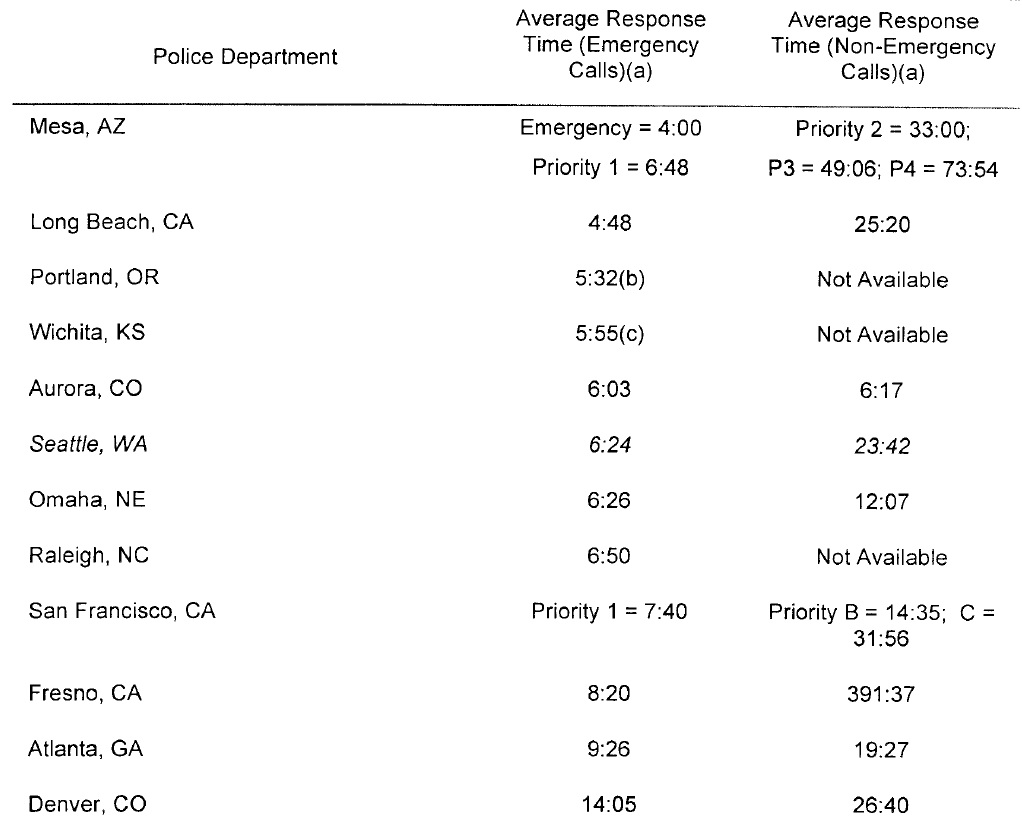 Seattle seems to fare OK on emergency calls compared to other cities — at least on average across the city. We’ll come back to this. Not great on lower-priority calls, but hey, at least we’re not Fresno. 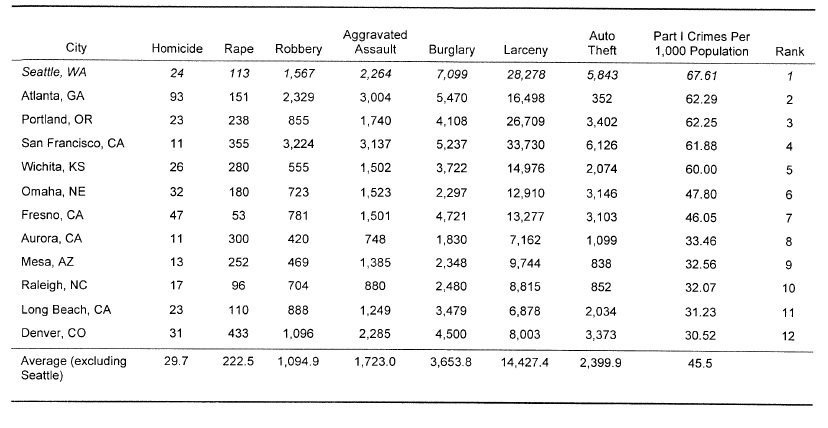 Robbery, burglary, larceny, and auto theft numbers are all very high. Burglary and auto theft, in particular, are off the charts. On the good side, homicide and rape numbers are well below average, particularly adjusting for relative size of the cities. Behind those numbers are low “clearance rates” for those particular crimes, compared to other cities (in other words, the SPD is not adequately staffed to deal with the level of crime being seen:

The response time numbers deserve a closer look. For starters, it turns out that Berkshire was working with dirty data; SPD cleaned up the data set last month and released an updated view of priority 1 response times, broken out for each police precinct: 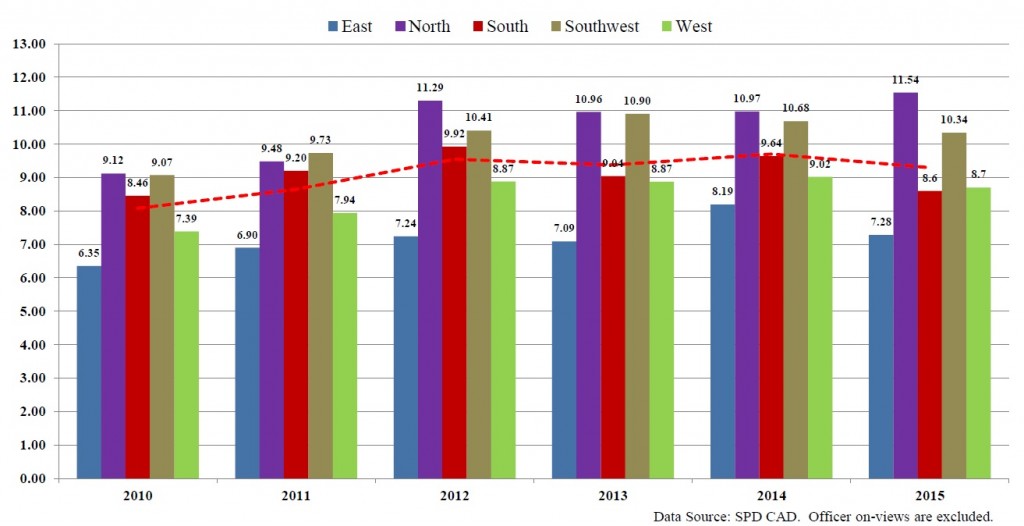 Yup, they are significantly worse than the 6:24 time quoted above. But even more interestingly, they are very different across the five precincts. As a reminder, here’s the precinct map: 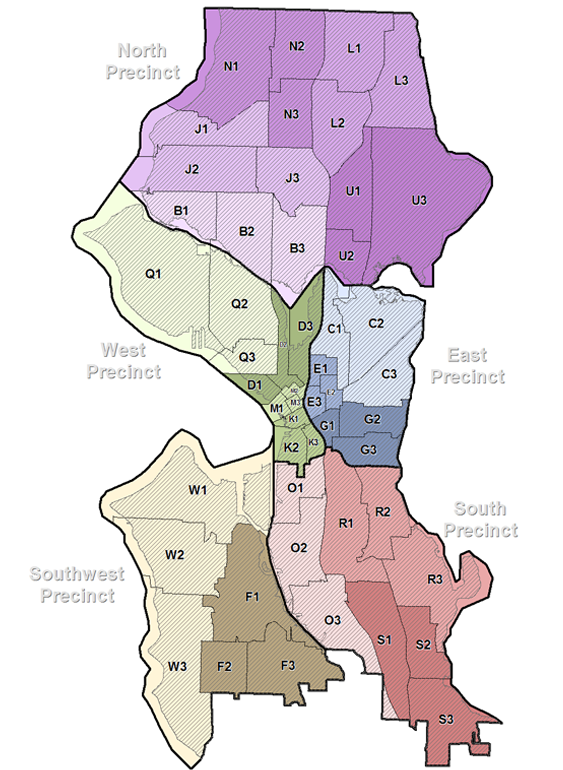 The north precinct, which has the worst response times, is the largest precinct by a significant margin. It also has a larger share of the city’s population than other districts. Even looking at Berkshire’s data split out by precinct shows that response times vary significantly — and that the North precinct is not treated well especially when you look at lower-priority calls. The Southwest precinct also looks pretty bad for priority-1 calls. Many believe that “average time” is not a terribly useful metric for setting response time goals, and prefer a goal set around ensuring that 90% of calls have response times under a certain threshold. The second table below shows what the current response time is for the 90th percentile (and it’s pretty shocking): 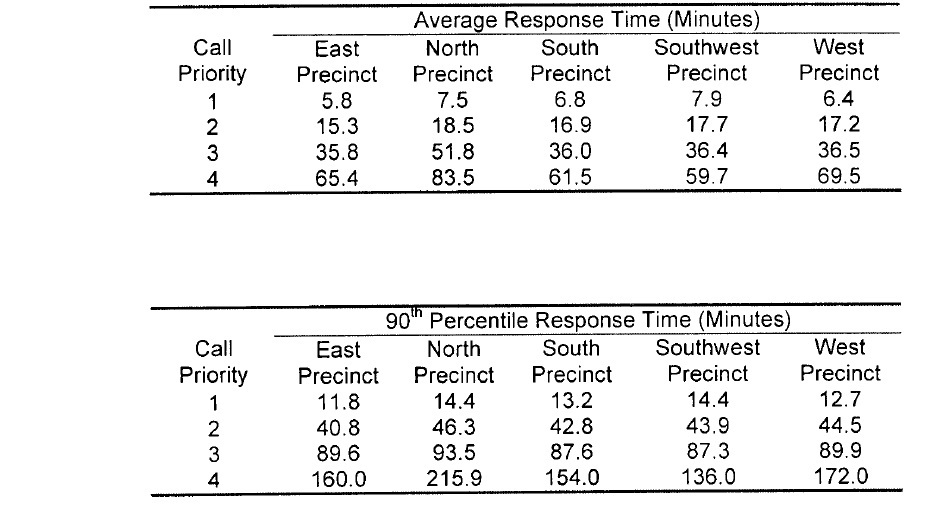 It turns out that it’s not attributable to traffic; the data says that the roads in North precinct are just as fast to travel as other precincts. 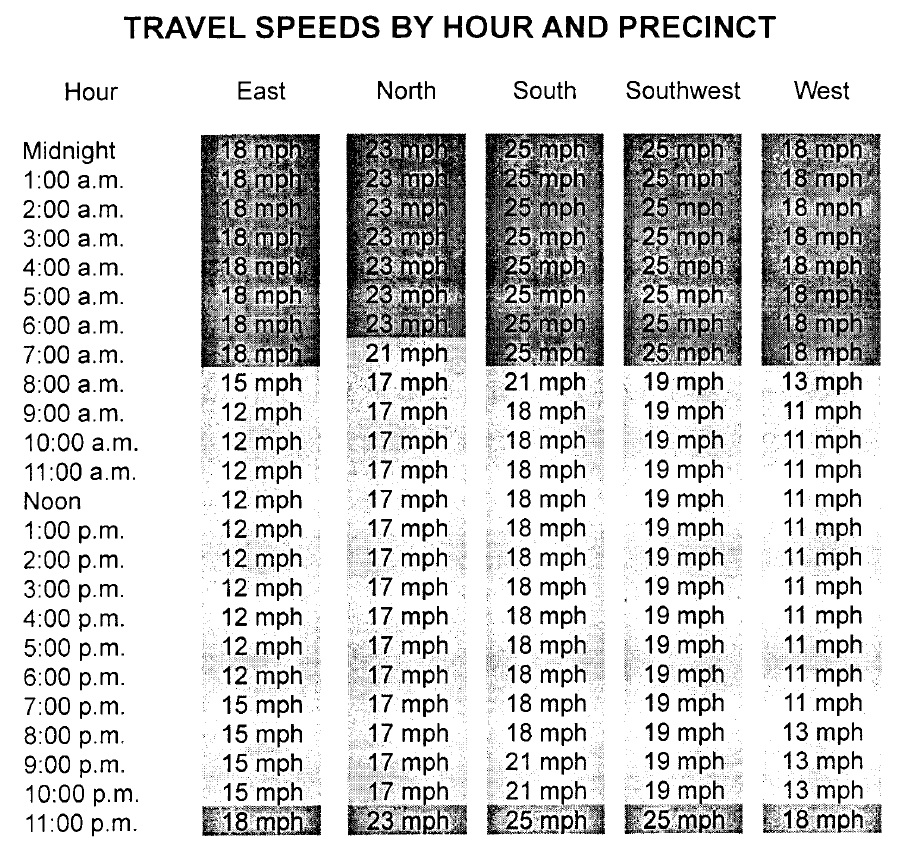 So the slower speeds are most likely police officers needing to travel farther to respond; in other words, either there are too few police officers in the North precinct, or they are poorly distributed within the precinct. There is certainly demand for police response there, proportional to the larger size of the district, so there ought to be sufficient officers stationed there:

We can do a similar analysis for each of the four other precincts; and in fact Berkshire did just that.

So what have we learned on our journey through all this data?

So we know some things that need to be adjusted.

That’s actually the hard work; the rest of the analysis turns out to be fairly straightforward math. Berkshire built models of the actual demand and what adequate staffing would look like. They applied some principles of relative investment in “responsive” vs. “proactive” police staffing, including where to staff up additional positions to address the particular crimes that have abnormally high rates and re-balancing across districts to achieve acceptable response times.

They looked at two models for staffing: one where nearly all positions are filled by sworn officers, and another where some are filled by civilians trained for specific work (think CSI, though there are many different jobs like this in a police force). They also made small tweaks in some of the specialty forces such as SWAT and the bomb squad. In the end, their two models resulted in the following recommendations: 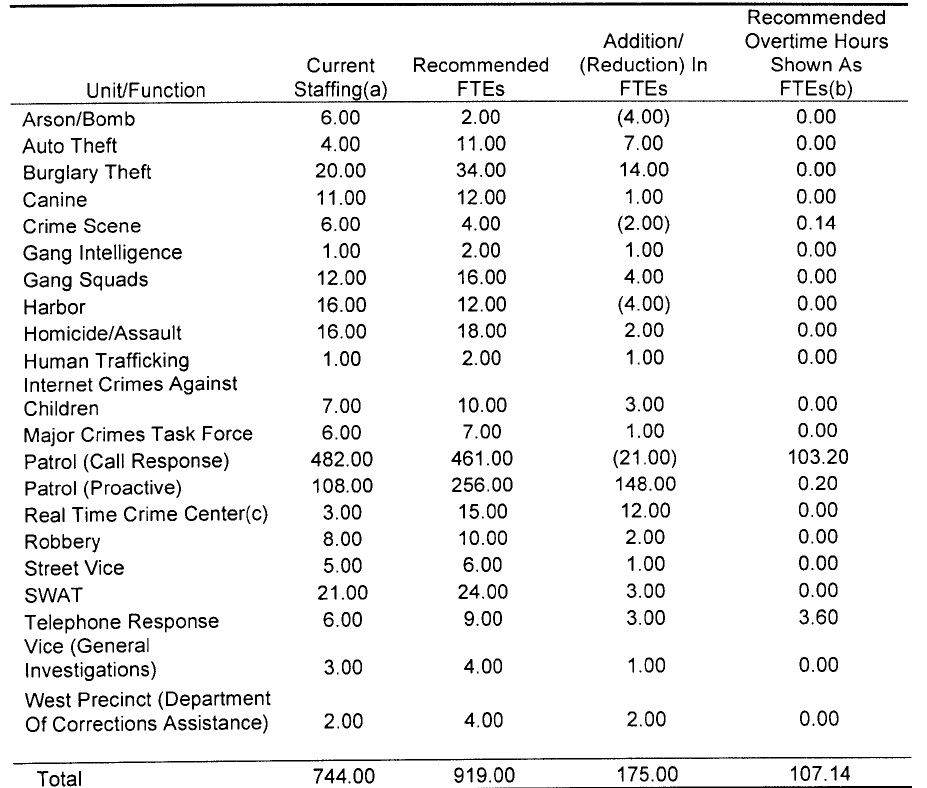 Aditional staffing devoted to specific types of crime is rolled into “Patrol (Proactive)” in the above table.

Regardless of whether they make some of the positions civilians or sworn officers, the bottom line is the same: SPD needs to add 175 positions. That’s pretty close to what the Mayor promised to do in his State of the City address earlier this year, though he promised to add 100 last year and didn’t make much progress on that. Unfortunately, the state police academy is a victim of the budget battle in Olympia, so the pipeline of sworn officers is at risk. Even without that, the option to fill some positions with civilians might speed up the process of SPD staffing up.

There are no big gaping holes in the study, and it’s likely that the response will mostly be poking at pet causes. For instance, the police officers guild will likely object to making some jobs eligible for civilian hiring, and the Port of Seattle might object to reducing the harbor patrol. The Council’s central staff has some very capable data wonks who might quibble with some formulas as well. But I suspect that much of the conversation will be gauging SPD’s level of agreement with the recommendations, and Council members trying to extract reassurances that things will get better in their districts if the plan gets fully funded.

On that note, there still needs to be further analysis on how the recommendation matches up to the existing SPD budget, including the amount not yet released by the Council.

So the good news is that the report seems like a good first approximation for a plan, and the political process it will be subjected to probably won’t screw it up too much. It took me several days and several reads through to make sense of it all, and it’s doubtful that any of the Council members will have had either the time or the inclination to do so themselves. So tomorrow morning when the Council gets briefed, I would assume the conversation will have a little bit of poking at details to ensure it’s solid and reliable, but most of the interesting conversation will be about next steps for staffing up SPD.