This morning the Planning, Land Use and Zoning Committee heard a presentation on some proposed changes to the city’s design review process for construction projects, and while Committee chair Rob Johnson likes many of the ideas presented, he stated his preference to wait until next summer to formally take up any revisions.Johnson’s logic behind that is fairly straightforward: over the next year the city will be working through a review of the comprehensive plan as well as land use changes in urban villages, and he would rather see the design review process reflect the development priorities that emerge from those discussions rather than changing it now as a reflection of today’s development. If he has his way, they would take up changes to the design review process in earnest mid-2017.

Council members O’Brien, Herbold and Gonzalez had other ideas, though, and are hoping to see a smaller set of changes made in the short term that are responsive to the complaints they hear from constituents. O’Brien neatly summarized the pain he’s hearing from both developers and neighbors: he said that developers tell him the process has cost and uncertainty, doesn’t result in better projects, and is largely just a waste of time. Neighbors tell him that it’s a lot of work to go through the process, and at the end of the day they are still frustrated because they don’t feel their concerns are actually addressed.

They set out the goals for design review as they see them: 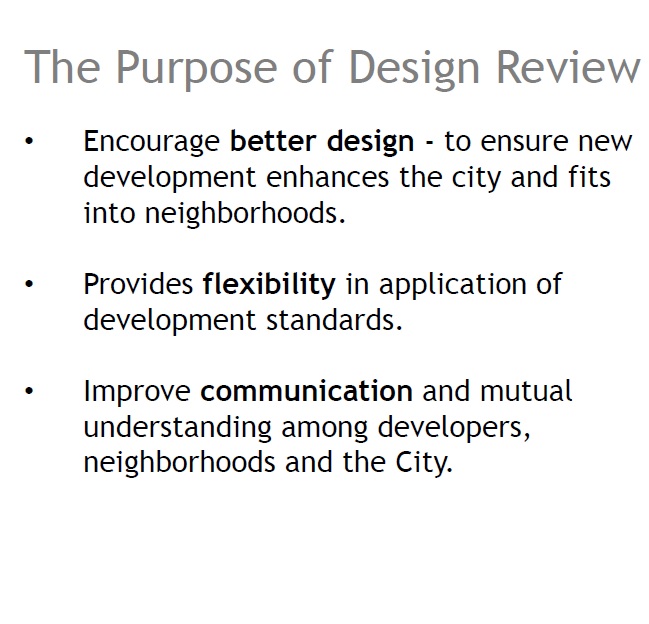 In the course of developing recommendations for change, they did extensive outreach to stakeholders: 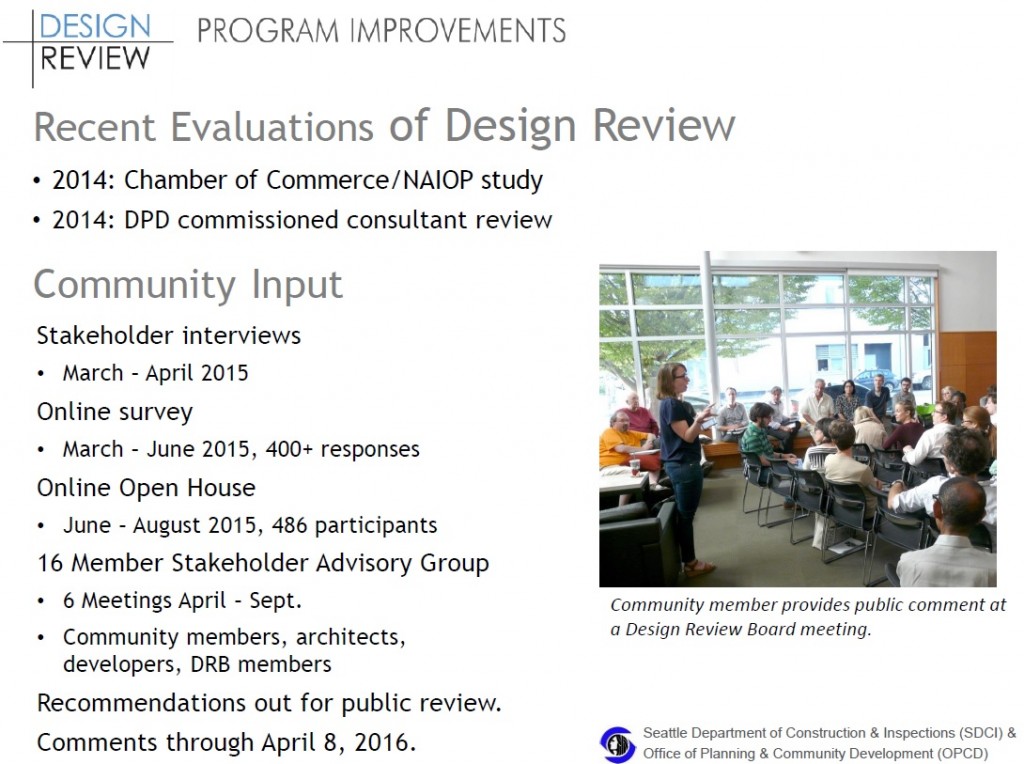 And out of that came some specific themes:

There is an inherent tension in those themes, as Council member O’Brien pointed out, reflecting the different stakeholders’ concerns: neighbors want more input and influence, and developers want a faster and more predictable process. But there are other interesting aspects of the feedback as well, such as the desire to use online tools; the last significant update to the process was in 1994, effectively predating the Internet. It’s certainly worth thinking about how the design review process and community input can be improved using current technologies.

The city staff made five recommendations for how to improve the process:

They want to require, whenever possible, developers to engage with the community before submitting a request for a building permit (which kicks off the design review process). They also want to change the thresholds that guide the level of review a project requires, rebalancing when city staff can do a streamlined administrative review versus when it need to go in front of a design review board. 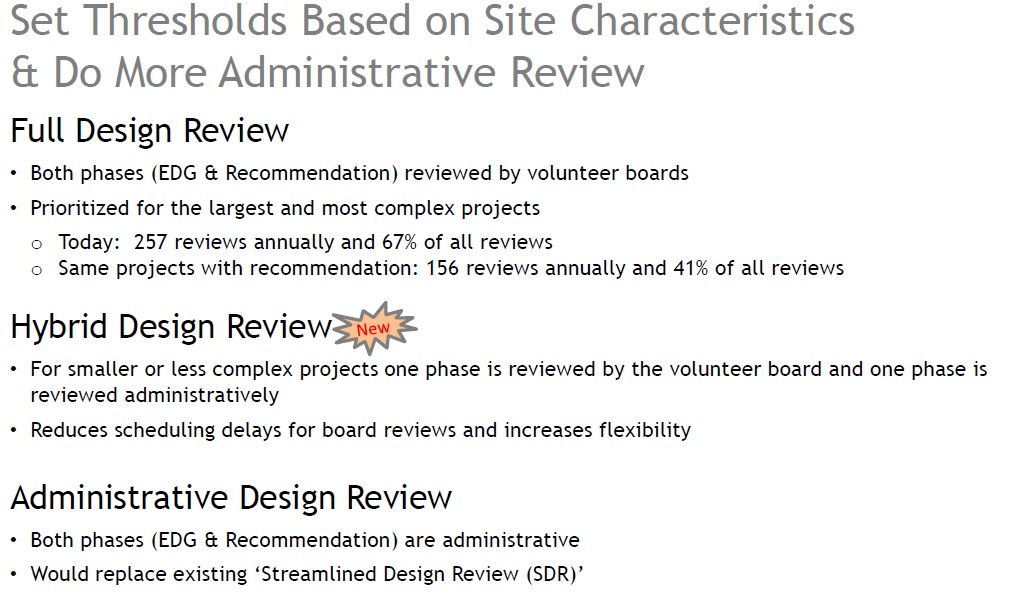 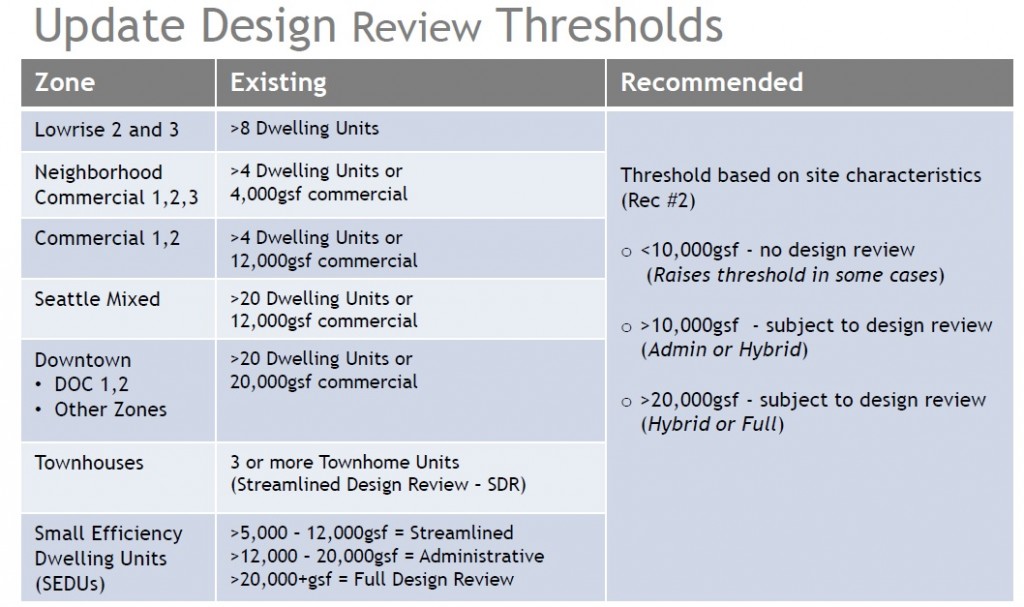 In some cases this reduces formal feedback from community members (sitting on review boards); the city’s hope is that it would relieve those boards (some of which are overloaded and have a long backlog) from wasting time reviewing trivial applications so they can focus on the more complex and substantial ones.

Before the presentation, several community members from Wallingford (O’Brien’s district) used the public comment session to voice their objections to the changes, fearing the loss of community feedback and control over the process. A couple of the speakers even brought in their own horror stories of development projects build next door to their houses.  One speaker did make an excellent suggestion, which was that one of the thresholds as to whether a project must go through a full design review should be whether it is requesting any code variances (such as height or setback from the street), rather than just basing it on the size and complexity o the project as the city suggested.

With the great interest by Gonzalez, Herbold and O’Brien in making timely responses to the developer and neighbor complaints, the committee will probably try to do some smaller-scale, surgical updates to the process that maintain or increase community input while making things faster and more predictable for developers. They gave no timeline for proposing legislation, however, so we shall wait and see what emerges in the coming weeks.