The Department of Transportation and the Port of Seattle faced off this afternoon at the Sustainability and Transportation Committee meeting. At issue: what will be the impact of the proposed SODO Arena on transportation in the immediate area — and particularly freight transportation. Unfortunately, they both missed an opportunity to solve an even bigger issue.

Both sides came armed with experts and PowerPoint slides. Here’s SDOT’s, and the Port’s. They don’t actually disagree on the facts (both rely heavily on the Environmental Impact Statement performed on the arena project). Where they differ is on what those facts mean.

A relatively minor issue is the one block of Occidental Avenue, between Massachusetts and Holgate, that would entirely disappear in the transaction; the stats show that it has light traffic. Even the representative of the Port of Seattle couldn’t debate that point. Most of that traffic is people avoiding the intersection of 1st and Edgar Martinez Drive which can easily be diverted down Massachusetts instead of Holgate. 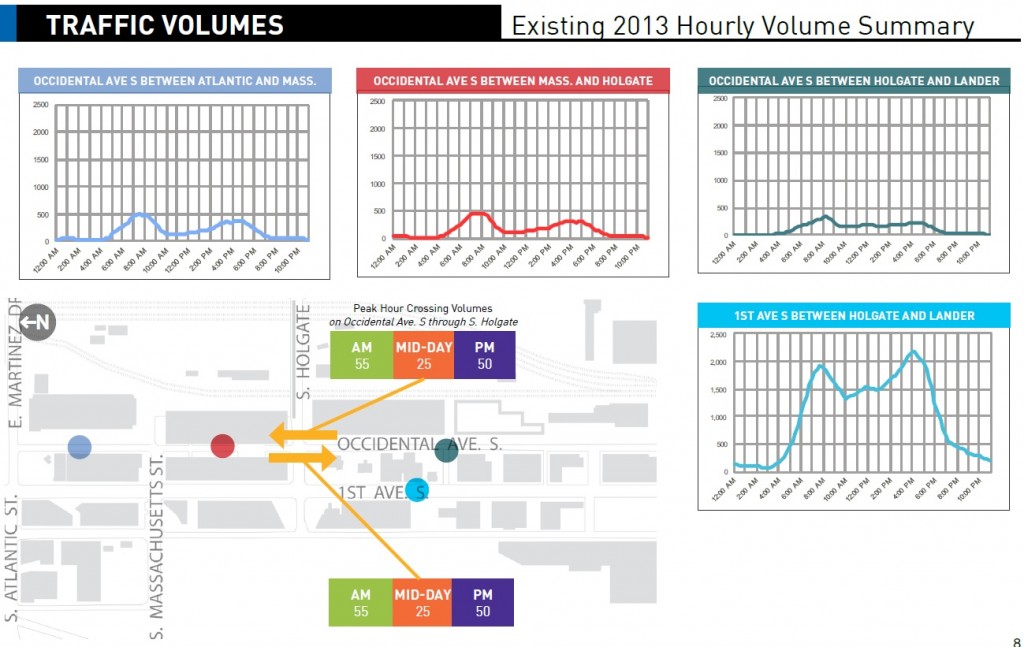 But the Port representative argued two other points: first, that it’s important for “grid flexibility” in that area so that if something happens on 1st Avenue (the main thoroughfare that gets considerably more traffic) Occidental is the only north-south alternative to for diverting traffic on that side of the railroad tracks. Second, that the street could have enormous future opportunities that no one could anticipate today, and by vacating it now the city foregoes the option of ever using it later. Neither argument is particularly persuasive; Occidental is a poor cousin to 1st Avenue, narrow and poorly maintained with awkward parking on both sides, and could never be a true substitute for 1st Ave. 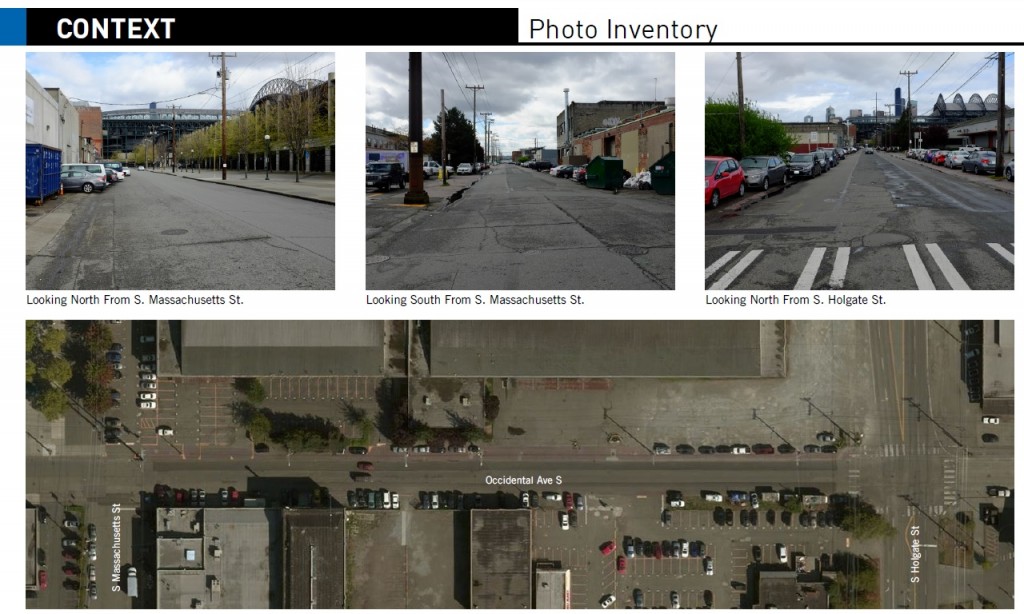 As for the argument that the city should keep it for its future opportunities: well, a new arena is one opportunity, especially since the city will end up owning the arena according to the terms of the MOU.

Which brings us to the real argument: what adding a 20,000 seat arena will do to traffic in the area, an industrial area admittedly very important to freight traffic both from the Port and from other businesses there. This is really a conversation about what events will happen there, with what frequency, and at what time of day. Fortunately, that’s been studied ad nauseum: 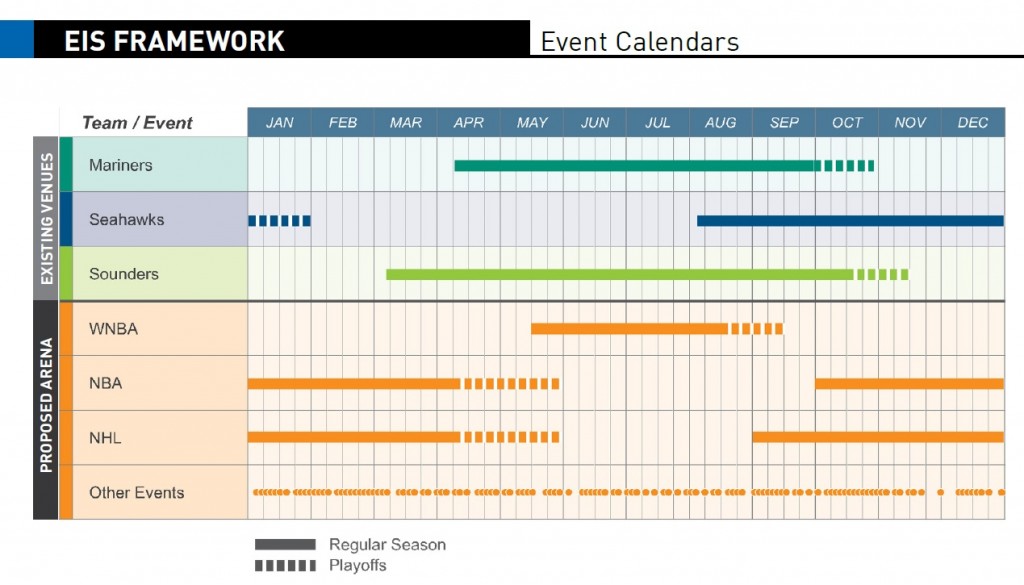 The good news is that the NBA and NHL schedules complement the Mariners and Sounders schedules well — and that’s important because those are the four sports that have daily games when the team is playing at home.  The Seahawks schedule overlaps heavily with NBA and NHL, but the Seahawks only play one game a week and almost all of them are on Sundays. Keeping in mind that CenturyLink Field holds 65,000, Safeco Field holds 41,000, and the new arena would hold 20,000, a game at the Arena would have a smaller impact than a Mariners game — and we know what that is like already. Also, NHL and NBA games are almost all in the evening, so for most of the work day there is no effect on traffic. That means we’ve narrowed the problem space to weekday evening rush hour, for about three hours (4pm- 7pm) as people try to get to a game at the Arena (the post-game traffic will be at night time when we’re not worried about impact on freight traffic).  So then the question becomes about additive effects: what does it mean to have games in the SODO District on more weeknights, and in particular what does it mean when there is an event at two — or even three — of the venues simultaneously? And how likely is that to happen? The “how likely” part has also been studied, based on typical sports schedules (and concerts and other events): 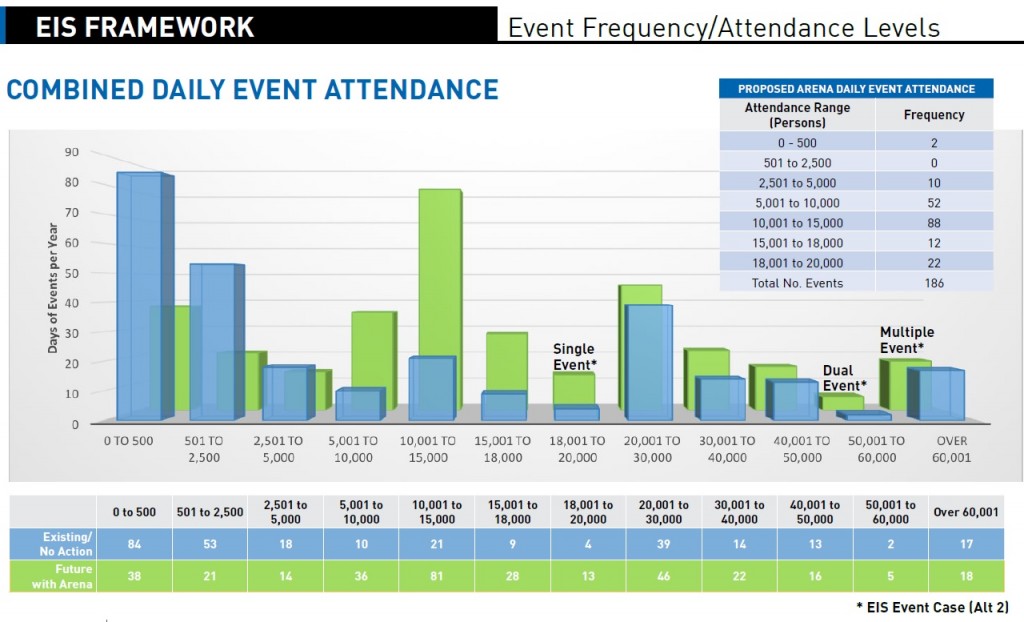 Urban and traffic planners take reams of data and create models of traffic flow — and that’s exactly what they did for the environmental impact statement, including looking at multiple-venue events. SDOT described the situation for the PM peak traffic hour with only an event at the Arena: 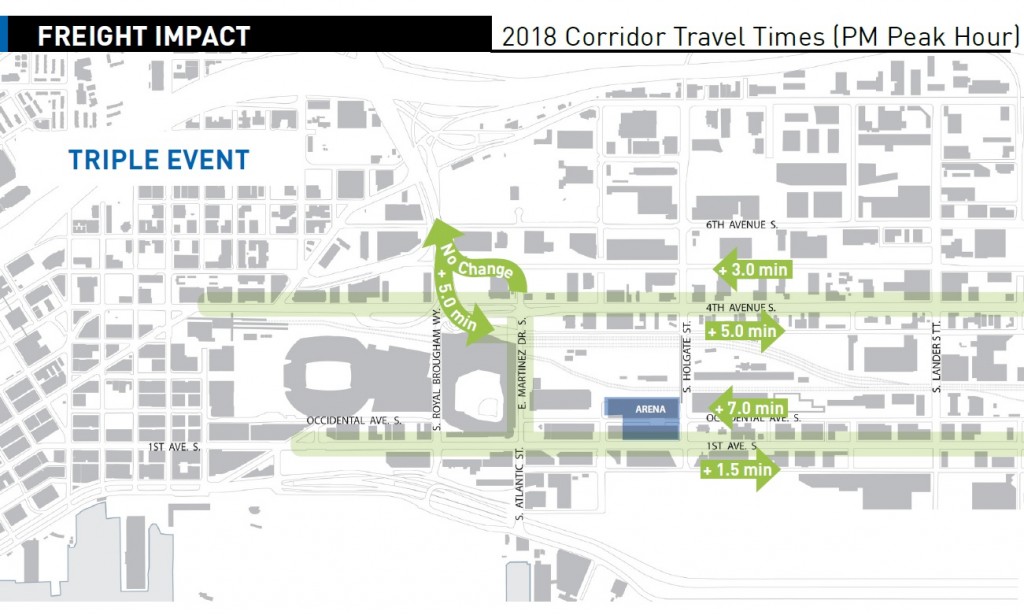 Basically, the time to move along 1st or 4th increases by a few minutes. And the situation certainly gets worse when there is an event at one of the stadiums as well — but it’s still on the order of minutes. The Port of Seattle showed essentially the same data, but declared that this was the end of the world. 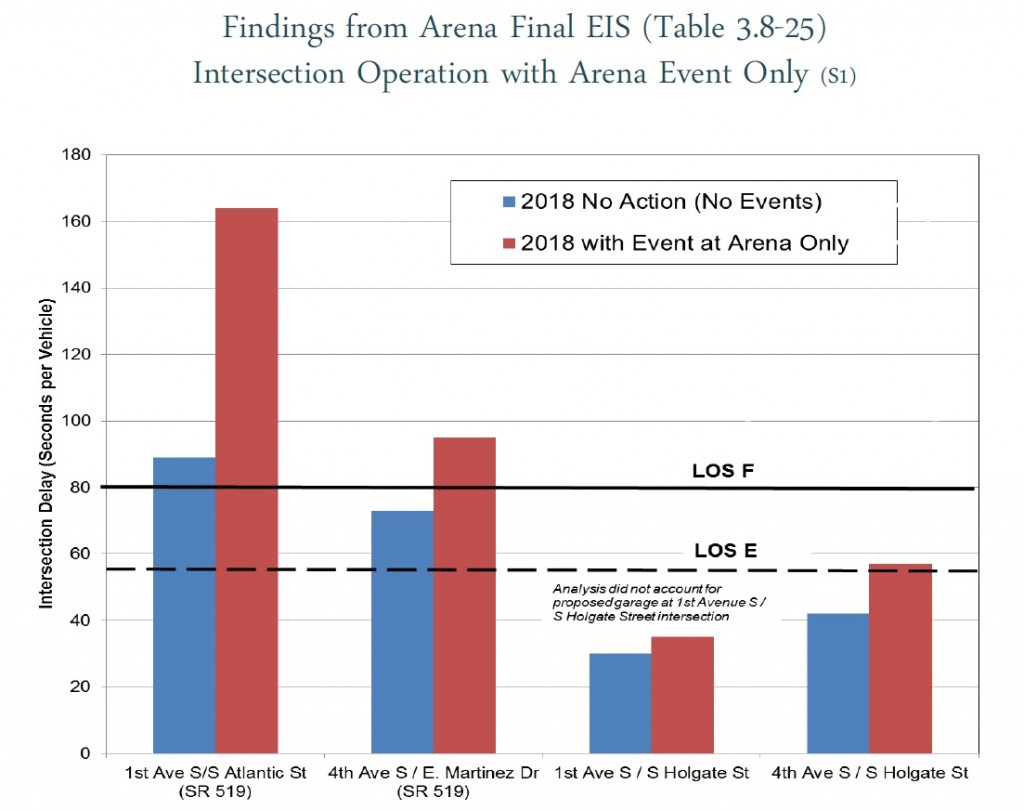 (note the y-axis in the above chart measures seconds, not minutes) 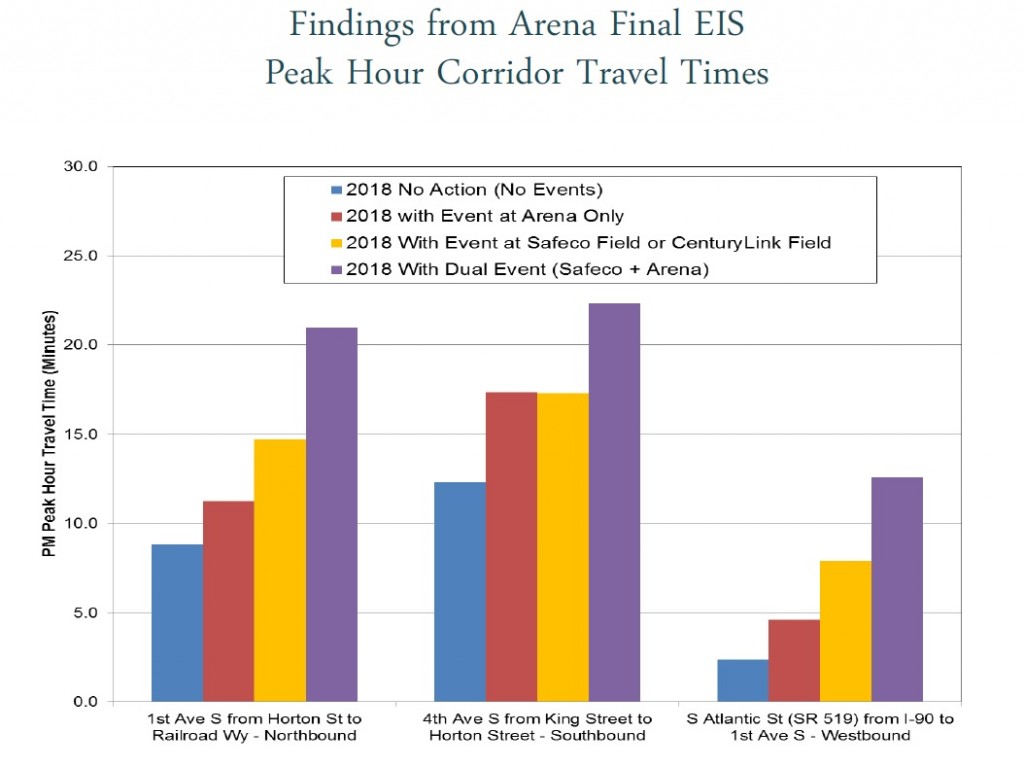 Let’s put this all together: on about 31 days a year, there could be simultaneous games at the Arena and at Safeco Field. Some of those will be weekdays, and on those days between 4pm and 7pm traffic will really suck in the SODO area as people try to get to the games and it could take 13 minutes longer for a freight truck to get through the area. On more weekdays when there is only an event at the Arena it could take 5 minutes longer than it would otherwise.

According to the Port of Seattle, this is why there shouldn’t be an Arena. And this is even before any attempts to try to coordinate schedules of the various sports teams to avoid multiple-venue days — which the Council absolutely wants to make happen (they will write it in as a condition of the street vacation).

What makes the Port’s position even sillier is that there is a far bigger impediment to the SODO freight traffic: the railroad crossings on Holgate and Lander streets. And the Environmental Impact Statement studied that too: 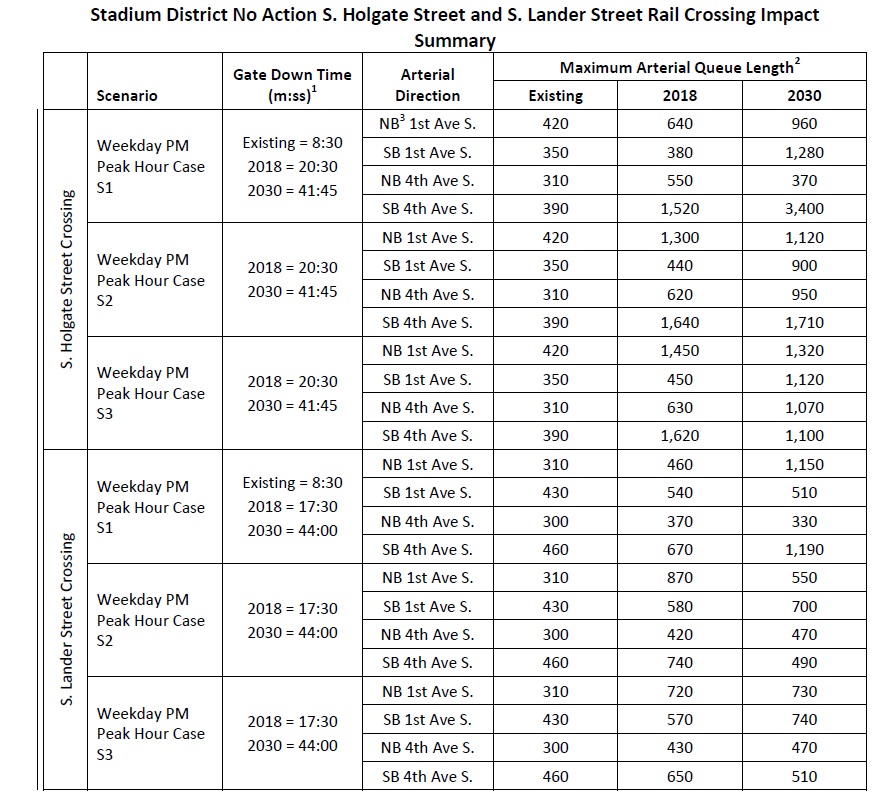 The big revelation here is looking at the “gate down time” — the number of minutes per hour that the railroad crossing gate is down. Right now it’s about eight and a half minutes per hour during evening commute. By 2018, with increased light rail, freight trains, and other rail traffic, it’s expected to be between 17 and 20 minutes. And by 2030, with a second light rail tunnel and even more rail freight they predict a staggering 41-44 minutes every hour that the gate crossing will be down across these two streets. Even today it’s a huge contributor to traffic backups in the area, even without an arena, and it is going to get much, much worse — all day long. Having some games at the arena and messing up traffic for a couple of hours is a rounding error compared to the impact of those rail crossings to the all-day operations of the Port and its industrial neighbors.

And the solution is obvious: build overpasses along those roads to take traffic over the rails. They’ve just done that on Atlantic between the two stadiums, and on Edgar Martinez Dr. at the waterfront. In fact, SDOT has been proposing doing exactly that on Lander St. for almost a decade, and has it partially designed. The project got shelved for lack of funds.

But it turns out that the arena MOU has a provision for $40 million to be paid into a fund for transportation mitigation projects around the arena. That probably wouldn’t pay for the entire overpass, but it would cover a good chunk of it. Between the city and the Port, they ought to be able to find the rest — particularly since the Arena will generate ongoing revenues for the city.  Wouldn’t it be great if instead of creating issues for freight traffic, it became the excuse for fixing an even bigger traffic problem in the area that helped both the port and directly mitigated stadium and arena traffic issues? (BTW, Transit Seattle Blog suggested this over three years ago)

Moreover, the City will need to build this overpass anyway over the next few years as it ramps up rail traffic along that corridor. It will be completely unacceptable for the crossing to be blocked 20 minutes out of every hour, which is the prediction for 2018 — only two years from now. Plus there will be safety benefits to getting it built; how many fewer vehicle-train accidents will it take to pay for it?

And by the way, the current arena plan includes building a pedestrian overpass along Holgate. You could cut that, and redirect the money into building the full Lander vehicle overpass with sidewalks. Or build the vehicle overpass at Holgate first. Eventually they will need both Holgate and Lander to have overpasses.

Or we could continue to argue about whether waiting a few minutes on a handful of weekday evening commutes constitutes a major disruption to freight traffic in the SODO area. If half of the Port’s energy were being put into finding constructive solutions instead of obstructing the Arena project, they would probably have figured out already that they could get the Lander overpass built now and get an all-day, every-day benefit.