This morning at the Council Briefing, three UW faculty members gave their first report on a City-funded minimum wage study, setting a baseline for studying the preset and future impact of the raised minimum wage in Seattle as it continues to roll out.The City of Seattle contracted with UW in December 2014 to conduct the study through the combined work of three schools: the Evans School of Public Policy and Governance, the School of Social Work, and the School of Public Health. In early 2015 they began surveying employers and workers to record a pre-increase baseline so that they could accurately measure the impact of the staged increase in the minimum wage over time. This morning they gave their first report to the Council, highlighting what they have learned to-date. They also presented some real-world data on how prices have been affected through the first year of the increase.

The three presenters this morning were:

The survey work is split into two parts: employers and workers.  The team is taking a different approach to each of the two groups in how they recruit and what questions they ask.

The survey team recruited 567 randomly-chosen employers in Seattle who had employees paid less than $15 per hour. They intentionally oversampled for three industries known to have large numbers of low-income workers: food and accommodations, retail, and manufacturing. They fielded the baseline study between January and May 2015 (the first bump in the minimum wage took effect in April). 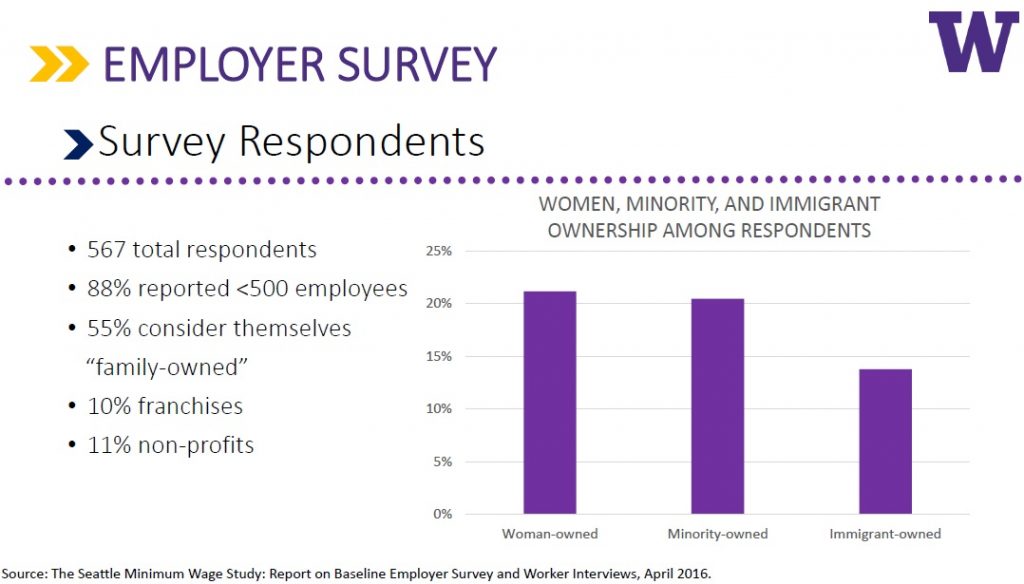 The good news is that employers seemed to be very aware of the new ordinance and had accurate information about it and the change in pay they would need to enact. 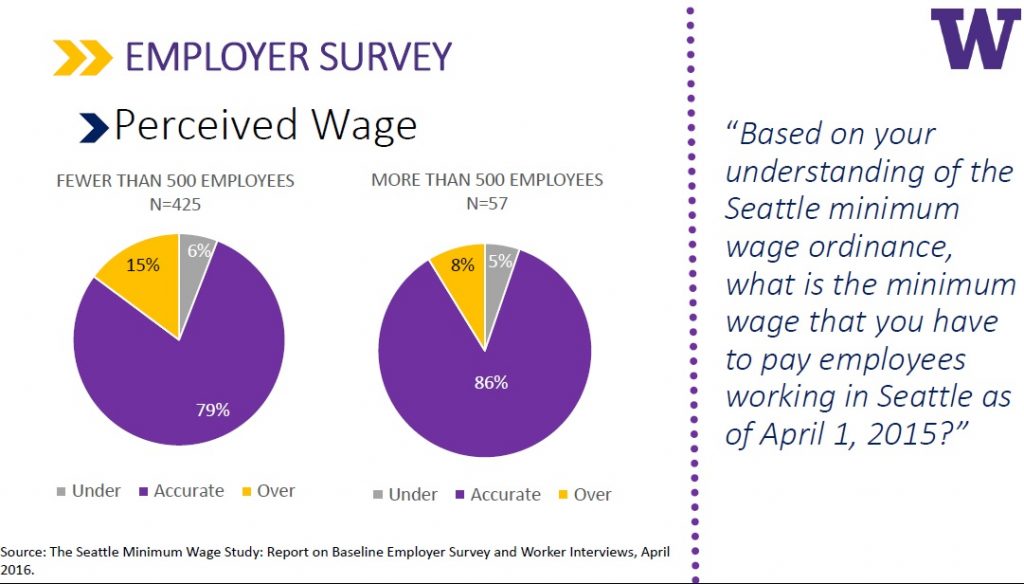 The UW team asked employers what actions they planned to take as a result of the ordinance, including things other than pay raises. More good news: few planned to leave Seattle or switch to contracting out work, and a minority planned to reduce staff. A majority said they planned to raise prices. 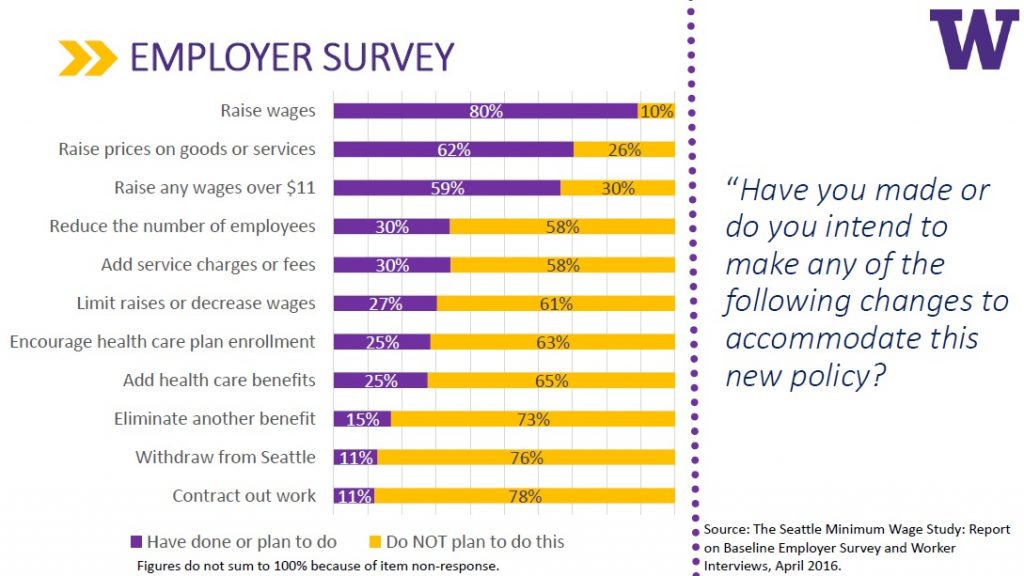 Not surprisingly, the food and accommodations industry was the most interested in raising prices. 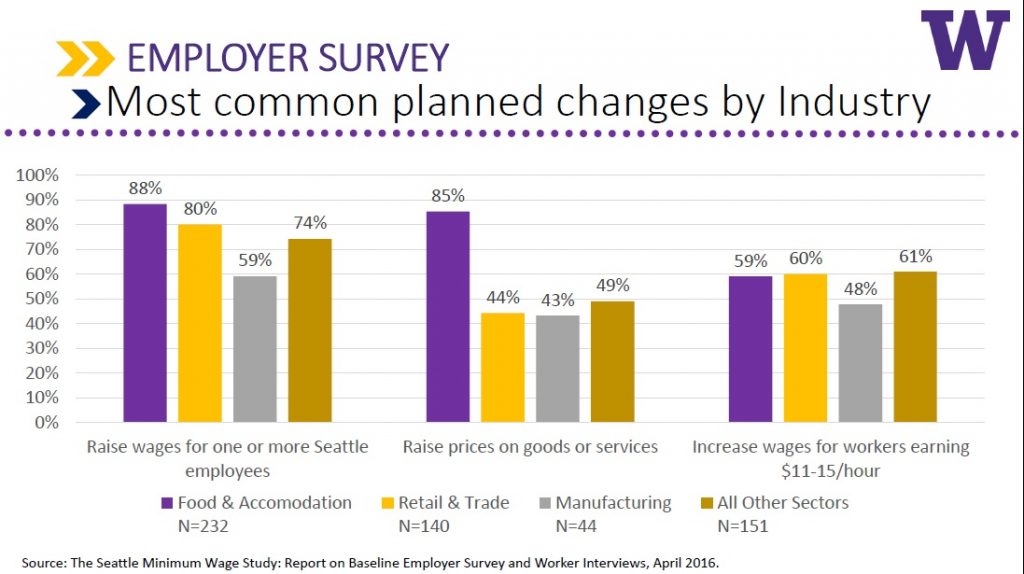 The UW study team has also been collecting real-world price data to detect whether prices have indeed risen. And the food industry didn’t lie; they raised prices 8-9%. 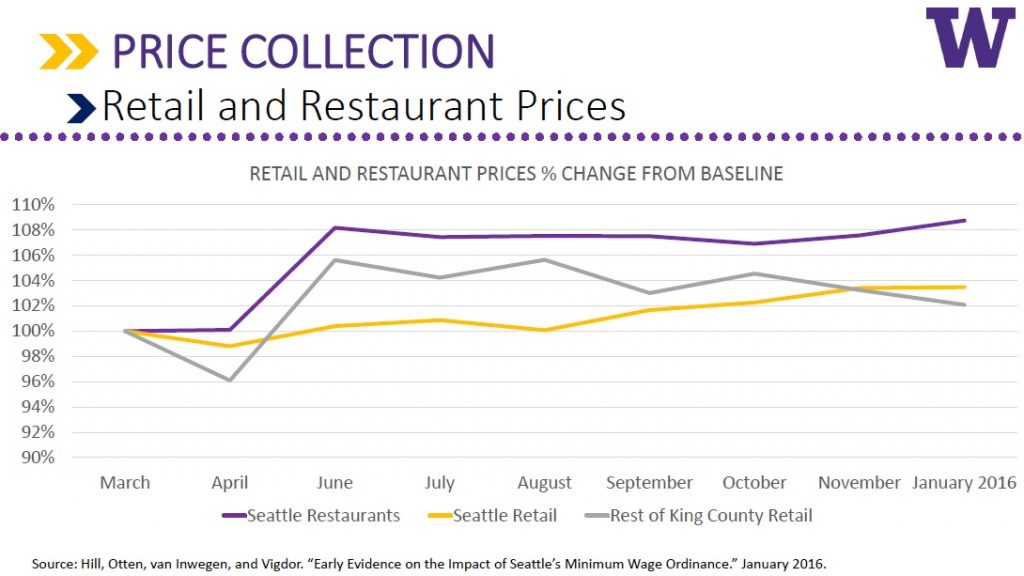 This slide needs a couple of caveats: first, you’ll note that there is no comparison line between Seattle restaurants and those outside the city not subject to the minimum wage. The team explained that they didn’t have enough data points for restaurants outside of Seattle to be able to draw a high-confidence comparison (collecting this data is labor-intensive and complicated). There is anecdotal evidence that prices have gone up outside of Seattle as well, though some believe that restaurants outside of Seattle may feel pressure to increase their wages too in order to stay competitive with Seattle wages and retain their employees.  Commercial rent is also jumping, another driver of price increases. Needless to say, the team is working on getting better data on food industry prices moving forward.

But outside of the food industry, it’s hard to find a spike in prices due to the minimum wage. As you see in the above graph, retail prices rose 2-3%, but did so consistently outside of Seattle as well. Grocery prices are flat, both in Seattle and in King County: 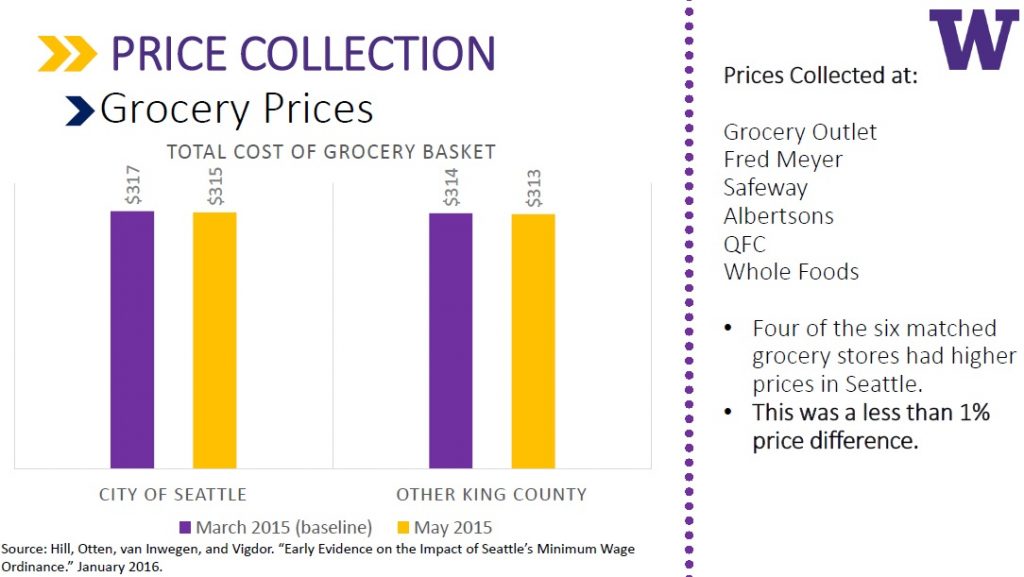 Rents have marginally risen, but they have risen faster outside of Seattle. 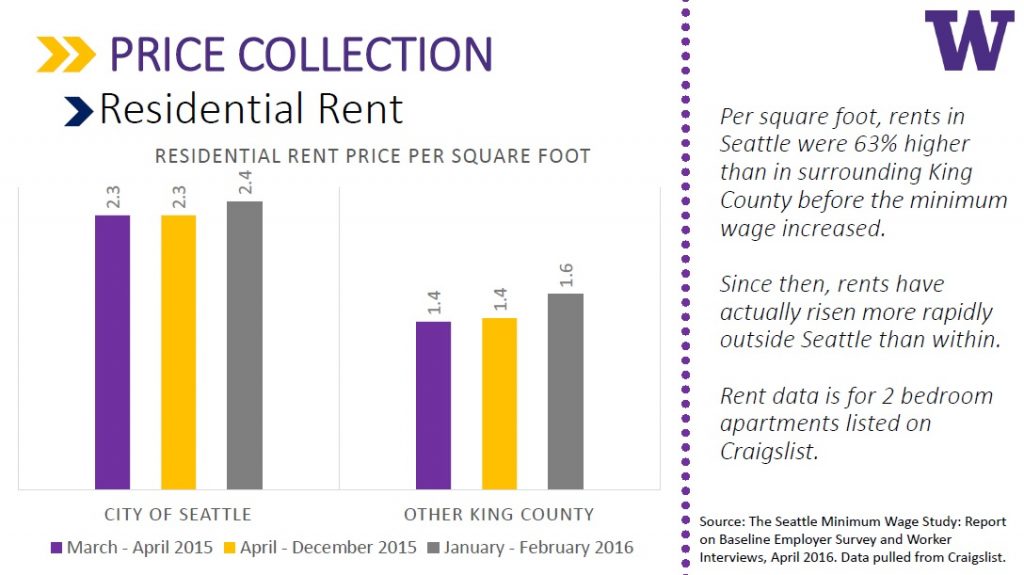 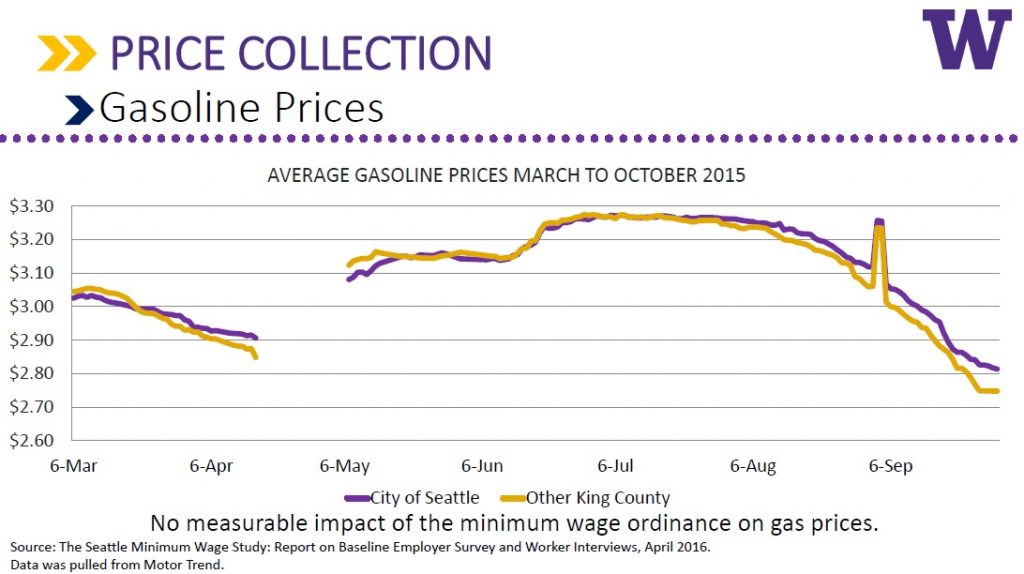 Out of all these industries, the food industry is probably most dependent upon labor so it makes sense that it would be disproportionately affected by the minimum wage increase. We will see how this year’s bump up further affects prices over the coming year.

The UW team’s study of workers is taking a slightly different form. They are choosing a smaller set of workers — about 55 — but going much more in-depth with them; they hope to follow them closely for three years, with annual interviews and short phone calls intermittently in between. Workers are all adults making less than $15 per hour, in Seattle, with household income less than $50,000 per year, and with children in their household. The study participants as a whole are not numerically representative of the demographics of Seattle’s low-wage worker populations, but they do sample from diverse groups. Also, care givers are over-represented in the study. So the results of the employee work will be less about quantitative results and more about qualitative understanding. 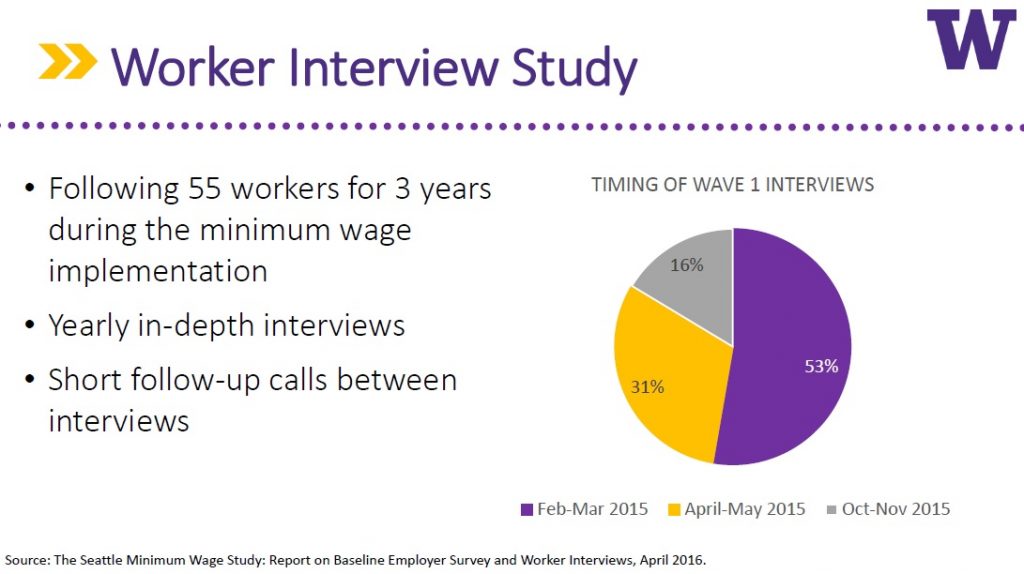 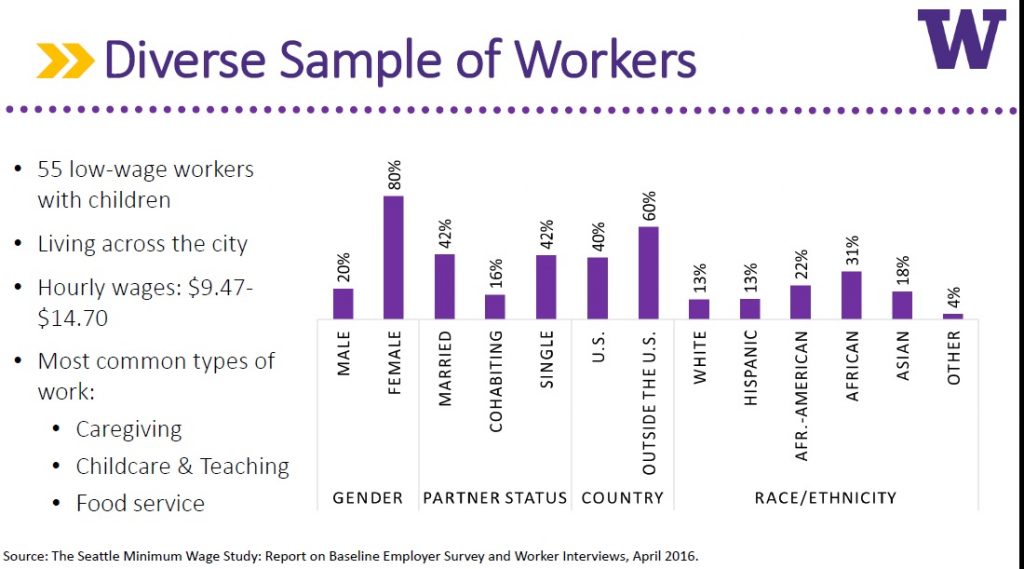 The bad news here is that workers generally had a vague or poor understanding of the minimum wage ordinance — and this was particularly true for immigrants. 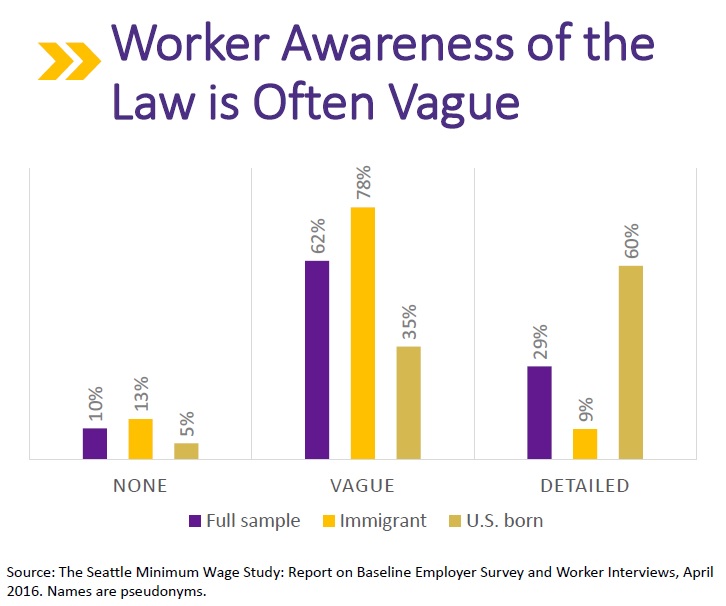 The presenters this morning didn’t specify whether any of the workers in the study are union-represented and whether that affected their awareness; I have an inquiry in to them to find out.

Many workers are ambivalent about the results of the ordinance; according to the UW team, workers have come to expect that an increase in one area is usually offset with a decrease in another (often public assistance). If their pay goes up, their housing subsidy goes down — which means that at the end of the day an increase in the minimum wage doesn’t improve their standard of living. Losing housing subsidies is a large concern, since an increase in pay could push some of them past a threshold where they lose housing assistance entirely and end up worse than they were before. The UW team plans to track and explore that issue further with the study participants.

The City Council seemed very happy with the data that is being collected; Council member Burgess, who hosted the presentation this morning, pointed out “The Council wants to make public policy decisions based on facts,” and seemed particularly glad to be getting a healthy dose of facts to inform their decisions. 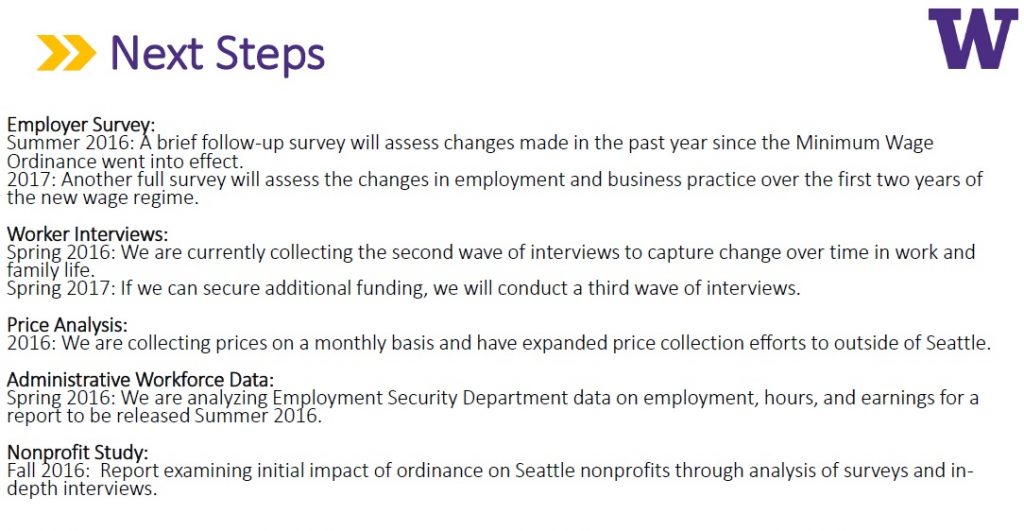 The team is out collecting the next round of worker data now, and will survey employers again this summer. They continue to collect price data for the Seattle-King County area, and have begun to leverage government agencies for additional data sources.

You can read more about the UW Minimum Wage Study here. And here is their full 31-page report on their results to-date.