This morning, the Planning, Land Use and Zoning Committee kicked off a long summer of reviews for the 2035 Comprehensive Plan by taking up two sections:  growth strategy and land use.

The plan as presented today is built around the belief that Seattle will add 70,000 new housing units and 115,000 new jobs over the next 20 years. Those homes and jobs need to go somewhere, and the Comprehensive Plan places the vast majority of them (85% of the housing units) in so-called “urban centers” and “urban villages.” There are not new concepts; they are firmly entrenched in the last Comprehensive Plan which ran from 1995-2015. But a lot of growth has happened since then, bringing both benefits and problems. There have also been other changes, most notably the large investments in mass transit, which bring new context to the plan as the city looks to the next 20 years.

This is a very difficult conversation to have, as Seattle is largely a “filled in” city without open spaces for further development. Accommodating growth inevitably means adding density to existing zones within the city, and doing that risks changing the character of those places. The Mayor’s proposal for the plan concentrates the increased density into the places that had already been designated as urban centers and villages: 18% of the total land mass of the city. It also suggests studying expansion of the boundaries of some of those centers and villages, which would change the underlying zoning designations. All of this makes lots of residents nervous: the people who live in urban villages that are about to get denser, the people living just outside the borders of urban villages who worry about density, traffic, and other urban woes changing the character of their neighborhoods.

None of this is lost on the city — they’ve been stung by the backlash from earlier drafts, and from the Mayor’s trial-balloon suggestion that single-family zones across the city should be upzoned (that idea has disappeared with no remaining trace). 50% of the housing growth and 60% of the jobs are estimated to go into the six urban centers:

35% of the housing goes into urban villages, but arranged in a way to put more growth in “hub” villages, those with better transit access, and those with lower “displacement risk.” 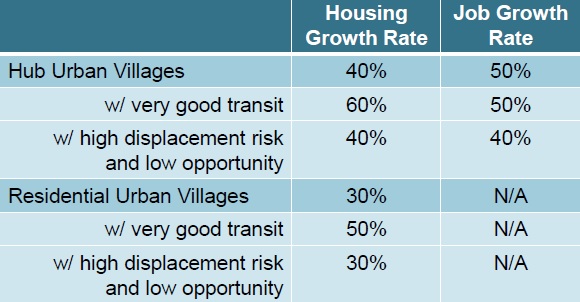 Laid out on a map, you can see the concentrations around major transit corridors, including the light rail stations. 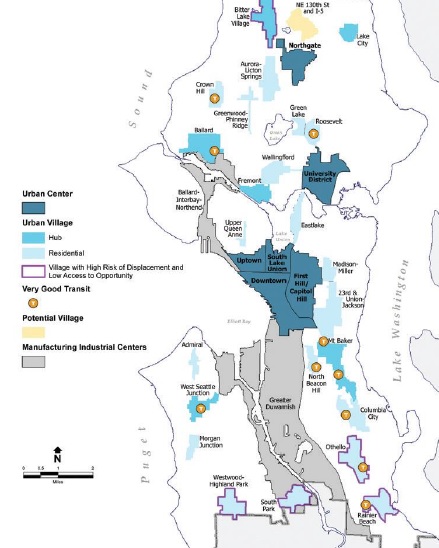 The plan calls for one new urban village surrounding the intersection of NE 130th and I-5, which now has a hard-won light rail station on the books (in fact, the urban village designation was one of the city’s key arguments in pushing for the station). The area is currently single-family homes, and one of the issue the city will need to wrestle with is how to manage that transition to urban village in close cooperation with the existing community there.

The detailed version of the Comprehensive Plan map shows (in dashed lines) some potential expansion areas for existing urban villages that the city wants to study; based on the discussion today those may get taken out of the official plan and left for future work (the plan can be updated once a year) for fear of misleading people into thinking that it’s a “done deal” (it’s not).

The changes to the land use section of the Comprehensive Plan are mostly about removing details to increase flexibility: detailed zoning within urban centers and villages are no longer specified, and some zoning designations are modified or removed to make room for a wider range of housing types within single-family areas inside urban villages. There are, however, a couple of specific changes in the plan, including requiring transitional zoning at the edges of (but still within) urban villages to match the single-family zoning surrounding them. The plan also makes some changes to avoid “incompatible uses” near airports.

There stuff that the pro-density urbanists will like, especially if the city can match it with better mass transit and bicycle infrastructure within and between urban villages and centers. And the NIMBYs will like that the vast majority of single-family neighborhoods will be left alone.  The hardest conversations will happen with the residents of urban centers and villages, and especially those living on their edges; they will see the most change, and the reactions will be across the spectrum.

There is more work to do, and some hard questions to wrestle with. Some are laid out in a memo written by the Council’s central staff; the PLUZ committee will likely discuss those issues at their next meeting.  In the meantime, the Comprehensive Plan will continue its summer tour series, with the Sustainability and Transportation Committee next on June 21st. 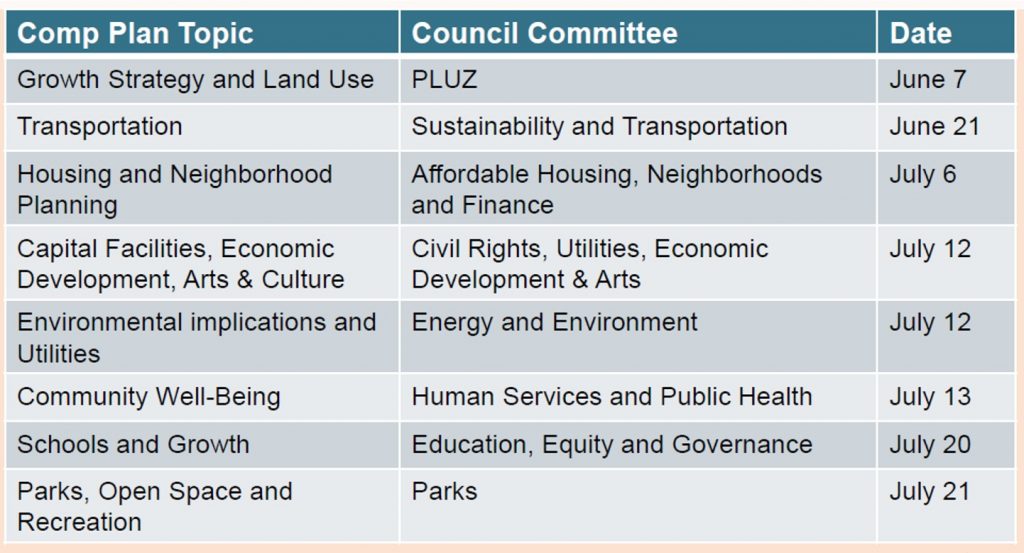 There will also be a public hearing on the Comprehensive Plan on June 21st.

You can read the full Comprehensive Plan at http://2035.seattle.gov.