The Council has been working its way through reviews of the various sections of the 2035 Comprehensive Plan, and the accompanying Mandatory Housing Affordability program. From the public comments during Council hearings and from discussions on social media, it’s clear that there is a lot of confusion about what the plans say. And it should be no surprise; the Comprehensive Plan is huge, and the city staff made many well-intentioned changes in the way it’s organized that are more confusing if you’re familiar with the old plan. They have published a “crosswalk” document to guide people trying to compare and contrast the old and new Comprehensive Plans, but even that document is 316 pages.

I’ve collected some of the common questions and points of confusion into a handy Q&A, culled from several presentations to the Council and from information posted on city web sites.

Why is the city writing a Comprehensive Plan?

What is the MHA plan?

The Mandatory Housing Affordability plan is a replacement to a voluntary incentive-housing program the city has been running for several years.  The goal is to create 50,000 new housing units over the next 10 years, of which 30,000 will be market-rate and 20,000 will be new or preserved affordable units. How it works: in exchange for loosening the zoning restrictions in some places in the city to allow for slightly larger buildings, developers will either make a payment into a fund that will create and preserve affordable housing across the city, or set aside some units in residential development projects to be rented at affordable rates for the next 50 years.  It applies to both commercial and residential developments. The commercial part of MHA was already enacted last fall. The residential part has two phases: first the general framework is put in place, then the specific zoning changes and set-aside/payment requirements will be established for each neighborhood in a separate process involving extensive community input.

What’s in the Comprehensive Plan?

It intends to live up to its name, with coordinated plans for everything from land use, transportation and economic development; to parks and open space, arts and culture, and utilities. 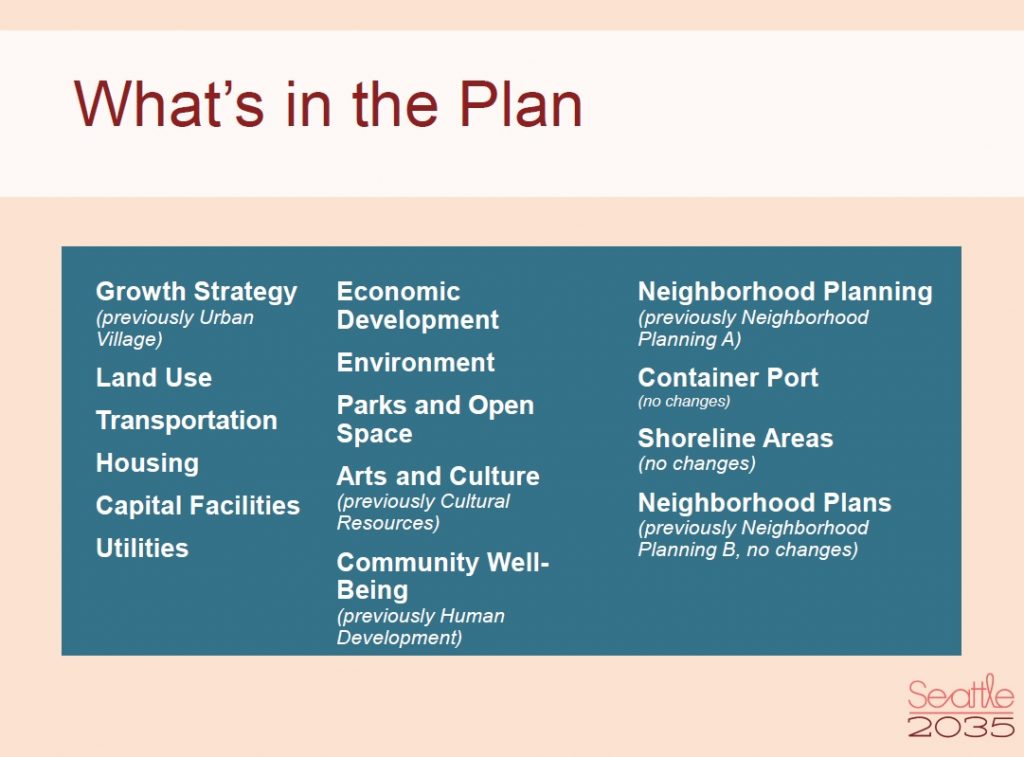 Why does the Comprehensive Plan need to be updated?

A lot has changed in Seattle in the last 20 years. Since 2004 alone the city has added 51,000 housing units and 58,000 jobs. It’s also seen its automobile traffic woes grow substantially, and built out a light rail line to start to address it. The local economy has changed as well, with an explosion in the tech and biotech industries and continued growth in freight traffic. Housing has become much more expensive with the arrival of well-paid tech jobs, and that has increased the economic disparities in the city. Expectations for the next 20 years are for more growth (70,000 people), more jobs, and increased transportation needs.

What’s in the new Comprehensive Plan?

The heart of the plan is an integrated strategy to direct population growth, housing, and jobs into specific areas of the city where high-capacity transportation corridors can support them. This is called “transit-oriented development.” The other components of the plan are designed around supporting that growth plan, including other desirable and essential services that should be close to those areas.

It builds on the “urban village” concept from the old plan, extending those urban villages by upzoning them to allow for further development and in some cases extending their boundaries.

The development capacity report says that Seattle already has capacity for 220,000 more housing units. Why do we need to upzone and expand the urban villages if we already have three times the capacity we need for the next 20 years?

Yes, the development capacity report says that under the current zoning there is capacity for 220,000 more units of housing. But there are some important caveats to that. First, that includes all “underdeveloped” lots that haven’t been built to the fully allowed capacity, so those lots would require expanding or replacing the existing structures to realize the gains. Second, the full capacity is spread all throughout the city and to rely solely on that would make traffic far worse than it already is. Aligning housing, jobs and transit is the only way to prevent the additional growth from degrading the quality of life in Seattle. 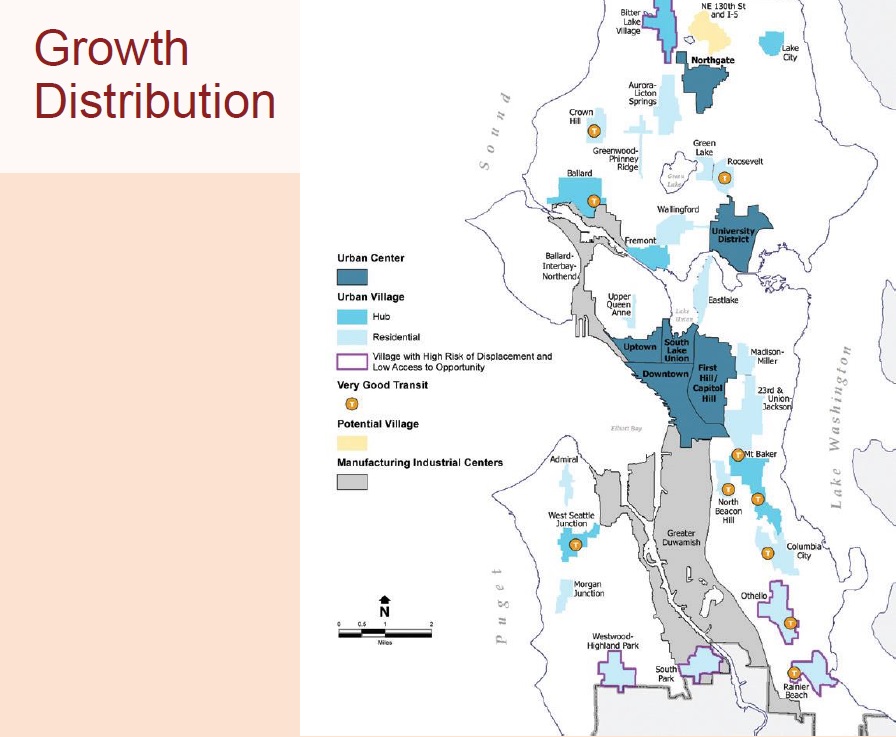 Don’t upzoning and development displace people from their existing homes?

It certainly can, if not managed well. And as we can see in Seattle today, growth and development without a supporting zoning plan also cause displacement through unaffordable housing and economic evictions. But the city has a number of programs that it is putting in place to try to ensure that affordable housing is both preserved and created — collectively dubbed HALA, the Housing Affordability and Livability Agenda. The centerpiece of that is the Mandatory Housing Affordability (MHA) program which requires all new development projects – both commercial and residential – to either set aside a certain percentage of residential units to be rented at affordable prices or to make a payment into a fund for the preservation and creation of affordable housing. 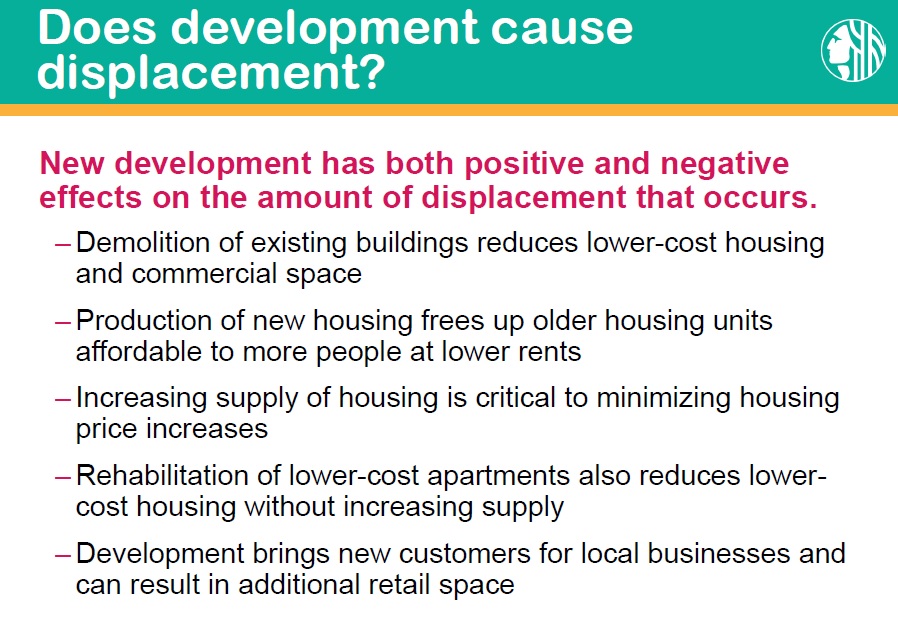 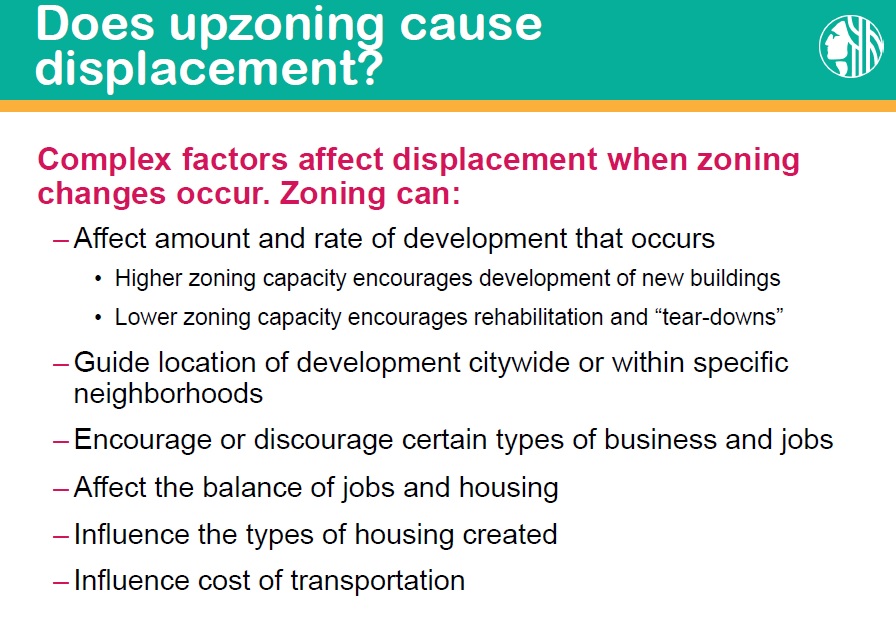 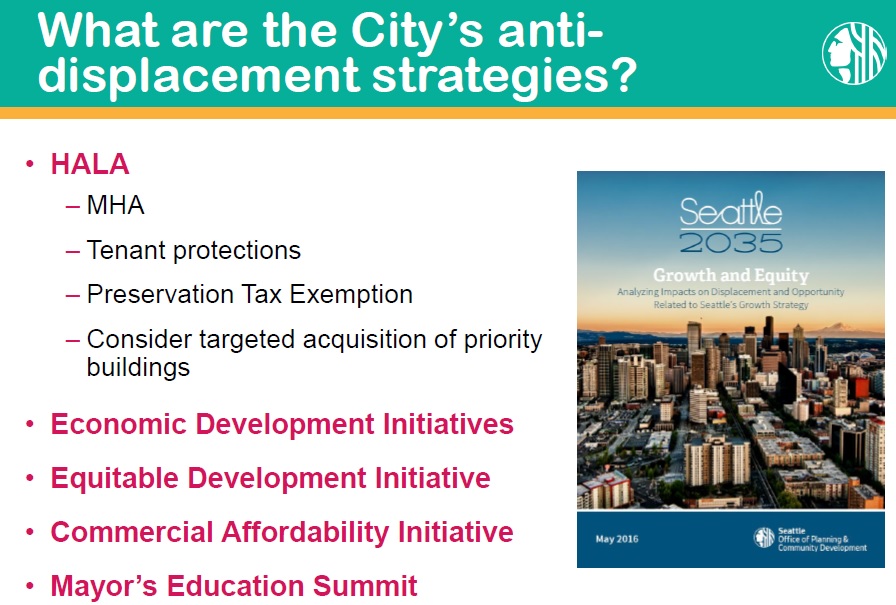 Won’t further development further exacerbate problems with the Combined Sewer Outflow system, particularly in the Wallingford/Fremont/Magnolia area where there has already been incidents of raw sewage being dumped into the Ship Canal? Shouldn’t we put off further development in areas served by the CSO system until it’s been upgraded to add capacity?

The Combined Sewer Outflow system feeds both sewage and stormwater into the same pipes which feed into the sewage treatment system. Most of the time it isn’t an issue, but during very large rain storms the amount of stormwater can cause the system to overflow and be dumped into the Ship Canal. The city is currently working on an upgrade to the system to increase capacity and prevent overflows. 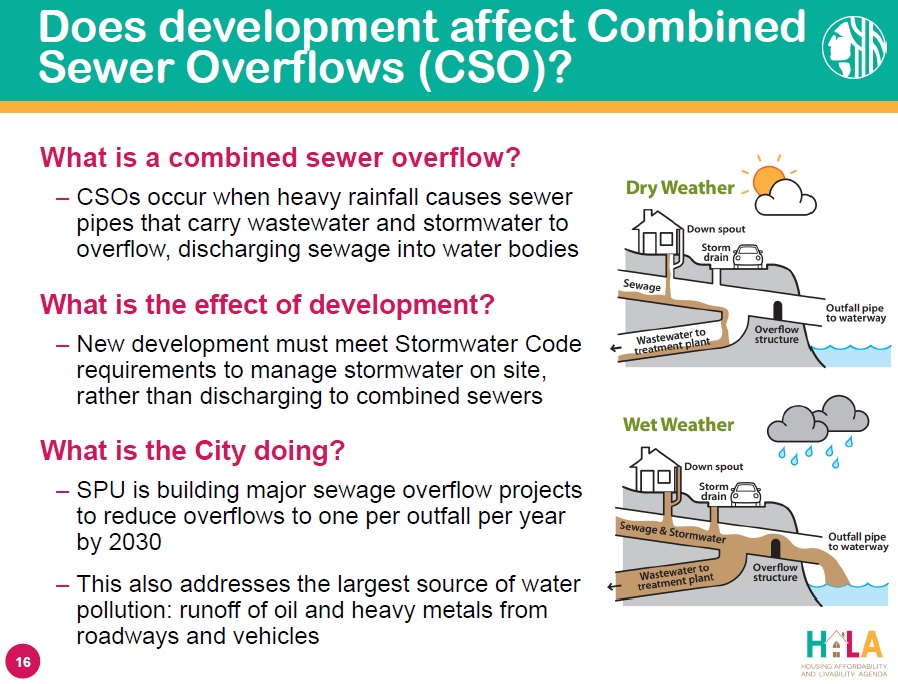 Why is the MHA residential set-aside such a low percentage compared to other cities with comparable programs? Isn’t that a “giveaway” to developers?

Seattle’s program is far more comprehensive, including both commercial and residential development projects and across the entire city. Because of that, it doesn’t require as high a set-aside as other cities have used to generate a significant amount of affordable housing. And keeping the rate lower encourages developers to build more housing. 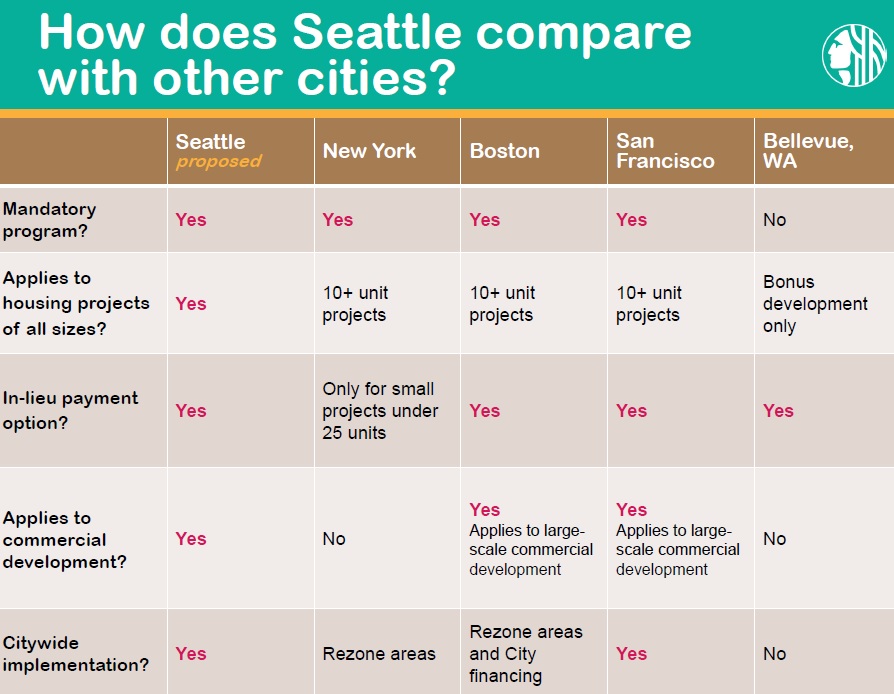 Why have the MHA “payment” option? Why don’t we just require all developers to set aside units in their development projects to ensure that there is affordable housing co-located with the market-rate housing? When a developer makes payments in lieu of set-asides, is the money guaranteed to be used for housing in the same neighborhood?

The “payment in lieu” is substantially higher than the cost to the developer of setting aside units. Because of that (and a few other factors), the payments generate approximately 2.5 times more affordable housing units than set-asides. Having the payment option is also much more workable for small development projects. It also gives the city the opportunity to control the kind of affordable housing that is built, for example family-size units with 3 or more bedrooms which are very scarce today in multi-family housing developments. And MHA funds from payments can be used to acquire and preserve existing affordable housing, in addition to building new affordable housing.

The city has been running a voluntary version of this program for a few years called “Incentive Zoning,” and they have established practices and a track record for creating affordable housing at sites spread across the city. 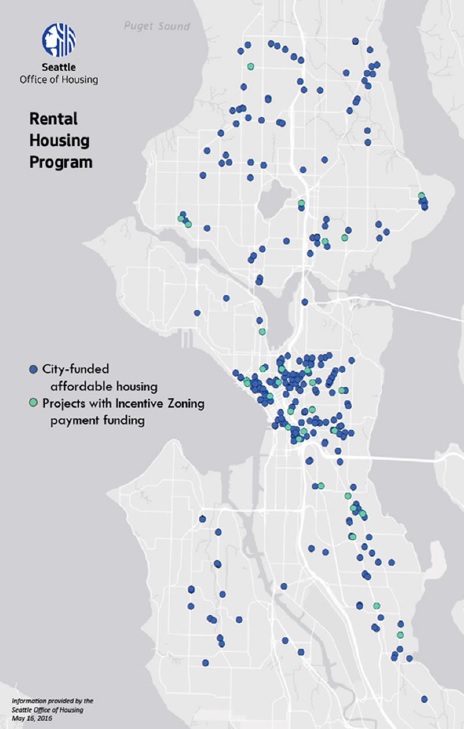 That said, the funds aren’t committed to the neighborhood where they were generated. That way the city can pool small amounts of funds from different projects that are geographically spread and move faster to get housing built than if it had to wait for enough to accumulate in each area. But if they continue their excellent track record of seeding affordable housing projects around the city – and they intend to, especially in the urban villages – then it’s really a moot point. Over time, all areas will get more affordable housing projects funded by MHA. So yes, the city is asking Seattle residents to trust that the MHA program will continue to spread affordable housing projects around, but they have certainly shown that they can and at this point there is no reason to believe that they won’t continue to.

What happened to the neighborhood plans from the last Comprehensive Plan?

They are all still there, and compiled together into Volume 2 of the new Comprehensive Plan. None of them have been changed from the previous version – yet. The 2035 Comprehensive Plan and the MHA plan are high-level frameworks without specific details for neighborhoods. Once they are passed this fall, a separate process will engage with each of the neighborhood communities to work through updates to the individual neighborhood plans. Likewise, the MHA will have specific numerical targets for each neighborhood that will be set through the same process.

Why were the “community engagement” details taken out of the Comprehensive Plan?

They weren’t; they were just moved to a place that’s harder to find. In the last version, they were spread throughout the whole plan, so you could see for each element of the plan what the opportunities for community engagement were. In the new version, they were all collected into one section – even though they still apply to the whole plan. The intent was to show the entire community engagement plan and all the ways that residents can have input, but unfortunately it could also give the (wrong) impression that community input is not as highly valued. To-date the community engagement has been extensive; after the approval of the general plan this fall, it will continue on, focused on the updates to the neighborhood plans.

Is it true that the plan includes upzoning all single-family zones in the city to allow for more density?

Probably not – and certainly not uniformly. The upzoning is intended to concentrate additional growth within a 10-minute “walkshed” of high-capacity transportation stations. The general guidelines also require building heights to taper down toward the boundaries of the urban village so that at the boundary they match the height limit of the adjoining buildings outside the boundary. The uniform “painting” in the draft plan is simply meant to represent the areas that will be under discussion in the neighborhood planning process, and not any specific zoning changes. 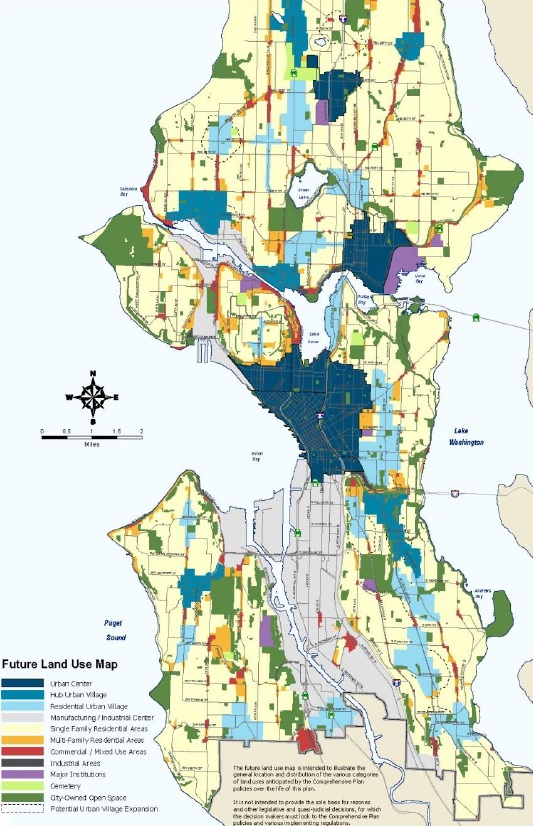 What’s the schedule for reviewing and approving the Comprehensive Plan and the MHA Residential plan?

The City Council is reviewing each element of the Comprehensive Plan this summer. They intend to start considering amendments in early August, and their goal is to wrap up and approve the final Comprehensive Plan in September before the 2017-2018 budget process begins in earnest. 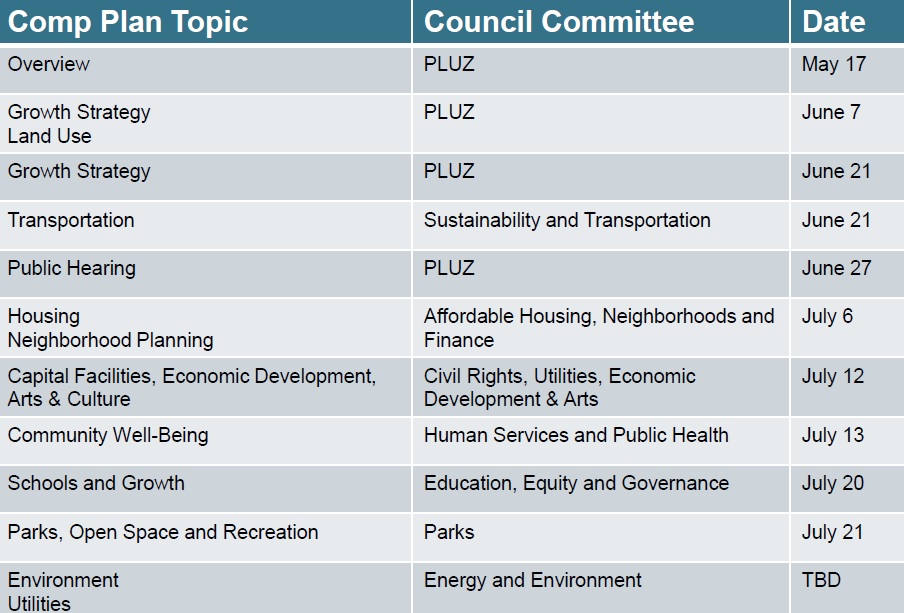 The MHA “general framework” legislation is similarly working its way through the City Council; they will begin considering amendments next week, and possibly vote it out of committee as soon as August 2. The full Council will then try to vote its full approval (with any additional last-minute amendments) before it takes its August recess.

After that, there will be separate pieces of legislation for each area of the city subject to rezoning. Originally the first area was intended to be downtown and South Lake Union,  but a group of residents have filed an appeal to the SEPA review. That appeal will be heard by a hearing examiner on August 24th, and the MHA legislation for that area will be on hold until the examiner rules.

In the meantime, the University District MHA rezoning is proceeding, and the city expects to introduce that legislation in August.  Other areas are expected to see re-zoning in 2017. 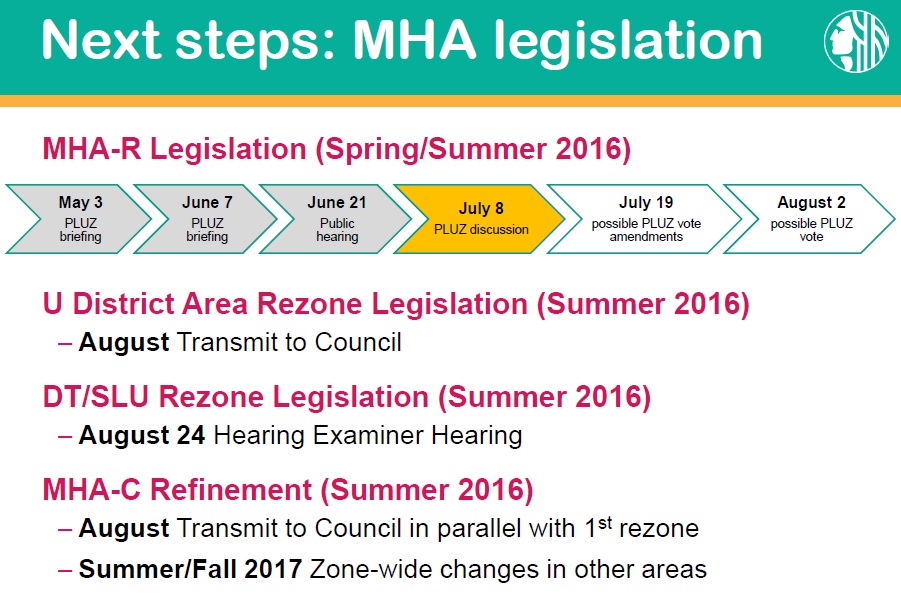