The Human Services Department, often referred to as HSD, is one of the largest departments in the city with 325 full-time employees and a proposed 2017 budget of $156.7 million. Where does the money come from, and where does it all go?

HSD gets its money from a number of different sources. 29% comes from the federal government; another 10% comes from the State of Washington. But over half is funded out of the city’s own “general subfund” coffers. 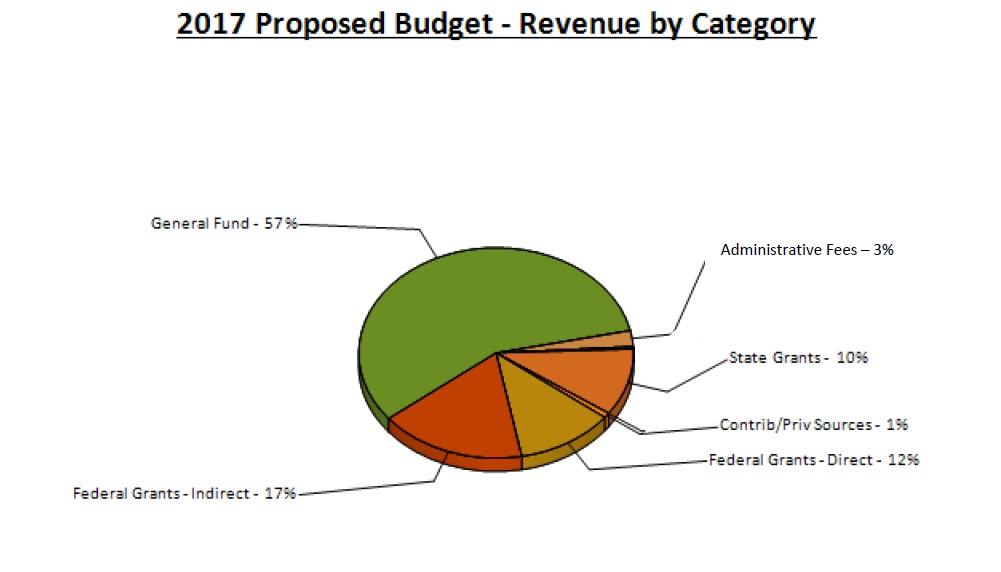 With one exception, you can think of HSD as a large nonprofit foundation that grants money to other organizations to do good in the community, similar to the Gates Foundation or the Clinton Foundation. In HSD’s case, it provides grants to over 170 organizations annually to provide a range of services. It is organized around program areas, with grant budgets and staff to administer each.

The exception within HSD is their Home-based Care program within Aging and Disability Services: unlike their other programs, HSD hires care workers that work directly with elderly residents in their homes. The program employs 145 workers and has an annual budget of $24.9 million — the majority of which is personnel expenses.

A couple of notes of explanation are in order here. First, the “other programs” line represent two smaller programs that don’t get much headlines: administration of a federal Community Development Block Grant (CDBG) of $5 million aimed at low-income and vulnerable residents, and the Mayor’s Office on domestic Violence and Sexual Assault ($6.4 million).   Second, the Public Health Services program has no full-time employees because Seattle jointly administers its public health services with King County — so this is essentially a pass-through.  Finally: I’ve reshuffled a couple of pieces from how the official budget documents lay things out, so if you go trying to compare my figures to what’s in the Mayor’s proposal, things won’t match up cleanly; if you really care, you can send me a note and I’ll walk you through it.

If we were to continue our thought-exercise of looking at HSD as a nonprofit foundation, we would want to look at the metrics by which nonprofits are measured. The key metric is: what percentage of expenses is directed into programs, and what percent goes into administrative overhead and fundraising.  Those numbers can be very hard to deduce for HSD based upon its published data, because it simply doesn’t organize its finances and reporting like that (and no one asks it to).  But we can make some rough estimates.

First, we’ll want to factor out the home-care services program, which employs 145 people and has a budget of $24.9 million. That leaves the remainder of HSD with 190 employees and $131 million.

The lowball estimate for overhead would be to use the “Leadership and Administration” section as representing the overhead. It’s lower than the real number because “fundraising” counts as overhead as well, and in HSD’s case that would include applying for and administering federal and state grants. The people doing at least some of  that work are spread throughout each program’s staff. But it will at least give us some sense as to whether HSD is a high or low overhead organization. The $10 million budget represents 7.6% of the $131 million restated budget, which in the nonprofit world is a good figure (below 15% is generally considered good). It’s a little misleading, because all the nonprofit service providers under contract to HSD also have their own overhead, so to fully understand how much money is truly being invested in programs you’d need to do the same calculation for each of those 170 organizations and roll it all up. But so far, there’s no alarm bells going off.

Of course, all the attention, including the City Council’s, is on the homelessness program. Last Friday the Council kicked off its deep-dive into the Mayor’s proposed budget with a presentation on HSD’s plan for 2017-2018. The presentation was led by Council’s central staff (who wrote a memo summarizing HSD’s plan) with HSD Director Catherine Lester and Deputy Director Jason Johnson at the table as well.

The context for the discussion, of course, was the recent release of reports from two consultants, Focus Strategies and Barb Poppe, along with the new Pathways Home plan that sets out to implement much of the consultants’ recommendations. While the Council received a presentation the day the three documents were released, last Friday’s meeting was the first time Council members have engaged in a public discussion on the topic since then, and with time to read and digest the results, they came in armed with questions. Council members Sawant, Herbold, and O’Brien in particular took a highly critical eye to Pathways Home, and asked some hard questions of Lester and Johnson.

Since the reports came out, the most controversial issue raised has been their recommendations that the transitional housing program should be scaled back in favor of deeper investments in other programs, such as “rapid rehousing,” that move people directly into permanent housing. It was no surprise that the loudest complaints came from those with the most to lose: the organizations that currently receive city funds to run transitional housing. At issue is the performance of those program: transitional housing is a very expensive program, with high variability in performance. 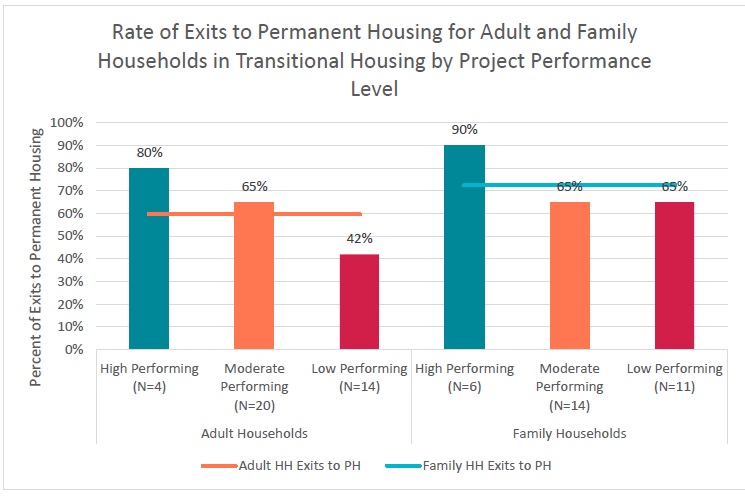 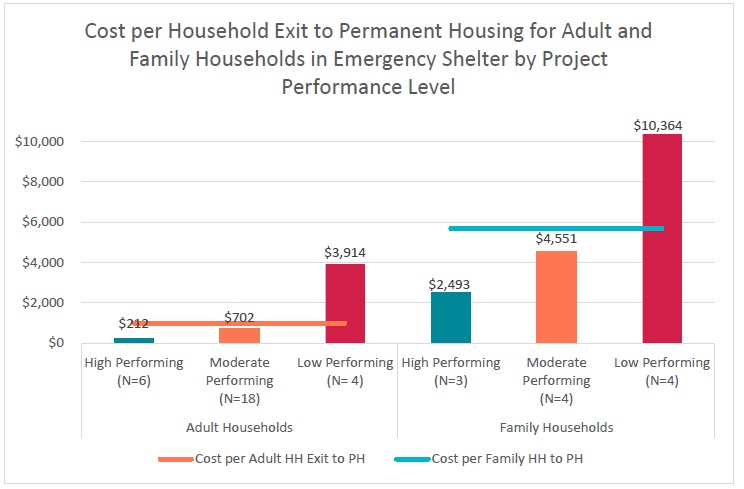 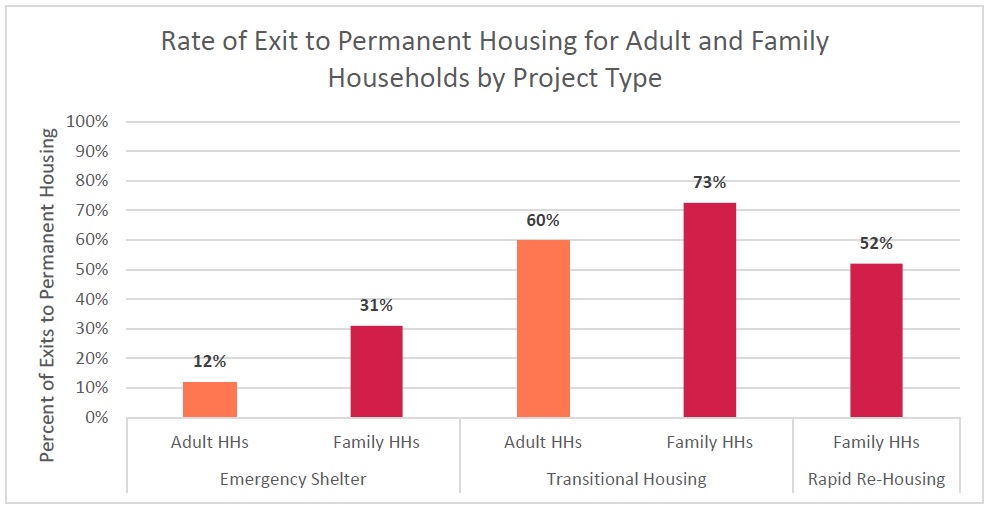 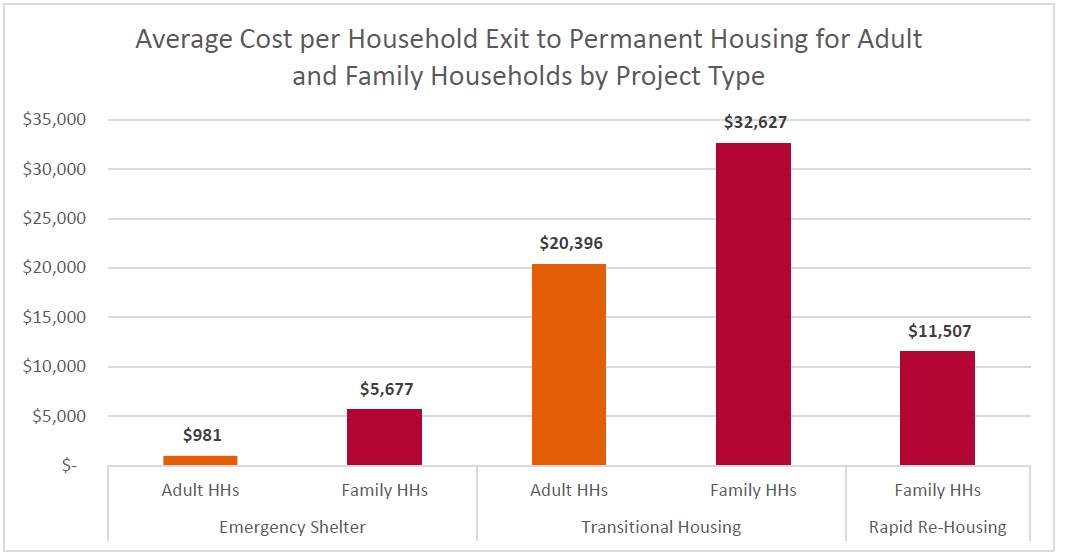 Now, the statistics are hard to parse here, so let’s step through it. Overall, transitional housing has a success rate of 60% for individuals and 73% for families in exits to permanent housing. That’s compared to the success rate of 52% for rapid rehousing.  At that surface level, it certainly looks like it would be a poor idea to move funds from a program with mediocre performance to one with worse performance. But if we look deeper, we see something different.  Here’s a look at the breakout of how individual programs perform: 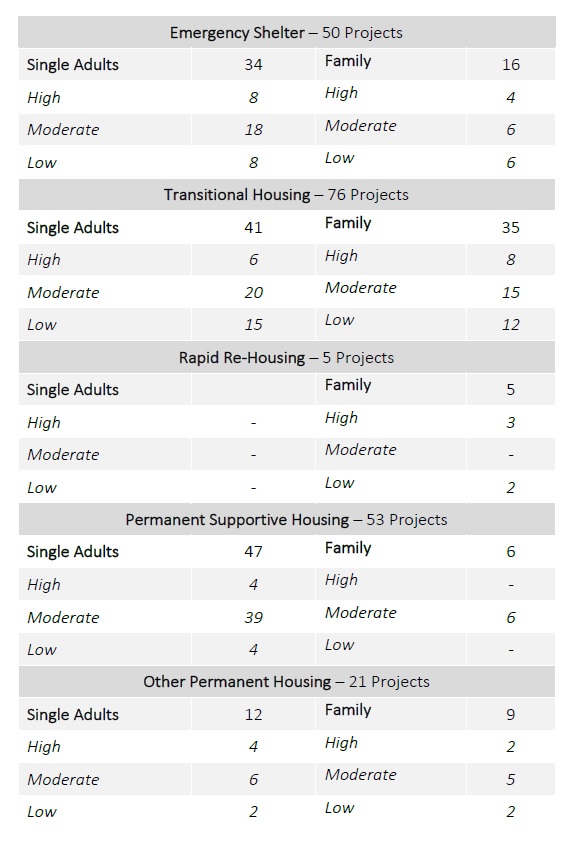 Transitional housing programs, which have been around for many years, for the most part have moderate or low performances. Rapid rehousing, however, is a relatively new program that is still spinning up and suffers from the “law of small numbers” in that there simply aren’t enough RRH programs to know the true success rate, or how they will do once they are more established. But on top of that, the cost of the programs are very different: transitional housing is much more expensive than rapid rehousing. So even if the success rate of rapid rehousing is slightly lower, for the same amount of money you could have 2-3 times as many people in a rapid rehousing program and successfully exit more people into permanent housing.

But as Council members Sawant, O’Brien and Herbold pointed out, framing it as “transitional housing versus rapid rehousing” is not a productive way to look at it. The programs aren’t interchangeable; they address people with different needs. The Council members used HUD documents to reinforce this point and assert that Seattle needs a portfolio of programs so that we can tailor response to what the people who are homeless need, rather than trying to fit everyone into a one-size-fits-all program. Lester largely agreed, noting that the Pathways Home program doesn’t argue for moving away from transitional housing. Rather, she said, it pushes for more rigorous performance evaluations of all programs and cutting back on the ones that are low performing.  That led the three Council members to push harder on the exact criteria that would be used to rate providers.  It also prompted Council member Juarez, always the champion for District 5, to raise her concern that the north end of the city already had a disproportionately low number of service providers, and that her “nightmare scenario” was that in two years the few providers their would be found to be “low performing” and their funding would be cut. She pushed Lester and Johnson hard to ensure that the shifts they do make over time don’t cause or increase geographic disparities in the city.

Sawant also raised another concern with the Poppe/Focus recommendation: that it doesn’t factor in the high cost of housing in Seattle. She pointed to a report that showed that San Francisco’s rapid rehousing program was placing some people up to 60 miles away from their workplace in order to find affordable housing.

The Council members raised some valid critiques, or at the very least some hard questions that need to be answered. And as O’Brien pointed out, the timing of the release of the reports and the Pathways Home plan is poor, since there isn’t sufficient time to fully evaluate the plan before the budget needs to be finalized. Lester and Johnson admitted too that many pieces of the plan aren’t “baked” yet, which raises many questions about the accuracy of their budget requests. If the reports and plan had come out in early summer instead of September, as originally planned, the current conversation would be very different.

But there is one more aspect of the conversation that is worrisome, and it relates to one of the key recommendations from the Poppe report: that the city needs to shift from a provider-driven system to a funder-driven system. Today the system is driven by individual contracts with service providers, with little coordination across those providers. They also have significant say into how the system is organized and how funding is prioritized, particularly funding routed through All Home. But as HSD moves to change that power structure by implementing more rigorous metrics, performance evaluations, and competitive bidding, the providers are responding by looking to Council members to advocate for them. It has begun already with the transitional housing providers, but that’s just the start. O’Brien took it further by asserting that the providers are the ones who “know what works” and that he wants to make sure that they are part of identifying solutions going forward. That’s the first step in subverting the move to a funder-driven system. Yes, service providers do have important context, but their funding is on the line and the advice they give will absolutely be colored by their own interests. It’s important that HSD have the ability to make decisions that are in the best interests of homeless people, and not necessarily in the best interests of individual homeless providers.

Council member Herbold, for her part, expressed resistance to rapid shifts in funding, advocating instead for testing program first before making reductions in services — a move that will further slow down the city’s already plodding pace of response to the homeless crisis. That protects existing providers, but it fails to acknowledge that overall what the city is doing now isn’t achieving the desired results and pushes out necessary changes even further.  Yes, Seattle’s high cost of housing needs to be factored into the plans, but that doesn’t mean we can’t take lessons from other cities with high housing costs — and there are several. It’s ironic to hear Council members Sawant and Herbold, who in the secure scheduling debate argued that Seattle isn’t particularly unique, now arguing the other side.

It will be interesting to see what approach the Council takes to the HSD budget. There clearly isn’t consensus on the underlying validity of the Pathways Home plan, and even if there was, the implementation details for some of the components are either sketchy or nonexistent. Often in these cases the Council will set aside money, but lock it up with a proviso until the department comes back with a detailed plan. It would not at all be surprising to see them use that tool to rein in HSD’s homeless plan until it can be thoroughly talked through.

Unfortunately, that means even more implementation delays for the homeless response. And winter is coming.

You can watch the Budget Committee presentation on HSD’s homeless plan here.