Budget chair Tim Burgess’s plan for this year was to use two rounds of discussion to build most of the 2017-2018 budget by consensus, leaving today’s meeting to hash out whatever controversies remain. That is exactly how it played out, and even today’s meeting had few major conflicts.

All of the Statements of Legislative Intent were handled in a single vote; the council member decided not to pull any out for separate consideration. The same held true for the legislative items, which left only the budget changes that moved money around. Six of 103 were pulled out for separate consideration, and eleven more were added this morning — some of which were revisions or re-submissions of items that had failed to make the consensus “balancing package.”  And of those, only five created division among the Council members.

The most heated topic, as well as the most anticipated one, was using bond funding to build more affordable housing. There were two competing proposals: Council member Sawant’s for $145 million of bond debt as well as stripping all $15 million from the re-planning effort for SPD’s North Precinct police station; and Council member Herbold’s more moderate version that only issues $29 million in debt and takes just $3 million from the North Precinct project. 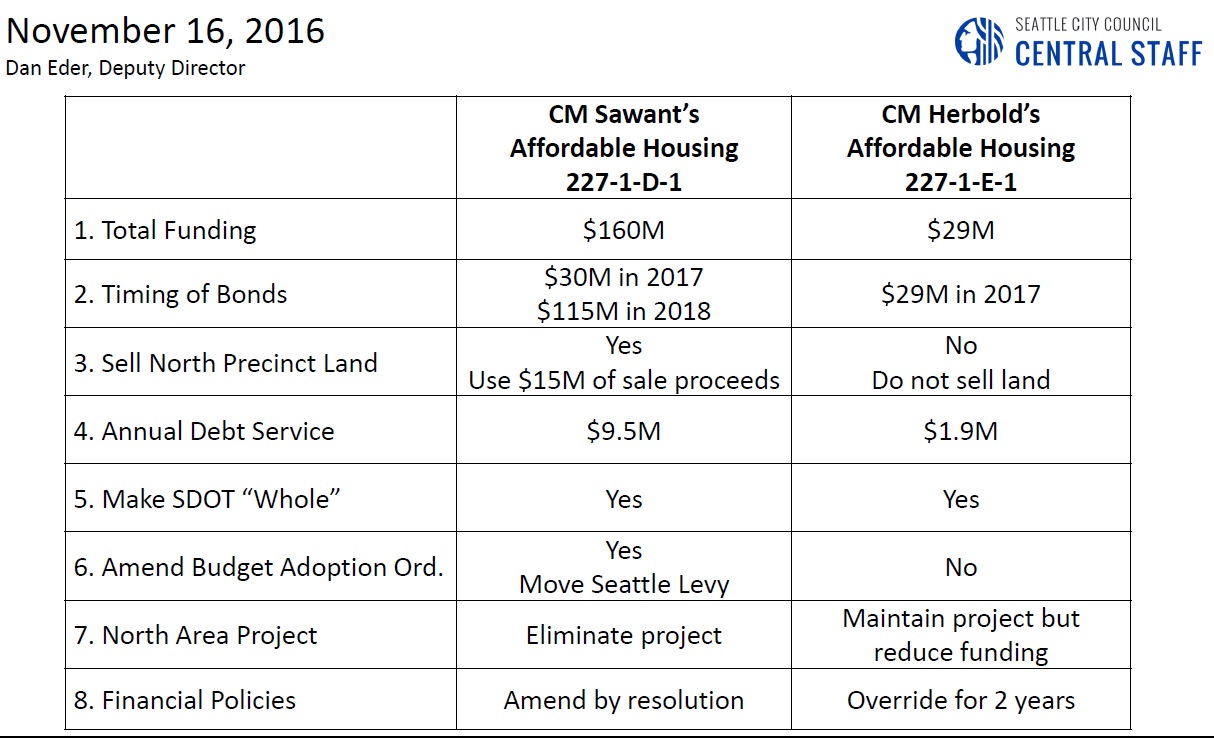 Despite Sawant’s fiery speech and the litany of her supporters who spoke at the public comment session, her proposal failed quickly with only Council member O’Brien and herself voting in favor of it. But Council member Herbold’s went the other way: lengthy debate over whether the housing and homelessness crisis justified a fiscally risky maneuver, and a 7-2 vote in favor (Burgess and Juarez voted no). In the run-up to today’s vote, Herbold and some of her colleagues had sent a response to City Budget Director Ben Noble’s criticism of the proposal, and Herbold also sent a memo to her colleagues making her case.  Amusingly, Sawant still declared it a “major victory” for her movement (and lied about her colleagues proposing debt financing for the North Precinct; that was the Mayor’s plan, and the Council never addressed it).

However, Herbold’s separate proposal to make the Office of Labor Standards self-funding through a new regulatory fee on businesses failed to gain enough support from her colleagues. Council member Johnson was generally supportive but in the face of opposition from the business community he wanted to see a collaborative process like Herbold and Gonzalez used for the secure scheduling legislation. Council member Juarez took a more critical eye, voicing her skepticism that it would stand up to legal scrutiny. The proposal failed 4-5, with Herbold, Gonzalez, O’Brien and Sawant in the minority.

Herbold did better with her proposals to back-fill funding for seven providers of transitional housing in the face of a loss of federal funding for them. This was a complicated discussion, with one thread about the process the Human Services Department uses to prioritize programs for its federal McKinney-Bento grant application, and another part around how best to ensure a smooth transition from today’s portfolio of providers to next year’s strategy that shifts emphasis (and funding) from low-performing transitional housing to rapid rehousing.  Several Council members voiced concerns, but in the end Herbold’s proposal unanimously passed.

Unnoticed by many, two proposals related to the troubled bike share system quietly passed as part of the large package of proposals today. The first prevents all spending on the current bike share system after March 31, 2017, and prevents any spending on expansion at all until SDOT brings a proposal back to the Council and gains its approval. The second cuts funding for the existing system, virtually ensuring its shutdown. No Council members — not even O’Brien or Johnson — asked to even have them considered separately. That’s a clear sign that the Council has soured on the bike share system, which is not surprising after continued revelations of underperformance.

Here’s the memo listing all the changes that were up for consideration today. Nearly all of them were approved. A few items were held until the Monday morning budget committee meeting, when any last-minute amendments will be considered and the committee will take its final vote on the budget — followed by a vote in the Monday afternoon full Council meeting to officially adopt the budget.

The Council members overall seemed very satisfied with how the budget process went this year, and were very complimentary of Burgess’s leadership and the Council central staff’s dedicated work in shepherding the process through.