It’s looking increasingly like Seattle will greet the new year with a major cold snap, with highs around freezing and dropping to the low 20’s overnight. But the long-term outlook suggests we might see more of the same before spring arrives. 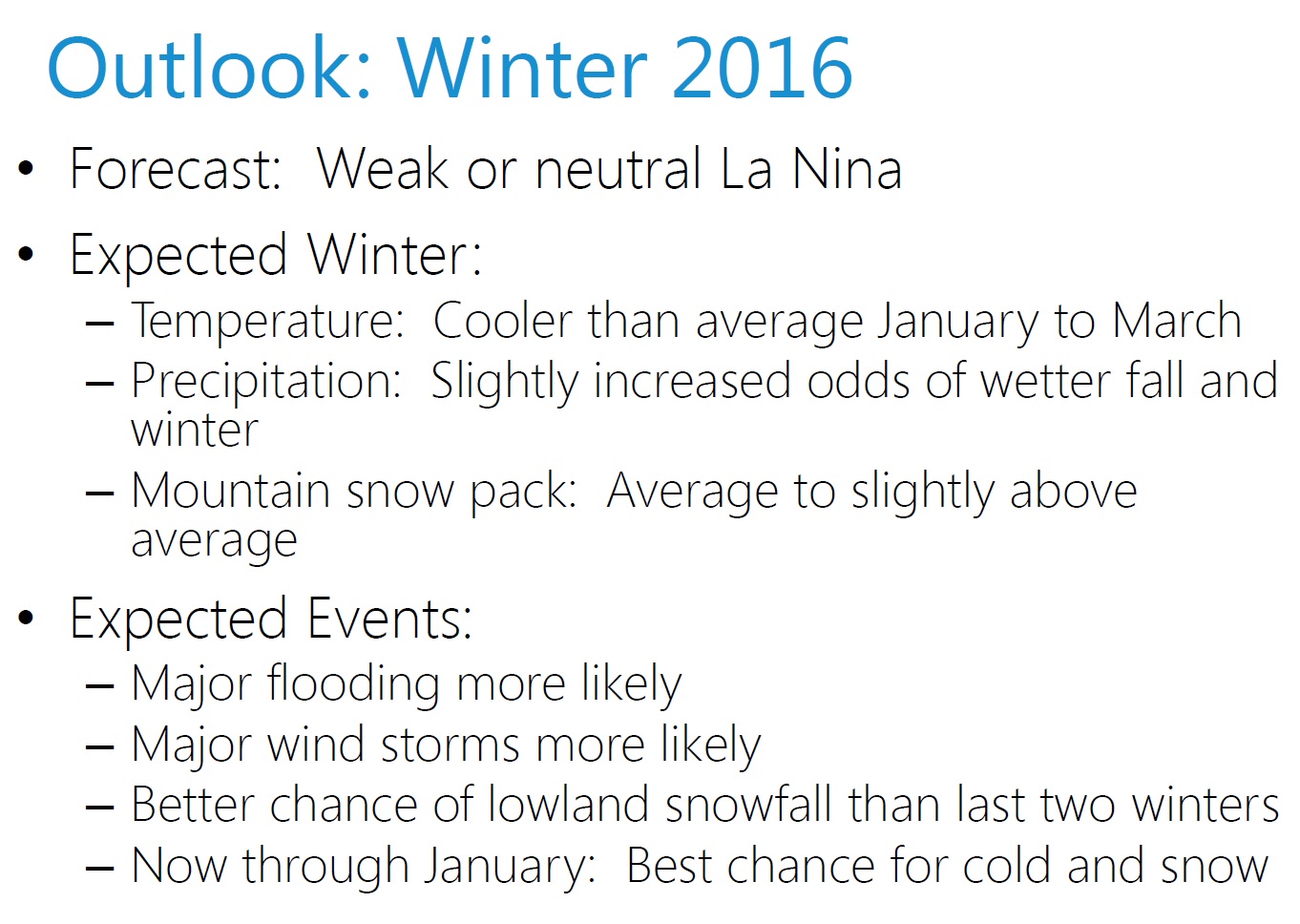 Before the Council began its holiday recess, it received a briefing from several city departments on their preparations for winter weather as well as the outreach and messages to the city’s residents.

At the end of this post is a list of the best ways to get information and report problems during a severe weather event, as well as information on how you can prepare in advance.

Graff explained that her department meets on a regular twice-monthly schedule with all the department heads, but in the case of an expected major weather event (snow, cold weather, flooding, landslides, windstorms, or any combination of these) she gathers department personnel on a conference call with representatives of the local office of the National Weather Service; they then make a recommendation to the Mayor as to whether to open up the city’s Emergency Operations Center to provide inter-departmental coordination during and in the aftermath of the weather event. 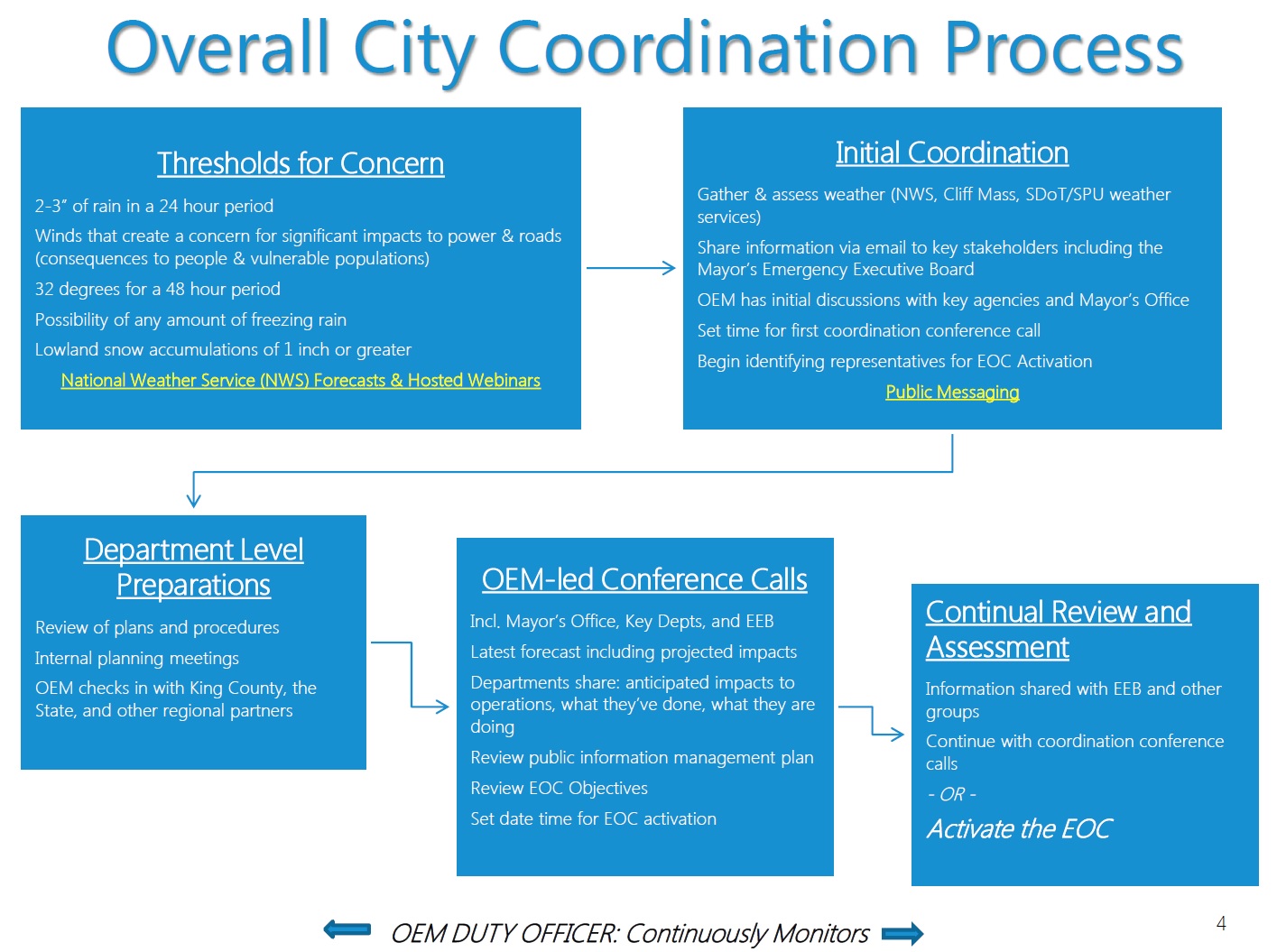 Scott Kubly, Director of SDOT, reviewed the equipment that the department has for managing snow and ice on city streets. SDOT has 40 combination plows/spreaders, 10 trucks that spread de-icing liquid, and 20 newly-acquired light-duty plows — as they were replacing vehicles in their fleet, they purchased plow-ready trucks that could be used as necessary for spot response. SDOT does not have the resources to plow every street in the city, but has mapped out “emerald” and “gold” routes. Gold routes are plowed “curb to curb” within twelve hours of a storm, while emerald routes have one lane cleared. All bus transit routes in the city are either gold or emerald — which enables public transportation to keep more cars off the streets. 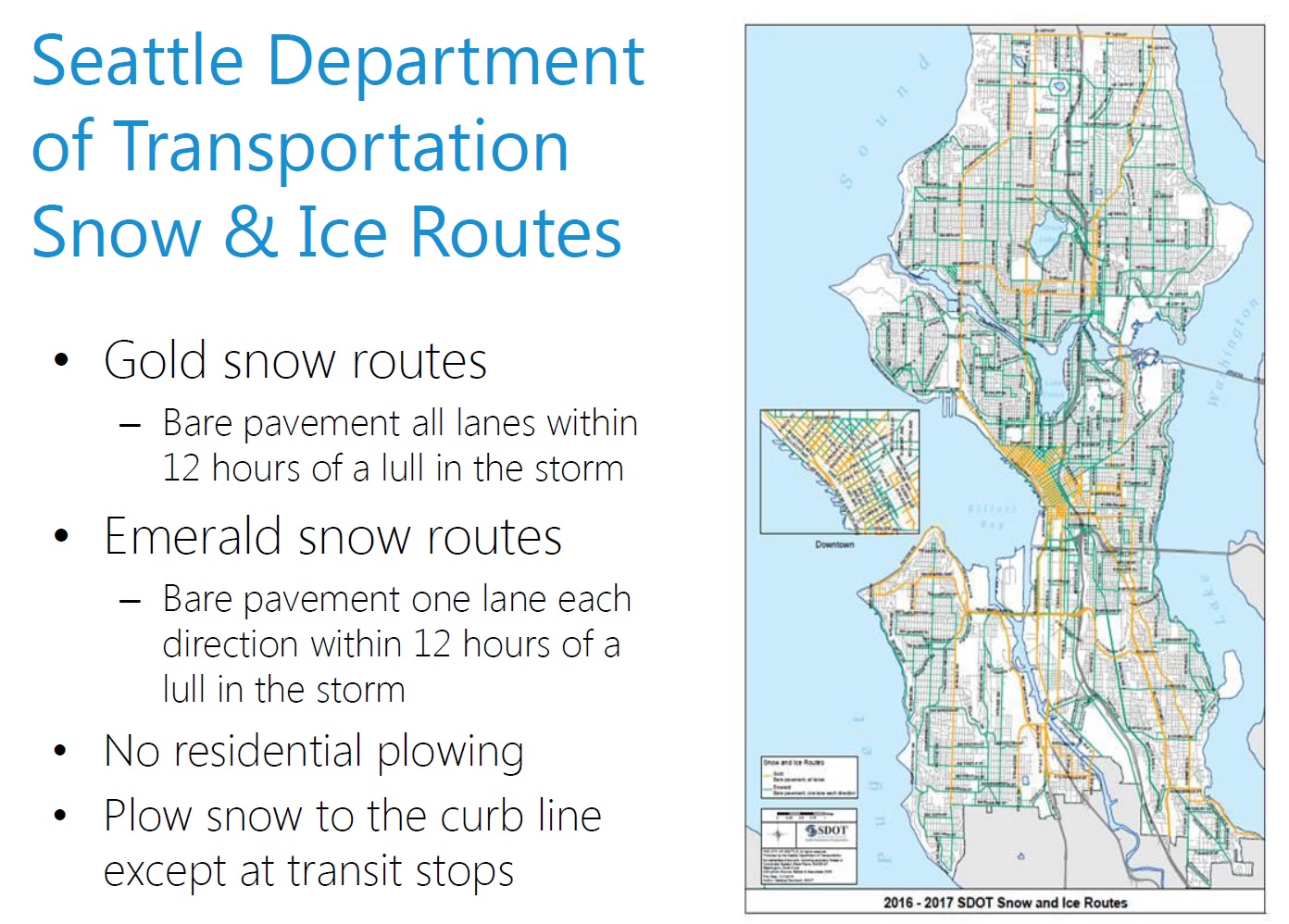 Kubly noted that the city doesn’t yet have a plan for protected bike lanes, but is looking into a new standard to address that as well as what kind of snow removal equipment will fit into protected bike lanes. He also noted that the city starts spreading de-icer before the storm, and has switched from sand to salt to improve effectiveness, but doesn’t go out too early because they don’t want the salt to get washed away if it isn’t cold and dry before the storm.

Seattle City Light can field about 60 crews to deal with power outages and downed lines, and can also draw additional crews from partner utilities across the United States and Canada. Their highest priority is safety; if there are downed wires, they will be made safe first, though they may not be repaired until later. After safety issues, their next priority is restoring power to critical facilities that the community relies upon to respond in a disaster, such as hospitals.

HSD’s main responsibility in severe weather is expanding the overnight shelter capability for homeless people. They add an additional 100 beds at the Seattle Center in a pop-up “no barriers” shelter. In addition, King County may add an additional 50 beds at the downtown King County Administration building. HSD uses the Salvation Army to manage its severe weather shelters, and it sends outreach teams to unsanctioned encampments to encourage people to move to an emergency shelter.  HSD also monitors access to essential services for seniors, people with disabilities, and others among the city’s most vulnerable; they check on providers to ensure that they are able to deliver their critical services.  SPD provides a van to transport people; when pointed out by Council President Harrell that asking homeless people to get into an SPD van is not the best choice, HSD’s Jason Johnson explained that other public and private organizations also provide transportation for homeless people trying to get to a shelter.

All the city’s departments try to communicate the same key message out to residents: 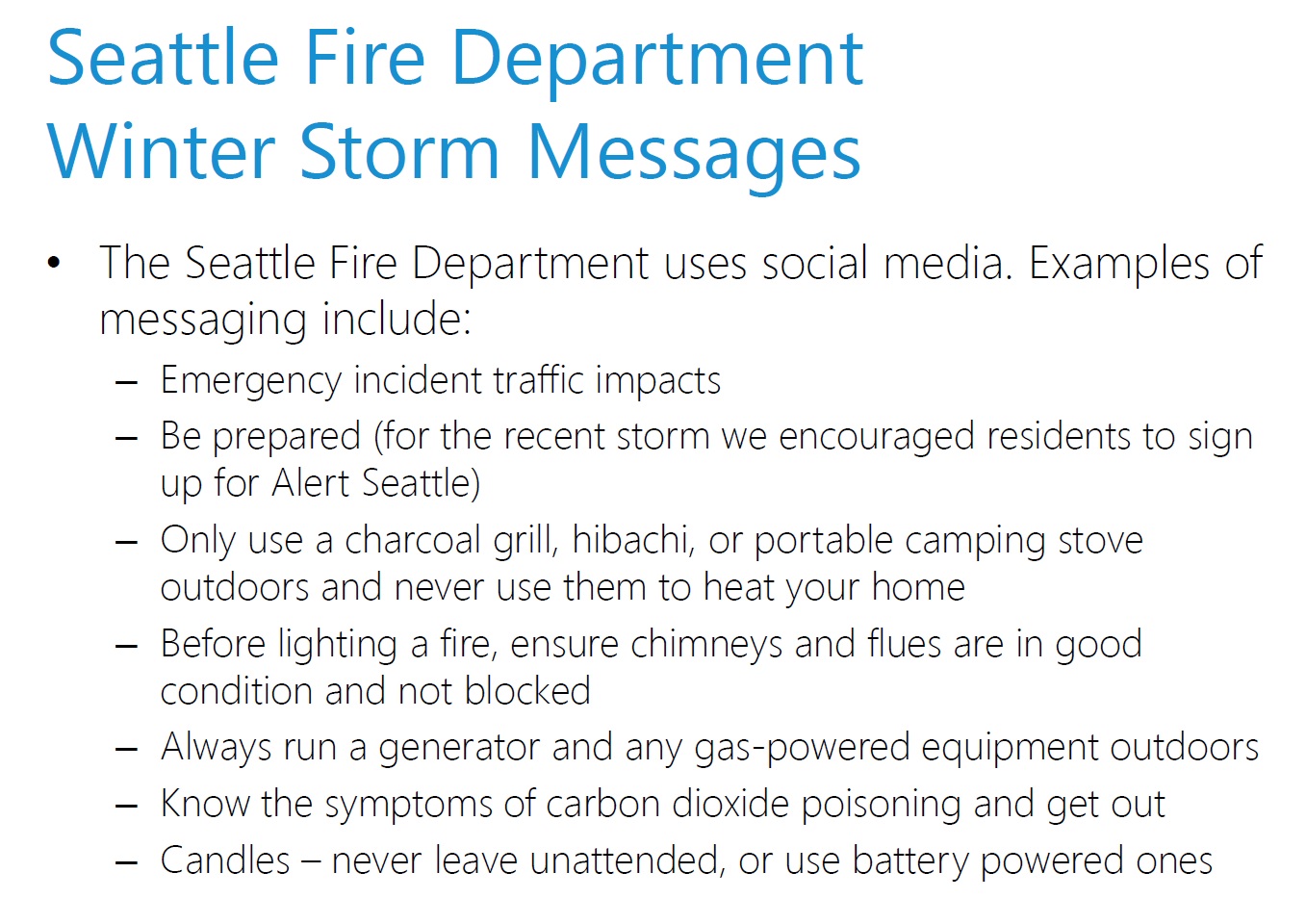 The city makes several resources available for real-time information during severe weather.  They include:

With next week’s weather coming in, it’s worth taking time over the next few days to make sure you’re prepared.